What was it that impelled them – and many others – to join in this adventure? The canoe, of course, is a symbol of Canada like no other. It occupies a special place in our history and in our hearts. A voyageur canoe graced the silver dollar for over fifty years until it was replaced by the beloved loonie. More playfully, one of Canada’s greatest writers, Pierre Berton, reputedly said that, “A Canadian is someone who knows how to make love in a canoe.” Fortunately this adage was never tested on any of the Chasse-Galerie trips. 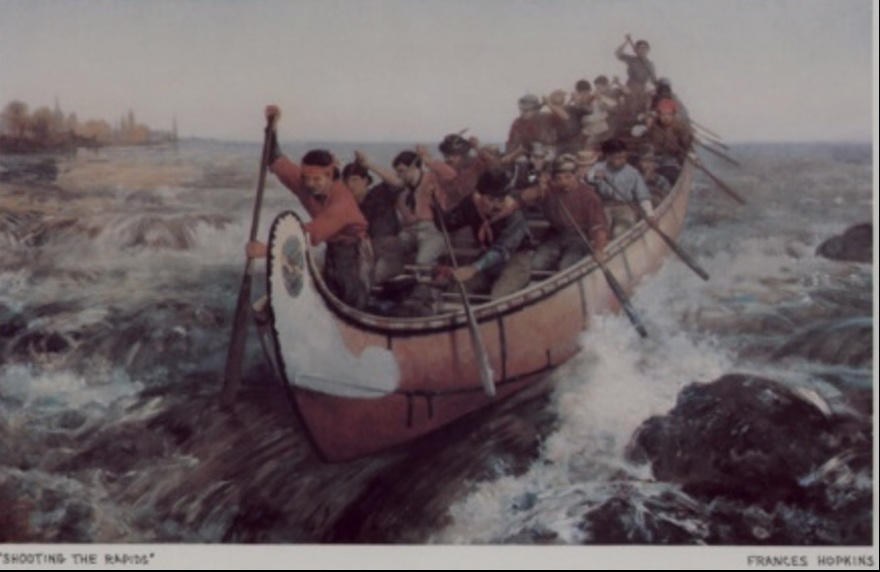 La Chasse-Galerie is an old Quebec legend about a flying canoe. It may date back even further to a medieval French tale of Sieur de Gallery, who was condemned to fly forever through the night skies as punishment for hunting on the Sabbath. Or perhaps it came from the north European legend of the Wild Hunt, which later inspired the song “Ghost Riders in the Sky.” In the Quebec version, a group of lumbermen in a distant camp make a deal with the devil to fly them to their loved ones on the Saint Lawrence in time for New Year’s Eve. The catch is that they have to fly back to camp before sunrise. The men are forbidden to touch church steeples along the way or to pray to the Lord. The devil knows that they will get drunk and then he will own their souls forever. All but one returned safely.

The legend lives on in many ways. Unibroue of Chambly, Quebec (now owned by Sleeman,) brews a distinctively strong beer called “Maudite.” In vivid reds and yellows, the label depicts a canoe filled with desperate men flying over a town on the Saint Lawrence. With Sleeman’s permission, we adopted this image for the trip logo and ungrammatically called ourselves Maudites – the damned. Perhaps this was an overly robust epithet but, then, so is the beer.

The birchbark canoe originated with Canada’s First Nations and was quickly adapted by French voyageurs for use in the fur trade. Across the country they paddled from dawn until dusk, carried huge loads on portages and stopped only for brief “pipes” and at night to sleep, eat and repair the canoe. While paying homage to our stalwart forbears, we preferred to follow the motto “No portages, no pemmican.” A sturdy fibreglass canoe carried us through the locks of the Rideau Canal from one pleasant inn to another. Nevertheless, about 100,000 paddle strokes are required to traverse the 202 km length of the canal.

The Rideau Canal was built by hundreds of labourers under the direction of Colonel John By of the Royal Engineers. It follows the Rideau and Cataraqui watersheds through the traditional territory of the Algonquin, Anishinaabeg and Haudenosaunee Peoples. Completed in 1832, it is the oldest continuously operated canal system in North America. Although it was never used for its original military purpose, it is today a UNESCO World Heritage Site and one of Canada’s premier tourist attractions. To paddle past the ancient masonry in the fall – when the trees change colour, the birds fly south and the air has a wintry feel – is an unforgettable experience.

For RMC Ex-Cadets in particular, the canal holds a special attraction. Under the shadow of Fort Henry, the Royal Military College of Canada guards the southern entrance of the canal at Kingston. Founded in 1876, just nine years after Canada’s Confederation, the college has trained officers for the Armed Forces to the present day. Beside the canal stands the Memorial Arch, which honours graduates who have died in military service to Canada. The most moving part of the canoe trip occurs when the crew has at last reached RMC at the end of the week-long voyage. They turn to face the Arch, to remember those who have passed before and to salute the Commandant and cadets onshore.

The better way to paddle the Rideau is in the opposite direction, from Kingston to Ottawa, with the prevailing southwesterly wind at one’s back. However, the RMC crews have had to take grim satisfaction in paddling against the wind to reach the goal, much as they did when they were cadets.

But if you were to ask the paddlers what they remember best, it would be the good times, the shared week in a big canoe, the feeling of being part of a larger family united by a common experience when most of us were much younger. On the water we told stories, sang songs, made up limericks and listened to the bagpipes, the fiddle and the call of the loon.

Book Review by 12570 Mike Kennedy - The ODYSSEY of ECHO COMPANY