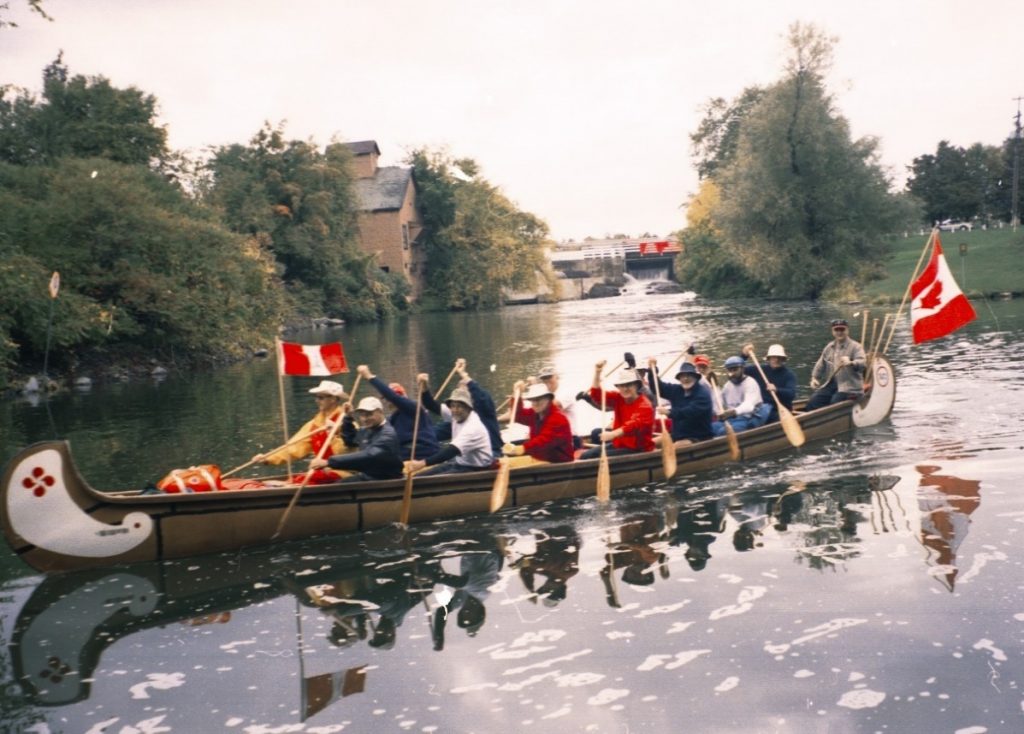 Ten days before the canoe was due to depart Ottawa on the second Chasse-Galerie, I turned on the TV and watched in horror as two planes flew into the World Trade Center. This world-changing event impacted everyone. All flights in North America were cancelled indefinitely. The canoe trip suddenly seemed frivolous and perhaps should be postponed to another year. 8684 BGen Peter Holt, the medic and the only active serviceman on the crew, advised me that all military leave was cancelled and he had to stay on duty.

However, flights resumed a week later and I managed to get the first one out of Victoria. Other than Peter, all the Maudites were ready to go. Donors had pledged at least $57,000 if we completed the trip – double the total of the previous year. My class was having its 30th reunion. So we went ahead with our plans, terrorists be damned.

Unlike the year before, sadly, there was no woman in the canoe. The Ex-Cadet crew met at the Colonel By Museum on Thursday afternoon, 20 September 2001. Peter’s absence meant that we were down one engine and there was no one on the waitlist to fill his place. I wondered how this would affect our cruising speed. However, Don and Dave had returned to occupy the Engine Room at the stern, otherwise known as Economy Row 7. Among the new faces at the Elephant & Castle that evening were Tom Gee and Bruce McAlpine, expert paddlers who would return three more times on future Chasse-Galeries. Jean Boyle, former Commandant of RMC and Chief of Defence Staff, began the tradition of including a retired Commandant/CDS in every crew.

Departure the next morning was a quiet affair, given the sombre public mood. The Deputy CDS, 9267 Vice-Admiral Greg Maddison, had to send his regrets. However, the three services and the Class of 71 were well represented on the saluting dais by 8612 MGen Richard Bastien, Commander of the Air Force, 8833 John Leggat, Assistant Deputy Minister in DND, 8850 Rear-Admiral David Morse, Commandant of RMC, and the erstwhile medic 8684 BGen Peter Holt, an army engineer. Peter had planned to drop off the first aid kit but fate once again intervened. He witnessed a serious accident the night before and used up most the kit in giving first aid.

The trip to Kingston followed the same general plan as in 2000 but there were several innovations, some memorable incidents and the crew, of course, was unique. The two senior members were David, a new recruit to the RMC Old Brigade, and Jay, who would join the following year. Their wives, Penny and Cindy, kindly carried our suitcases to Kingston for us. Both gentlemen distinguished themselves as helmsmen. David dropped his glove in the water and turned the canoe around to retrieve it, for which misdemeanour he generously bought a round of drinks that evening. Jay took a while to learn how to steer. In a narrow channel beyond Merrickville, he bounced off marker buoys to port and starboard, earning him several nicknames such as “Jaystroke,” “Rammin’ Speed,” “Zigzag” and “Crash.” He bore the incident with good humour and brought the legend of La Chasse-Galerie to life.

Larry began a tradition which was maintained on all future trips. All crew members made a donation from their own pockets to the Friends of the Rideau in Merrickville. The men and women of this organization preserve and publicize the heritage of the Rideau Canal. Over the years, the canoe crews have donated over $4,000 to the Friends. Larry also paddled the whole way with a broken rib and, later, a broken toe – the latter the result of a collision at the cottage with a heavy bench, crafted by 2435 Bob Bennett and subsequently cursed by many.

Don, a real doctor from California, filled in as medic but his main job was to be the comedian. He delivered paddling advice to all and sundry in a stream of consciousness and insisted on playing lively tunes on an outsized boom box. As the trip historian, he read a lot of Rideau history and then forgot most of it before he could pass it on. He conspired with fellow pirate, Dave, in the stern to stop paddling now and then to see if anyone noticed. On the inaugural trip, Lady Di christened him the “Rideau Prowler” after passing a boat of the same name. She remembered him saying, “the best things in life aren’t things.” Don also supplied the rum, made the T-shirts and lapel pins, and was a generous supporter of RMC hockey and athletics in general.

His mate, Dave, was a retired Navy Captain and former Royal Roads Commandant. With his black beard, blue bandana, fake eyepatch and mutinous behavior, he played the part of pirate to a tee. However, he drank light beer and went for a run every day, something that real pirates would never do. His wife, Pam, produced personalized coffee mugs for the crew.

Mike, an unflappable Navy Commander, also looked authentic with a beard and pipe. Ron, or “Rhodie the Bartender,” made the beer and served it. Unfailingly good-humoured, he also earned respect as a paddler for his strong shoulders. Peter, or “Shirley, you jest,” looked after the flags and lampooned “Bennett’s Boutonnières” in a fine baritone voice. Tom, the “Gentle Giant,” cracked one-liners all the way but redeemed himself, as the bourgeois’s “century” by buying not just one, but two rounds of beer for the crew. Bruce “The Cook” and cappuccino maker was the “Can Do Van Doo” in a snappy red and white apron.

The youngest was Scott, who promised to bring bagpipes but didn’t. He was required to wear a harmonica around his neck for the duration of the trip and play it. He shared the coffee boy and bottlewasher duties with Jean and Larry but his main job as “Mr. Logistically Challenged” was to leave things behind and to bear all abuse with sunny good humour.

In addition to his duties as scribe and photographer, Tom Gee followed his instincts and began to look after the canoe. This made him a natural for the bosun job on later trips. Early one morning at the cottage on the Big Rideau he discovered that three dozen frogs had jumped into the canoe from the dock. No doubt they were surprised to find themselves trapped in a strange new world. Tom gently dropped them over the side and mopped up the canoe.

The accommodation issues at Manotick and the Big Rideau were solved on the 2001 trip by using tents to handle the overflow. Thus everyone was able to spend the night in the same location. Breakfasts were a staged affair but still lavish. 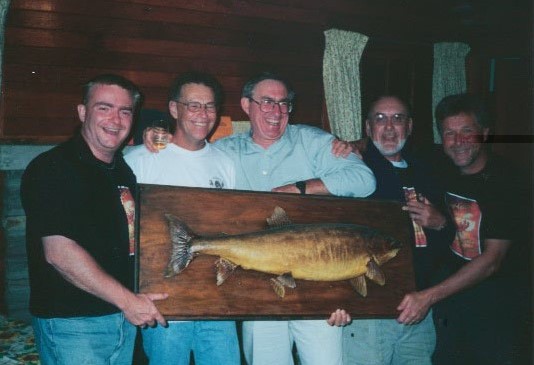 Scott Don Ron Mike and Bruce at the Opinicon

It rained most of the way on this trip and the winds were often contrary. However, the loss of one paddler didn’t seem to affect the cruising speed. Finally, at Kingston Mills on the last day, a well-known lady Ex-Cadet filled that fifteenth seat: 17324 Sharon Donnelly, an Olympic triathlete and Pan Am gold medallist. She had dropped in to Melody Lodge the night before for dinner, along with RMC Commandant David Morse and Peter Dawe.

The salute at the Arch and the feeling of accomplishment were just as moving the second time. Rhodie dumped me in the water in recognition of his lifesaving lessons while we were cadets. On subsequent trips, I firmly insisted that this should not become a tradition. That night at the Legacy Dinner, I asked David Younger, the top fundraiser, to present the RMC Club with the paddle that Sharon used – emblazoned on the blade with $57,158. This was twice the previous trip total – and half of the donations came from the Class of 71. My class was not only celebrating its 30th Reunion but, along with the rest of the crew, could now take pride in a new sense of mission. 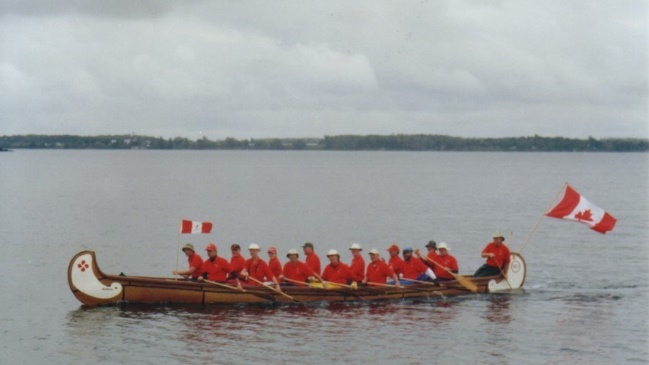 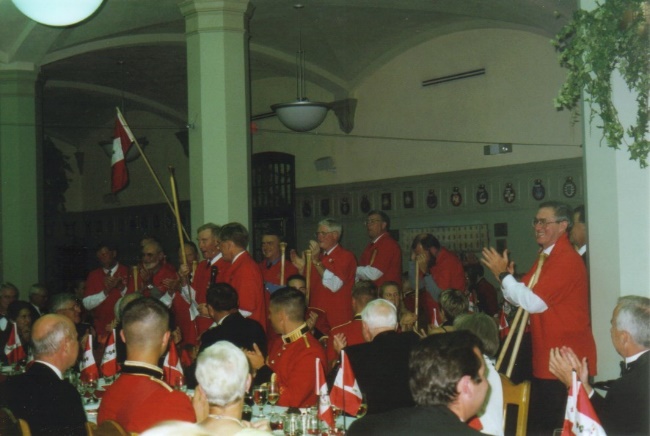 Though Mike enjoyed paddling the best,
For him it weren’t much of a test,
On his pipe he did puff,
Drank beer and did snuff,
Ignoring the engine room jests.

While another helmsman named Jay
Zig zagged in his own special way.
When a buoy came in sight,
He hit it dead right
With the “jay” stroke he’d perfected that day

For there once was a voyageur canoe
With fourteen old cadets as its crew
And in seven short days
By locks and through waves
From Ottawa to Kingston it “flew!” 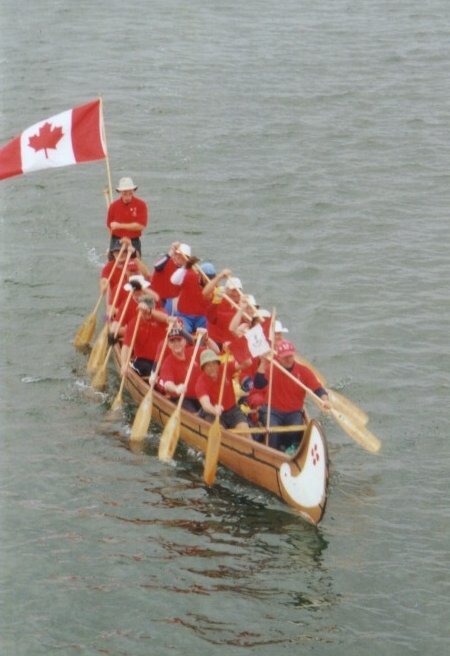 The History of La Chasse-Galerie: