Above: Lieutenant General Henry E. Emerson as a major general.

In the case to be shared the executive leader was a major general commanding a forward deployed U. S. infantry division in Korea.  The junior leader was one of the several 1st lieutenants on division staff, a rarity at division level where most staff officers are majors and lieutenant colonels.  The lieutenant was the newly assigned aide-de-camp to the assistant division commander for maneuver, a brigadier general.

The mentoring situation developed around a commander-perceived need in the unique disposition of the division and its mission in Korea at the time for a ranger company.  Such a unit was not part of the division’s table of organization at the time.  The commanding general’s experience in combat in Korea as an infantry company commander and experience in Viet Nam as an infantry battalion and brigade commander, as well as his aviation experience (he was a rated Army pilot) had convinced him that a ranger company would be a significant combat multiplier for the division.  It would provide an enhanced capability for deep raids and intelligence gathering patrols in the broken mountainous Korean terrain. This would be a significant enhancement to division tactical and operational capabilities.

This concept, with proper justification, might at least be possible and feasible to implement as a provisional unit with division and possibly other I Corps and 8th Army assets if supported by the senior commands to the divison.  A first step would be a proposed table of organization and equipment (TO&E) for such a company with attendant justification that could be used as a basis for discussion with higher commanders.

The project to develop the TO&E was the basis for the mentoring experience that followed.

An infantry 1st lieutenant was acting commander of his rifle company at a battalion division retreat parade at the parade ground and flag pole opposite the 2nd Division Headquarters at Camp Casey, Republic of Korea.  The lieutenant was the senior rifle platoon leader in the company and was completing his sixth month in country.  At the time, manning levels in the division did not authorize a company executive officer.  In the absence of the commander, the senior lieutenant in the company was assigned as acting commander for the formation.

As the retreat parade concluded, the acting company commander was turning the company over to the company first sergeant for return to barracks at Camp Hovey, a two mile march from the parade ground, when the battalion adjutant approached him.  The adjutant informed the lieutenant that he was to report immediately to the Assistant Division Commander for Maneuver’s (ADC(M)) office to be interviewed as a possible replacement for the departing aide-de-camp. 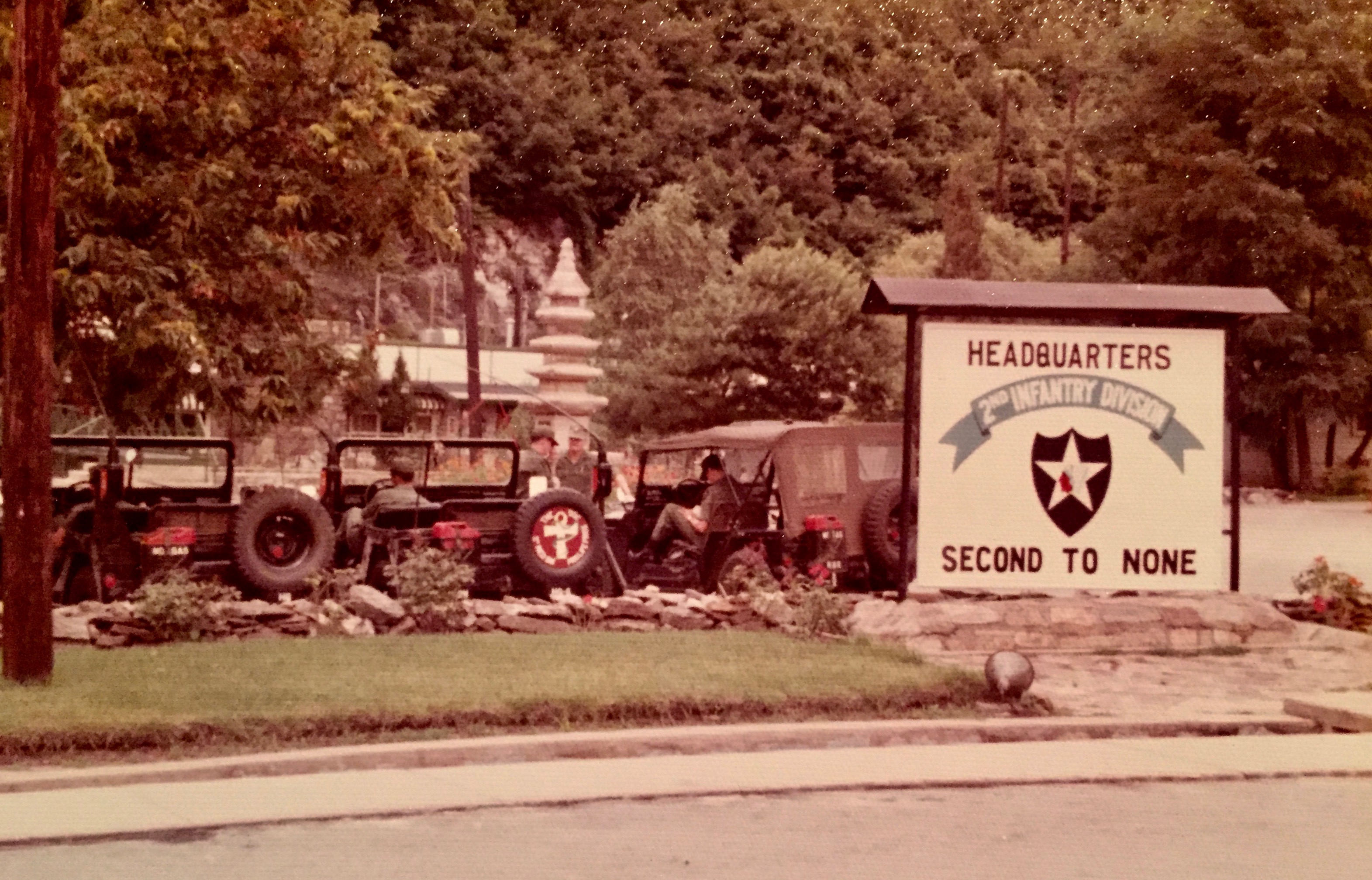 The Assistant Division Commander for Support’s (ADC(S)) office, also a brigadier general,  occupied the other half of that end of the headquarters building in an adjacent office to the ADC(M)’s office.  The commanding general’s office, a major general, was down the hall, past the chief-of-staff’s office and the division headquarters reception area administered by the secretary of the general staff and the division protocol officer, at the other end of the building.

The commanding general was only a few months into his command tour.  One early policy change on his assumption of command was to include the lieutenants on the general staff in the headquarters, the two ADC’s aides and the division protocol officer, as members of the Commanding General’s Mess, a membership that had only included previously the field grade officers of the division general staff.

Through this society, the ADC aides came in contact with the commanding general at meals when in garrison.  Over the initial weeks in his new assignment, the aide was introduced to the division’s still new commanding general, Major General Henry E. Emerson, the “Gunfighter” a legendary Army combat leader.  Over several weeks in the mess and around the headquarters the lieutenant and General Emerson did engage in conversation enough to become socially and professionally acquainted.

Several weeks after the new aide had assumed his duties, General Emerson summoned the new aide to his office.  He outlined an interest in examining the organization of a ranger company in the division and underscored his reasoning for doing so.  At the time, rangers were not consolidated into a single regiment but organized across the field army in separate companies aligned with division or corps commands. 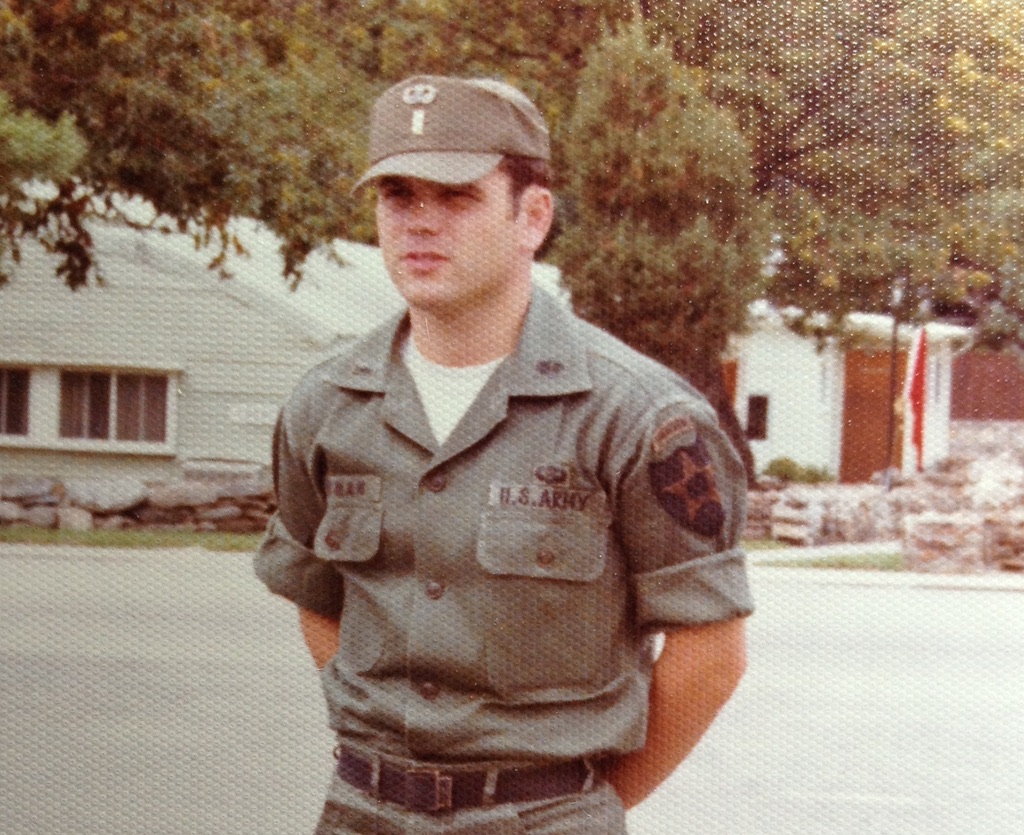 1st Lieutenant T. Rozman at 2nd Infantry Division Headquarters at the time of the assignment.

General Emerson stated that he wanted the lieutenant, as part of this effort, to develop a TO&E for a divisional ranger company.   This was a remarkable demonstration of confidence in a junior officer by an executive senior officer and division commander.

The lieutenant immediately went to work.  A graduate of the U.S. Army Ranger School over three and a half years earlier, he tapped into several officers that had ranger unit experience and obtained existing information on current tables of organization and other related material as well as situational material addressing guidance received  from the general.

From study, analysis, and discussion, the lieutenant developed a preliminary proposed TO&E.  Essentially it was intended as a “straw man” organization to form provisionally and evaluate its capabilities and refine its organization through an extensive training and operating program.  The unit once formed would be constantly operating against scenarios designed to meet the intended forward raid and patrol scenarios envisioned by General Emerson working effectively with identified I Corps assets, the division’s G-2 (Intelligence Officer), G-3 (Operations Officer), cavalry squadron, and aviation battalion.

General Emerson left the lieutenant a great deal of room on the project but was available to discuss the developing ranger company organization against his concept.  The interfaces were always conducted as two professionals exchanging information objectively, the general never assuming a tone of superior position or condescension.  As well, the lieutenant understood not to abuse his access to the general or assume undue familiarity.

The result was a progress on the project that produced a useable product within several weeks.  It proved a superb learning experience for the lieutenant in form of an assigned staff project and how to use available resources.

But most critically, the project was a primer on how to work to good effect with a general officer as a junior officer.  General Emerson was an excellent mentor and the lieutenant gained a great deal of perspective.  This perspective would serve him and the Army well in significant future project work assignments with general officer oversight at division, Department of the Army and U.S. Army Training and Doctrine Command levels.

Several parallel initiatives that General Emerson was pursuing to heighten the division’s combat effectiveness by aggressive integration of aviation assets into maneuver and fires operations of the division that the lieutenant was deeply engaged with as the ADC(M)’s aide, added significantly to the lieutenant’s professional development technically and as a leader.  The innovative approaches General Emerson was taking to heighten and leverage division capabilities with limited resources made a deep impression on the lieutenant. He would apply much that he gained from the experience with general Emerson over the next almost 19 years.  These initiatives informed the lieutenant’s approach to the ranger company TO&E project.

Some weeks before the lieutenant’s rotation back to the U.S., a number of developments made pursuit of provisional activation of a ranger company in the division infeasible.  Regardless, the exercise for the lieutenant was invaluable against future assignments.  He would apply aspects of the thinking in the formation of a detachment from a rifle battalion to support an Army new squad automatic weapon’s test and as a company commander to form a provisional fourth rifle platoon for a non-commissioned officer (NCO) retraining mission (senior sergeants in excess military specialty career fields were offered the opportunity to re-train as infantry NCOs) and the temporary reorganization of a mechanized infantry company with three tank sections under operational control into a Soviet Motorized Rifle Battalion opposing force for an extended major equipment test (Mechanized Infantry Combat Vehicle Developmental/Operational Tests 1 and 2).   All of this work had significant benefit for the Army.

General Emerson’s assignment of the ranger company TO&E project and his mentorship would serve the lieutenant and the Army well over the coming years.  The general’s approach to engaging a junior leader as an executive leader would forever remain in the lieutenant’s mind as an example of how to engage junior leaders as he went forward in his own career.  The general’s legacy in this experience would carry forward in a “positive way” for two decades in the Army and another two decades of the lieutenant’s service as a leader in the civil service of the Commonwealth of Virginia.

Colors of the 2nd Infantry Division