The lives that formed our Forces: A genealogical story from 13987 Lieutenant-Colonel (Ret’d) Bryan Bailey, CD

This past week the group of 28 Officer Cadets, along with faculty members, sat in on group and staff-led presentations providing military and historical context before deployment on the Battlefields of Europe Tour this February.  One of the presenters was 13987 Lieutenant-Colonel (Ret’d) Bryan Bailey, CD, the Executive Director of the RMC Club, who shared the story of his great-uncle, Pvt. Albert Bailey, killed in action during the notoriously bloody Battle of the Somme, WWI.  This story struck the audience in its poignant tie to the past and areas that will be covered during the tour.  The story was as fresh and personal for him and it was for everyone, since he had heard stories about his great-uncle, but could now connect an increased amount of detailed facts to the operation and events that led to his death, as well as learn about the contributions made by Albert Bailey’s unit towards greater success.

Bryan Bailey grew up under the inspiring shadows of a rich family military involvement and tradition: his great grandfather was a North West Mounted Police after the 1885 Rebellion, his great-uncle Albert Bailey’s sacrifice left his name on a cenotaph in Portage, and his Uncle was a CO Officer in an artillery regiment reserve in Vancouver.  Bailey himself followed such prime examples by having a 30-year career with the PPCLI, which began with a BA in Political and Economic Science at Royal Roads and RMC in 1983, and included deployments to Croatia, the D.R. of the Congo, and Kabul, as well as variety of postings and command positions.

On September 26/27, 1916, Private Albert Caston Bailey, 81034, “C” Coy. 5th Bn., Canadian Infantry, age 20, was reported to be KIA and was laid to rest with an honoured memory in the Courcelette British Cemetery, Somme, France.  This young Manitoban soldier started out in the 18th Manitoba Rifles militia regiment, having the title of farmer, a height of 5’10, and weight of 169 lbs to his name when he enlisted in the winter of 1914.  Starting out in the 32nd Reserve Battalion, CEF, he was sent overseas 23rd Feb 1915 to Shorncliffe, England, where in a few short months he attained L/Corp, then Corp by October 1915.  Upon deployment to France he was transferred to the 5th Battalion, where he returned to the rank of Private.  This Battalion would take part in a complex and failed attack on the trenches connecting to the Regina Trench, a controlled “enemy earthwork” in close proximity to the Thiepval fortifications.

The 5th Battalion, CEF, was a Western Calvary unit, which consisted of 44 officers and 1094 other serving members which was a part of  1st Can. Division, 2nd Can. Infantry Brigade.

The German position at Thiepval had been in place by the Württemberg Infantry Regiment 180 for two whole years, and it was this hold that the Canadian Corps planned to overcome, after having relieved the Australians at Pozieres Ridge early September and captured  Courcelette in mid-September.  “The Reserve Army commander, Lieutenant-General Hubert Gough, ordered the attack for 26 September at 12:35 p.m., to push the Germans off the high ground of the Thiepval Ridge, from Courcelette 6,000 yards west to Schwaben Redoubt, by the Canadian Corps and II Corps, each with two divisions in the attack.” They had approximately “230 heavy guns, howitzers, and mortars, with 570 field guns and howitzers” and 8 tanks at their disposal, along with an intensive, preparation of “an intense three-day artillery bombardment,” using in abundance of 100,000 shells and tear gas on the ridge. Under cover of machine gun and mortar, the brigades were to conduct a 100yd/3min, then by 2min, creeping barrage after crossing the open space and the German front.  “Zero hour,” or the start of the attack, “was set for the afternoon instead of dawn, so that consolidation would be done after dark, to avoid exposure to observed artillery fire.”

The month of September was extremely bloody and German causalities numbered 135,000.  Allies losses during this attack were 13,869 excluding Alfred Bailey’s Battalion.  Half of the 5th Battalion were casualties, and 56 were killed, one of which was Bryan Bailey’s great-uncle.  Although the Thiepval Ridge remained in enemy hands, the Allied advances (1,000-2,000 yards) and the extreme losses experienced by the Germans, along with the Canadian Corps’ break-in “enabled the British 11th Division to later outflank Thiepval.” 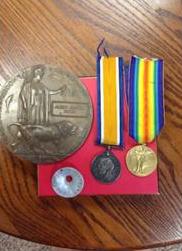 “The photo depicts the WW1 World War One “Death Penny” medallion that every family of a deceased soldier received.  The family also received the British War Medal 1914-20 (left) and the Victory medal (right). His aluminum ID disc (dog tag) bears the 5th Battalion, Canadians.  The ID disc was returned to the family.”

The cause of death for Private Alfred Bailey was likely the result of German sniper or machine gun fire from the exposed left flank as evidenced by a bullet hole in his ID disc. War Diary research suggests that he probably died during the advance to the Hessian trench line, when the casualties were heavier. , Another scenario is that he may have been killed when the 5th Battalion managed to press into the Regina/Stuff trench line. “The operation failed but Private Bailey’s unit achieved a greater degree of success than any other unit in the operation.”

Bailey was impressed with his finds, all of which are now carefully preserved and scanned in their original form and made available in online archives.  These included the operations order for the attack (which demonstrated that there was a far more thorough plan in place than might have been assumed, incorporating full battle drills, reconnaissance, and rehearsals), excerpts from the unit war diaries, the unit operation order, the Official Graves Registration Report circa 1920, and a cemetery plot.

The impact of this presentation on the students preparing for their journey to major battle sites of both world wars was profound; it gave a personalized narrative into the grand historical drama that is warfare, and gave them just a taste of what exactly it will feel like to be at such pivotal grounds, picture the battles in relation to geographical space, and to envision all the singular stories, the special and unique journeys and lives that were either lost or turned into legend, and the lives that could never be fully lived, so that we could each now have our own story, and the freedom to tell it.

This is the first of a series leading up to and the completion of the 2017 Battlefield Tour. Click here to read more on how you can help.