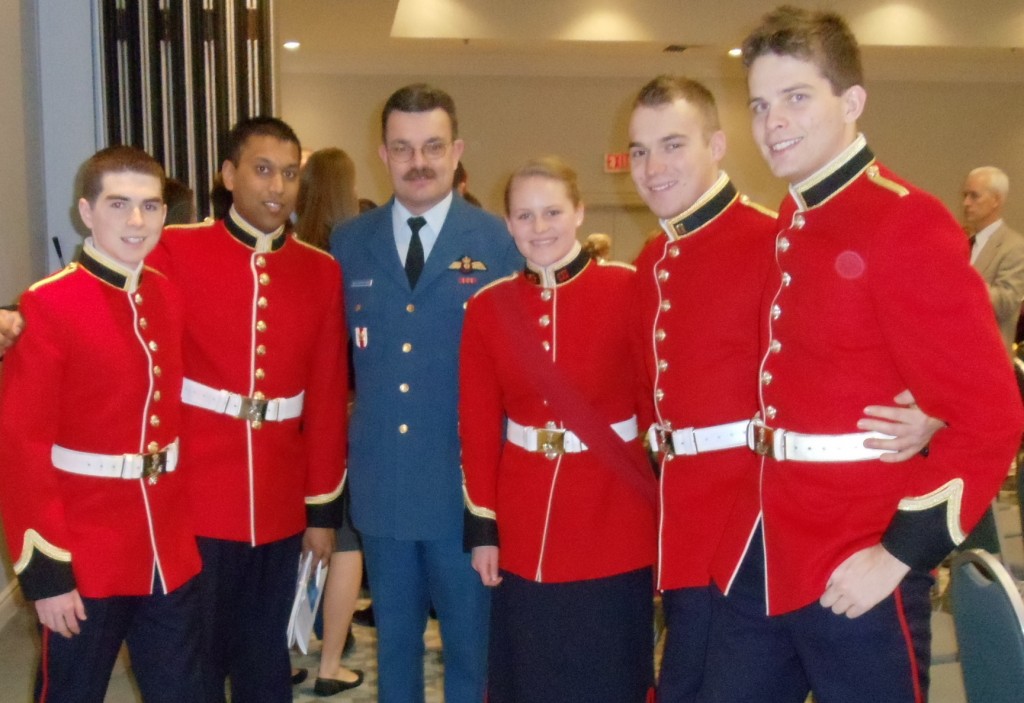 For the third year a row, the Royal Military College of Canada won a staggering number of awards at the 26th Annual Howard University International Model North Atlantic Treaty Organization Conference. The Model NATO Conference held in Washington D.C. is a simulation designed for university students to engage in and garner a better understanding of the purpose, organization, capabilities, and activities of NATO. The event includes a three-day simulation and briefings at the respective embassy of the country the school will be representing. Each university acts in the interests of the foreign policy of a NATO member state and has one delegate on the following committees: North Atlantic Council; Political Affairs; Defence Planning; Nuclear Planning; and Working Group on NATO Operations. In addition to enhancing the knowledge of NATO, the conference is an excellent arena for cadets to network with motivated and well informed university students from North America and Europe.

Due to an outstanding performance at the 2010 Conference, RMC was fortunate enough to represent the United Kingdom. As the UK, RMC won Outstanding Delegation while each individual on the team was recognized within their respective committee. 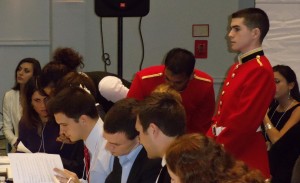 As the team did last year, in Washington the team met Mr. Michael MacMurray for a tour of the Pentagon. Former NATO Operations Director in DASD NATO and European Policy, Mr. David Des Roches, briefed cadets on the international perspective of UK foreign policy and the role that the UK plays in the international community. To top off the brief at the Pentagon, current UK exchange officer, Mr. Richard Johnson, added his own comments to the dynamics of the UK-US and UK-NATO relations. As part of the Conference itself, the team was hosted by the British Embassy for their own briefing on UK policies. The briefings provided the team with an insider’s understanding of the unique American-British relations as well as an American perspective on UK foreign policy.

Having been flagged as the team to beat, the RMC Model NATO team had their work cut out for them. Committee proceedings and draft language communicated the desire of our competitors to see the UK flounder. Ultimately, the leadership, intellect, and charisma of the team put an effective halt to attempts by smaller nations to run the conference. Moreover, on the final day of proceedings, RMC literally dominated the room in a surge of Red Coats, ensuring and enforcing order so that all present worked to pass the Final Communique of the conference. Multiple faculty members and students from various universities in United States, Canada, and abroad noted the passion, intensity, and drive of RMC to see that the conference as a whole was a success. 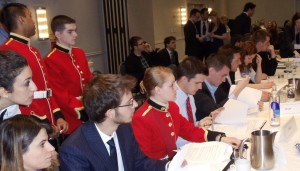 The RMC Model NATO team dominated the competition with eight of the eleven possible awards. RMC placed first as the Best Overall Delegation. (II) Tom Neilson, (II) Scott Nantes, (III) Dean Saroop, (III) Maximillian Reinthaler, and (IV) Joycelyn Moffat were elected by their peers as the Best Delegate in Committee. In addition, (II) Scott Nantes and (III) Maximillian Reinthaler were commended by their committee chairs and received the award for Outstanding Leadership in Committee. Major Ian Rutherford’s brilliant mentorship and witty retorts in conjunction with his administrative coordination were key in the guiding the team’s success.

The dedication and commitment of the team, as well as their hard earned victories, were recognized on Parade during the last Commandants parade of the year, the awards being presented by RMC principal, Dr. Joel Sokolsky. The acknowledgement from our peers and superiors were greatly appreciated and it is hoped that they served as recruitment incentive for new team members to tryout and continue the three year winning streak.

Participation in the event could not have been possible without the financial support of the RMC Foundation. On behalf of the 2011 Model NATO Team, we would like to thank the individuals who sponsored the event and supported the efforts of the cadets involved. As a cadet, opportunities such as the trip to Washington D.C. are key moments within academic life at RMC as it allows for the practical application of both the military leadership as well as the political and academic knowledge studied at the College. Participation in the event for the last two years has been pivotal to my achievements at the college, and I sincerely hope that continued support from the academic wing, the military wing, the cadet wing, as well as the RMC Foundation will allow for future cadets to prosper and be enriched from the opportunity.