A deployed theater army command of one two corps field army and other theater army units, especially with families in place, is an enterprise far beyond what many consider as a “military” operation.  Leadership worthy of reflection operates in many of the pockets of activity not traditionally thought of as areas where leadership’s practice occurs or is of importance.  The following vignette belies that misconception.  In this instance, leadership functioned and functioned very well in an operation that ultimately touched a major part of the military and civilian community in the Theater command’s area.

The morning shift began assembling in the rising room outside the oven room at the Eselfürth Post Exchange regional bakery near the southwest German city of Kaiserslautern in Rhein Pfalz.  The city and surrounding areas was home to a large U. S. Army logistics complex that had been absorbing other support units as they relocated from France consequent to developments with the Government of Charles DeGaulle.

It was early summer and a hot spell had settled on the area.  As the crew entered the building the temperature rose and the humidity was like hitting a wet wall.  The latter was driven by the racks of stacked bread pans five bread loaf trays wide with the rising bread dough in the trays creating an uncommonly humid effect. The room, warmer than the already hot outside combined with the humidity was stifling to the shift crew entering the room.

The stacks of rising bread dough were a present from the night baker.  The day’s batch of some 30 wheeled racks eight levels high had been rising for awhile and would soon be ready to wheel into the oven room.  Most of the day’s work would be long loaves of white bread.  Some batches of rye bread, cookies and certain pastries would be worked into the schedule but again most of the work this day would be long loaves of white bread.

The building was a pre-world war two German Army facility, pretty much being used as it had been under German management with necessary changes in equipment and management.  The product of the bakery on packaging would be distributed over a wide area of the U. S.  Zone mostly in Southern West Germany.

The morning crew assembling was a team of five who would from just after sunrise until early afternoon systematically wheel the racks of uncooked dough after it had risen into the oven room then load the bread pans onto the huge conveyer oven racks.  After the bread was baked for the prescribed amount of time, the team removed the pans from the ovens back onto the empty racks then wheeling the racks to the cooling room where another team would move them to a packaging facility.

The leader of the team, the day baker, was an ex-U. S. Army soldier who had married a German lady and on discharge from the Army remained in Germany.  He had been in a food service specialty while in the Army.  He was a man in his middle late thirties, medium height and in good physical condition.  He presented a confident, level headed and competent aspect.  He was friendly but in charge.  Approachable, a new employee felt comfortable in asking questions but sensed that there was an expectation that the lessons would stick and be learned.

The day baker also communicated to his team an interest in safety…he made it clear that the work was dangerous and hijinks or horseplay would not be tolerated.   In this sense the composition of the team and the work on the ovens particularly made safe work critical if injuries were to be avoided, primarily burns, and working through a busy and demanding schedule was to be completed on time.

The morning shift team consisted of the baker, an assistant baker and four assistants.  The assistants were non-appropriated fund hourly employees.  Two were American dependents and two were German nationals.  The most colorful member of the team was one of the German nationals—an entertaining young man who could draw a laugh from anyone at anytime.  He was a slender taller than medium height person with a shock of hair died a bright orange which had earned him the team’s American sobriquet of “Carrot Top” a nickname he wore proudly.

Another team member was an American Army dependent, the son of a field grade officer commanding at one of the barrack complexes in the large Kaiserslautern logistics establishment.  He had already been employed in two other non-appropriated fund jobs in the area during the previous two years, allowing some perspective on the bakery’s operations, especially the conduct of the leader, the day baker.

As the team assembled in the rising room, the day baker provided the days guidance for their shift.  It would be a tough day from the schedule—the racks were many and full.  Carrot Top in usual fashion made a joke, a natural comedic person, he put his body into the joke and broke the mood—everyone laughed.  They also knew their leader would be right with them on the hot work.  They all knew he led by example…he never asked them to perform a job he wouldn’t do himself.

The team entered the oven room—the heat almost knocked each man off his feet.  The oven room was so hot that during scheduled breaks, stepping outside on a 90+ degree day was like stepping into a refrigerator.  This would be a rough shift—the baker reminded every team member to hydrate at the fountain.

Each team member wheeled a bread rack into the oven room, situating the racks in front of the huge wide ovens with their 10 foot wide by two foot vertical doors with the conveyor shelves inside.  They would load five bread trays on each shelf loading ten shelves in each oven before beginning the timed bake process and unloading after which the process would be repeated.  They would be working four of the ovens that morning into early afternoon.

Each man, as trained by the baker, made his pair of “hand mitts” from the heavy rough cotton 4 x 4 rough sheets.  The sheets folded over several time and secured on the side by punching holes in the several layer thick cloth and tying them tightly together with a thin length of the same material.  But there would be no protection from the hot metal of the ovens and bread pans above the wrist.  On a heavy schedule day that this one promised to be, skin contact by the lower arm with the sizzling hot metal was likely to occur, especially as fatigue set in.

As the oven loading began, the baker began his low key coaching of the team that focused on task precision, encouragement and safety.  The team always responded well because the baker was leading by example.  Though it didn’t seem the case he was constantly sensing each team member’s rhythm, instantly picking up on any deviations and resting a team member who seemed fatigued.

For emphasis, the baker did not tolerate the demeaning of a team member.  All understood that repartee was fine in good humor but on the baker’s team, keep it civilized.

It proved one of the toughest days the team had confronted, but the work maintained a steady pace.  As the ovens filled, went through the baking cycle, were  emptied and reloaded, the number of racks in the rising room steadily reduced.   But the pace of the work did result in forearms coming in contact with hot metal.  Some burns resulted but minor.

As the end of the shift approached, the day’s batch of rising bread was completing transfer to the ovens.  The work was completing and did by end of shift.  The team had met the requirement.  The baker thanked each team member for their hard work and completing a tough day’s work.  Each man left with a sense of satisfaction that they had met the challenge and gotten the work done.

The dependent who’s father was the officer elsewhere in the command area would leave the team midsummer to return to the United Sates aboard the USNS General Simon B. Buckner, a troopship, to enlist in the Army Reserve to accept an Army Reserve Officer Training Corps (ROTC) scholarship and attend the University of Connecticut where he would participate in the ROTC Program.  He would hold three other hourly jobs in the following years. 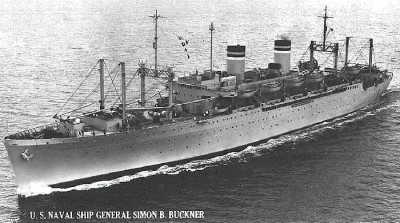 Of the six hourly jobs he experienced, one single item stood out in his mind, the day baker’s leadership.  The day baker left a deep impression and was often reflected upon in years to come—as an example of how to do it right.  He was a leader who led by example, communicated to each member of his team their value, respected each man’s dignity and asked no one to do what he was not prepared to do himself.  During the hottest work on the ovens…he was on the ovens with his team, doing the hot work.

The soldiers and civilians of U. S. Army Europe got their fresh bread that day and many of the hot summer days afterward.  The bread was on their tables providing the food staple their meals depended upon.  This small miracle of sustenance was  thanks to the hard work of a disparate baking team.  But most especially, it was a function of the team’s leader, the Day Baker, a most effective leader indeed.