As often is the case, leader “opportunities” will develop at what at the time may seem the most inopportune moments.  Not infrequently, such opportunities develop from a situation where leadership is failing or has failed. It happens in these cases that the leader that must rise to the occasion is one that would have been least thought of to fill the leadership breach.

Typically, for that leader about to be presented with an opportunity, everything seems wrong in the developing situation for that leader’s involvement.  Yet, the leader rises to the occasion with telling effect.  Such leaders, who do not fail when called, no matter how inopportune personally, and whose conduct in such situation is worth remembering when and if we find ourselves in similar circumstances, are essential role models in our personal Pantheons of best role models to emulate.  They show us a way forward as leaders no matter how difficult a situation may seem.  The following vignette remembers such a leader.

The Assistant Division Commander for Maneuver’s (ADC(M)) Aide-de-Camp was engaged in a short conversation with the forward deployed infantry division’s Plans, Operations and Training Officer, G-3, a seasoned and wisened officer of some extensive experience, an infantry lieutenant colonel.  The colonel was in the ADC’s outer office at the division’s headquarters on an installation in South Korea.  The G-3, an exceptional and professional officer, but one who was down to earth and always approachable, clearly had something critical to discuss with the ADC, a brigadier general, whose previous career as an officer had been as an infantry officer as well.

In the chit chat the aide and the colonel were having during the wait for the meeting in the commander’s office to end, in carefully delivered phrases the colonel’s unusually cryptic comment indicated that some issues that had been developing in the division’s signal battalion were reaching a critical level.  The aide was aware that there had been a number of ongoing issues with the battalion and its leadership.

To some degree, the negative situation regarding discipline was not unique to the battalion.  Across the Army racial discord was being fomented by an element of African American soldiers and these situations were challenging and difficult to address even for officers and non-commissioned officers of African American heritage.  But for the most part, Army policies and leadership were working through the challenges effectively.

The above said that leaders had to be fair, open to discussion but firm on holding all soldiers to the standards of the service.  When leadership was fair and honest in its conduct of command and soldiers were treated equally with promotion, recognition, duty assignment and impartial discipline and punishment when necessary, units under such leadership fared well.  Soldiers responded as soldiers performing their duty with efficiency, loyal to a chain of command that understood the two way street between the soldier and his leaders is an essential of effective leadership.

But something in the current signal battalion mix just wasn’t clicking. The leader, his team and the battalion were not giving off a sense of the well oiled, competent and disciplined mission capable unit essential to the situation of a forward deployed combat division on Freedom’s Frontier.  In this case a division in close proximity to an enemy that was in a suspended state of war with the UN Command in South Korea’s capital Seoul.

In the last few days several incendiary incidents had occurred in the adjacent city and on the installation fomented by personnel from the battalion.  As well, despite the work to correct the issues, several operational requirements had been badly handled or not met.  The Division commander had been losing confidence.  The activities of the several racially motivated ringleaders given a larger climate that the command had been addressing, warranted a dramatic change in the leadership chemistry of the battalion.  Something was about to happen.

The G-3, a senior lieutenant colonel who had successfully commanded a combat  infantry battalion, a combat veteran of operations in  Viet Nam, a promotable lieutenant colonel who would soon make colonel, was a hard working highly competent and self-effacing leader.  He never promoted himself and was easy to approach and engage with.  He had that knack of being a senior officer and maintaining the senior positioning but never living off of his rank…he rolled his sleeves up and worked the long hours necessary right next to his team.  He gave his subordinates their space and allowed them to work and he was quick to give credit and reward to his people.  He almost never seemed to position himself to get credit for anything, yet his G-3 Shop produced miracles of staff work.  The G-3 was one of those rare leaders we dream of serving under…a very good and competent officer whose ego never got in the way.

The meeting in the ADC (M)‘s office ended.  On departure of the meeting’s attendees, the G-3 entered.  The door closed.  After about 20 minutes, the ADC and the G-3, removed to the division commander’s (a major general) office at the other end of the building. A following meeting lasting 45 minutes developed. 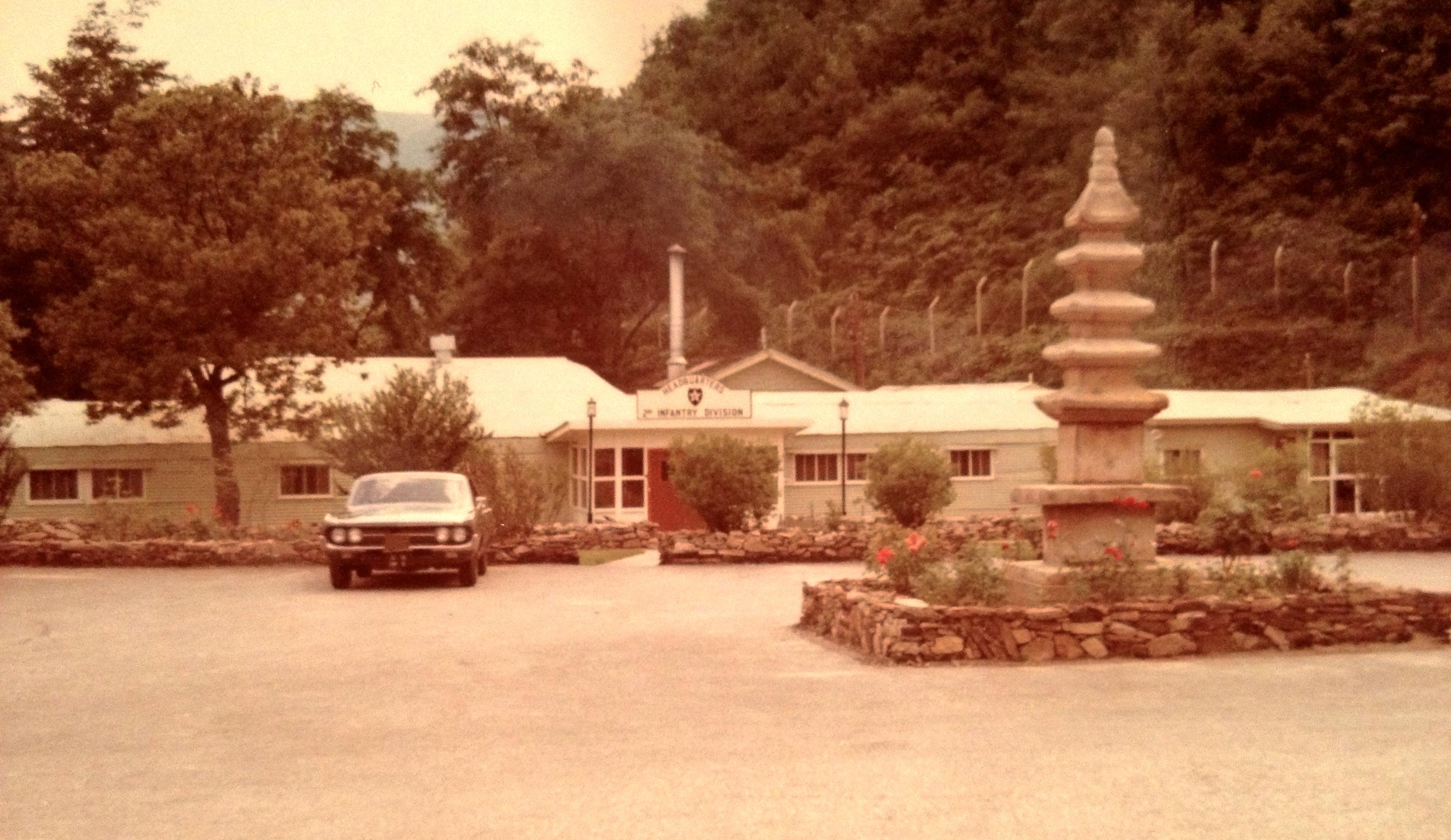 The division headquarters where the battalion relief decision was taken.

Almost immediately afterward, the relieving commander was introduced and a command assumption ceremony was held.  It was the G-3.  The G-3 handed over his duties to the Assistant G-3 and once again positioned “green tabs” on his uniform shoulder straps…he was again a battalion commander at a most unexpected time.

Literally three quarters of the way through his year long tour of duty in Korea, a senior promotable lieutenant colonel with a highly successful infantry battalion command tour, a further opportunity to excel was not necessarily an overly welcome development for this officer.  This was especially the case given the high personal career risk the G-3 was accepting with the signal battalion in its present state.  And in later conversation, it was clear he was alive to every pitfall he was confronting.

And yet, being the kind of selfless leader he was he understood that the battalion’s mission success and readiness were critical to the division and the soldiers needed effective leadership to be rescued from their lesser instincts.  In a sense, though well aware of the personal risks and the personal hardships to be confronted, he may have to extend his unaccompanied tour for a time, he would accept the duty and hazard the risks.

Though not quite overnight, the transformation of the battalion into a mission ready professional unit with strong discipline and collective pride in unit nevertheless occurred rapidly.  The change was dramatic.

This colonel forever remains in my mind.  If you met him his nature was disarming.  He never talked about himself except to underscore a critical point when necessary. He did not stand on a lot of formality and was always headed toward getting his team to get the problems solved and get ahead of the “power curve” to reduce reaction wherever possible.  And yet one quickly sensed that he was the leader and in charge…he knew what he was doing and you felt it.  You were motivated to do well by this officer with everything you had in your professional toolbox.

The proof of the above assessment was the dramatic and rapid turnaround in the signal battalion.  A surprise battalion command in another arm by a self-effacing non self promoting officer…one of the finest officers I experienced in early career.  He was a superb example of leadership to emulate.

A postscript…the 122nd Signal Battalion, organized in July 1916 at Ft. Bliss, Texas was deactivated in June 2005 as the Army moved the communications supporting the 2nd Infantry Division to satellite systems ending a continuous 89 year distinguished record of service as a Regular Army battalion. The majority of that service and placement on the nation’s troop unit rolls was in support of the 2nd Infantry Division, a unit that engaged in combat in World War I, World War II and Korea.  The division has since seen active operations in Afghanistan.

Dr. Darrell Menard: How do I get started? “...start out low and progress slowly”