The Terror of the Night—the Private that Lost It

The platoon was still adapting to its developing situation.  It had come ashore on an island coast line with no beach—the trees came to the waterline.  The landing Craft Infantry (LCIs) had brought them in until aground and they’d splashed through the interval of seawater into the tree line.  The enemy had resisted but seemed intent on drawing the units into the dense green of the jungle.  The ground rose rapidly into a ridge system, the lines of the ridges heading in a northwesterly direction.  The ridges were intended as approaches in an attack on a Japanese airfield several miles to the west on the island.

The combination of dense jungle and skilled enemy activity had made movement toward the ridge slow.  By night fall the platoon was assigned a section of the company’s defensive perimeter for the night.  The unit was ordered to dig in—then well into the dark hours, the enemy began the dialogue.  They probed the defense by fire and they kept up a steady calculated program of noise making and verbal taunts, conversation and other human noise to play on the still new to jungle warfare troops of the unit.

The enemy’s activity had the desired effect.  Soldiers would fire randomly into the dark at the noises.  Soldiers in two man positions panicked and in the dark engaged their buddies in hand-to-hand combat.  Non-commissioned officers  (NCOs) did what they could to keep the least experienced men from panicking or over reacting.  Sadly some soldiers were wounded and lost during the first night at the hands of their comrades.

One soldier had been brought under control before harming anyone but even by morning did not appear to be back in control.  He seemed untethered and his conversation was still excited and somewhat irrational.  The situation however, prevented removing the soldier from the unit at the time.

During the day the platoon moved forward slowly. The enemy resisted with telling effect.  By nightfall little progress had been made along the rising ridgeline.  Again the platoon was assigned a sector for night defense and again the enemy began his nighttime activities.  The tempo of the enemy’s activity seemed to be more accelerated and aggressive.  The private began to deteriorate.  He began to scream obscenities and threatened to break loose with his weapon.  An NCO moved to the position to attempt to calm the man down.  Shortly afterward, the soldier broke loose and running through the company defensive position fired randomly in every direction with his weapon as he ran.

An NCO ran in the man’s direction attempting to intercept and get him under control.  There was struggle and shots rang out.  The mentally crippled soldier had become a fatality of the action.

In the following days of combat the regiment making the assault on the Japanese position would gain its combat footing.  It was a rough apprenticeship in the world of island jungle combat.  The opponent commander was a skilled and tough combat veteran of operations in China and elsewhere in the Theater.  His use of terrain and available forces would prove tactically masterful and his veteran infantry would fight very well teaching their American opponents many hard lessons, lessons they would learn very well and improve upon. 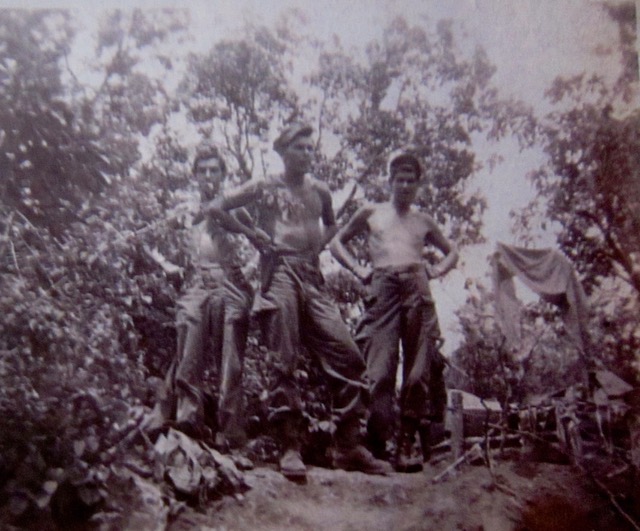 Caption: On campaign in the South Pacific–The sergeant at center wears a Webley Service Revolver taken from a Japanese officer likely taken from a Commonwealth soldier in Malaya.

The American units gained experience and improved their combat worthiness and capability with each day that passed.  The prize was critical—an airfield that would on seizure allow the allied forces to bring immediate and overwhelming air capability against Japanese forces in the area and beyond, forcing their withdrawal and setting the stage for new attacks into still occupied territory ultimately tightening the noose on Imperial Japan and cutting it off from vital strategic natural resources like petroleum supplies.

But the cost to get to battle proficiency and the personal road taken to get there would leave an indelible mark on every soldier who survived the experience.  Some would not be able to make the transition.  They would become casualties of another kind.  And many that would make a transition to being able to function in combat would meet a soldier’s death.  As well, the conditions of the theater’s climate and its natural enemies like malaria and dengue would also claim soldiers lives and many who survived would suffer the effects of these disease wounds for the remainder of their lives.

Many who made it home and built their successful post war lives and new families would do so while carrying their physical wounds, their disease wounds and their even deeper wounds of post traumatic stress.   Some would find themselves again confronting an enemy on the field of battle five years later.  Yet they somehow performed this hard task.  The depths of the effects of the experience may be sensed when 20, 40 and 60 years afterward a soldier that survived recalls the private that lost it—the private in a way was a “wound” of a kind that kept returning decades later.

Each soldier of the platoon was a leader in his own way—even if it was projecting himself forward when paralyzed by fear or in the case of the private in this story by loss of his mind.  The remarkable story of individual leadership in this platoon’s situation is that despite the able enemy, the debilitating climate, disease, the psychological mountain they had to climb—they went forward.  They did not run, they became increasingly effective at combat with their opponent and completed their mission.  Their NCOs added to this story of leadership, they prevailed and rose to the tough leadership task.

This toughness of native leadership ability and capability exists in any unit.  If leaders understand that the capability is present and have the skill and art to tap into it, almost any mission may be accomplished.   But the memory of the private who lost it tempered the surviving leaders—it did so by reinforcing a sense to never give up and lead, to get the job done, to lead effectively through the terror of the night.