The Staff College Class of 1983—A Huge Leadership Challenge

Like the Canadian Army, the U.S. Army addresses significant thresholds in its history and ever evolving development.  Even under the most benign of periods, armies are ever dynamic in their circumstances.  They are always in the process of addressing changing social, fiscal, technological and doctrinal factors, all of which, and more, are ever affecting the army’s status and establishment.

The following vignette examines a window of leadership significance in one of the U.S. Army’s more noteworthy junctures with such forces of change.  It may be noted in the narrative the extent through time of previous Army leader generations in the hand off of leadership to the emerging leader generations.  In this sense the vignette bears relevancy to any army as it addresses such thresholds of change in its own experience.

The U.S. Army Command and General Staff College Class of 1983 started arriving at Ft. Leavenworth, Kansas in middle and late May 1982.  Classes would begin at the college in early June.  The mostly army and a selection of other service’s officers and several civilians student body would be enriched by a leavening of allied student officers. 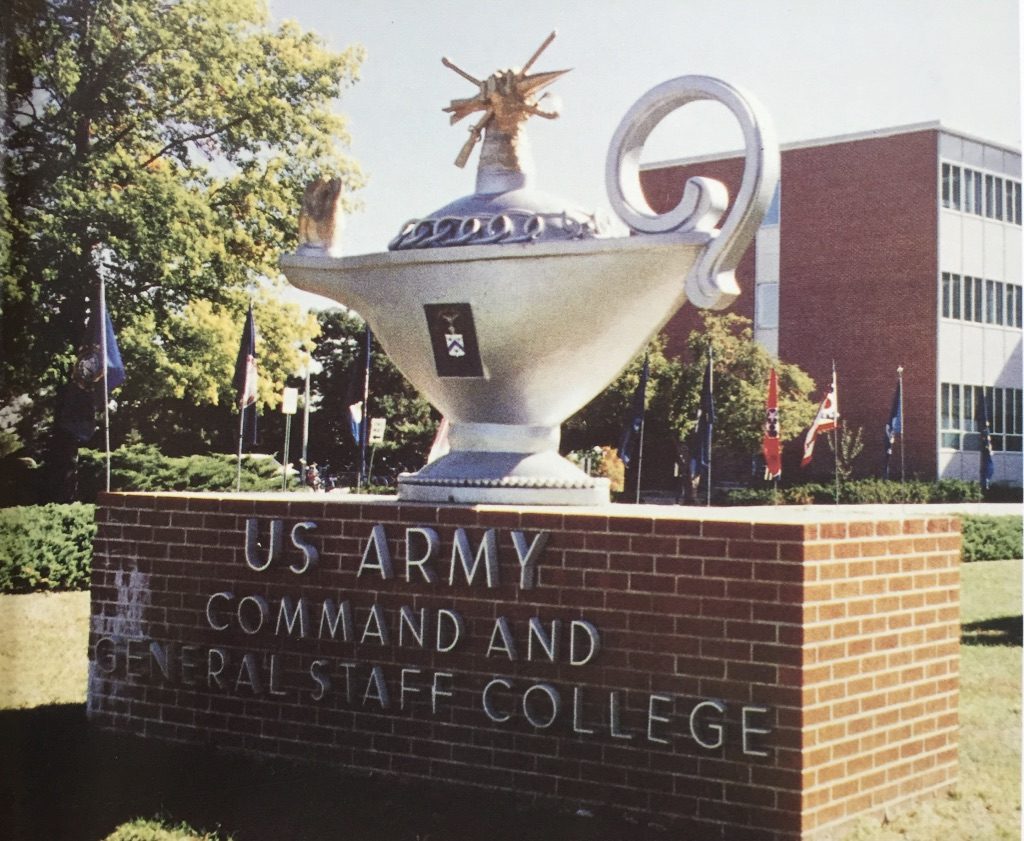 The U.S. officers came from across the army, its reserve components and all points of the compass.  Almost all of the officers had bachelor’s degrees and a large majority had master’s degrees.  It was a very well educated, traveled, and experienced student body.  A significant number of the class had seen active combat operations in Vietnam, the Dominican Republic or had drawn hostile fire pay in South Korea in operations along the Demilitarized Zone.

Most of the new forming class were majors or lieutenant commanders with a number of captains and lieutenant colonels.  Even though most of the new class were at 9-12 years of commissioned service, the experience base was extensive including all arms and levels of Army and service activity up to senior level headquarters. As noted a fair number of the students extended the experience base by having seen active combat operations in Vietnam, the Dominican Republic and Korea.  Additionally in this regard, the allied officers also included veterans of active operations to include UN peacekeeping operations. Many officers had served overseas tours in Europe, Korea and locations in Central and South America and some undisclosed locations as well.

This array of backgrounds and experience would be critical to the class’ progress and success.  It was to be one of the pivotal classes in the Army’s vast modernization initiative, particularly the Army’s heavy force component initiative that could trace its roots to work as early as 1971 at Ft. Hood, Texas, in the conduct of the Air Cavalry Combat Brigade Tests 1 and 2 administered by Project MASSTER (Mobile Army Sensor Systems Test, Evaluation and Review) and Operation Gallant Hand a division on division exercise of several weeks also conducted at Ft. Hood.

Some of the class had participated in following modernization work such as the U. S. Army Infantry Board’s Developmental/Operational Tests 1 and 2 for the Squad Automatic Weapon and the Developmental/Operational Tests 1 and 2 for the MICV (Mechanized Infantry Combat Vehicle), and other work such as the developmental and operational testing of what would become the Apache Attack Helicopter and the M1 Abrams Tank. The MICV would evolve into the fielded M2 Bradley infantry Fighting Vehicle and M3 Chaffee Cavalry Fighting Vehicle.

This base of exposure by many in the class to the Army’s vast modernization initiative, combined with work at the college, would launch the class as graduates into the unprecedented decade plus of non-war force modernization to follow.  The class would be a critical wave of continuous and developing leadership in that huge modernization project.

The class organized into 22 sections of 50 students each and began the course of instruction and study.  Tactical and operational studies from brigade to corps and higher command and control were addressed concentrating on the brigade and division with some consideration of the battalion as well as higher echelons.  Intelligence, logistical support operations, reconstitution, all developed as topics of study and inquiry.

As well, the course of study examined joint and combined operations, Department of the Army and the Army’s development, procurement and logistical, logistical systems, to include interface with the budgetary processes and the programmatic systems that were use to manage acquisitions.

At one point in the course of study, the then Army Inspector General, Lieutenant General Richard G. Trefry, addressed the class.  His topic was oriented on the Army’s modernization effort with a challenge to the class, one the class would be accepting and addressing on graduation and return to the Army: the massive modernization of the force that was initiating. 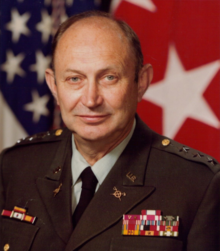 The upshot of General Trefry’s remarks was that the class would be challenged as no other class before it in a non-war situation.  They would be totally engaged in bringing the Army to its highest readiness in peacetime history in the surreal war, the Cold War, that had been on going for then some 33 years.   The class was to help lead the Army in bringing itself to a modernized war footing that would overmatch a highly capable peer force if conflict occurred.

The sights of the class would be on implementing the modernization at every level, the primary target being the the plains of Central Europe.  In the event, General Trefry’s remarks were proved accurate.

General Trefry was not alone as an Army senior leader viewing the scope of what was about to happen.  Another guest at a seminar for select students was General J. Lawton Collins, past Army Chief of Staff during the Korean War, a veteran of the World War II mobilization and modernizations followed by combat division command in the South Pacific and Corps command in Europe.  General Collins made clear the magnitude of the challenge the students faced and how they would prevail. 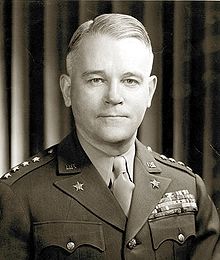 As the academic year approached completion, student officers busily developed their following assignments with their officer personnel branches at the Military Personnel Center.  This interface was followed by conversations and negotiation with gaining commands.  This process of these negotiations around academics could be arduous not infrequently for overseas commands entailing late night/early morning phone interviews.

In the author’s case it would settle on a mechanized infantry battalion executive officer assignment in the 1st Armored Division in Germany, one of the formations at the heart of the modernization storm.  It would be his second assignment to the division, the previous June 1970-April 1971) having been at Ft. Hood, Texas where as noted early work leading to the modernization had occurred and ironically Lieutenant General Trefry, then Brigadier General Trefry, had been the assistant division commander of the division most involved with this work, the 1st Cavalry Division (Tri-Capability).

The author had been assigned to this division and personally participated in this work by the Army that led to the massive modernization initiative.  That work came to mind with General Trefry’s remarks.  The Air Cavalry Combat Brigade Tests 1 and 2 and Operation Gallant Hand that the author had participated in were some of the initial steps by the Army that carried forward into a growing array of initiatives now coming to fruition with the reorganization and re-equipment of all of the Army’s heavy force formations.  (The author’s first contact with General Trefry was during this period with an interview as a possible aide-de-camp shortly after the general assumed duties as the assistant division commander.)

Soon the class had graduated and dispersed to the Army.  Within weeks, most were elbow deep in the work General Trefry had referred to and it was challenging work.  In the author’s case over an 18 month period the battalion he joined would be reorganized from a headquarters company, a combat support company, and three mechanized infantry companies, into a headquarters company, four mechanized infantry companies and an anti-tank company.   It would concentrate all of its heavy anti-tank missiles in that company and all of the battalion’s vehicle mechanics would be concentrated into a single large maintenance section in the headquarters company.

The battalion would deactivate its combat support company placing its mortar and scout platoons under the headquarters company.  Its Company E would assume control of all the battalion’s large anti-tank missiles.  The battalion would turn in its nine 81mm mortars and accept two additional 107mm mortars bringing to six the inventory of these larger caliber systems.  All of the M578 light armored recovery vehicles were turned in and M88 Heavy Armored recovery vehicles were drawn.  M54 5 ton trucks were exchanged for M977 Heavy Expanded Mobility Tactical Truck (HEMTT).

The above inventory was only a selection of the reorganization actions.  And at the end of 18 months the turning in of all M113 Armored Personnel Carriers and acceptance of a new fleet of M2 Bradley Infantry Fighting Vehicles was in the offing.

At division, initiatives also included the emplacement of infrastructure and installation of 11 Unit Conduct of Fire Trainers for the 10 maneuver battalions and the cavalry squadron, interactive simulation gunnery training systems that would significantly alter gunnery training in the heavy force.

These actions and thousands more were occurring in every battalion, regiment, brigade and division of the Army’s heavy armored forces. It was, as Lieutenant General Trefry had admonished the Staff College Class of 1983, a huge leadership challenge.  When the additional leadership challenge of maintaining the combat readiness of the units and formations while simultaneously being engaged in modernizing these units is added to the consideration, how seamlessly the effort was managed and led is a remarkable feat.

General Trefry had been correct.  The Class of 1983 would be engaged in leading the effort for the next 10 years and in sone cases the next 30 years or more of their careers.  The quality of their leadership and work would manifest itself in the 1991 Gulf War and the later second war with Iraq.  Overall, the class had done a magnificent collective leadership job against a truly challenging task, a daunting task in retrospect.

One member of the CGSC Class of 1983 was of particular note in the leadership work the class was embarking on.  He was perhaps the class’ youngest member, Captain David H. Petraeus. 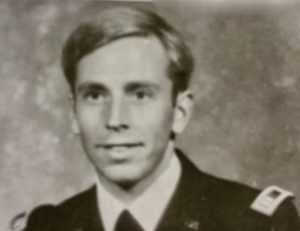 The class’ top graduate was one of the more junior officers selected to the class.  Captain Petraeus was a member of the class who along with many of its members would make significant leadership contributions to the Army in the work ahead.  He would perhaps prove one of the more vital members of the team of leaders presented to the Army by the CGSC Class of 1983 and at a critical time in the Army’s history