The mechanized infantry platoon was negotiating a tough operational schedule.  It was several weeks into its being placed under the operational control of Company A, 1st Battalion, 13th Armored Regiment, a unit of the 1st Brigade, 1st Cavalry Division.  The latter was now designated as the Army’s tri-capability division based on its reorganization from an air assault division into a formation of one armored brigade, one attack helicopter brigade and an air assault brigade with the necessary increased aviation elements to support the new organization.

The platoon was an organic element of Company A, 2nd Battalion, 12th Cavalry, a mechanized infantry battalion.  As noted, it was operating with Company A, of the 1st Battalion, 13th Armor.  The latter was a tank company.  The two units formed a tank-heavy company team that constituted the U.S. ground force operating with attack helicopter and air assault units against a reconfigured armored battalion of the 2nd Armored Division operating as a Soviet tank regiment.  These units were engaged  in the endless force on force maneuver scenarios being played out on Ft. Hood’s maneuver box as part of Air Cavalry Combat Brigade Test I, the first post Viet Nam examination of a potential major reconfiguration  of the Army.

The unfolding schedule was a tough one with field deployments on Monday through Friday each week and occasionally into a weekend and the troops bivouacking in field laagers at the end of the maneuver cycle each day.  Many multi-day scenarios included night operations.   This program would stretch over six months of sustained test operations and data collection. The platoon with such a schedule risked being overlooked by its parent unit for administrative support as its operational control company as its deployed throughout the duty week month after month.

The issues associated with such separation from the company orderly room, the first sergeant and the company clerks were compounded with the still significant personnel turmoil occurring as drafted soldier two-year terms of service expired and replacements were assigned.  Assuring that soldiers of the platoon received effective administrative support in such an environment was a challenge, not least being assuring soldiers received the awards and recognition they had earned during their service.

Adding to the challenge, the platoon was required by the test to be at full authorized establishment of 49 soldiers by table of organization and equipment (TO&E) to include stipulated rank and military occupational specialty.  The platoon’s manning requirement had not been met by its parent mechanized battalion by initiation of the test’s pre-training program.  The platoon had initiated its pre-test training with only 12 soldiers and one officer assigned.

A subsequent intervention by the assistant division commander for maneuver after his appearance in the field at the training site led to an overnight reconstitution of the platoon. By the end of that week, the platoon found itself with 35 soldiers, 13 noncommissioned officers with rank as specified by the TO&E and an officer.  Thus began an accelerated integration of personnel by the platoon.

One of the platoon’s newly assigned sergeants was a staff sergeant who was immediately appointed as one of the three rifle squad leaders.  Staff Sergeant Dave Waite already had several years of service under his belt, was recently returned from Viet Nam, was a Noncommissioned Officer Academy graduate and had completed two years at university.  He indicated the sort of leadership potential the platoon would need as it consolidated its newly assigned personnel without the benefit of a respite from operations. The demanding and ever present field schedule dictated that the platoon leader and his new subordinate leaders would get to know each other and obtain a measure of each other’s capabilities and talents on the run.

Sergeant Waite quickly proved a competent and effective leader.   His proficiency as a mechanized infantry squad leader in the grueling scenario driven operations cycle was readily apparent.  In addition, Sergeant Waite became an essential part of the platoon’s administrative initiatives for its personnel during its scarce stand down days in garrison.  He proved an adept administrator and became the basis for the platoon’s “shadow orderly room” that processed a range of actions in cooperation with the company orderly room.

The platoon leader had quickly assessed Sergeant Waite’s additional abilities and determined that a “shadow orderly room” was a possible expedient to the delays in processing personnel actions for platoon soldiers approaching the beginning of their out processing schedules.  Critical was the processing stand-off time necessary to assure the soldier received recognitions and awards warranted before separation from service.  The processing of an awards recommendation to be completed before the soldier separated often meant that the recommendation and processing needed focused administrative attention, which could be difficult for the orderly room to provide with its resources.  Addressing this challenge successfully was a factor in building and sustaining platoon morale given the busy schedule.

The platoon leader determined that Sergeant Waite had the necessary skills and abilities to perform this in-garrison initiative and  directed him to do so.  The results were as intended.  The processing of actions was brought under control in a way that effectively aligned with the departure to out processing of platoon soldiers.  As a result, the contribution to morale was great and the platoon’s soldiers knew their chain of command was taking care of them.

The leadership contribution of going the extra distance and being effective at doing so was a critical factor in collective platoon success.  In this sense Sergeant Waite’s effective leadership as a rifle squad leader and his effectiveness in supporting the platoon’s administrative initiative were critical to this collective success.

Sergeant Waite and the platoon leader had entertained discussions about the sergeant’s longer range career goals.  The platoon leader considered the sergeant a worthy candidate for a commission and encouraged him to pursue this course.  The sergeant’s personal thinking dovetailed with this assessment and encouragement.  Processing was initiated and Staff Sergeant Waite was accepted into a commissioning program.

The platoon leader subsequently assumed duties as a mechanized infantry company executive officer and then a tank brigade headquarters company executive officer.  He was later reassigned to the 2nd Infantry Division in Korea where he led another rifle platoon and was subsequently assigned as an aide-de-camp to the assistant division commander for maneuver.  While in the capacity, the old platoon leader had a surprise visitor.  His old squad leader paid an office call.  Now 2nd Lieutenant David Waite, 1st Special Forces, he visited his old platoon leader at the 2nd Division’s Headquarters.

It was a much appreciated reunion by the old platoon leader.  It also verified the value of extension of solid leadership perspectives that produce results by also meeting the leader’s obligation to the soldiers being led.   It was most appropriate in this case that Dave Waite carried the effective leadership style manifested in the mechanized platoon several years before to a Special Forces format as a commissioned officer. 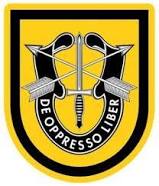 3214 Phil Gunyon and the 80th Anniversary of the Sinking of the S.S. Athenia