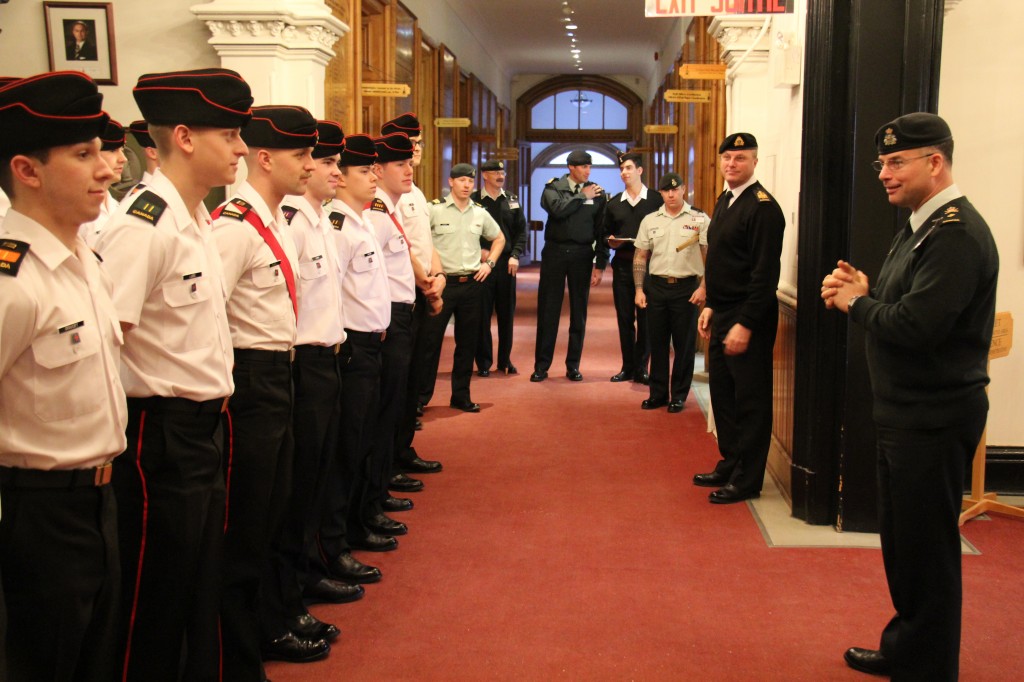 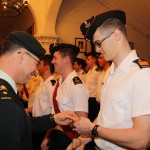 With selections for the 2013 RMC Sandhurst Team complete, College Commandant, BGen Eric Tremblay, and Director of Cadets, LCol Patrick Lemyre, met with all those involved with the program, including the team, supporting Cadets, and Staff instructors, this past Tuesday afternoon. BGen Tremblay took the opportunity to present each member of the team with their Sandhurst shields, which they will wear on their uniform around campus.

“My expectations are very simple,” he told the assembled Cadets and staff. “This will be a highly competitive team. Highly competitive,” he stressed. “I know that you have other duties as well, and so I also want you to make sure you maintain a balance between all of your activities and commitments,” BGen Tremblay said.

As LCol Lemyre told the team later, the team members received their shields so that other members of the Wing would know who they are. “This was not done, he said, “to set you apart and make you an elite, but rather so that those interacting with you can see your commitment to the Sandhurst team and that you are also continuing to meet the rest of your responsibilities as members of the Wing.” 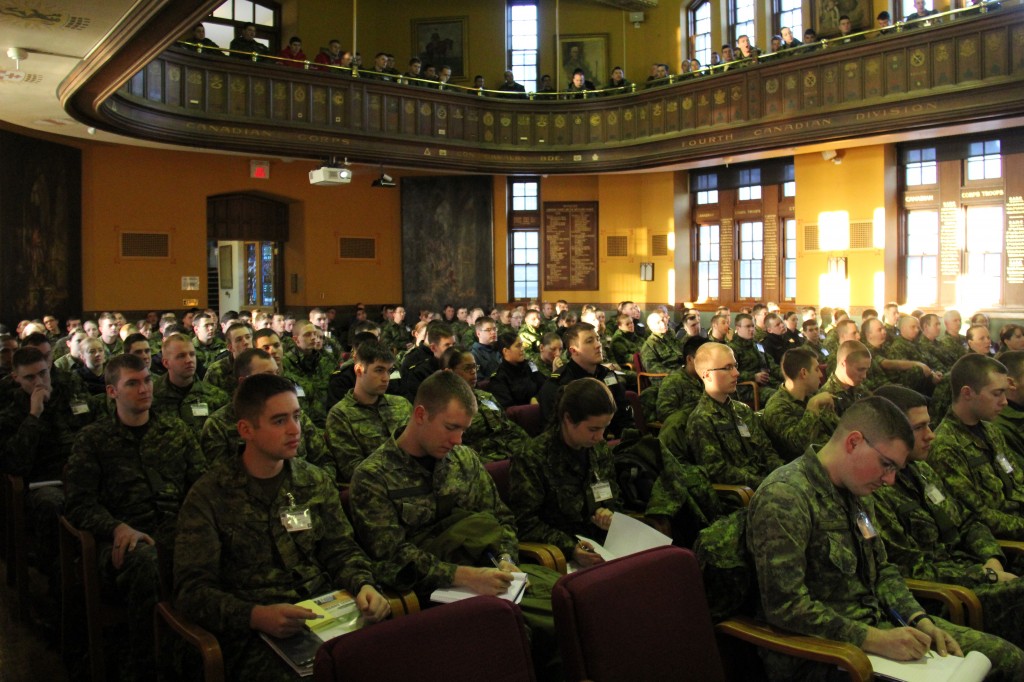 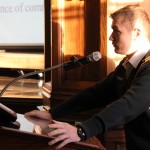 They all know it’s coming, and they’ve been counting the days for a while, but now they know what exactly they still have to do to get there. This past Wednesday, during Professional Military Training, or PMT, the Class of 2013 got a detailed look at the requirements for Graduation. Capt Besmir Shurdha, Staff Officer Careers, took the time to explain the requirements in detail, as well as to go over any areas that might be confusing to the 4th Years. He pointed out, for example, that Cadets who only pass the CF EXPRES test, and not the RMC PPT, can still graduate, as the requirement has, as a minimum, the CF test.

With only a few months to go until Graduation, and the 4th Years already busy with classes and other responsibilities, this brief will hopefully ensure that no one is caught without a requirement at the last minute. 10966 LGen (ret) Michel Maisonneuve, Class of ’76 payed a visit to RMCC this past week. As the Academic Director of RMC Saint-Jean, he came to check up on those Cadets now in their Second Year at RMCC who were at RMC Saint-Jean last year.

“I came to see how you were doing, and it’s nice to see so many familiar faces,” he told the assembled Cadets. “I want to make sure that we are preparing you as we should, and that the integration process here in Kingston has been as smooth as possible.” LGen (ret) Maisonneuve then took time to answer Cadet questions, and he also took the time to touch on the results of a recent survey on the success of the integration process.

“Mercredi dernier les anciens élèves-officiers du Collège militaire royal de Saint-Jean ont eut la visite du directeur des études le Lieutenant-général (ret) Michel Maisonneuve, du directeur des études, le major Proulx et du nouvel entraîneur chef du collège, Stéphane Beauregard. Le but de la visite était d’obtenir les commentaires, les critiques et propositions des anciens élofs du CMRSJ à propos de leur intégration et de la transition au sein de l’escadre du RMCC. After a survey that has been held during the first semester, the authority of CMRSJ were able to identify a few problems that the OCdt had when they arrived to RMMC and they asked them what could have had been done differently. All the officer-cadets found that the presentation was really helpful, not only for them to express their thoughts, but also for the future Officer-cadets who will arrive in Kingston next year. After the presentation, a lot of good ideas and suggestions were given to M. Maisonneuve in hopes that the integration of future OCdt will improve every year.”

RMC English majors visit Toronto to get a taste of the theatre. 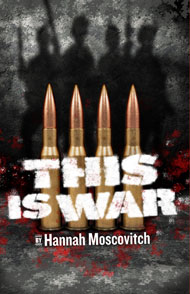 It is rare that RMC English majors get to leave the campus, let alone Massey, for their studies. However, last Friday, Jan 18, we had the opportunity to shed our uniforms and escape (if only for one night). Thanks to generous and much needed funding from the RMC Foundation, fifteen students and a few professors were able to make the journey to Toronto to see “This is War”: a play by Hannah Moscovitch that focuses on the difficult lives of a few Canadian soldiers stationed in Afghanistan.

So off we went, travelling in style in our white DND bus, to the Tarragon Theatre in Toronto.

Upon entering the theatre we were instantly immersed in the setting of the play; the walls and ceilings were covered in desert cam-netting, and the set contained only a few wooden boxes. The Tarragon is not a large venue; our theatre probably sat less than one hundred people, but one of the benefits of such a theatre is that creates a sense of intimacy between the actors and audience. This was immediately apparent once the play began. One by one, spotlights focused on the stage, revealing the three principle characters: MCpl Tanya Young, Sgt Stephen Hughes, and Pvt Jonny Henderson. They take turns responding to interview questions from a journalist who isn’t really there. All we hear are answers; we have to infer the questions.

We gather that these three soldiers were involved in a traumatic, tragic, and questionable event that they either don’t know about or don’t want to talk about. Perhaps both. Not long after this introduction we are taken back to the main setting of the play, at a small FOB in Panjawaii. The story starts off with a light-hearted game of poker in the mess that quickly evolves to reveal the complicated nature of the relationships that exist between bored soldiers in cramped quarters.

The title of the play, “This is War,” may seem to be an attempt to make a sweeping generalization about the nature of war. However, the structure of the play suggests the exact opposite: that while war can be emotional, confusing, frightening, and exciting, it is, above all, an individual experience. We see the story unfold in three parts; first from the perspective of Tanya, a sarcastic Master Corporal who joined the army to get away from a troubled life; next, from Jonny, the young private who naively falls in love with Tanya; finally, we hear from Sergeant Hughes as he talks about his kid back home and his broken marriage. These three story lines eventually come together to allow us to form a bigger picture of what is happening in the story. The only other character is a Medical Officer who, although he does not get a dedicated story line, plays a critical role in guiding and comforting these three soldiers as they struggle to deal with their part in the deaths they must face.

I don’t know what war is. I have never been to war, although it is likely that I and most of my peers will end up involved in war someday, in some capacity. However, Moscovitch attempts to give us a glimpse into such an incomprehensible experience and does so in stark, simple, yet intriguing manner. I know all of us who were able to participate in this thought-provoking event are grateful we were able to do so and hopefully these visits into the world of theatre will become a tradition which students can continue to experience. 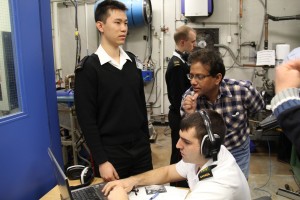 e-Veritas caught up with Cadets in AEE435, Aerodynamics of Supersonics, as they conducted laboratory experiments this past week. Using special equipment, the Cadets were able to observe the movement of supersonic air around a test model, and then, from those observations, calculate the velocity of the airflow.

Cadets Move To the Ranks

In what has become a common occurrence here at the College, three Officer Cadets left the College behind as they relinquished their status as Cadets and moved to the ranks. 25006 OCdt Thomas Braidwood, 25451 OCdt Martin Knoetze, and 25103 OCdt Tyler Billings received the epaulets of their new ranks from BGen Eric Tremblay in a small ceremony held this past week in Mackenzie Building’s Memorial Staircase.

“I know some of you have heard it over and over again,” the Commandant told the now ex-Cadets, “but it bears repeating. There is more than one way to serve, and we all need to lead the way, not just officers. So lead the way, walk the talk, and keep up the pace.” 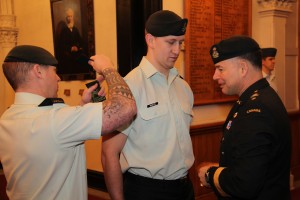 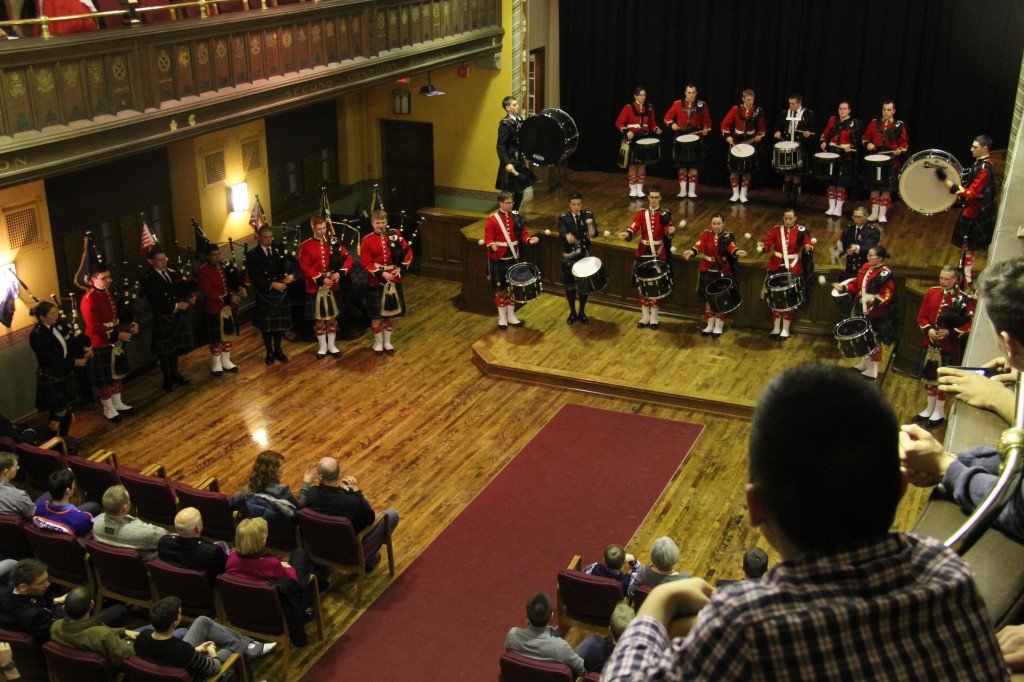 ALOY Cadets Get Look at Roots of Canadian Military 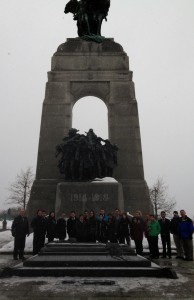 “Last weekend the ALOY (Aboriginal Leadership Opportunity Year) program went on a visit to Ottawa. The trip was to learn about the Canadian Forces and the people it serves. We learned about the history of both Canada and the Canadian Military by touring the Canadian War Museum and Parliament Hill. The ALOY program left for Ottawa on the morning of January 19th, and arrived at the War Museum. The ALOY Staff planned two guided tours that took the ALOY Members through the War Museum and the Museum of Civilization. The Officer Cadets of ALOY enjoyed the personalization of the live action stories from Warrant Officer Cote and Sergeant Taillon when we went through the LeBreton Gallery: The Military Technology Collection.

The next day ALOY checked out of the Holiday Inn Express, and departed for Parliament Hill. As we made our way to the Parliament, we passed the statues of people who made significant contributions to Canadian military history. In addition, we also took a few moments at the Cenotaph to remember the fallen soldiers, and to appreciate the labour put into the construction of the monument itself. The tour of Parliament Hill improved ALOY Members’ understanding of how the government operates. The tour brought us through the Peace Tower, Memorial Chamber, The Senate Foyer, The Senate (“Red Chamber”), The House of Commons Foyer, and finally the Library of Parliament. The last stop of our weekend was the National Aboriginal Veterans Monument. This monument was one of ALOY Member’s favourite moments because of how the creators of this monument represented the Aboriginals who fought and continued to fight for Canada. Overall, this Ottawa weekend trip gave the ALOY program a better insight on the reasons why members of the Canadian Forces continue to protect our Country.” 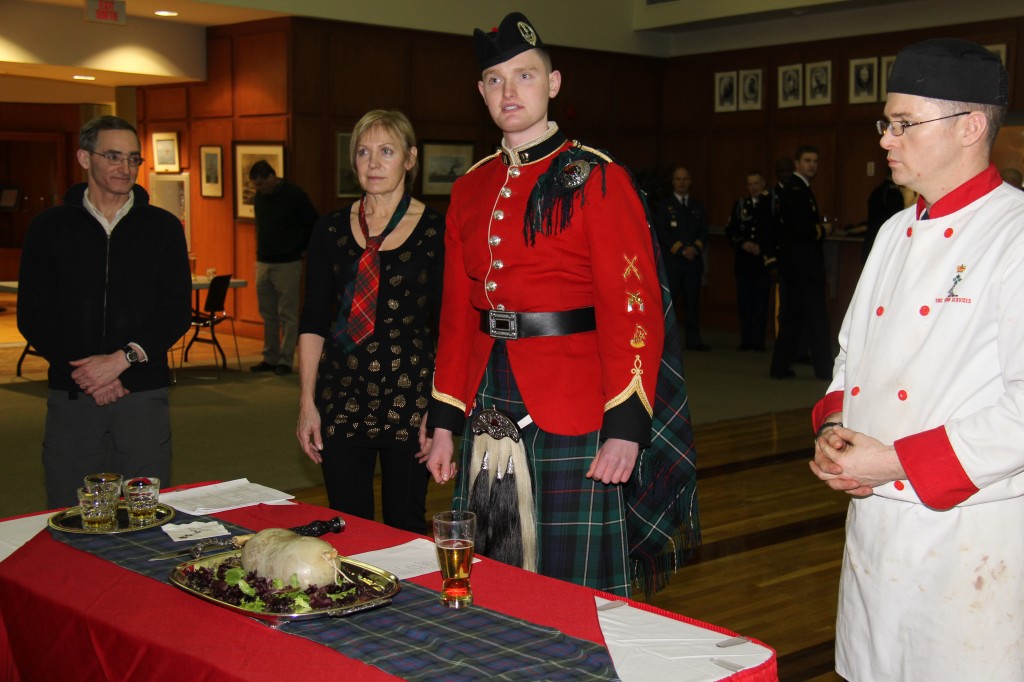 The Senior Staff Mess of the Royal Military College of Canada celebrated the Scottish Poet Robbie Burns this past week with a “Burns Supper” held on his birthday, January 25th. The supper is a Scottish tradition going back almost 200 years, and follows a basic format. It begins with the Selkirk Grace, followed by the piping in and cutting of the haggis, and the reading of Burn’s famous “Address to a Haggis.” The Senior Staff Mess supper also included a whiskey tasting, where those present learned the history of Scottish single malt whiskey, and then had the chance to sample four different whiskeys. This year’s event saw greater attendance than in years past, as members of the Senior Staff Mess, whether or not they were Scottish, all came out for a good time. 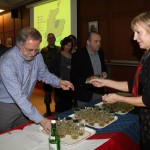 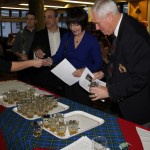 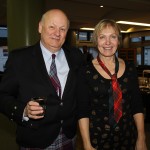 Unless otherwise indicated, articles and photos within the confines of RMCC by 25366 Mike Shewfelt.