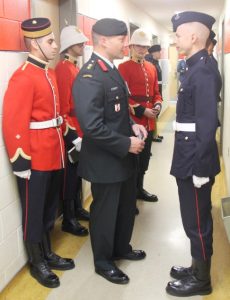 If there’s one thing that most ex-Cadets will remember from their time in the military college system, it’s being inspected by the Training Wing. When the Commandant, the Director of Cadets, and senior NCOs are around, your dress, your deportment, and your room are either perfect or they’re not. And while the exact format may change from year to year, the level of apprehension Cadets feel going into it certainly doesn’t and with good reason. It confirms their standard in a fundamental aspect of the Military pillar at RMC.

This year’s Commandants Inspection was undertaken over two days on the weekend of September 29-30, with the Director of Cadets, 20478 Col Chris Ayotte, running things on Saturday and the Commandant, 18777 BGen Sebastien Bouchard, doing so on Sunday. Every Cadet in the Wing was inspected along with their room (those away for varsity teams, etc., were inspected at an earlier date), and every Cadet was held to the same exacting standard.

Squadron standings from this event will go towards the Commandant’s Cup competition.

This past week, members from all 4 years of the Royal Military College of Canada took on the challenge of going through the selection process for the Sandhurst Military Skills Team.

The one week long selection period is filled with rigorous training that focuses on forming a team that is capable of adapting to, and overcoming, many of the physical and mental obstacles the reality of military training has to offer.

This year, the week started out with 75 Cadets from all four years trying out for one of the 18 spots available on the RMC Sandhurst Team. Their days started early and ended late, often complete with two periods of PT a day. The PT, however, is specifically designed to test Cadets and their physical/mental resilience.

I had the privilege of speaking to 29113 OCdt Still (Class of 2022) about her experience during the Sandhurst tryouts.

Initially, she explained that she went into the program with high hopes and not a lot of information about what she was going to be doing. She felt that Sandhurst would allow her to be in a team consisting of a lot of people with the same spirit as her, as well as personalities and characteristics she could adopt and learn from.

When it came time to do the workouts, she explained that they were extremely hard, yet encouraging. When things got hard, there came times when it became a matter of just doing it; all other distractions seemed to phase out of mind. But, when some people started to struggle on the marches or during the workouts, others were quick to keep them going. The idea that the selections are a competition seemed to fade.

“After about an hour of ruck marching,” she began to explain, “You just kind of… go. Sometimes there would be people who would fall back and others would walk beside them and encourage them. It was a competition, but everyone was there to help each other”.

But the difficulty of the training didn’t matter to OCdt Still- she was fixed on the idea of not giving up. She explained that it she always felt like she wanted to be there, regardless of how hard it was. She embraced one of the qualities of the Canadian Forces and RMC strives to implement into its members: Never give up. And, if you’re going to fail, make sure to fail with style.

Overall, she talked about the whole experience with a very positive attitude. She was not only amazed that she was able to accomplish such a feat, but also open to the idea that there is always room for improvement. While she made the team, she acknowledged that there’s a lot of work to do.

In terms of expectations, she’s looking forward to what’s ahead of her. On top of representing Canada at the end-of-year international competition, she has confidence that she’ll fit in nicely with the family she’s become apart of, which will, ultimately, only make her stronger.

Second Year Cadets Get to Know Their Strengths and Weaknesses

The Professional Development (PD) of September 26th consisted of Self Regulation and Leadership Scenarios for the second-year cadets. All second years gathered in the New Gym for this two-hour self development session. Cadets were instructed to consider which personality group they best fit into, the groups included: Technology avoidant, people pleasure, disorganized, work avoidant, check-list dependant, self-serving, and prisoner of the moment. Once cadets had identified with several groups they were instructed to split into their respective groups and discuss both their strengths and short comings. The resulting realizations were then shared with the entire PD class. The PD was intended to improve cadet’s ability to recognize these personality traits both in themselves and in their future subordinates. This PD seemed to have less military value than most as the personality categories were very limited, and it was hard to see the application in a military setting. However, the effort to bring new and interesting PD sessions to the Cadet Wing must be recognized as repetitiveness has been a long-standing critic of PD.

This week, the Fourth Year class attend a lecture in Currie Hall from Brigadier-General Boivin, a Military College graduate and currently the Deputy Commander of CANSOFCOM. He spoke to us about his experience with leadership in the Canadian Army and as a member of the CANSOFCOM community.

No matter whether someone is going to join the Army, Air Force, or Navy, part of the job of an officer is to be a leader and to inspire and motivate subordinates to accomplish the mission in a professional and ethical way. Recognizing that the Class of 2019 will be leading platoons and troops in about a year’s time, BGen Boivin imparted his key lessons on how to be an effective leader.

With a wealth of experience, the Deputy CANSOFCOM commander was able to illustrate his points with anecdotes of his various deployments. He gave the Class of 2019 a solid image as to what was expected of them after they graduated.

Following his lecture, the fourth years had close to another hour with the BGen to participate in an open discussion. Overall, as the Commandant mentioned in his closing remarks, it was an inspiring morning. 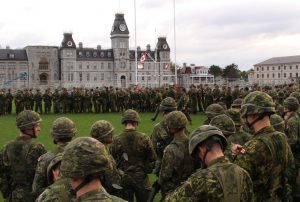 The Third Year class spent their Professional Development periods this week preparing for this weekend’s time at the firing range. Photos from that can be found here.

Court of Public Opinion and a Voice from the Middle Ground