Third Years Get Fireside Chat with Chief of Military Personnel

Rear Admiral A. Smith (RMC, Class of of ’84), Chief of Military Personnel for the Canadian Forces, spent time with the Third Year class during their Professional Military Training (PMT) session this past Wednesday to have a “fireside chat.” The Admiral, who had a similar talk with the Fourth Year class back in November, took the opportunity to pass on some of the wisdom he had gained during his career to the up and coming future officers at RMC. Chief among his advice was to “know your leadership style.” Cadet Recognized for Time Spent on the Hill

25533 OCdt (III) Veronique Trepanier, a Politics Major, spent last semester doing an Internship working with Senator Romeo Dallaire on Parliament Hill. During the Senator’s recent visit to RMC, he presented OCdt Trepanier with a plaque to commemorate the time she spent working there. An article from December 2011 on OCdt Trepanier’s internship can be found here. 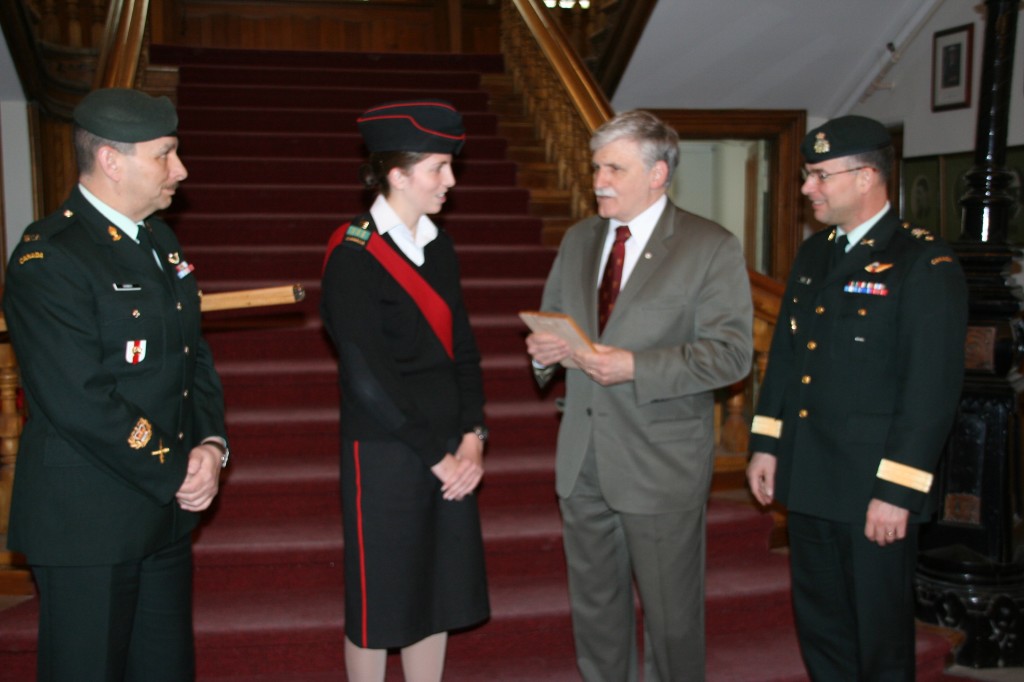 LGen Charles Bouchard was at RMC on March 7 and 8 to speak to staff and cadets. Organized by Dr. Randall Wakelam and the Department of History, LGen Bouchard gave two presentions – one on March 7 in English titled “Liberating Libya: A Commander’s Perspective” and one in French titled “La Guerre Froide et l’Aprèsguerre Froide : réflexions sur une carrière militaire canadienne.” LGen Bouchard was greeted by a quarter guard and proceeded to sign the RMC guest book. 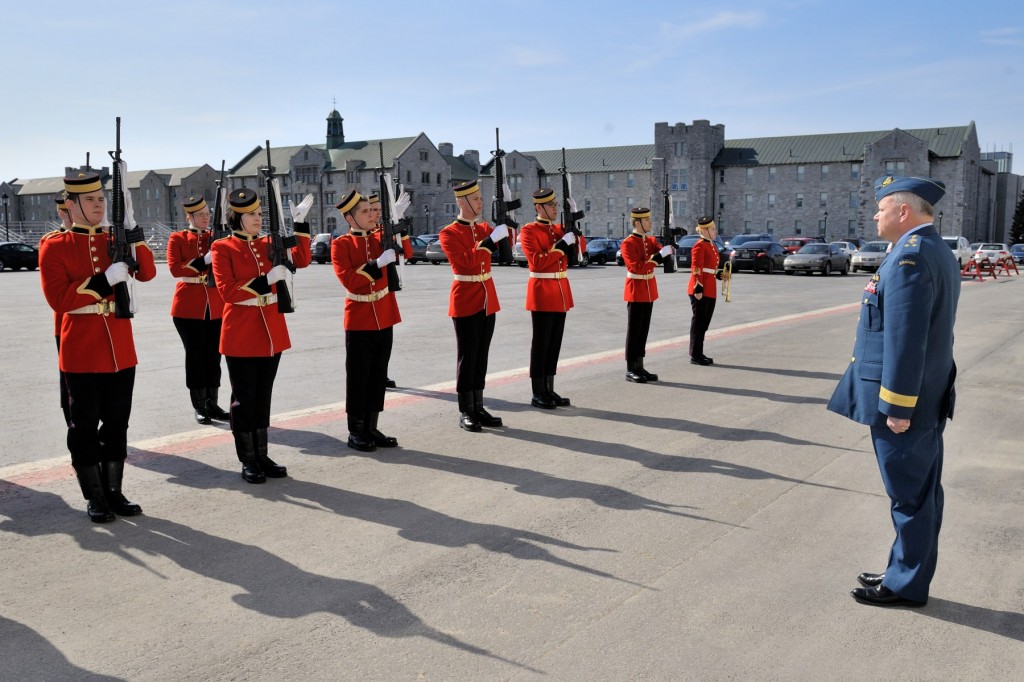 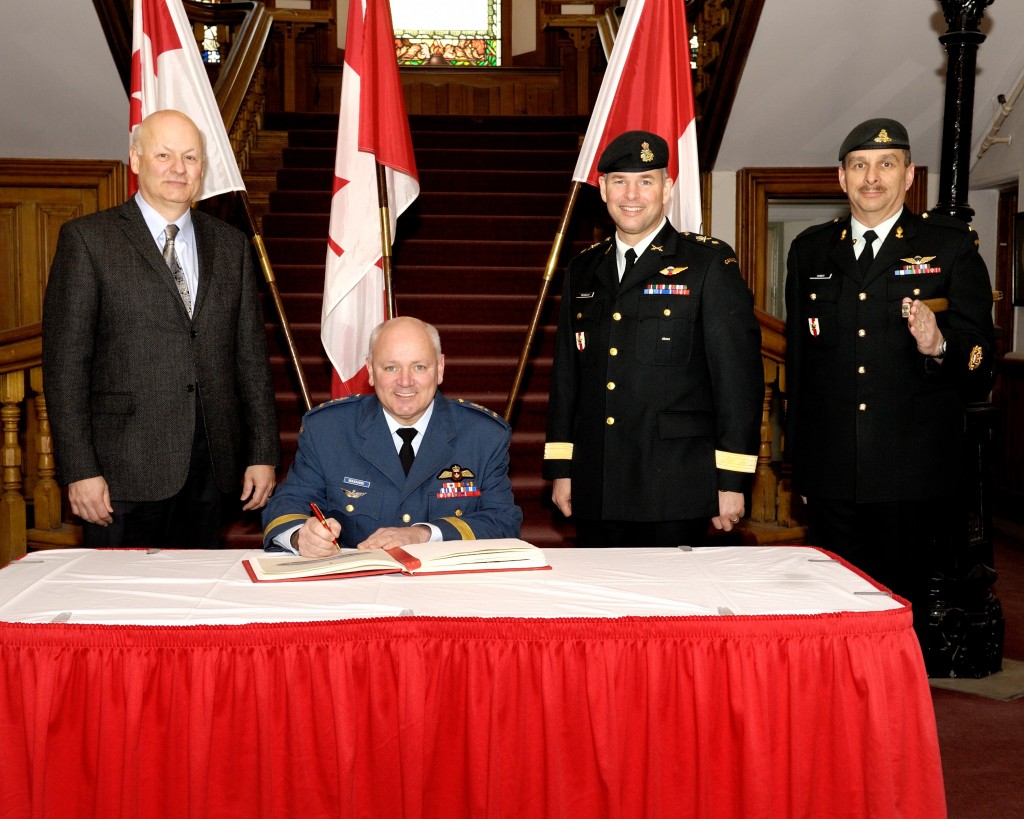 Every year at RMC, members of the graduating class gather by element for a mess dinner. With graduation only a few months away, this will be the last time for many of these cadets to meet as a group. As such, the evening was a celebratory affair, with good times had by all. Major General Yvan Blondin, Assistant Chief of the Air Staff, was guest of honor. As the opened the evening, he gave the cadets a look at where the Air Force is headed over the next few years, and summarized by saying, “It is an exciting time to be in the Air Force.” And the General was persuasive; he had this Naval Cadet convinced.

More photos from the evening: 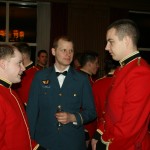 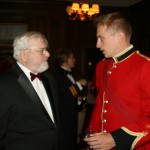 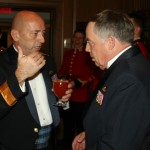 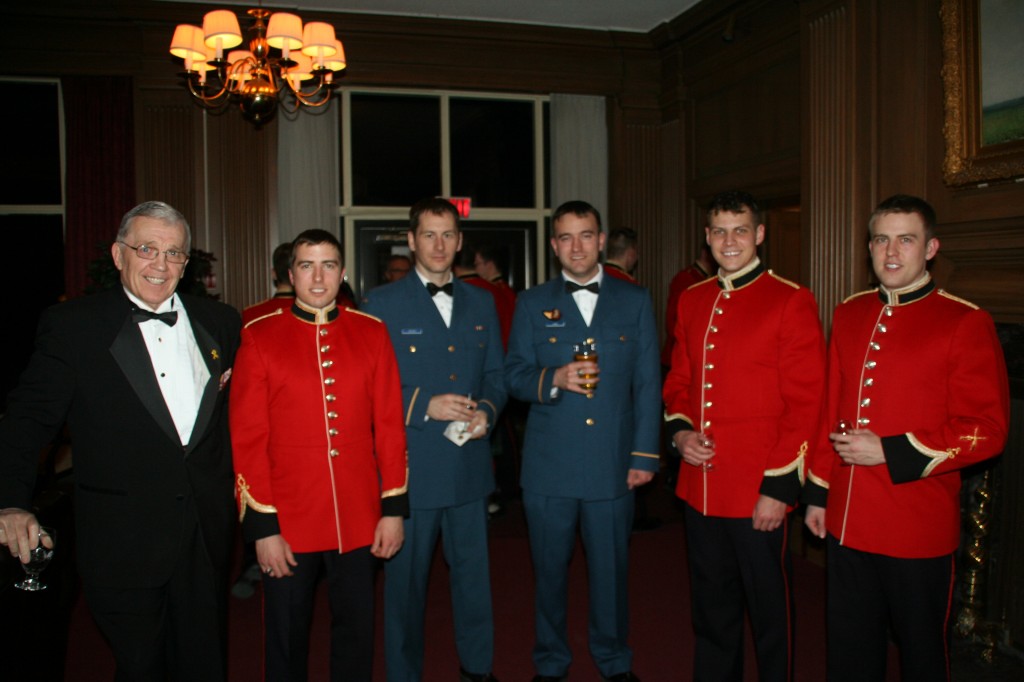 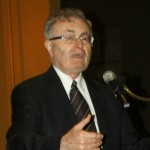 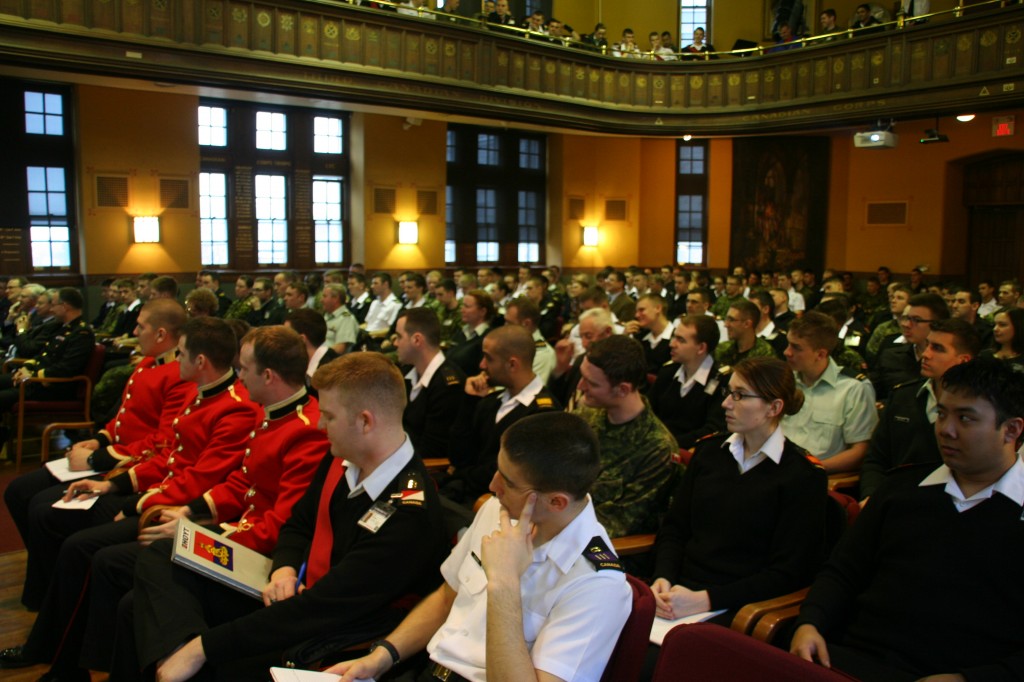 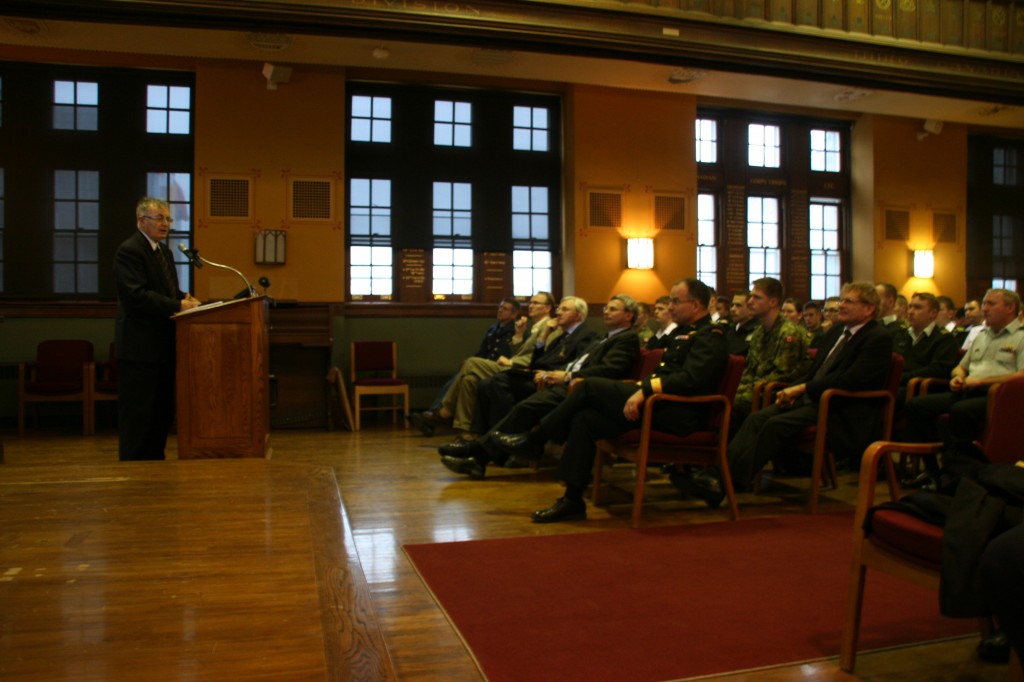 Shakespeare With a Twist: RMC Drama Club Takes the Stage in Currie Hall

“A play? RMC has a drama club?” Ladies and gentlemen the answer to this question is YES! Since late November the RMC Drama Club has been working hard in order to put together a play based on the life and times of, well, all of us! At first we were unsure of what the play should be based off of, but we all agreed that Shakespeare would be the only way to go. Finally the play was under way and we could begin.

After three months of hard work from the actors, writers, director, and tech crew, the opening night arrived. All of us were feeling first night jitters and there was an increased amount of anticipation for that first moment that the lights would go up. Throughout the night we all heard the tremendous amount of laughter coming from the not-so-distant audience which was only separated from us by a thin wooden door. As we entered and exited the stage throughout the night, the amazing feeling of accomplishment filled the air. When we took that final bow on the stage and heard the audience joyfully clapping and cheering us on, we all knew that we had accomplished the task we set out to do last semester.

We couldn’t be more thankful to all of those who came out to see the play and support us. It is because of this astonishing support that we are able to do what we love to do. Even though the curtain has already fallen for “Shakespeare in Scarlets,” we are already looking forward to next year’s play, and remember, “All the world’s a stage.” 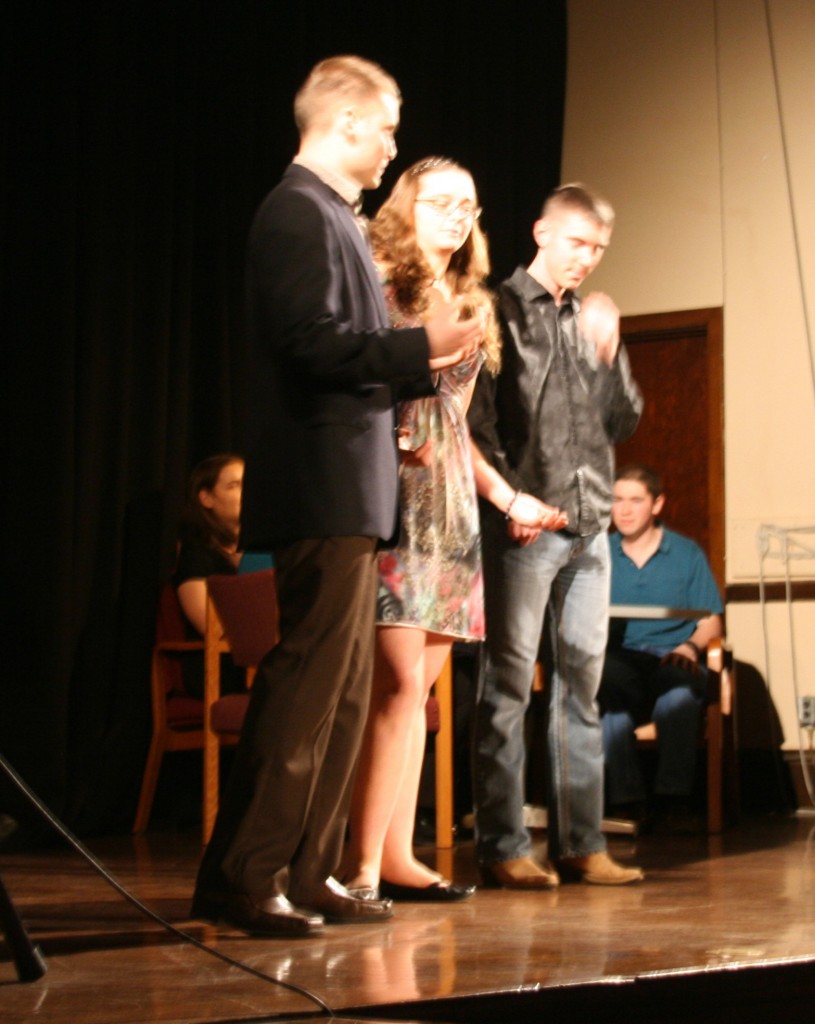 The RMC Theatre Club presented a tongue-in-cheek look at the college fraternization policy this past weekend. “Shakespeare in Scarlets” ran Friday, Saturday nights to pretty good crowds and is due to run again this evening (Sunday), Currie Hall at 7PM.

The play was completely written, performed and directed by cadets – including three original musical numbers. It was exceptionally well produced and congratulations are due to all involved including the on stage performers: “Shakespeare in Scarlets” has been on the radar since November. A great deal of support was provided by two staff members. This year’s Writer-in-Residence, Julie Salverson, a long-time  member of the Queen’s University Drama Department was a key figure. She has given drama workshops at the Royal Military College, involving RMC and Queen’s students for well over 15 years. Dr. Irwin Streight, also acted as an important liaison and advisor to the production crew.

It was obvious a great deal of time was spent working on this very entertaining play and all who saw it will agree that it was worth the effort.

The ageless Romeo and Juliet story with an RMC theme was the development of the various characters and the struggles involved with relationships within the college cadet fish bowl realities. In the main event relationship, the audience witnessed the roller coaster ride of Julie (magnificently portrayed by Meghan Thompson), an aspiring IV year, Top 4 candidate once she got involved with, Roger, a mature 24 year old but still a I Year also impressively portrayed by (II year) Aaron Jacques.

Three other different relationship types very familiar to RMC cadets are also covered in this 90 minute production and kept all of us in attendance well entertained from start to finish: a Queen’s-RMC pairing; a long-distance romance between a cadet and his high school sweetheart; and the IV Year with the Ex cadet who graduated the previous year.

All four scenarios had a value added touch that contributed to the success of  the show.

The Theatre Club has made an excellent bench-mark for future plays of this sort. Again, we congratulate all who took part in Shakespeare in Scarlets.  Rolande and I were very glad that we spent our Saturday evening in Currie Hall.

The Colour Party Competition Finals on Saturday, March 10th marked the culmination of months of hard work for all four teams involved. Below is a first-hand account of my experience as flag-bearer in the 1 Sqn Colour Party. 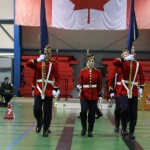 After a disappointing result in last year’s competition, the 2011 1 Sqn team was hungry for more. 25594 OCdt (III) Marina Lowthian took on the role of Colour Party Commander for this year’s team, and got the 1 Sqn team to work by mid-January. The team consisted of 25819 OCdt (III) Yanga Zhu as Queen’s Colours bearer, 26050 OCdt (II) Chawki Bensalem and 26032 NCdt (II) Kyle Reed as escorts, 26510 OCdt (I) Nathan Cave and 26348 OCdt (I) Zhi Zhen as orderlies, and myself as the College Colours bearer.

The 1 Sqn team drilled through frigid evenings and (psychotically early) mornings on the wind-swept parade square. Techniques were practiced, and practiced, and practiced. Despite the often miserable conditions, the team’s great humour and our commander’s enthusiasm made practices increasingly enjoyable as we improved. Special thanks to 2011 Competition winners 25424 NCdt (III) Adam Reece and 25377 OCdt (IV) James Ward for their support and assistance throughout.

As the competition preliminaries approached, the 1 Sqn team could be seen on the parade square every day, becoming increasingly confident. This confidence took a big hit at the official CP practice, where the drill staff’s evaluation humbled the team. The official rehearsal came as a shock to the team, but this would turn out to be beneficial as it pushed us to the next level.

The 1 Sqn team impressed the judges in the quarter- and semi-finals. We had improved remarkably in the week since the rehearsal, and were looking solid heading into Saturday’s final round. After finishing second to the 3 Sqn team in both of the first rounds by no more than two points, we knew it would likely come down to the wire in the KMCSC Fieldhouse. It did.

The qualifying teams drilled for perfection, with supporters from all four competing squadrons (1, 3, 7 and 8 Sqn), as well as Cmdt Eric Tremblay, DCdt Susan Wigg and other Training Wing staff looking on. The result of true commitment was on display, as all four teams conducted the routine with impressive drive and precision. 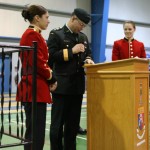 Tensions were high as the results were announced. After announcing the third and fourth place squadrons (8 and 7 Sqn respectively), the Cmdt built the suspense as he prepared to announce whether it would be 1 or 3 Sqn with the honour of carrying the RMC Colours. With countless hours of preparation hanging in the balance, the Cmdt made the announcement. “The winner of the Royal Military College Colour Party Competition is: 3 Sqn.”

I would personally like to congratulate 3 Sqn on their achievement, and also 7 and 8 Sqn for their efforts. Although the taste of a close second place is sour, there is comfort in knowing that the 2012-2013 Colour Party will be a model of precision and skill the entire Wing can aspire to. 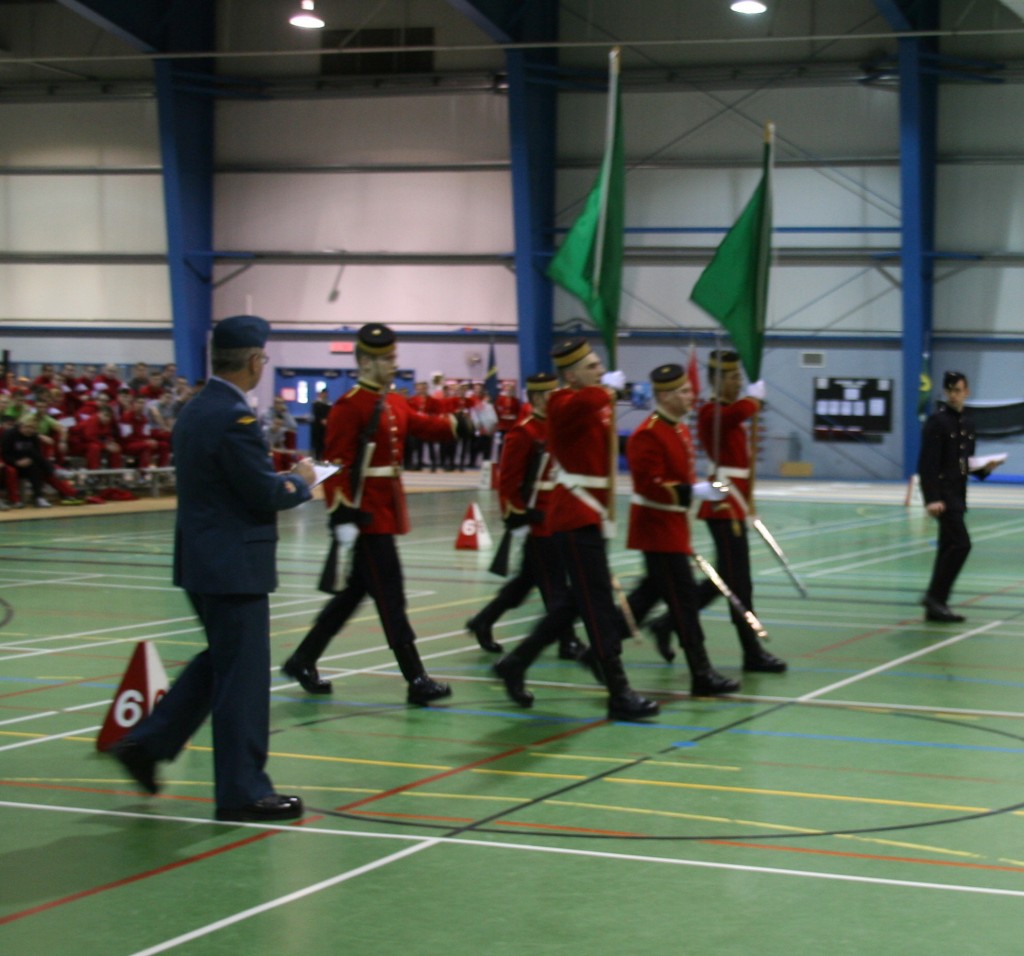 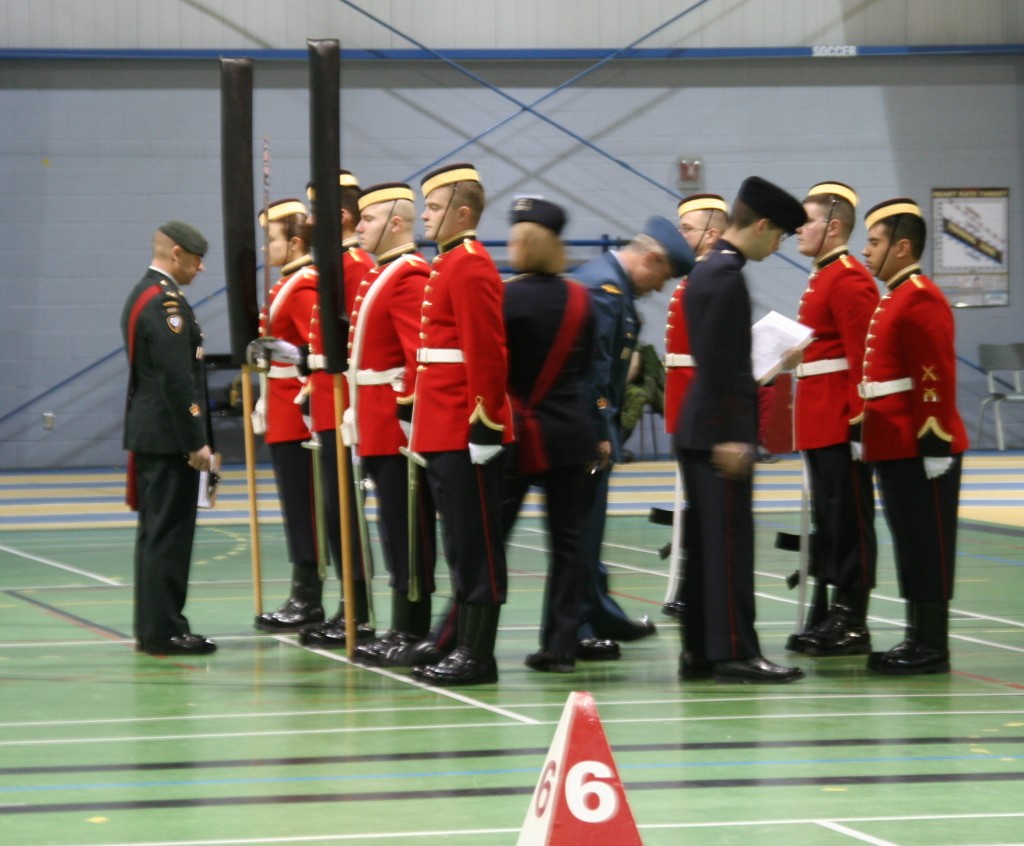 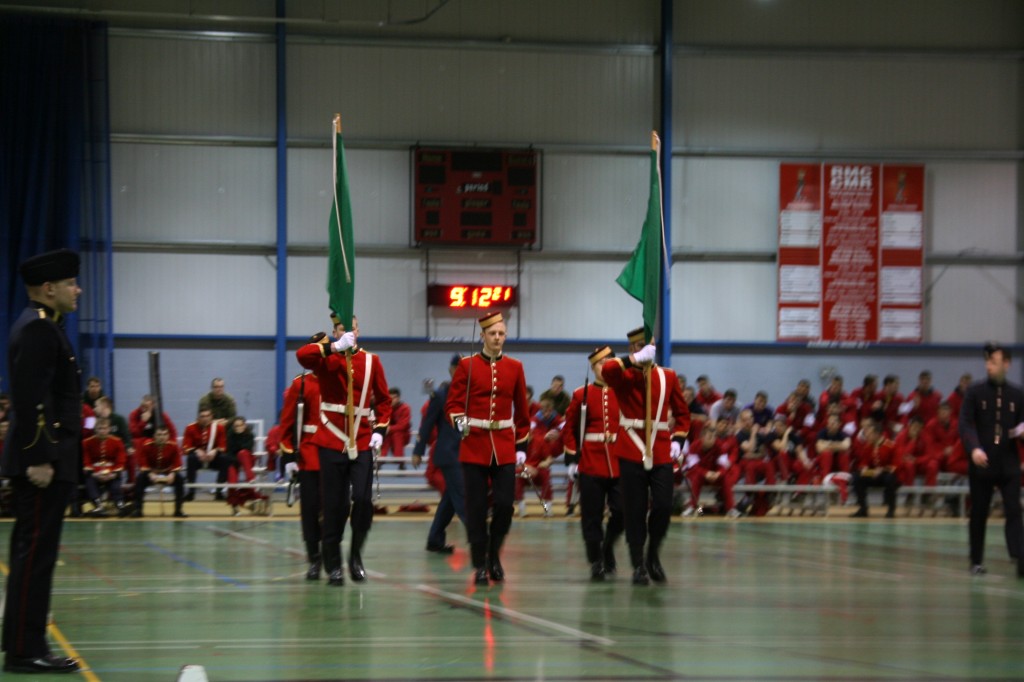 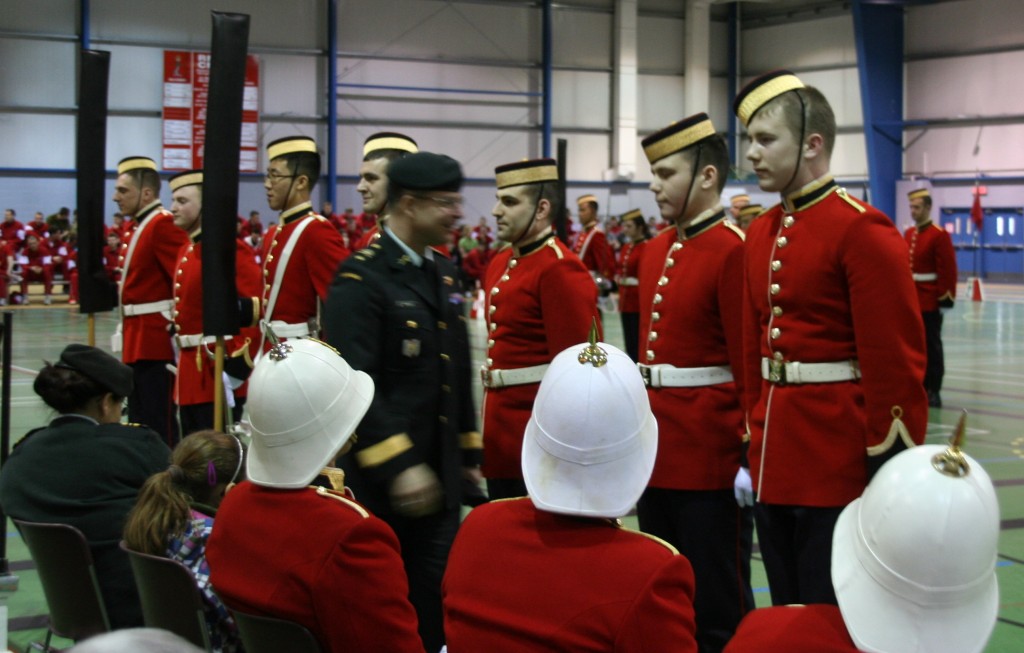