Thanksgiving weekend is a time for celebration and relaxation, and this year’s Stratford Trip had a little bit of both. The English Department hosted their annual trip to Stratford, ON, where twenty seven staff and students enjoyed the Shakespeare capital of the country, attending the performances of both Othello and The Merchant of Venice.

Departing early on Saturday morning, our group boarded the bus and started the five hour drive from the college to Shakespeare, ON, where we piled into the Shakespeare Inn, our normal host for the trips. With a quick turn-around, we were back on the bus and headed into Stratford to take in the town before the evening performance of Othello. Once we arrived, the students and staff had a few hours to explore the picturesque downtown before a group dinner at Fellini`s, a small Italian restaurant that did an excellent job satisfying even the hungriest among us. Directly after the meal, the group made its way to the Avon Theater, where we sat enraptured by a powerful rendition of Shakespeare`s Othello. The revolving stage and world-class actors had everyone at the edge of their seats, even our Physics and Civil Engineering students who came along for the ride. The next afternoon, The Merchant of Venice left nothing to be desired, and proved that a Shakespearean comedy might have a little less laughing than anticipated.

Overall, the trip was a great opportunity for interdepartmental bonding (as we had members from seven different departments, including Civil Engineering!), and exposure to world-class performances of Shakespeare`s classics. Thanks to the generous support of the RMC Foundation, the students that participated came away with a spectacular experience, and are sure to remember it for years to come. 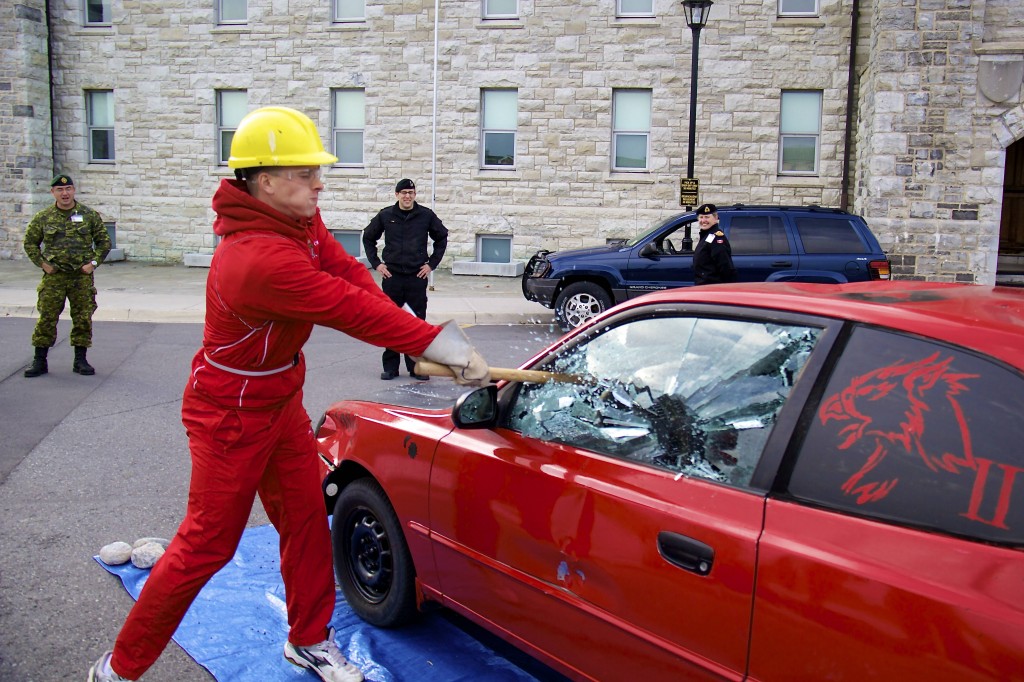 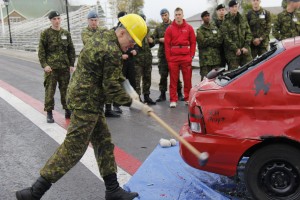 Cadet Wing taking time to relax and have some fun!

Midterms are well on their way and the officer cadets of the Royal Military College of Canada are finding their own ways to blow off steam! Wednesday at four o’clock pm, cadets came out to watch and participate in the 2 Squadron Smash for Cash! This initiative was put forth by CSL 2 Squadron, Officer Cadet John Kay (25912), as a way to raise money for the United Way Campaign. The 2 Squadron car was put on display and the cost was $1 for a hit on the body and $5 for a hit on the glass! Dozens of cadets came out to watch the event and take out their study frustration. That same night the History Department of RMC held a movie night featuring the movie “The Falklands Play” which is a dramatization of the 1982 conflict from the perspective of Margaret Thatcher, Prime Minister of England, her cabinet and her Chief of the Defence Staff. Many cadets came out to enjoy the film and two more films, “Joyeux Noël” and “The Dambusters” will be playing in November for the cadet’s enjoyment. The very next day, Thursday October 24th, the weekly TGIT found many officer cadets in the Cadet Mess for an Oktoberfest celebration. The night included the buying of large Steam Whistle steins, free German food, German music and more giveaways by Steam Whistle! The night was a huge success and a much needed break from the midterm grind. These last two weeks have been ones of sweat and toil and it is good to see members of the Cadet Wing taking time to relax and have some fun!