Above (taken at the Lower Pond): on the left in the safari hat is 6610 Dave ‘Coop’ Cooper (Fraser Flight and my first year cabin-mate), next to Coop in the blue is 6602 Jim ‘Jacques’ Cale (Fraser Flight), next to Jacques is 6604 Jim ‘Fats’ Carruthers (Fraser Flight), then 6611 Doug ‘Copious’ Cope (Fraser Flight), 6587 Doug ‘Army’ Armstrong (Cartier Flight) and on the far right of the photo in the black RMC cap is 6705 Matt ‘General’ Wilson (Thompson Flight).

From 7 to 9 September, 2018, a number of ex-cadets from the Class of 1961 entry year gathered at Royal Roads University outside Victoria, BC, for a reunion. It was 57 years almost to the day since we stumbled off the buses at CSC Royal Roads and just over 55 years since we graduated and moved to RMC.

As at RMC, part of our ‘trial by fire’ at Roads in that era was to run the Recruit Obstacle Course. And on 20 October 1961 we ran that course through a freezing mountain stream, full of senior-made obstacles, uphill to the upper playing fields, where there were more obstacles, then downhill to the lower pond. The race was gruelling and as I was exiting that lower pond, almost totally spent and looking like a drowned rat, a photographer from the local Victoria Colonist newspaper took a photo of me and it ran in the local paper that day. 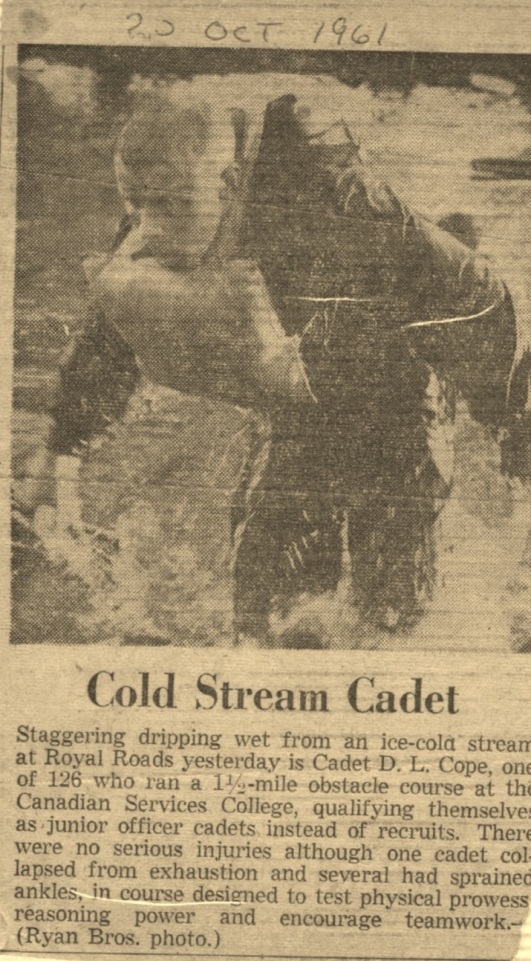 As part of the reunion I thought that it would be a laugh to have that photo retaken down at the lower pond at RRU. To see that this happened, the RRU Alumni Relations Manager, Mehgan Cabrera, arranged for their photographer to take a few photos on Saturday afternoon.

With me clutching a copy of the original photo, I was joined by 5 others from my class on the edge of the lower pond. [We just missed getting a fifth member of Fraser Flight into the photo but 6598 George ‘GAS’ Brown got lost on his way to the pond – no, he did not fall in.]

At the initiative of the reunion staff, Peter Mallett wrote an article on this event and it was published in the CFB Esquimalt Lookout E-magazine (http://www.lookoutnewspaper.com/volume-63-issue-39-october-1-2018/ see page 12)

At the beginning there was mention of re-enacting the scene in the original photo of me emerging from the pond at the end of the Obstacle Race. However, I told them that there were a number of reasons why that would not happen: I am at least 40 kilos heavier; I had no intention of getting into a freezing pond; and it could take some searching to find a WWII kapok life jacket.

A good time was had by all at the reunion and the incident at the lower pond at Royal Roads allowed me and my old comrades to relive our harrowing day in the cold stream along with other horrors of our first year at Roads. The 1961 CSC Royal Roads Recruit Obstacle Race and other stories are described in detail in my book ‘The Roadants’. (Available at the RMC and RRU Gift Shops or see www.dougcope.ca) 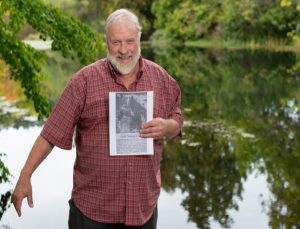 6611 Doug Cope with a copy of the above clipping standing in the same place almost 57 years later.