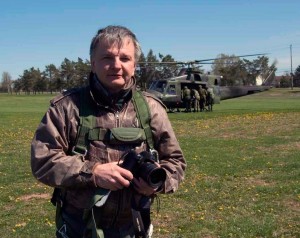 Gerry Locklin, a well-known face around RMC for many years is taking his retirement from this institution. I recently had the privilege to interview my friend Gerry in order to write this article. Also, all of the pictures featured herein are Gerry’s handiwork.

“There are two ways to leave RMC, in a box or feet first,” boast Gerry Locklin, “I’ve left twice because of illness, this time I’m walking out!” As RMC’s Art Director (Graphic Design), Gerry has been dubbed a living artifact by historian 8057 Ross McKenzie (RMC 1970) for his longevity in the position. He is retiring from his office in the Girouard Building, but spent the first 17 of his 27 years at RMC in the Mackenzie Building, thereby making him the longest ‘resident’ of the place. 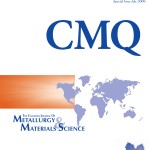 Originally from Peterborough, ON, Gerry studied at Sheridan College in Oakville before settling in Kingston because his wife was a member of the last graduating class of nurses from Kingston General Hospital, and as Gerry quips, “Her job paid better.” They have since come to love K-town and have raised both a son and a daughter here. Since he was a visual guy who enjoyed creating things telling stories with pictures, the field of graphics design seemed a natural fit. Over the course of his work Gerry has become an accomplished photographer in his own right, and has been listed in the local Yellow Pages since 1974 as a commercial and aerial photographer. He is also the managing publisher of Canada’s only journal on metallurgical research since 1998: Canadian Metallurgical Quarterly. After working at the Staff College and CFB Kingston for a little over seven years, Gerry came to RMC in 1983. His simple answer as to why RMC is that like many ‘he was sent here,’ though I suspect that the opportunity and the freedom to do what he loves doing may have had a small role to play as well. As for why he stayed in Kingston, he says ‘why would I want to leave where everyone wants to come to?’ Most of us have seen Gerry’s handiwork without realizing it. From the most recent battlefield tour posters to the picture behind the display case when you first walk into the base gym, Gerry’s work has been displayed on most of the walls found throughout the campus, to the College’s anniversary coin and the Commandant’s medal. As a freelance designer and photographer he has even created recruitment artwork for all of Kingston’s post-secondary institutions, often at the same time, at the same education fairs… something which brought no small smile of satisfaction and delight to Gerry and his eccentric sense of humour. His photos have long been featured in eVeritas, and in fact, Gerry and Bill, eVeritas’ editor, have been friends since the latter was Major Oliver, athletic director of RMC. There is a running joke between these two about a favour for a microwave deal which you would do better asking them about as I do not fully understand it myself.

In his tenure he has had close working relationships with the many Commandants who have passed through this institution. Gerry was more than once heard to say ‘at RMC he comes right under the Commandant’… as his office was directly under the Commandant’s and he liked the sound of it. Among the things that he has been called to do was create the Cyrillic alphabet for his Mac computer by hand as there weren’t any computer fonts available in those days for the Soviet visit in 1989. His handiwork had Marshall Losik and his entourage open-mouthed as the slide show was given by two cadets speaking Russian and Ukrainian. However, Gerry’s most memorable incident with a Commandant actually occurred at Gerry’s house – and he was not even at home!

He was working on a project for 8850 Rear Admiral David Morse (RMC 1971) which could not be done at RMC. When the Admiral came by one Saturday to pick up the completed project, Gerry was not at home due to other commitments, but had left specific instructions to his then 17 year old son, Graham, to hand the package to the Admiral when he comes to the door. Well needless to say Graham was expecting a well-decorated sailor to come calling for his dad’s handiwork and when the Admiral came to the door in civilian dress, Graham refused to hand over the goods. Despite the Admiral’s pleas, it was not until photo ID was presented and Graham’s dad was contacted that the Admiral was able to collect what he had come for.

Another incident involving the same Commandant was when Gerry was asked to design a new dormitory for the cadets. It was to be a 120 room dorm, but Gerry was given no plan, no visualization, or location, just a concept. So Gerry used his imagination, which as anyone who knows him knows how wild that can be, and came up with numerous ‘aerial photos’ depicting his creations. It was not until years later that Fort Brandt was built, but it bears a striking similarity to Gerry’s original idea. Since then Gerry has called it ‘Gerry’s Hall’.

Can you spot the addition?

With his close association and intricate knowledge of RMC, it seems only natural that he would eventually lead one of his family members here. His niece, 24431 Laura Locklin (RMC 2009), was talking to him one Christmas about her plans after grade 13 and happened to ask him about RMC. Well, an hour and half later of conversation and her interest was perked. Gerry arranged for Laura to meet with Dr. George Akhras from the Civil Engineering department, and that turned out to be the swing vote for determining her future career path. She graduated as a Civil Engineer and is currently an AERE Officer, very much enjoying the adventure of a career in the CF. Gerry was very proud to make her diploma this past year!

Besides Laura, Gerry has had the opportunity to forge bonds with other staff and students as well. Of note were his strong ties with 17863 Jonathon Knaul (RMC 1991) when Jonathan was at RMC, he mentioned Gerry in the dedication of his PhD thesis, as the one who “never let him off the hook!” Also 20398 Jeff Szumlanski (RMC 1996), who interestingly enough, as a Major ended up buying a house next door to Gerry, but admittedly had second thoughts after the ‘hard time’ that Gerry had given him as a cadet.

One thing that will always stand out in Gerry’s memory is on skylark in particular which happened to one young cadet. From his old office in Mackenzie building he could look out onto the parade square. On one particular foggy fall morning, he was watching as the fog thinned and revealed a bed, a dresser, actually an entire cadet’s room, on display in the middle of the square, complete with the unfortunate cadet sleeping the sound sleep of the inebriated in his bed. 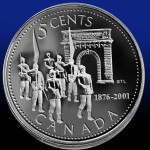 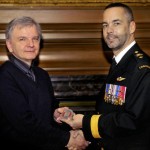 As comes with age, Gerry has had a couple of health scares over the last 5 years. He survived a rather nasty pancreatic tumour, putting him in the fortunate 1 in 2 million to do so, and a few years later a heart triple bypass, which has been the driving reason beyond not his retirement, but his slowing down and reassessing his priorities. He actually credits comedian Lorne Elliot with saving his life. There Gerry was, eating a McDonald’s hamburger, and listing to Lorne being interviewed by Shelagh Rogers on a rebroadcast of CBC radio’s “Sounds like Canada.” Lorne was describing the symptoms which had let up to his recent heart attack when all of a sudden Gerry realized that he, too, was feeling those same symptoms. Needless to say a quick trip to Kingston General Hospital, his suspicions proved correct and he was booked in for immediate surgery. He has since had the opportunity to talk to Lorne and thank him personally, as well as appear on Rogers’ program on CBC to share his story. 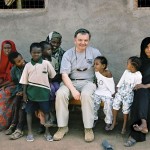 Those who know Gerry also know that he is heavily involved with helping disabled children in Africa. He is the Chair of the Board for BethanyKids (Canada) which works alongside African Inland Mission to spread the Good News through giving medical care to children with disabilities throughout the east African region, based primarily out of Kijabe, Kenya. This all began when a friend of his, Dr. Ivan Stewart, one of the founders of BethanyKids, asked him for some help with graphic design for the organization. Fifteen years later and numerous trips to Kenya, Gerry is thankful for the opportunity to assist and looks forward to devoting more of his time to the organization in the years ahead. As an aside, it was through Gerry’s work with this organization that I came to know him, and through his contacts that I was able to spend a semester abroad with my wife doing missionary work.

Gerry, who has been a professor at St. Lawrence College for the past 12 years, is simply ‘redeploying’ into a teaching role, which is something he originally began doing as a way to keep working while working around repetitive strain injuries. Officially speaking, he will be around the campus until October, but with leave that needs to be used up, he will barely be seen for most of 2010.

You might say his parting words are something he learned as a child, ‘Don’t cry because it’s over. Smile because it happened.’ – Dr. Seuss

To a good friend and talented artist, you will be missed around the campus Gerry, but He has other plans for you so we know you will always be in good hands.  Gerry Locklin <locklin-g@rmc.ca>