This past Friday, the Royal Military College of Canada commissioned the Class of 2019 at the annual Commissioning Parade. This is the moment that the Cadets have worked for all through their time at the College, when they cease to be lowly Cadets and take their place as junior officers in the Canadian Armed Forces.

The event started at 9am sharp with the marching on of the graduating class and a large contingent of 21 Cadets from each of the College’s 12 squadrons. As the 4th years marched on, there was a wave of pride that flowed over the parade square; the spit-shined boots, high-held chins, and crisp uniforms were awe-inspiring.

Soon after, the reviewing party arrived, including the College’s Commandant, 18777 Brigadier General Sébastien Bouchard, the Chief of Defence Staff, 15696 General Jonathan Vance, and the Governor General of Canada, Her Excellency the Right Honourable Julie Payette. The small contingent performed an inspection of the Officer Cadets on parade. 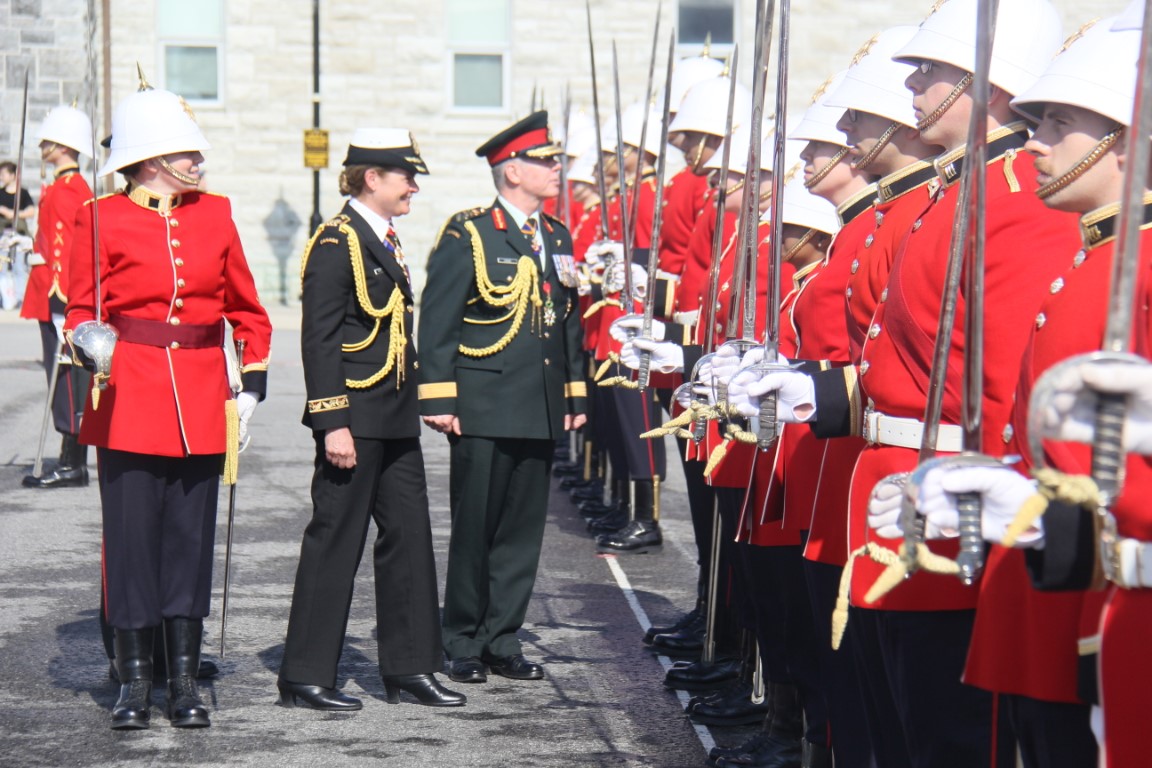 Following the inspection, the parade performed a ceremonial march past and resumed their parade positions. The incoming squadron and division positions were marched on and assumed their new posts, allowing the current Cadet Flight/Division Leaders to join their classmates in the graduating contingent.

Awards were presented and speeches were then made. Both BGen Bouchard and Gen Vance touched on the same theme: this isn’t a joke or a dream- you’re officers now. This is where it gets real.

“For the second year in a row, all the graduates on parade today have met the standard in the bilingualism pillar,” BGen Bouchard explained. “They have been successful in all Four Pillars of the RMC program. They are ready.”

BGen Bouchard also took a moment to express his “sincere appreciation” of all staff and faculty at the College, along with the family and friends of the graduates, whose collective support helped the graduates make it this far. To the family and friends in particular, he said, “You’ve been such a source of love and encouragement for them. Don’t stop. They’ll still need it as the move forward in their careers as officers.”

As an ex-Cadet himself, Gen Vance was well aware of the sacrifices the graduates have made. “I know just how much has gone into this,” the Chief of the Defense Staff said. “But you’re not as I was when I stood there on this same parade square. The world has evolved and so has your training. You are ready for the challenges of this dangerous, complex world we live in.” 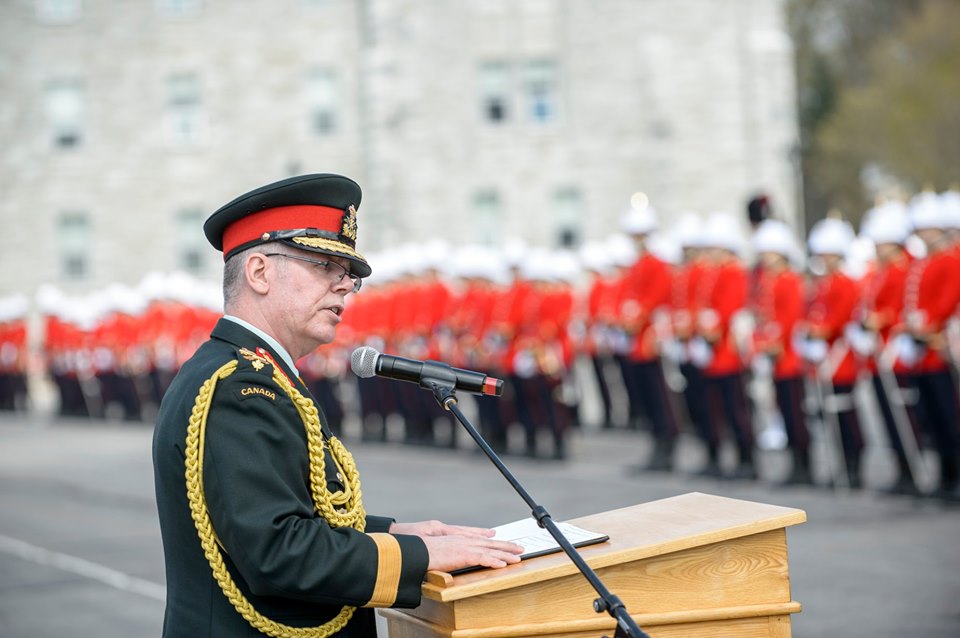 When this was done, various senior officers approached their assigned contingents and handed out the commissions to the Officer Cadets on parade. Following the handshake and picture, it was official: they were officers in the Canadian Armed Forces. The parade then performed four Feu-de-Joie’s and watched as the graduating class turned inwards and marched off the parade square.

Prior to the end of the parade square portion, 20478 Col Chris Ayotte, RMC’s outgoing Director of Cadets, was promoted to the rank of Brigadier General by Gen Vance. 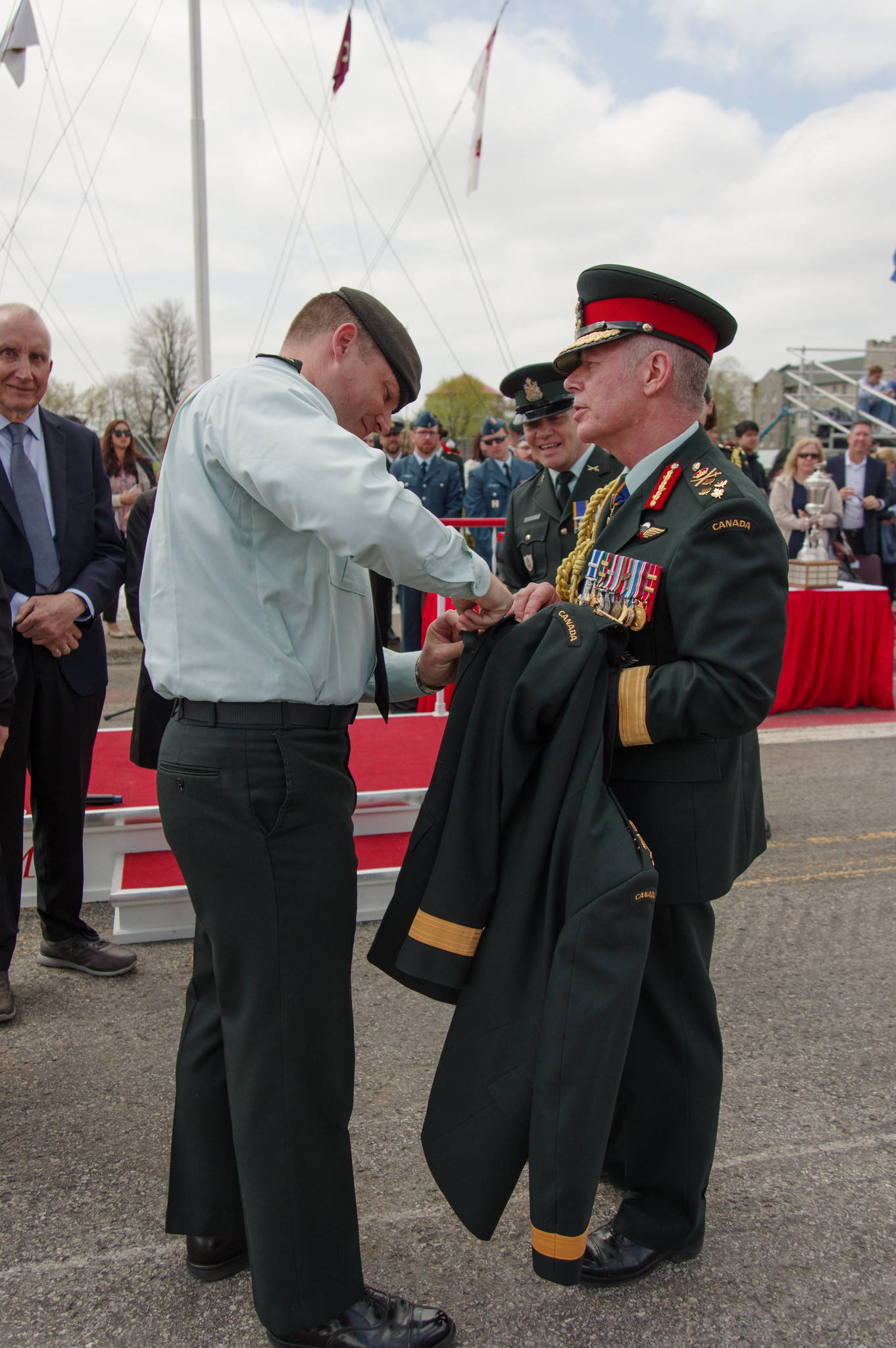 Following the end of the parade square portion, the new Second Lieutenants and Acting Sub-LIeutenants put their pillboxes on their swords and marched out of historical RMC Arch, indicating their official graduation from the Royal Military College of Canada. This was the same arch that they had marched under when they began their first year of school four years earlier.

The ceremony brought out a mix of emotions from everyone. Families cried as they waved to the newly commissioned officers while others smiled in silence. To many, it was borderline surreal.

The Officer Cadets who graduated from RMC this past Friday have earned it and should feel beyond proud of themselves.

I think I speak for everyone in the Wingwhen I say that we wish them the best of luck as officers in their respective trades and congratulate them for all of the hard work they’ve had to put into this experience.