Dedicated to the memory of all Ex-Cadets who have given their lives in the service of Canada, and to the members of the recruit entry class of 2017. We congratulate them on their success at the College thus far, and wish them well in the future. 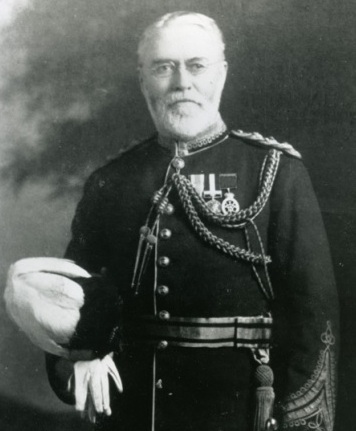 On the morning of June 24, 1914, the 37 members of the RMC graduating class of that year assembled to complete the closing exercises and receive their diplomas. Presiding over the ceremonies was Sir John Gibson, the Lieutenant Governor of Ontario, who during his remarks expressed great admiration for Ex-Cadets, but at the same time advised the new graduates to “start work soon and not loiter around”. The top-ranked man that year was No. 900 Sergeant William Fraser Hadley of Chatham, who over the three-year course had accumulated a total of 23,220 marks. Bringing up the rear was No. 893 Charles Bruce Pitblado, a Lance Corporal from Montreal who made it through with just 14,898 marks to his credit.

No one could have known it at the time, but the Lieutenant Governor’s parting advice to the members of the graduating class would prove to be especially prescient. Over the next four years, their lives would be overwhelmed by a cataclysm of events which twelve of their number would not survive. Just a few days after the graduation exercises, an incident in a far-off place which most Canadians of the time had never even heard of would set in motion a chain reaction of events destined to ignite what would become the greatest war in history, and one which would set the stage for everything else that was to follow in the 20th century.

By the time the men of 1914 received their diplomas, the Royal Military College had been open not quite 40 years, and just under one thousand new recruits had taken their first steps toward manhood within the institution. The stories of those who made up the Class of 1914 were documented in the “Stone Frigate”, the very first yearbook ever published by the College. Reading this book provides an opportunity to take a fascinating step back in history, and at the same time, more fully appreciate the timelessness of the RMC experience.

Though they hailed from virtually every corner of the Dominion, the cadets profiled within the book were the youth of a society that was vastly different than the Canada of 2017. Almost all were upper class boys who were products of the leading independent schools of the day. Apart from one lone Francophone (No. 937 Jean Baptiste Octave Saint Laurent) all the rest were Anglo-Saxons of the Protestant faith. Above all else, they were first and foremost loyal subjects of King George V, who had been raised to believe that it was their duty and their destiny to defend the greatness and security of Britain’s global empire. As the “Valedictory” contained within the book noted, “No matter what you are doing, you are charged with being Imperialists, you are charged with carrying out your duty towards the British Empire”.

The Valedictory also commented on the strength of the bonds that life at the College forged among those who experienced it, stating that:

“Class spirit is distinctive of the R.M.C. in its strength and power. In reality, it is the deep friendships which are formed and which enable the Class to have unity and purpose of action. It seems to develop gradually through the hardships of the recruit year and the steady work of the second year until the dignity of First Class is attained.”

For me, one of the most compelling parts of this book is a poem called “The Passing”, which immediately precedes the profiles of the members of the graduating class. The author of this poem remains unknown, but whoever he was, he did an eloquent and beautiful job of capturing the uniqueness of the mystique of the RMC experience, in a way that can be understood only by those who themselves have lived through it first-hand.

The global catastrophe that erupted barely six weeks after the members of the Class of 1914 received their diplomas would become the first time that the products of RMC were tested en masse in war. Judging by their collective record of accomplishment, the College must have done something right. Of the approximately one thousand men who carried a College number, just about all who were eligible to serve did, and 152 of their number made the supreme sacrifice. At Vimy Ridge, Canada’s greatest moment of triumph, two of the four Canadian divisions were commanded by Ex-Cadets. By the time the war ended in 1918, one Ex-Cadet had been awarded the Victoria Cross, and nearly 250 others had earned the Distinguished Service Order or the Military Cross.

Here, as it is presented in the “Stone Frigate 1914” is “The Passing”. The College today is a very different place than what it was when I was a cadet 40 years ago, and it almost goes without saying that that the differences are even more pronounced with the environment that prevailed at the time these words were originally written. Were the men of 1914 to be somehow magically transplanted into the RMC of today, they would no doubt be overwhelmed by the many changes that have taken both within the College itself, and throughout the larger society that surrounds it.

Even so, as the old saying goes, the more things change, the more they stay the same. Another obstacle course has been run, another crop of new recruits have proven themselves worthy of being full-fledged members of the Cadet Wing, another hugely successful reunion weekend has come and gone. And as we bask in the afterglow of last weekend’s joyous and memorable events and look forward to the future, let us all reflect upon the timeless meaning of these words, and the many things – both good and bad – that make our College such a unique and special place.

Associations; are they not the very theme,
Without which man could not exit, nor ever can ?
But sacred is the memory of the College boys we met,
Though all of gone their diverse ways
Though life’s strange path and tortuous maze;
For some, Life’s star has set.

As years roll on all things must change, and most of all do men,
But customs long established needs must outlive three score ten;
Thus thirty years have wrought but little change at R.M.C;
The work begin has been well done
By each Class gone and each Class come,
And by those to be.

How strange, how welcome is the thrill in some foreign land,
To hear a once familiar voice, to grasp a friendly hand;
Or strolling with the well known stride to feel once more that thrill,
A sounding slap on the back,
Hello, old man, from R.M.C. ?
Yes, I’ve been through the mill.

And so the bond of fellowship extends from sea to sea,
Is strong through each succeeding year, throughout the years to be;
And each looks back on R.M.C., each without regrets,
In life or death, in peace and war
There always is “l’esprit de corps”,
For all were once Cadets.

We have danced till break of day on a summer’s night in June,
Have seen the happy couples stroll beneath the warm, full moon;
Have watched the violet shadows grow pale in the morning’s chill,
And the rosy tint of another day
In scarlet and gold and pink array
Crown old Fort Henry Hill.

Then in the light of that other day we clasp hands in a ring,
With dew dimmed eyes and swelling hearts the last “Auld Lang Syne” sing;
The guests depart and in our hearts is a sad and deep regret,
As we try to smile, when we say good-bye
To the boys we love, with a choking sigh
For the boys we can’t forget.

We’ve seen the sun in a golden blaze, sink as it were to rest,
Flooding the lake with sparkling rays that lose themselves in the west;
We’ve seen the lake by moonlight with molten gold o’erspread,
The waves in simmering beauty break,
But can it be this very lake
That gives not back our dead.

Romantic yarns and tales about a hundred years to-day,
Are told of the old “Stone Frigate” at the mouth of Navy Bay;
For there it stands, gaunt sentinel, with its many rooms and halls,
Strange things it knows yet never tells
Of Feu-de-joies and College yells,
Within its four stone walls.

The little station still is there, the one so well we know,
Through which we came together and through which we must all go,
The first time just as strangers into strange and unknown lands,
The second time as brothers part
With brimming eyes and heavy heart,
And one last clasp of hands.

A thousand Cadets have gone their ways, gone to the ends of the earth
Each in his chosen walk of life to prove the truth of his worth,
Some have left indelible marks, in studies or sports or gym
And his name stands out in letters of gold as an honour befitting him
But the picture of each and every one whether lowly or of great fame
Is hung with a thousand brother Cadets and beneath is inscribed his name.

Some may be leaders of men for aye, and some may be easily led
But each with the other is comrade when all has been done and said
Some are dreamers by nature, but dreamers though they may be
Yet everyone is an integral part of his class at R.M.C.
Three years has worked its wonders and we see ‘neath a healthy tan
That the beardless youth has vanished, giving place to the set of a man.

And each one hopes some day to come and see it once again,
To cross once more that bridge we crossed in sunshine, snow, and rain.
Perchance a class reunion brings us each and all once more
To call up reminisces of old times by the score;
Surroundings long familiar recall those scenes long past
Within the old enclosure with its guns and shells amassed.

Oh the memory bring us back once more to those far distant days
When all of us were soldiers with a soldier’s rough-shod ways
Many are still soldiers who list for the bugle’s call
Waking us from our lonely beds to glory or to fall
“Truth and duty and valour” is an emblem of the brave
For a soldier’s bed is narrow as is a soldier’s grave.

Good-Bye my Alma Mater, fare you well old comrades all
We may meet again hereafter, for the world is very small;
The future lies before us and its ways we cannot tell,
But we part, and if forever – then forever are thee well
We have dreamed our dreams in the springtime, in summer, winter or fall
And we waken to grim realities and make answer to Life’s call.

……………..’Tis done but it stands in memory and will for all time to be
And the symbols inscribed in my heart are in gold, and the letters are R.M.C.