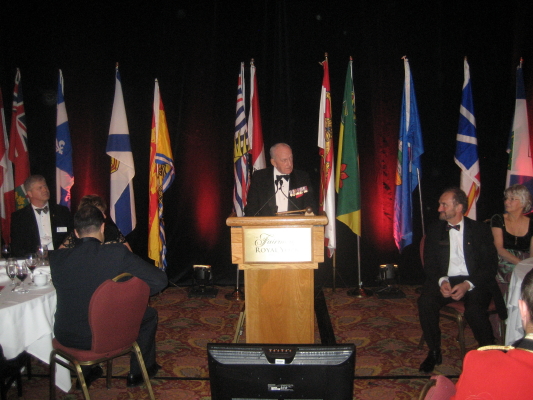 The Calgary Branch of the RMC Club of Canada welcomes with great anticipation the RMC men’s hockey team to Calgary over the Christmas holidays. The team will be participating in the Inaugural 2007 THAA Cup from December 27-29, 2007. The tournament is being hosted by the SAIT Trojan Hockey Alumni Association (THAA), with all games being played at SAIT Polytechnic. We encourage ex-cadets and families to come cheer on the team for its games as follows:
Friday, December 28, 2007 19:30 RMC vs. U of C
Saturday, December 29, 2007 14:00 RMC vs. SAIT

Calgary Area Cadets:Chris Theal (18524), President of the Calgary Branch of the RMC Club of Canada, and the members of the Calgary Branch invite you, a friend and your parents to the Calgary Annual Christmas Cadet Reception. This year, we will be joined by the RMC hockey team at the reception, as they are playing in a tournament here at that time.The event will be held in the Officer’s Mess of Mewata Armouries, 801 – 11th St. SW. The time for the event is from 1600 hrs to 1930 hrs (or so) on Saturday, December 29, 2007.

Some snacks and beverages will be provided compliments of the Calgary Branch.

Dress is Scarlets for the cadets, jacket and tie (or ladies equivalent) for guests.

Please RSVP Scott Treadwell at scott.treadwell@canada.weatherford.com or at 403-693-7667 by Wednesday, December 19 so we may properly arrange things.

Regards and best wishes for your up-coming exams.