My experience with formal Club functions outside of Kingston is still somewhat limited, so when I was asked to accompany Bill Griffis to the Toronto Branch Annual Dinner this past Friday night I jumped at the chance. And what I experienced is, well, what I’m coming to expect from Club functions in general.

There’s a sense of history to it when you sit down to eat in a room with people who were at one of the Colleges long, long before you were (and not to mention one who was there when I was and who I hadn’t seen in years). We swapped stories and more than a few laughs as we explored what had changed over the years and what has stayed (more or less) the same. You always know at a Club event that you are part of something much bigger than yourself.

17160 Stephen Kalyta was Master of Ceremonies for the evening and he kept things moving along. 8469 Jim Simpson, who serves on the Athletics Wall of Distinction Induction Committee, took the time to acknowledge 8074 Doug Smith, one of this year’s inductees, who was present for the dinner. And 5517 Skip Schelter explained for those present the story of 2761 Sydney Frost and the background of the award established in his honour. The award is based on performance in academics and military leadership and is presented annually to the Cadet deemed to have made the greatest improvement between First and Fourth years. It includes a free lifetime membership to the Club and would have been presented at the dinner to this year’s recipient, 27796 OCdt Christopher Kovacs Salazar; however, OCdt Kovacs Salazar had an exam to finish Friday afternoon and was unable to attend. The award will be presented at graduation.

“Col Sydney Frost, not only in his career but in his life and devotion to the College, is worth of recognition,” Skip Shelter said. “I hope that all of us, not just the intended recipient, can find a way to take meaning in that.”

One notable difference between this year’s dinner and those of other years was the absence of current Cadets. This year’s dinner happened to be right at the end of exam routine, so whereas ten or more Cadets have attended in previous years only one was able to do so this year. 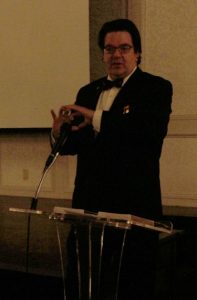 The highlight of the night was an address by 16442 Bill Griffis, Executive Director of the RMC Club. “When I first arrived back at the College in January it felt like family,” he explained. “And that’s what tonight is all about. We’re family.”

“We bring our members together, and we encourage and advance their welfare. I’m taking what I learned here in my time with the Toronto Branch and I’m making it work in Kingston. And it is working. We’re receiving great support from the Colleges and from the Foundation. The changes in the Club are also being recognized outside of that immediate circle. I’ve had people call me up looking to do business. So please, if you think you have something to offer by all means get in touch with me.”

The evening ended with the Roll Call of the Classes and if you’ve never experienced this it is truly something special. As current Cadets, currently serving ex-Cadets, ex-Cadets from all walks of life, and the spouses of those who could not be present stood to acknowledge their graduating class, I couldn’t help but be impressed. There were sixty-four years between the youngest class in the room (Class of 2019) and the oldest (Class of 1955).

The Club really is a family. Stephen Kalyta summed it up, “As ex-Cadets we have so much to pass on and we owe it to the Cadets coming behind us to engage and to reach out. Nights like tonight are what that’s all about.”