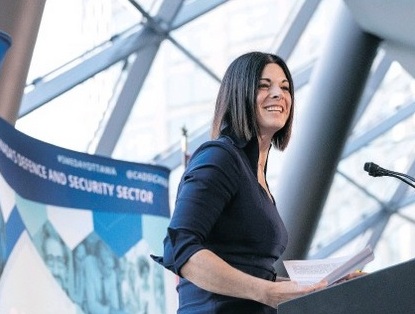 Christyn Cianfarani is President and CEO of the Canadian Association of Defence and Security Industries (CADSI) where her role is to lead an organization that represents the business interests of more than 900 member companies employing more than 63,000 Canadians and generating $10 billion in annual revenues.

The next stage of her career brought her to Canada’s aerospace, defence and security industries, where for two decades Ms. Cianfarani has blazed a trail for women in the sector. After starting as a proposal specialist at CAE Inc., a large Canadian aerospace company, she rose through the ranks, eventually holding leadership positions in strategy, R&D and business solutions.

In 2013, Ms. Cianfarani was the only woman to participate in the Government of Canada-commissioned “Jenkins panel on military procurement,” which has played a significant role in shaping modern Canadian defence procurement policy.

In 2014, she became the first woman to lead CADSI in its 35-year history. At the time, perceptions of the defence industry as being solely focused on arms manufacturing prevailed, and the sector was grappling with procurement-related issues as Canada’s Armed Forces looked to purchase hundreds of billions of dollars of equipment.

Ms. Cianfarani saw huge potential, and with the help of her team developed a bold plan to debunk myths and change perceptions. The association focused on the strategic significance of the sector, linking it to Ottawa’s broader innovation agenda. That hard work paid off when Ottawa released Canada’s 2017 defence policy, which recognized an innovative defence sector as a top five domestic priority. More than ever, the industry is now associated with high-tech innovation that benefits all Canadian society.

Ms. Cianfarani is also increasingly becoming an influencer in the wider business community on gender issues. Under her leadership CADSI has seen female representation on its Board of Directors rise from zero to 30 per cent.

In support of continuing education for officers and bureaucrats, she also lectures at Canada’s Armed Forces academic institutions.

EARLY, LASTING LESSON: Don’t be upset when the boys move in on the baseball pitch because they think that you can’t hit; knock it over their heads.

ON BEING DESCRIBED AS POWERFUL: I love it. 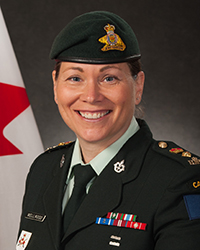 Born in London, Ontario, Maureen Wellwood started her military career at the age of 18 with the 1st Battalion, Royal New-Brunswick Regiment. After attending Royal Roads Military College and graduating from Collège militaire royal de Saint-Jean in 1994, she completed infantry officer training in 1995 and joined the Royal 22e Régiment. She served with the 1st and 2nd Battalions between 1995 and 2014, including various staff positions as well as assuming platoon and company command and the role of Deputy Commanding Officer

LCol Wellwood participated in three expeditionary operations overseas. In 1996-1997, she served in ex-Yugoslavia as an infantry platoon commander with the NATO Implementation Force (IFOR). Again in Bosnia in 1999-2000, she was the information operations officer for the 1st Battalion Royal 22e Régiment Battle Group with the NATO Stabilization Force (SFOR). Finally, she participated in Operation Athena in Kandahar, Afghanistan as the J5 Plans of the Brigade Headquarters of Joint Task Force – Afghanistan from October 2009 to September 2010. LCol Wellwood also participated in two domestic operations, including Operation Recuperation during the1998 ice storm in the Montreal area and Operation Lotus during the flooding near Saint-Jean-sur-Richelieu in 2011.

In her extra-Regimental occupations, LCol Wellwood was an instructor and Division Commander at the Canadian Forces Leadership and Recruit School from 2000-2003 and the Director of Current and Domestic Operations in the Headquarters of previously-named Secteur du Québec de la Force terrestre/ Force opérationnelle inter-armée (Est) (SQFT/FOI(Est)) in Montreal from 2007 to 2008. From 2014-2017, she worked in direct support to the Ministers and Associate Ministers of National Defence. Promoted to her current rank in January 2016, she is the first woman in the Canadian Infantry to attain the rank of LCol.

Maureen assumed command of the 2 Canadian Division Training Centre in June 2017 where she leads a team dedicated to the individual training of members of 2 Division of the Canadian Army. The team succeeds in qualifying nearly 2500 military members yearly in different areas of technical and leadership skills and is a key component to realizing strategic objectives such as Strengthening the Army Reserves and contributing to the generation of high-quality soldiers for employment on various tasks and missions.

LCol Wellwood is a Bachelor of Military and Strategic Studies from Collège militaire royal de Saint-Jean, a Master of Defense Studies from Royal Military College, and a Master of Leadership in Education from Yorkville University.

She currently resides in Ottawa with her spouse, Naran Leseigneur from Sainte-Anne-des-Monts, Quebec, and their two sons, Aidan and Félix.

EARLY, LASTING LESSON: Never give up: Failing is an opportunity to learn. I don’t recall failing much prior to my military career, but have since learned that many of the best accomplishments are the result of multiple efforts, and compounded successes. Not only does this knowledge encourage me to push my own limits, but it helps me be a better leader, able to relate to those who are dealing with a certain element of failure. Failure itself never defines a person; it’s one’s reaction to failure that is indicative of one’s character.

SUCCESS IS: Individual success is not only completely subjective, but is also incomparable, immeasurable and evolving. Right now, I think success is represented by the positive change one brings to the world.

HOW I FIND WORK-LIFE BALANCE: Learning has become my preferred hobby. There’s no end to the possibilities. My family brings a work-life balance: We enjoy camping, sports and reading together.