Gender in Defence and Security Leadership: The Canadian Experience “I’m 19029 Lieutenant Colonel Krista Brodie of the Canadian Army, and I have a confession to make: I have never spoken at a conference of this nature before; this is a first for me. And on the heels of Commander Eleanor Ablett’s very compelling presentation and particularly her comments with respect to complacency, I must be quite honest and confess that until last week I didn’t pay attention to statistics or policies pertaining to women in the Canadian Forces. I didn’t know what the numbers were, not even in the battalion that I’ve been commanding for the better part of two years.

I didn’t particularly care. I was blissfully unaware of the policy evolution that has both deliberately and accidentally shaped my experience in the Profession of Arms over the past quarter of a century. I do, now, have some appreciation of those things.”

Much more of a very compelling presentation 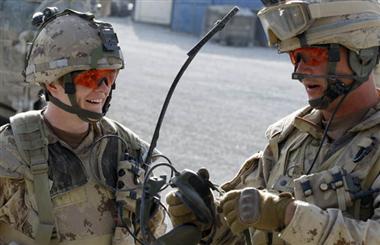 A soldier in a segregated society, 21554 Maj. Eleanor Taylor (RMC 1999) says she was greeted with curiosity and respect