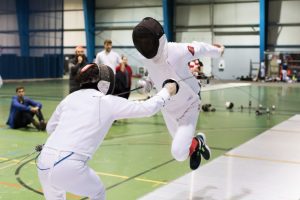 What to expect: “We are in a rebuilding phase this season. Besides the departure of our strong grads from last season, we also lost three experienced fencers this year unexpectedly. On the women’s team we have two open roster positions we still hope to fill, to round out our women’s foil and sabre teams, so I am still interested in identifying two well rounded athletic women who would like to be part of RMC Fencing. The teams are training hard, with lots of red practices, to bring up their skill development both technically and tactically. We still aim to have a solid season, with lots of personal best achievements and some solid medal performances too.” – head coach Patricia Howes

At home: Hosting the RMC Invitational 3-4 November 2018 @ the KMCSC

After finishing on the podium at both the men’s and women’s OUA Championships last year, the fencing team is looking to develop their young talent this year, while staying competitive with Ontario’s top fencing schools.

Head coach Patricia Howes also has a crop of upper year students to look to for impressive results this year.

“Epee siblings and fencers Scott and Jane MacGregor, Cecily McDonnell, and Byoungchan Kim,” Howes said are a few to look out for. “In Foil we are looking for strong performances from Fraser Duff our men’s foil captain, as well as fourth year Roxy Cormier. I also have a lot of third year foilists who are on the cusp of breakthrough performances, so it will be exciting to see what their hunger for success and drive and determination lead to this season.”

Howes dipped into the local market to recruit this year, as three of her first years are from Kingston.

“Key recruits this season are the Kane sisters and Cutting Edge fencer DJ Holtz,” Howes said. “Aly Kane is fencing foil while Jenna Kane is fencing sabre. We will see what these two multi-sport background athletes can do now that they are specializing in fencing. Holtz has been fencing with us for many years in our RMC community program Cutting Edge. He trained in Germany last season since his parents were OUTCAN.”

You can see the RMC fencers compete the weekend of 3-4 November 2018 at the RMC Invitational, hosted at the KMCSC.

Do you know a star athlete among RMC’s ex-cadets? Nominate them to be a member of the Athletics Wall of Distinction: https://www.rmc-cmr.ca/en/athletic-department/athletics-wall-distinction

Dr. Darrell Menard: How do I get started? “...start out low and progress slowly”