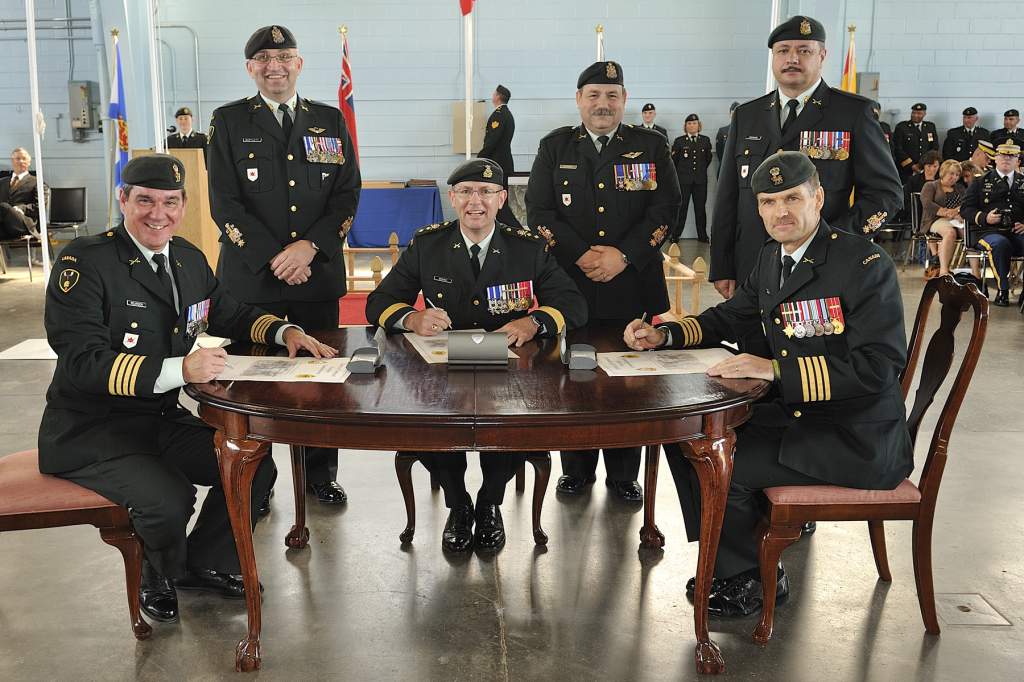 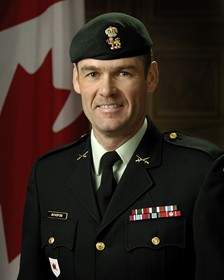 e-veritas: I understand that you would love to serve as Commandant of RMC or RMC St Jean.

14493 Col Paul Rutherford: Yes, I would love to be Commandant if I could be so bold. However the selection of key CF leadership appointments is an intricate process involving the CDS and his general officers and it is fiercely competitive. It would be an honour to return to the College in that capacity. As a cadet, one of our Commandants was 3572 MGen (Ret’d) Frank Norman (RRMC RMC 1956) –a fine General Officer and a gentleman. I remember being very impressed that Gen Norman allowed the cadets to visit and tour the commandant’s residence on the college grounds. It was a unique opportunity to see how a senior officer and his family lived and interacted with his command team. I recall a gathering of the cadet wing in Yeo Hall, during which General Norman explained to us that it was vital for future officers of the Canadian Forces to understand that they did have rights but more importantly had responsibilities – that has always remained with me. At that time, Colonel Anand was the Director of Cadets, a true disciplinarian who made his presence felt at the College. Cadets had the opportunity to display leadership on a regular basis and to attain cadet appointments such as Cadet Section Commander, Cadet Flight Leader, Cadet Squadron Leader, and Cadet Wing Commander.

e-veritas: What were your lessons learned as the Army Adviser, Canadian Defence Liaison Staff (London)?

14493 Col Paul Rutherford: I very much enjoyed my time as a Defence Attaché in the UK. It was a tremendous opportunity for any serving officer to represent their country abroad. A Military Attaché is a generalist who reports on issues in country which support Canadian interests. I enjoyed developing relationships at the military strategic level between the UK and Canada to better enable the dialogue between our two countries. Within the Canadian High Commission I enjoyed working with His Excellency along with the Political, Trade, Immigration and Consular sections. It was fascinating work and the Government of Canada has excellent professionals in their High Commissions. The key issues and challenges facing the UK at the time were their Strategic and Defence Review and ongoing operations in Afghanistan, Libya, and Iraq. There were many social events which enabled my wife and I to attend receptions, balls, cultural events and celebrations. Although we were there to meet and greet; the conversations led ultimately to business and a network of very good military and civilian contacts. Overall a very satisfying experience as a Defence Diplomat representing Canada.

e-veritas: You served with H7860 General Roméo Dallaire (CMR 1969) in Rwanda during the Hundred Day Genocide of 1994. Did you face physical danger?

14493 Col Paul Rutherford: I deployed to Rwanda as the Force Signals Officer from June to December 1994 and the Signal Squadron was responsible to establish a communications network for General Dallaire and the UN Force. We were all affected by our experiences in Rwanda and I know that my soldiers felt powerless in their efforts to make a difference in what was simply an untenable situation. As a result many of them did experience the effects of Post Traumatic Stress Disorder (PTSD). Also the health risks associated with this tour were significant and varied from malaria, to dysentery, to HIV/AIDS. The displaced persons challenge in the Democratic Republic of Congo created a humanitarian catastrophe for millions. Seeing over one million people in a displaced persons camp outside the town of Goma was something I was not prepared for. There were literally thousands of people severely affected by illness with dysentery claiming the lives of many. A key lesson learned from Rwanda is the training necessary to better prepare our personnel for the unexpected. Today mental resiliency is a key consideration in the training our personnel receive prior to deploying. Although I don’t discuss the genocide frequently as it has been some years I am very willing to provide my insights and experiences but I am more likely to do so when I meet with those with whom I served in Rwanda.

e-veritas: What are your best memories from Military College?

14493 Col Paul Rutherford: My best memory from Military College is the network of lifelong friends that I made which has remained a very important part of my life up to this day. For example, I knew 14356 LCol Mike Rostek (CMR RMC 1984), who is currently the executive director of the RMC Club, when he was a cadet at RMC. Mike is a friend. I was delighted to hear that he was selected as selected Executive Director of the Royal Military Colleges Club of Canada in the Fall of 2011. I remember Mike as an amazing hockey player, and a fun-loving guy. At the time, the rep basketball and hockey teams generally travelled to and from games on the same bus. I recall that the rep hockey players were the prima donnas who made fun of and ridiculed us lowly basketball players; we travelled on the back of the bus. Mike and I developed a friendship after RMC, when we served together in the Army. 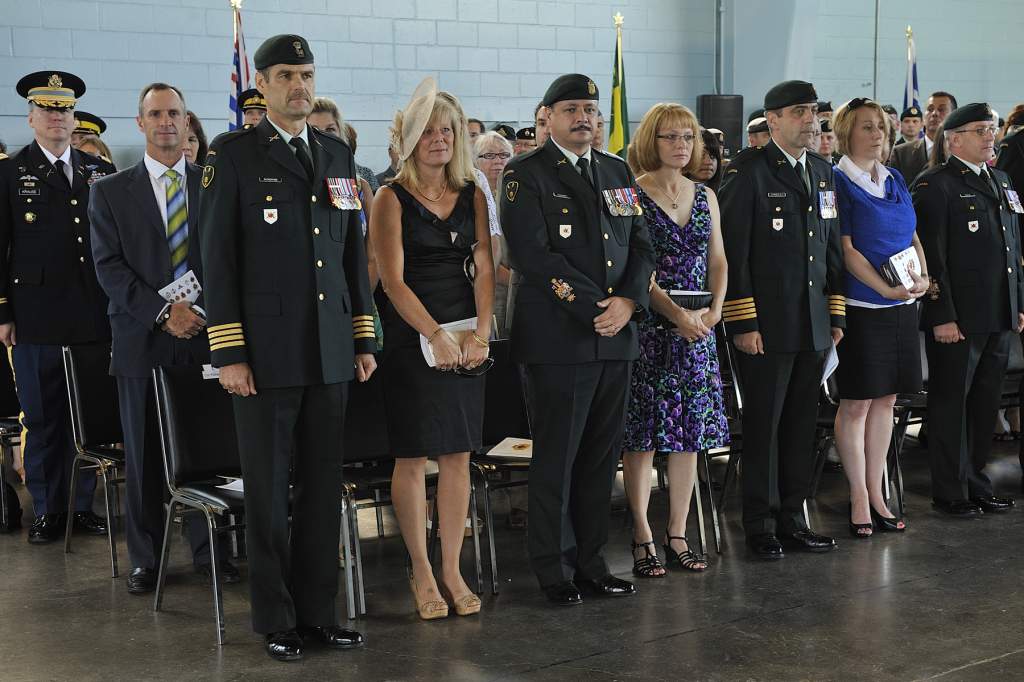 e-veritas: What are your worst memories from Military College?

14493 Col Paul Rutherford: I joined the Canadian Forces on 1 June 1980 and started at the Royal Military College of Canada in August of that year. My personal worst memory was failing first year and seeing my fellow classmates advance on without me. That summer, I went back home, and spent a lot of time with my Dad. Rather than undergoing military and leadership training, I worked in construction in my hometown. Over time, I decided that I didn’t want to leave the College on that note; I wanted to go back to repeat first year at my own expense. I’m grateful that someone reviewed my file and saw that I had the academic rigour and military potential to come back. I always turn a negative into a positive and add that in repeating my first year I accomplished in five what most manage to do in four! I had to work that much harder, since the academic and bilingualism pillars did not come easy to me. I needed to pay more attention in class and to choose studies over social activities. As CS Commander, I was a two bar man. I had 12-15 cadets under me to counsel, encourage and command. I graduated with a Bachelor of Applied Science in 1985.

e-veritas: What were your main extracurricular activities while at the college and what are they today?

14493 Col Paul Rutherford: I was very active in the rep sports program and played basketball and water polo during my five years. Some would also say that visiting my then girlfriend in New York State and now wife of 26 years was a significant extra curricular activity. The importance of fitness and a healthy lifestyle remain with me up to this present day. As a CF officer I feel it is crucial to be physically and mentally fit at all times. At 50 years of age I continue to include fitness and sport in my life, along with many family activities. Walking our black lab and Great Dane is great for my soul! I continue to play basketball with the base team and enjoy shooting hoops with my son, Trevor.

14493 Col Paul Rutherford: In short serving in the CF since I was commissioned in 1985. Locations where we have moved include Kingston (5 tours), Golan Heights Middle East, Germany, Rwanda, UK (twice), New Brunswick (twice), Toronto, Edmonton, and Afghanistan. 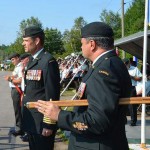 Over 32 years I served in various command and staff appointments. My formative years were spent with the Army’s 1st Canadian Signal Regiment from1985 to 1989. From 1989 to 1991, I was overseas with 4 Canadian Mechanized Brigade Group in Germany as the Signal Officer for the 1st Regiment, Royal Canadian Horst Artillery. From January 1995 until August 1997, I served on Exchange with the British Army at the Royal School of Signals.

Operationally, I was deployed with the United Nations Disengagement Observer Force in the Golan Heights in 1988. In 1994, I went as Officer Commanding the Canadian Signal Squadron for Canada’s deployment to Rwanda. From August 2006 until May 2007 I served as a Planner in the HQ ISAF in Kabul.

My staff appointments included Adjutant of 1 Canadian Division Headquarters and Signal Regiment, G6 for the Combat Training Centre, Directing Staff and Dean at the Canadian Land Force Command and Staff College, and Director of Army Doctrine in Kingston.

e-veritas: Have you had the opportunity since graduating to return to Military College?

14493 Col Paul Rutherford: Yes, I returned to Saint Jean last year for four weeks of intensive language instruction to earn a CBC. When I was at Military College, all officer cadets undertook second language training and it had been the practice to have officer cadets alternate the use of French and English weekly when carrying out their official daily duties. I had a Francophone roommate, Francois Guilbault. Since I remembered that cadets who befriended Francophones made significant progress, I made a point of playing golf with a retired civil servant -Jacques from St Jacques. I picked up a half dozen words each week. Since language skills are a significant asset for a military officer, I regret not paying more attention in class when I was younger.

14493 Col Paul Rutherford: Yes. This is the sixth year for Sears Operation Wish, and its goal is to help connect the approximately 2,500 Canadian deployed troops who are apart from their families over the holidays. In addition, the program also adds an element of thanks for troops who have returned home from Afghanistan and other combat missions. Members of the public were invited to sign banners, which were then shipped to HMSC Vancouver; and to missions overseas in Kabul, Afghanistan; and in Kuwait. Canadians can post their video, photo or written wishes on-line at www.sears.ca/operationwish.