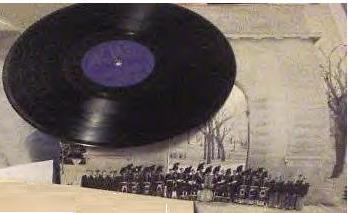 e-veritas: Outline your musical experience prior to RMC.

Mo Hewitt: In September 1945, with WWII just ended, I entered Hamilton Central Collegiate to begin grade 9. I looked around to see what extra programs were available and discovered the school had an orchestra. Unfortunately, there was no instrument music program and no ability to acquire an instrument on loan. Basically one had to take private lessons and purchase an instrument. I decided to be a trumpet player and by the end of the year, I was playing a mediocre 3rd trumpet in the orchestra. This story came to an abrupt end with the school burning to the ground the day after classes were finished! We then went to school on a shift system for the next 4 years and virtually all extra-curricular activities were cancelled. That was the (temporary) end of my music career.

e-veritas: Describe your entry To RMC.

Mo Hewitt: “Fast forward” to September 1951, when I entered RMC as a Naval Cadet. The was a historic time in a sense that our class brought the College up to full strength, with the New 100 having entered in September 1948. I enjoyed myself so much that I came within an ace o failing my first year.

e-veritas: I understand that RMC didn’t have a band.

Mo Hewitt: The College did not have a Band so for ceremonial parades, one of the Services provided a military band. They were always a stirring event.

Mo Hewitt: My first year summer training was at the Naval Base in Esquimalt B.C. and aboard second world war Frigates. I quickly discovered that a way to get out of a lot of work, like chipping paint, was to join the Cadet trumpet band. One Sunday morning, getting ready for the Church parade, we discovered that the base drummer had not shown up, so I volunteered. There I was all of 5’9″ and 135 pounds, wearing a leopard skin and carrying a very large base drum. I was probably the smallest bass drummer in the business.

The other vivid memory of that summer was that of the magnificent west coast RCN Band. They followed the Royal Marines formation, with the drum section in front rather than in the rear. The musicians were great. When putting on a show, the band was directed by the bass drum beat, – there were no vocal commands. It was an exciting summer.

e-veritas: Describe the formation of the first College Band at RMC.

Mo Hewitt: Early in my second year,(1952) there were discussions about forming a Cadet Band. As a second year Cadet, I was not involved in the discussions. However, the decision looked easy. It had to be a trumpet/bugle band or a pipe band. Because of the virtual absence of High School musical instrument instruction, there would not have been a sufficient number of trained brass and reed players among the Cadets to form a full military band. The decision was made to form a pipe Band. The instruction of Band members in pipes and drums was provided by part-time Army instructors. So away we went. The bass drum was taken, so I played the tenor drum.

I can’t remember any particular Band events in my third year. I seem to recall that the Band did not progress as much that year as we had hoped.

e-veritas: You were a leader in the band?

Mo Hewitt: In my final year,(1954-55) I was 3# Squadron Adjutant. I volunteered to take over the Band. (Guess who played the bass drum?) I felt it was very important that we consolidate the progress we had made over the previous two years, produce a Band that the College would be proud and do so in a way that it sure ensure its future on-going position in the Cadet Wing. My slogan was “We are going to have a good Band or no Band it all”.

During the year we played indoors several times at basketball games and the like. More importantly, we played before the final ceremonial parade of the year. The Band went through several manoeuvres, without any vocal commands, just bass drum beats, which I had learned from the RCN Band four years before.

e-veritas: What happened with the band after your graduation? Any tips?

Mo Hewitt: After Graduation, I lost track of the progress of the Band. I assumed that the Pipe Band continued but I am not aware when the Brass Band was added. My guess is that as the musical instrument instruction programs expanded in the high schools, more and more first year cadets joined with a background in brass instruments, ultimately making it possible (with additional funding), to form an integrated pipes and brass band.

It took one other thing to permit the two bands to play together. It was necessary to find orchestrations that had been adapted for such a band, since the pipes play in a single musical key, while military marches could have been written in any number of different keys.

Finally, as members of the first band, we welcomed the opportunity to originate a Cadet Pipe Band. But what we are immensely proud of is the Band of today. It is among the top military Bands in Canada and it is unfortunate that more citizens do not have the opportunity to see and hear the RMC Band.