Many joked that they’ll “believe it when they see it.” They may not be retiring but “the voice of RMC” is moving on. Bill and Rolande Oliver have stepped back from their work with Club and eVeritas after 23 years of service to both. And this past Wednesday, in front of family, friends, coworkers, and many of those they’ve helped over the years, they got a first class send off. 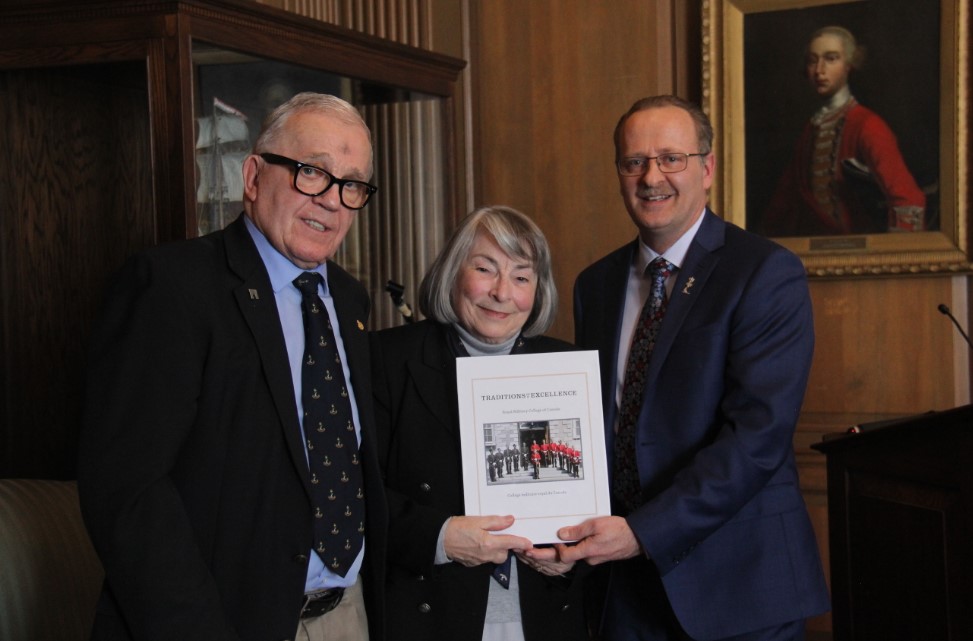 The ceremony began following drinks and lunch at RMC’s Senior Staff Mess. 14458 Dr. Harry Kowal (Class of  1984)) was the first of many who spoke of not just their role in eVeritas but of their connection to the College as a whole which, as he pointed out, goes much deeper. He then presented them with a book signed by the Commandant and other well-wishers.

19619 Karine Chayer, wife of Commandant 18777 BGen Sebastien Bouchard, spoke next on her husband’s behalf (he was in Mexico and unable to attend). To Bill and Rolande, she said, “We’d like to thank both of you for your unique story. You fell in love with the College. And unlike most relationships which are full of give and take, the College has got the most of if. We will never be able to express our gratitude.” She went on, “We have always been inspired by the team the two of you make. There would be no eVeritas without you. Your advice will always be welcome.” Col Bernier, RMC Deputy Commandant, presented Bill and Rolande with coins on behalf of the Commandant.

RMC Director of Athletics Darren Cates then presented Bill with an RMC hockey jersey. “We’ve got your name on it,” he joked, “but we left the number blank. We’re not sure what you’d want there, your College number, your phone number, or who knows.” 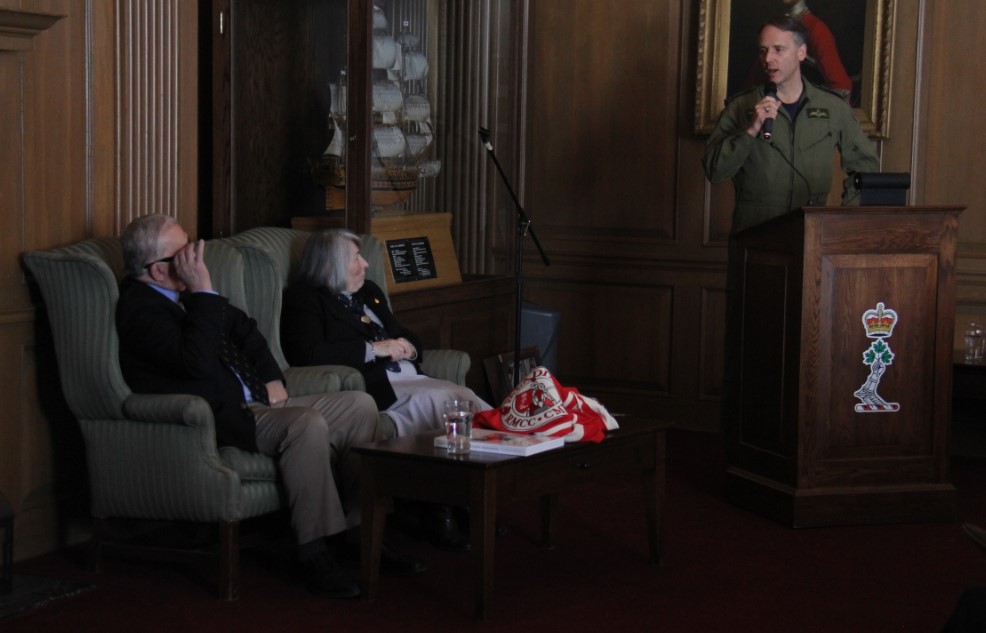 16888 Al Meinzinger, former RMC Commandant and currently Chief of the Air Staff, spoke next. “I first crossed paths with Bill at the base gym in Trenton,” he said. “When I arrived as Commandant I was delighted to find they were still very much part of the fabric here at the College.” 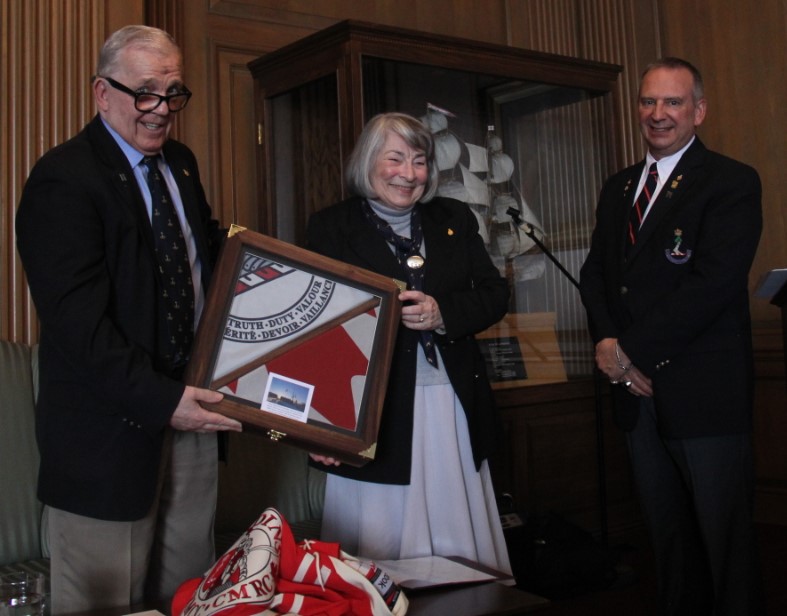 12059 Jacques Gagné, a past president of the Royal Military Colleges Club of Canada, presented Bill and Rolande with a small token on behalf of the Club, a College flag and a Canadian flag which flew at RMC in January 2019. 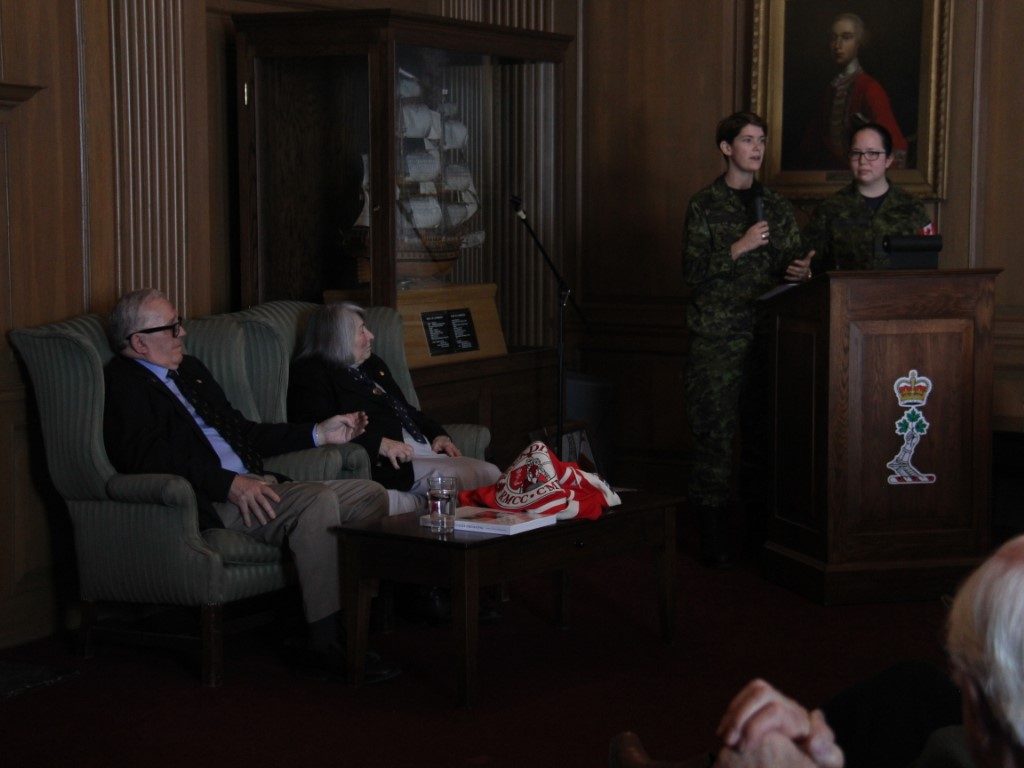 Obviously not everyone who wanted to be in attendance was able to make it and eVeritas received many letters and comments in the days leading up to the luncheon. (You can find them in their entirety here.) 26659 Danielle Campos (Class of 2016) and Denice Zoretich (Class of 2016) were on hand to read a selection of these letters (which as you’ll see are full of well-wishes, funny stories, and shared jokes).

A number of those whom Bill and Rolande had helped over the years also spoke, including 25366 Anna-Michelle Shewfelt, the new Managing Editor of eVeritas, who recognized the standard that Bill and Rolande have set for the publication and pledged to not only keep it there but take it a little bit further.

27832 OCdt (IV) Pablo Cardona acknowledged the “patient support” he received from Bill and Rolande. “I always thought you were kind of a permanent fixture of the College,” he joked, “like the Brucie statue.”

22051 Lt (N) Rob Medeiros , who has been in and out of the College over the course of his career in the Navy, thanked Bill for getting him into the military in the first place. “He called me up one day and I turned him down,” Rob explained. “He didn’t give up; he coached me through the recruitment process.” As Rob joked, “He also taught me the meaning of the term ‘quid pro quo.’ Before Recruit Term I was invited to Panet House. I arrived to find that I was welcome to stay as long as I wanted but here’s a list of names to call and a phone and you can do some fundraising for us.”

Anna Oliver, as Bill and Rolande’s youngest child, “drew the short straw.” “I know your love for the College is limitless,” she said. “And I was very surprised to hear you were stepping back from eVeritas. I remember when my father retired for the first time in 1994, he had accrued two years unpaid vacation.” She joked, “He spent that time watching the O.J. Simpson trial. It was mom who finally got him something to do at RMC.” So what are they going to do next, she asked? “I’m not sure, but I know you’ll do it together. We are so proud of you.”

Speeches from Rolande and Bill rounded out the ceremony.

In her usual calm and confident manner, Rolande expressed with great sincerity the appreciation she has of being involved with the Colleges and the Club for so many years.

“I’m sure many of you were waiting for this,” Bill joked when it was his turn. He thanked all those who were involved in planning the event and then pointed out, “I usually got the recognition for things like eVeritas. But Rolande did twice as much.”

As Bill also made sure to point out, they’re NOT retiring. “I’m almost embarrassed to hear people say, ‘Happy Retirement.’ We’re stepping back. Stepping aside.” However you look it, though, one thing is certain. They will be missed.

Special thanks to members of the Kingston Branch who allowed the retirement luncheon to “take over” their normal monthly get-together and to those members of the Ottawa and Montreal branches who made the trip to Kingston for the day. 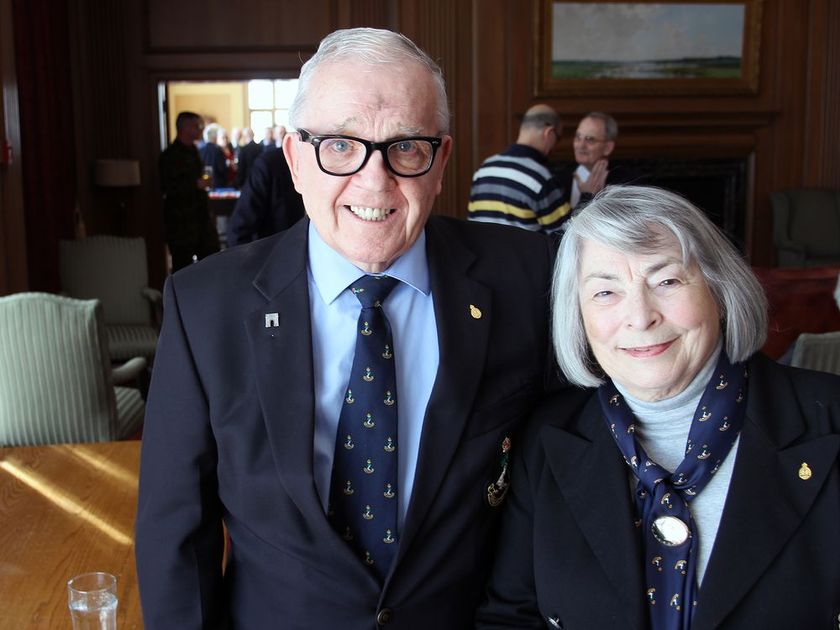 What the Whig Standard (Step Crosier)  Had to Say – Here

Bill Oliver was born and raised in Saint John, New Brunswick, as the fifth of seven children in his family. Rolande (nee Dery) grew up in Quebec as the oldest of eight. They both joined the RCAF in 1958 at the age of 18. They met and fell in love in the winter of 1959 when they were both stationed at RCAF Station Aylmer, Ontario. Weeks after they met they were engaged and then married in a small ceremony on June 13th 1959. Soon after getting married they were transferred to Winnipeg, where Willie was born in 1960 and Frances in 1961. Rolande stayed in the military for as long as she could; however, at that time women in the military would be released when they became pregnant. In 1961 they moved to 4 (F) Wing – Baden Germany where they lived for the next four years and where Marie and Lorna were born. Rolande ran the house and Bill was always active and competitive in sports like hockey and fastball.  Not much changed in this respect for the next 30 years or so.

From Germany, they were posted to RCAF Rockcliffe in Ottawa, CFS Chibougamau, Quebec, CFB Uplands in Ottawa (again), and CFB Penhold just outside of Red Deer Alberta (where Anna was born) before coming to CFB Kingston & RMC from 1978-1982 – with a six-month deployment, to the Golan Heights in between.

In 1982 he was commissioned, at RMC, from the ranks (Master Warrant Officer) to the rank of Captain.

This was followed by a five-year posting to CFB Trenton before returning to RMC in 1987; he was named Director of Athletics in 1988 and worked closely with the sports teams and was the OUA Men’s Hockey Convenor for three years.

In 1991 he was deployed to the Sinia, Egypt for a one-year deployment.

On his return, he bounced between Ottawa and RMC between 1992-95 working with various sports projects including CISM taekwondo championships hosted In Iran and the following year conducted at RMC.

He retired from active service CRA (compulsory release age) in 1995; by 1996 he was working with the RMC Club Foundation on a special project ‘attracting student-athletes’ for the varsity hockey team on a six-month trial basis. Later the role was expanded to include other varsity sports; this lasted for about six years. A number of Ex Cadets (men & women) many of whom at still serving in the CAF were the benefactors of this program.  Also, during this time period he filled the role of OUA Men’s Hockey Convenor for another six years.

The six-month trial ended up being 22+ years working at various times for both the Foundation and the Club in a variety of roles – including three different stints as the Interim Executive Director for the Club.

Throughout it all, Rolande has been by his side, fondly referred to with the title, ‘Mrs Convenor’ by the 16 hockey coaches in the league when she handled all the league paper work. Also, she was very active in the ‘Attractions’ role, in particular, dealing with potential female athletes and their parents.

Rolande is likely best known as the main translator for the Veritas magazine and for the for the past 14 years for e-Veritas. However, her biggest strength has been the ‘behind the scenes’ go-to-person taking care of the every day mundane details which have been vital to the success and popularity of e-Veritas.

Both Bill and Rolande have been dedicated to the College and the RMC Club over much of the past 61 years in which they have been involved directly or indirectly with DND.  This dedication is only surpassed by the love of their five children and five grandchildren.

Although they are stepping back from many of their usual duties at the RMC Club including e-Veritas, they insist that they are not retiring.

They have some travel plans for the near future; however, don’t be surprised to see them involved with some RMC and / or Club activities not too far down the road.

Bill & Rolande movin' on; what people had to say