“A gift that defines the College”

As I remember well from my time as a Cadet, you pass by the Wall of Honour every time you go to the gym. You also, hopefully, stop to read the plaques on the Wall. They exist, after all, to recognize the extraordinary contributions of those who embodied the values of Truth, Duty, Valour, and to inspire those who read them to be the best they can be. If you’ve never attended an induction ceremony, however, you won’t know the whole story.

The 2018 Wall of Honour Ceremony had a dual purpose. The first was to induct 2375 LCol Norman Bruce “Ike” Buchanan. Ike attended RMC from 1934 to 1939 and graduated as a Lieutenant in the Artillery. During the Second World War he distinguished himself in combat operations in three distinct theatres of war, for which he was presented the Military Cross with Two Bars. He is one of only twenty-three Commonwealth Officers to have achieved this distinction, as well as the only RMC graduate and only Canadian Artillery Officer in the Second World War to have done so.

Following the war, Ike served as the MLA for Charlotte County, New Brunswick from 1952 to 1960. He was also a successful businessman, and along with his partner Donald MacLeod invented fiberglass hockey sticks which were much sought after across Canada and which became the favoured sticks of the NHL.

LCol Buchanan also served as the Commanding Officer of the Carleton and York Regiment. He was known for motivating and inspiring his troops, assisting them with post-traumatic stress issues, and supporting their families all while continuing his trademark qualities of exceptional leadership and selfless service. He died in 2008 at the age of 92. 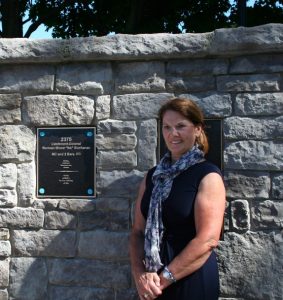 Ike Buchanan’s daughter, Gail MacDonald, and his plaque on the Wall of Honour.

As Ike’s daughter, Gail MacDonald, told those present, however, “You don’t know the man you’re honoring. We children turned out as well as we did because of my mother.” As she went on to explain, “My father would not approve of being singled out as a soldier, but he would thank all of you for being here.”

For 18777 BGen Sebastien Bouchard, “It is an honour to be here today to celebrate one of our greatest graduates. I didn’t know him, but this plaque is a testimony to him. I want Cadets to be inspired by this.” He acknowledged the seven members of the Buchanan family who were in attendance and assured them that they are always welcome to visit. Finally, he expressed his “deepest gratitude to the Class of ’63, for your legacy, this gift that defines us.”

The second purpose of today’s Wall of Honour Ceremony was, in the words of 5846 Peter Watson, “something that has never been done before.” The Wall was the gift from the Class of ’63 upon their entry into the Old Brigade in 2009. As part of the planning for it, the Class of ’63 committed to the Commandant in 2008, then 12192 BGen Tom Lawson, to supervise the selection process for inclusion on the Wall for a period of ten years. That period has now ended and so today the Class of ’63 officially transferred stewardship of the Wall of Honour to the Class of ’75. “This is the final element of the commitment we made to Tom Lawson,” Peter Watson explained. As he went on, “Lawson was concerned that the selection standards would be watered down following the handover. I’m confident that won’t occur.”

For Watson, the list of individuals to thank was simply too long to not forget someone. He did take a moment to recognize the six Commandants who have been involved with the project since its inception in 2006 as well as S170 Nathalie Filion-Poitras, whose assistance was essential and who is now an honorary member of the Class of ’63. He closed his remarks by passing on “what was quoted to me, that this wall should be as significant a piece of the landscape as the Memorial Arch.” With that, he turned things over to the younger generation. 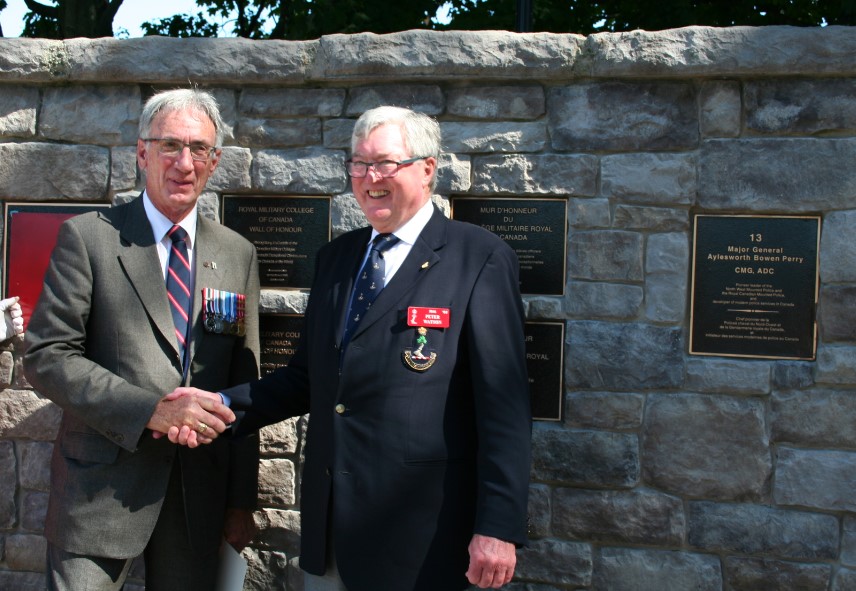 10642 Doug Wright spoke on behalf of the Class of ’75. “It’s good to be called the ‘younger’ generation for a change,” he joked. “We are pleased to accept this responsibility, and I want to thank those from the Class of ’63 who have advised and guided us these past three years. We’re ready, and we commit to honour, respect, and maintain the selections standards that have been set.” Two additional plaques were then unveiled, one in English and one in French, to commemorate the handover of responsibility for the Wall.

3528 Gen (ret’d) Paul Manson, a previous inductee, also addressed the assembled gathering. “This Wall is a truly inspired contribution to the College,” he said. “It tells of the value of our College to Canada in ways that go beyond the fundamentals.” As he explained, in taking the time to research the individuals commemorated on the Wall (Buchanan is the thirtieth inducted since its inception), he noticed two common qualities among them all. “The first is the innovation they showed and the second is the great diversity of skills and experiences they possessed. That helps to dispel the false notion that Canada’s military colleges only turn out uniformed warfighters. RMC’s real value cannot be measured in dollars and cents.”

For 5877 Ted Davies, a member of the Class of ’63 who was there at the beginning, he has mixed feelings at handing over responsibility. “In 2006, we had several ideas for our gift to the College. The Wall was received most favorably, but back then we didn’t know what it would look like or even where it would go,” he explained. “When I was on staff here, I was in Rideout Row and so I knew that Cadets came this way as they went to the gym each day. It just made sense to put it here.” The Class of ’63 has surmounted a number of obstacles to make the Wall of Honour what it is today, including going through several suppliers of the plaques themselves. The current supplier, as Davies explained, ships from Australia and “can do so cheaper than they can from Toronto.” Still, he said, “At my age it’s good to turn this over to the younger generation. It looks like it’s been here fifty years!”

The Class of 2022 Officially Enters the Wing