Since the successful summit of Mt. Aconcagua in Argentina — the tallest mountain in the Western Hemisphere — by an independent cadet-expedition group last Christmas, significant work has been put into creating the parameters by which expeditions “to the ends of the Earth” can be executed by a group of RMC cadets every year.  This vision became that much more of a reality on Wednesday September 14th, as members of the RMC Outdoors Club voted for new club bylaws, which included the name change to the RMC Expedition Club by a large majority.

The biggest adaptation coming out of this vote was the official initiation of the new structure of the club, which splits the Executive Committee’s efforts into two main groups: Leisure and Adventure Activities. 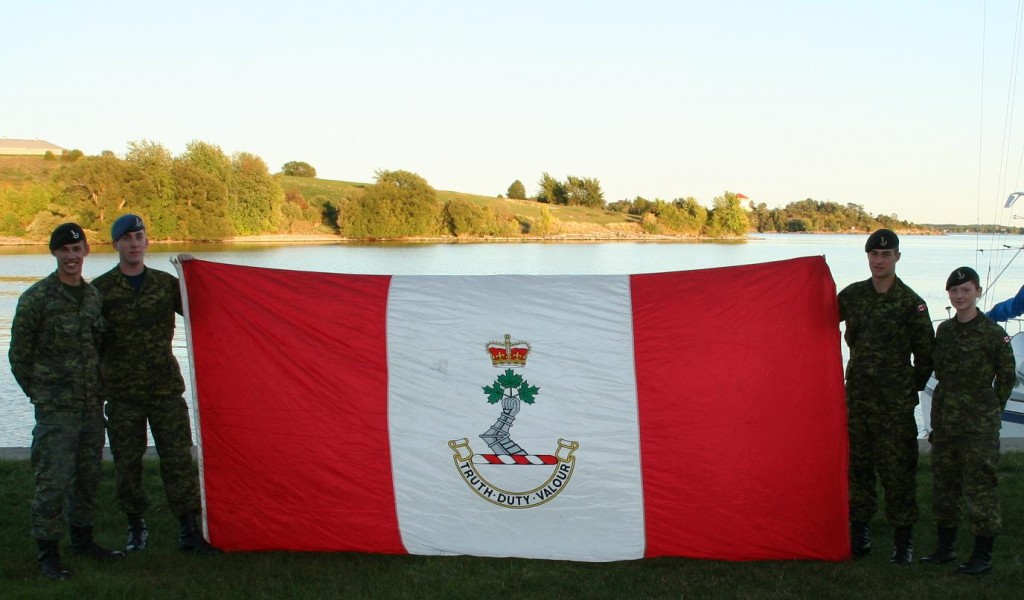 Leisure activities, to be coordinated by the VP Leisure, 25037 OCdt (III) Nicolas Métayer, involve traditional Outdoor Club staples, such as the annual ski trip and the management of the canoes and kayaks. OCdt Métayer, a logistics officer by trade, has already hit the ground running, and is engaged in a total reorganization and overhaul the club’s equipment.

Efforts made on the Adventure side, under the supervision of the VP Adventure, 25982 OCdt (II) Colin Strong, will be towards the accomplishment of the annual adventure-training expedition.

26173 OCdt (II) Emily Morgan was voted in as the club’s CEO, and is working hard to finalize the club’s budget and recruitment campaign for RECSPO in October.

All will occur under the watchful eye of new club president 25881 OCdt (III) Anthony Matlock, Expedition Leader of the 2010/11 Aconcagua Expedition last Christmas. According to OCdt Matlock, “Now that we have this new club in place, cadets craving independent or military-styled expeditions have the perfect launching pad. We can go anywhere. The sky truly is the limit.” 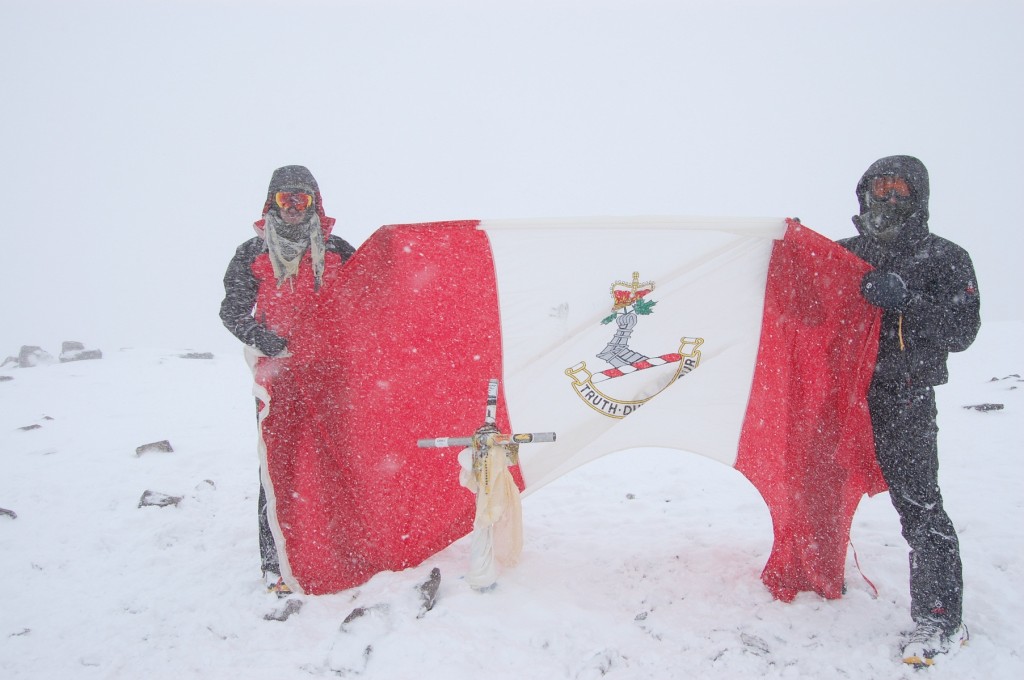 OCdts Smith and Matlock (right) at the summit of Mt. Aconcagua (6,962m)… click here for the story!

With the formalities now behind them, adventurous Expedition Club members hope to pursue the vision of, not only conducting an annual expedition to the far reaches of our planet, but also of leaving RMC’s mark in the local communities hosting these expeditions.  Currently, OCdt Matlock and a team of nine OPI positions are working hard to organize the 2011/12 Kilimanjaro Expedition, in support of the NGO, Build Africa, which facilitates the construction of schools, teacher training, HIV education and provision of learning and sports equipment.

“In a little over three months the Expedition Club will successfully climb Mt. Kilimanjaro in Tanzania,” says Matlock, “and rightfully contribute to the continent’s hope for a brighter future.”

It was a trip to be remembered to say the least. 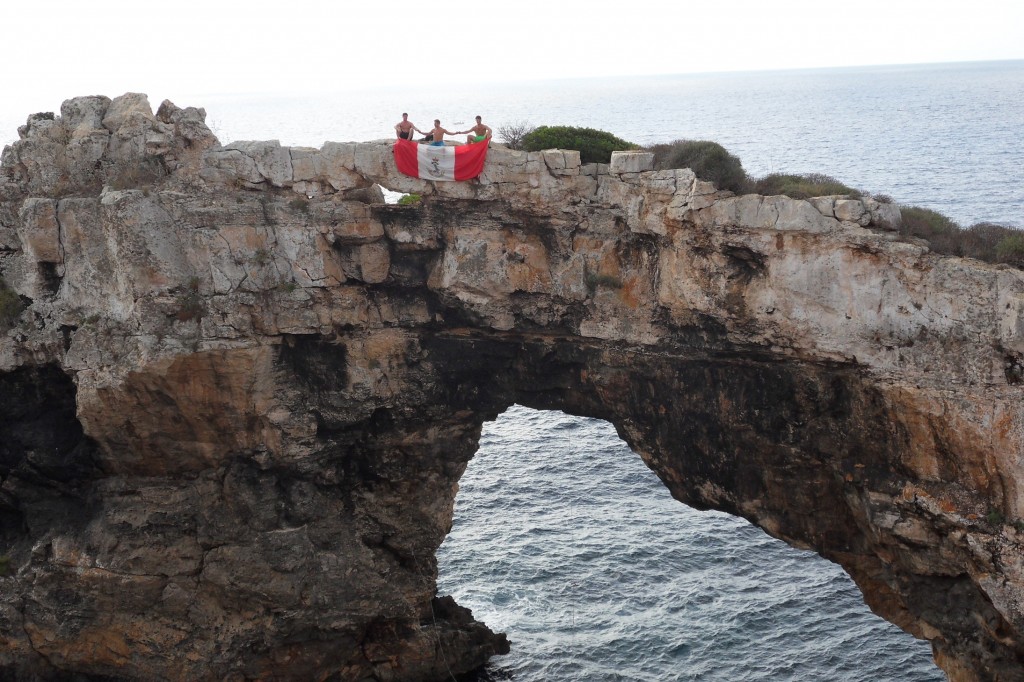 From attempting to catch the Loch Ness Monster in Inverness, Scotland, to hurling themselves off of 24m cliffs in Spain, these three adventure seekers had their adrenaline pumping for their short 2 weeks of summer leave. Travelling all the way to the island of Mallorca Spain, known as the Mecca of free climbing, 24992 OCdt (IV) Eric Robb, 25194 OCdt (IV) Alexander Kiselius and 24868 OCdt (IV) Steve Burry set out to find the legendary “Es Pontas”, to lay eyes on the monumental route climbed by profession rock climber Chris Sharma.

Backpacking around the island to “Deep Water Solo”, the sport of free climbing overhanging sea cliffs without ropes or harnesses, using only the swells below for protection from a fall, the boys became acutely aware of the challenges surrounding this elite sport. Requiring determination and focus at heights of 40 feet above the waves, the only thing keeping the boys from freefalling into the water was a light dusting of chalk on their fingertips.

Mounting the Arch toting a genuine RMC Flag, the boys proudly displayed their colors 75 feet above the water for all to see. Onlookers came to photograph the “Crazy Canadians” who would stop at nothing for a moment of glory. After much anticipation and 2.13 seconds of freefall, the boys plunged into the water below after leaping into clear space off the Arch. Es Pontas can now be scratched off the bucket list, its place to be filled by the next insurmountable challenge. 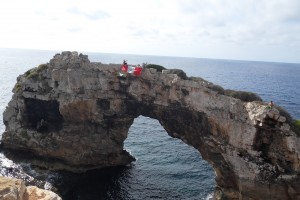 Next on the list is Mount Kilimanjaro, the highest standing peak in Africa.  These adventurous boys, along with the IC of the upcoming expedition 25881 OCdt (III) Anthony Matlock are looking for motivated young traveling cadets to pass on the flag, and fly the RMC colors proudly around the world.  So far, the flag has seen North America, South America, Europe, and soon to be Africa in the short span of one year.  Who is up to the challenge? The sky is most definitely not the limit!