It was a real shock to hear of Pete’s untimely death. He was a great friend who brought a lot of sunshine into the lives of all those who he met. I was fortunate to have seen him in early June when I met him for the last time at “lunch at the SSM” – an informal custom that evolved following our postings to RMC in the 1970s. Peter had his camera on 5 June and took several photos of some of the members of the old Admin Wing gang – Gerry Stowe wasn’t able to make it. I asked a young army officer who was present to take a photo of the five of us and he obliged. Attached is a copy of that photo and condolences for Shirley and family that I submitted to the Kingston Whig Standard in July. Unfortunately the Whig staff are having a problem adding photos and are still working on correcting their obit programming problems.

While it would be an honour for me to write Peter’s obit for Veritas, unfortunately I don’t really have much knowledge of his life and careers other than during those great busy and challenging five years at RMC between 1972 and 1977. A better choice might be Gerry Stowe (with a broader knowledge of Peter’s life and total career) or John Plant (Peter’s cadet friend and superior during most of Pete’s 14 year tenure as RMC Registrar). Perhaps the obit that Shirley and family originated for the Whig Standard and James Reid Funeral Home could be used as a basis for the Veritas article.

While I won’t be able to attend the celebration of Peter’s life at Currie hall on 19 August, my thoughts and prayers will be with you all at that time.

I was most fortunate to have had one last opportunity to meet Peter recently. That was on 5 June when myself and other members of the 70’s RMC Admin Wing staff gathered again for lunch at the SSM, an informal custom developed following our rewarding work as the RMC Admin Team during the 70’s. We all thoroughly enjoyed each others company and stories about our past exploits which seemed to grow and intensify over the years. We won’t forget our excellent leader and good friend, Peter Fortier. What a job you and your reporters are doing! Thank you for sending this our way. There are articles in this e-magazine to please every ex-cadet.

I am writing this in the hope that you may post it to advise everyone that the website of the Class of ’66 now contains a complete version of “The Log” for the year 1963 – 1964. The Log was the annual review of The Royal Roads Military College. The pages were completely re-built to make them easy to read with just about any browser without the need for any other program.

The following link wil take your readers directly to those pages.

Once again, thank you for eVeritas. 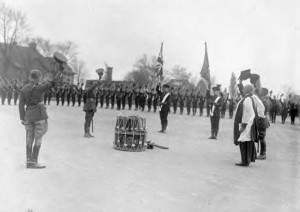 Almost 90 years ago! (Prince of Wales’ visit to Canada) [The Prince leads three cheers for His Majesty at the Royal Military College, Kingston, Ont. Oct. 25]. Click twice for better view.