The I-81 exchange (aka West Point weekend) at United States Military Academy allowed many Royal Military college of Canada cadets to meet with their future American colleagues. The weekend, which aims to bring together many sports teams / clubs in fun competition is to offer all involved a much more enriching experience. Indeed, the opportunities presented by this weekend allowed us to create ties, friends and memories that will forever remain with us.

While many of us are on the brink of graduation, this exchange allowed us to have a better understanding and appreciation of our American colleagues, whom we are certain to meet many times in our future careers.

During these past four days, we were given an overview of how their institution works.

West Point was a unique experience: going to class, walking through the historic campus, practicing with different teams, sharing a beer at their mess, and even running in order not to be late for the TAPS (curfew) all made the weekend amazing. 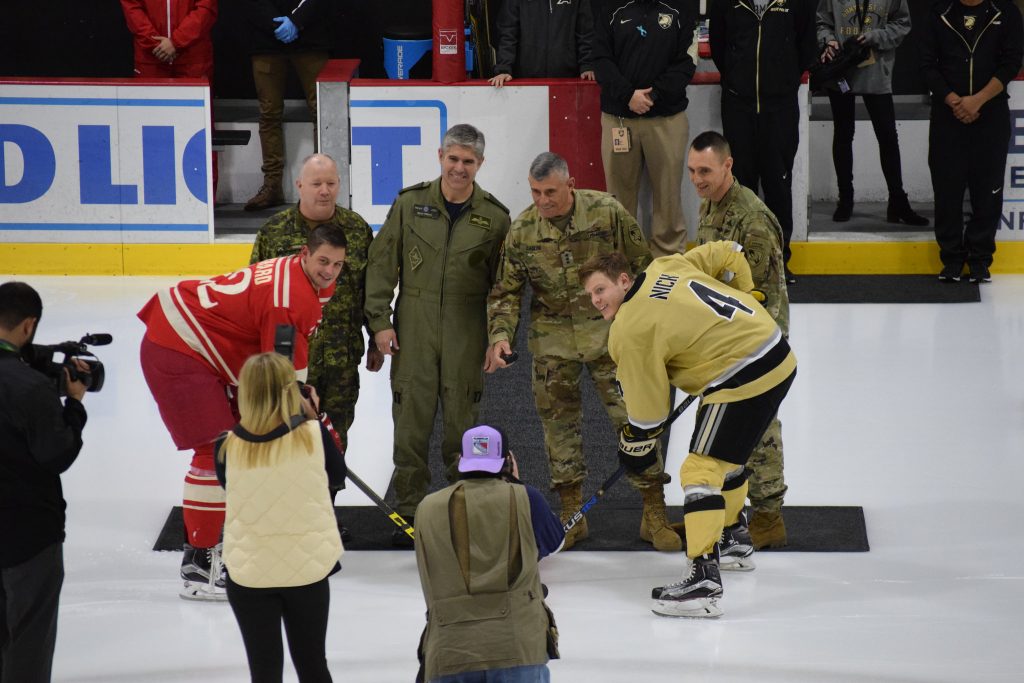 It ended with the famous hockey game of the Paladins against the Army, an event that brings everyone together and allows us all to express pride in our players and our school. Every moment we spent with our hosts allowed us to learn, share and gain understanding in their way of life and efforts to pursue a military career.

West Point differentiates itself from the RMC in several ways, but is also similar in many others. Just like RMC, West Point’s military environment allows cadets to create inseparable ties and offers the opportunity to create a cohesive force like no other.

Together, the cadets work towards their common goal: to become an officer in the Armed Forces. Whether through sports, studies, or in their military context, each person is assured of finding help from their colleagues.  The word unity here takes on its full meaning.

In short, I will treasure exceptional memories of this weekend. I and my fellow RMC officer and naval cadets created fantastic ties with the USMA cadets. This tradition is assuredly one of the best experiences offered to those of us attending RMC. 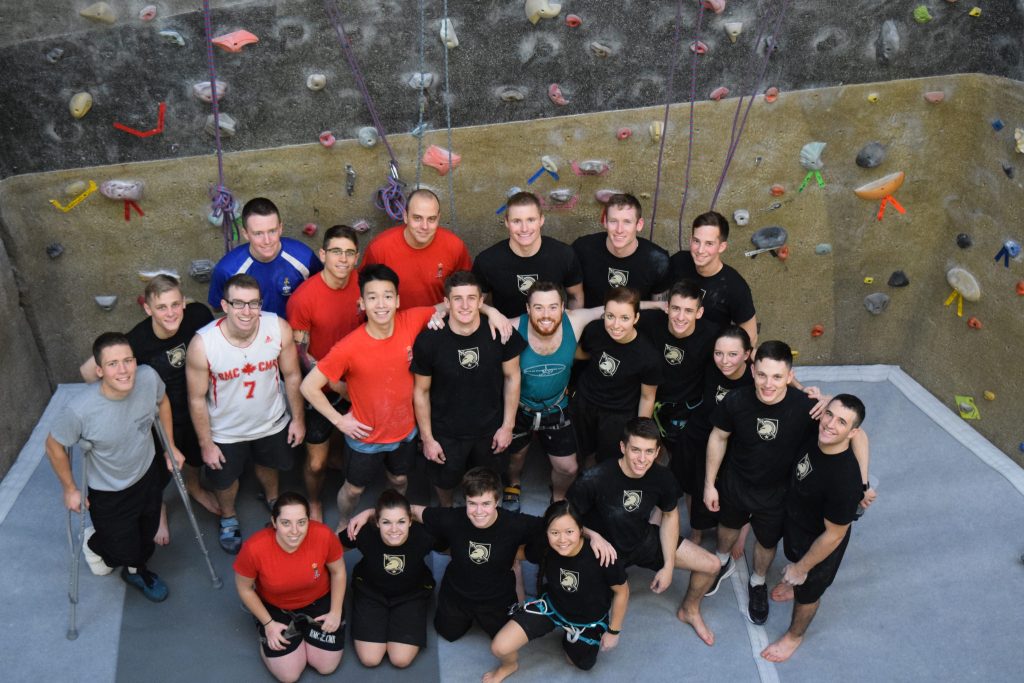 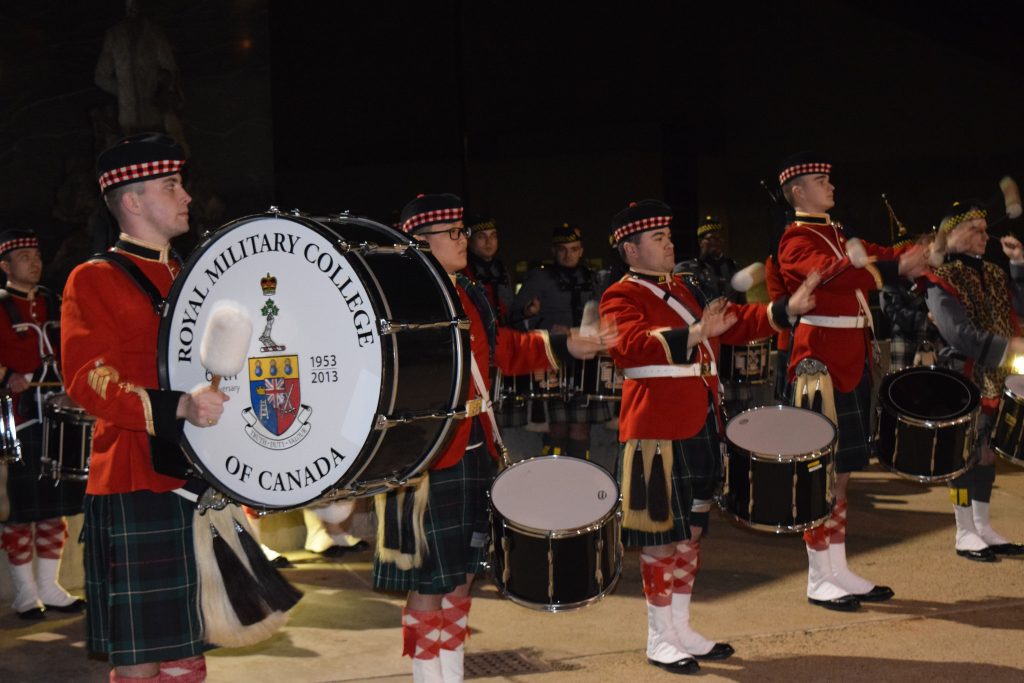 « The RMC Drum corp, accompanied by the highland dancers and pipers, travelled to the United States Military Academy this past weekend, from the 19th of January until the 22nd.

When they arrived on campus in West Point, NY, they were greeted by their hosts and taken to their rooms, but not before receiving a briefing on the rules for the weekend from the Chief of Staff of USMA.

Once they had met their hosts, the drummers went to bed. The next morning was spent either attending the classes of their host, or attending a history tour around the campus.

The school day was followed by free time for the drummers to get to know how their United States’ counterparts lived their lives at USMA. Saturday morning was filled with plenty of practice by all of the drummers: snare, tenor and bass alike.

By the afternoon, they had taken up the entire ballroom inside of Eisenhower Hall, and were practicing all of the songs that they would be playing before the 94th annual hockey game that night.

The performance went off without a hitch, with RMC playing three songs first, followed by three more by USMA, and then, in a show of alliance, we combined and played two more songs. The drummers then watched the the hockey game, and called a night soon thereafter.

On Sunday, the RMC drum corp said goodbye to USMA, and their hosts, early in the morning. The weekend went very well, with the hope for many more exchanges to come in the future! » 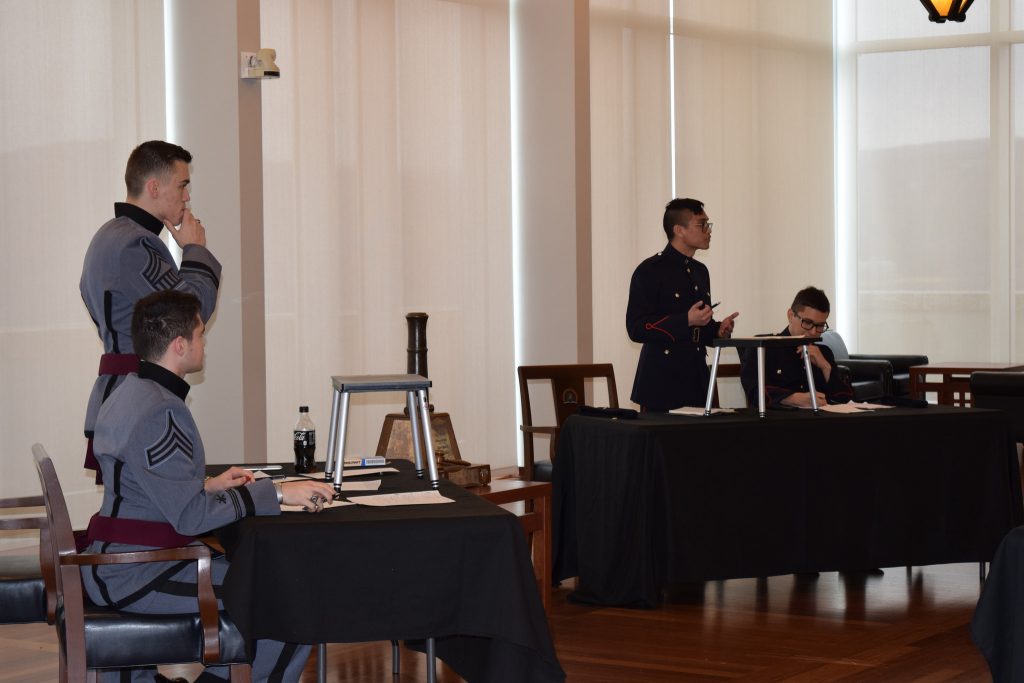 « The RMC debate team was given the honor of again participating in this year’s I-81 exchange.  Over the course of the exchange, RMC debaters lived and studied with West Point debaters, allowing our members to learn a great deal of how their American counterparts operate.

Saturday saw the two teams compete in smaller friendlier competitions before moving onto the showcase debate which dictated where the historic RMC-USMA debate trophy would reside for the next year. The topic for this year, selected by RMC Principal Kowal, asked if peacekeeping was an effective use of warfighters.

With the toss of a coin, USMA was designated as the government side with the motion that soldiers could be of better use in non-peacekeeping roles. The debaters focused on ideas such as the evolution of warfare to a more asymmetric model as well as the difficulties of nation-building as seen in Iraq and Afghanistan. While both sides made sound arguments, the judges gave the win to West Point.

Truthfully, the RMC team was, in a way, relieved after realizing they would not have to again carry the immensely heavy trophy as they did when they brought the trophy to West Point, during which the trophy occupied an entire seat on the bus. The weekend was enjoyable and the RMC team looks forward to receiving their American counterparts next year with the same kindness and generosity as they experienced over this weekend.  » 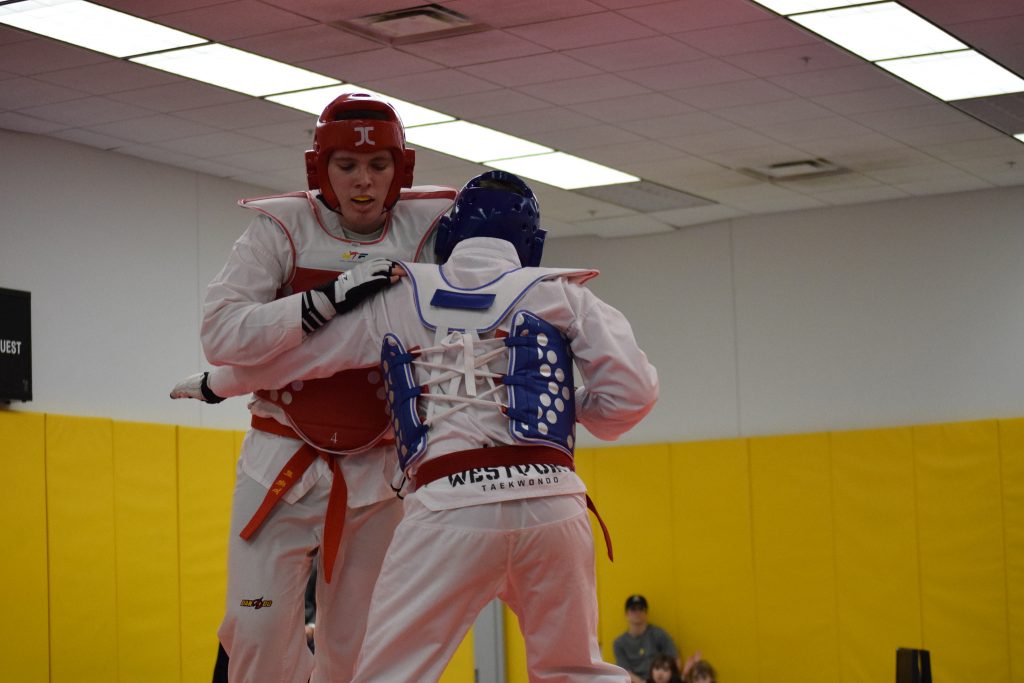 « For many of the Tae Kwon do team members, going to West Point was an enlightening experience, that challenged many of our newer members understanding of how the U.S. Army works.

Throughout the weekend we shadowed our American compatriots and learned how things worked for them, ranging from the classes they had to take or how they were tested physically.

We also had the opportunity to train with them and learn how they practice for their tournaments. As well some of us had the pleasure to part in the RMC-West Point Exchange Tae Kwon do Competition, with West Point being the victors this time round.

Our team is already training for next years competition, where we will retake our title. But we also look forward to showing are new friends around RMC next year when they come. » 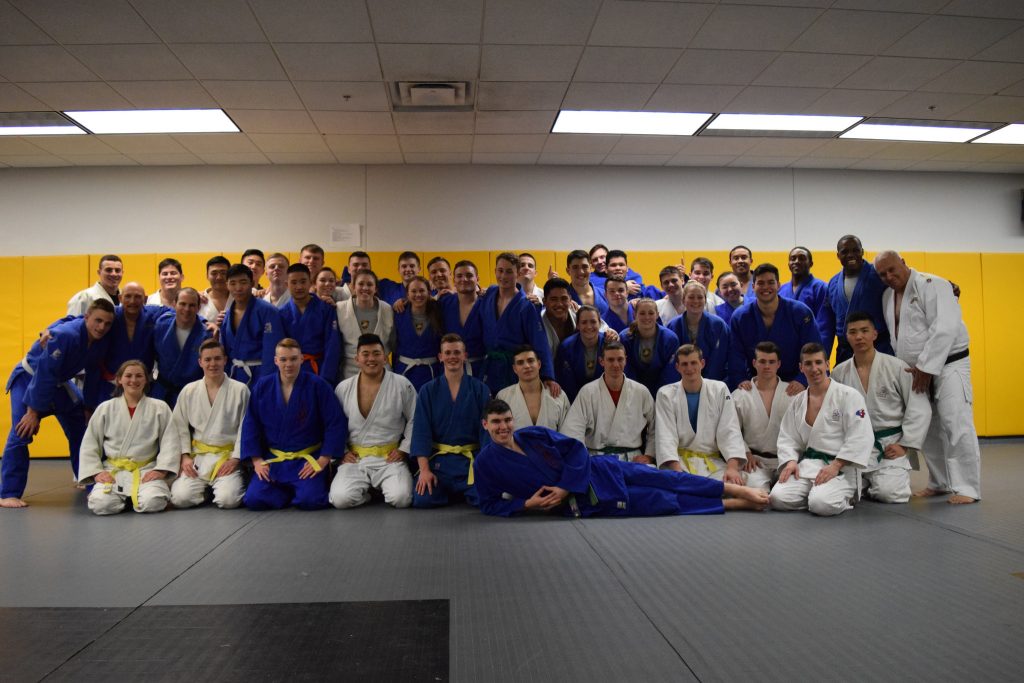 «This past weekend, the RMCC Judo team partook in the I-81 Exchange with the Army Judo team as they were hosted for an open mat Judo session and a friendly competition. The USMA club regularly competes on a nation-wide basis and is around triple the size of our team. Despite RMC’s disadvantage in terms of experience and skill, the Canadian judokas held their own against their American counterparts during the matches that consisted of one fight per person structured as in a real competition. Afterwards, we were able to share techniques and expand our fighting experience with open sparring that lasted for the remainder of the session.

The RMC team now looks forward to attending a few tournaments in the area in the near future, and meeting the Army team again in one year’s time. This weekend was an amazing stepping stone that will greatly help us perform during our upcoming competitions.

Finally, we would like to thank all the Cadets from the Army Judo team for their wonderful hospitality and for welcoming us in their dojo, it is always a great opportunity for us to test our abilities and expand our knowledge. » 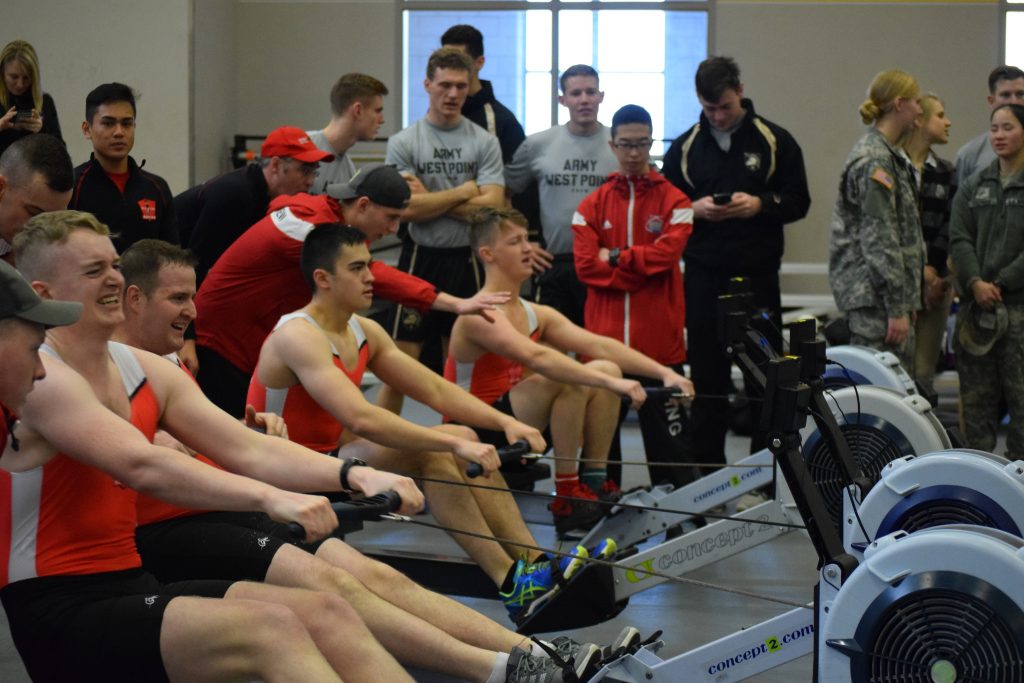 « The RMC Rowing Team travelled to West Point this weekend as a part of the annual Cadet Exchange.

After spending a few days with their hosts and getting familiarized with West Point the two Crews squared off in an indoor rowing competition. This consisted of several heats of a 2000 meter race and two heats of 1000 meters.

The rest of the team showed an amazing effort and are excited for the next time we get to meet with our friends from West Point. » 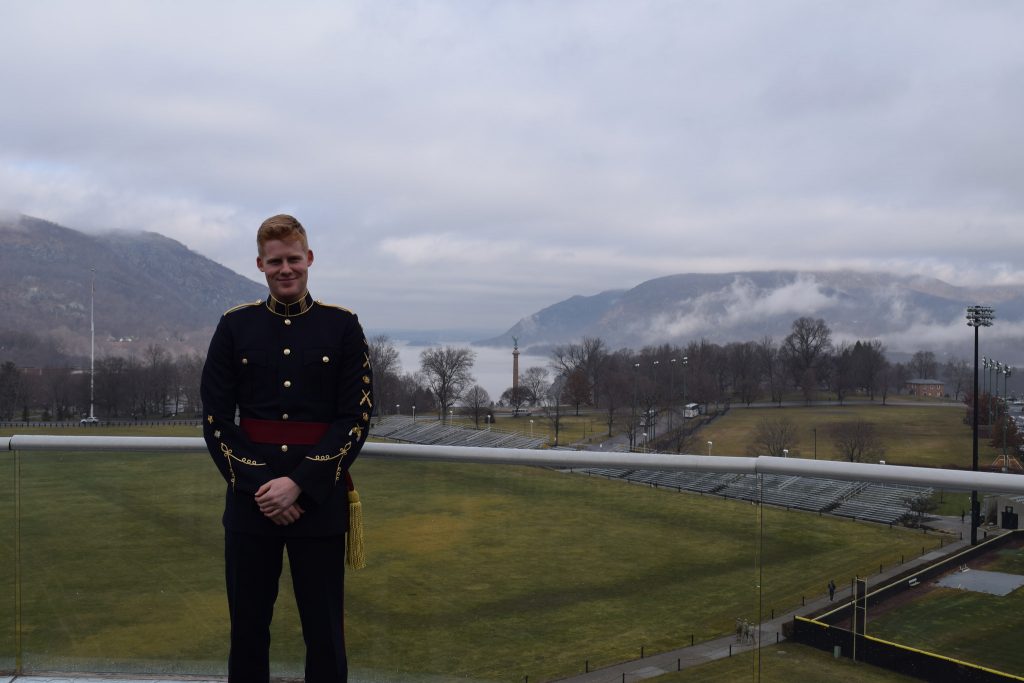 A south-of-the-border perspective on the West Point Weekend 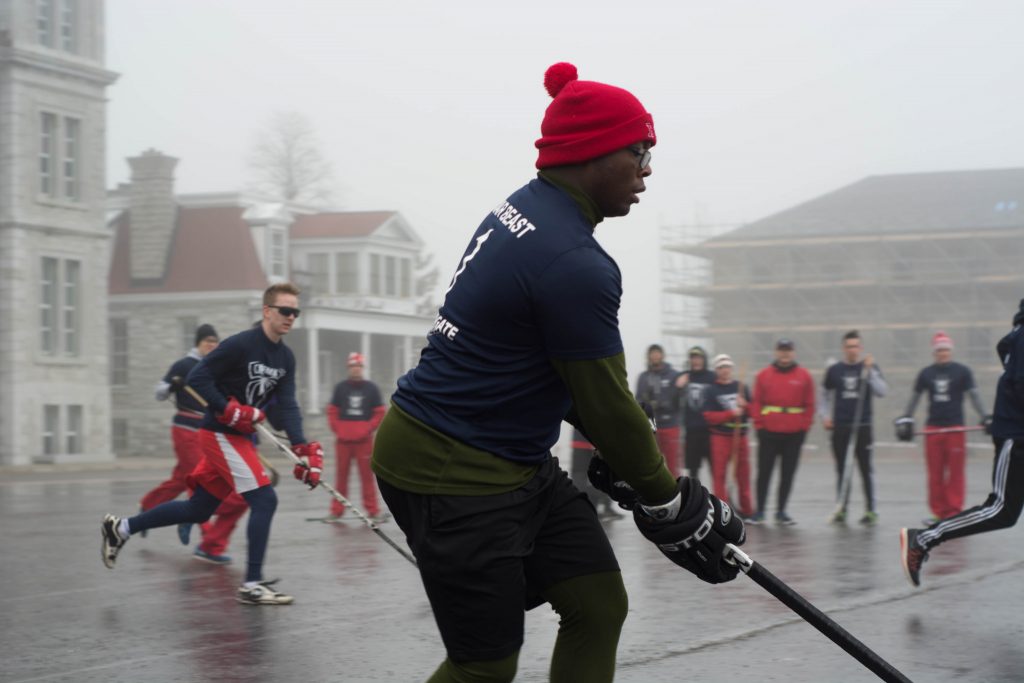 Meanwhile back on the peninsula…

On Saturday, January 21st, 2017, the student body of RMC as well as the visiting cadets from West Point Military Academy (U.S.A.) took part in an excitement-filled day of various team sport activities. With a choice of Broom Ball, Ball Hockey and Flag Football, the squadrons faced off against one another in each sport, and, aided by our American counterparts, competed for the top spot and a boost in their Commandant’s Cup standings.

As the second Sports Day of the year (the first having taken place in September), the winter Sports Day provides an excellent opportunity for cadets from the American and Canadian sides of the border to get to know each other while sipping on Tim Horton’s hot chocolate, playing fun winter games and of course listening to the drone of the fog horn of the Wolfe Island Ferry.

Brief though it may be, the West Point exchange weekend and Sports Day create lasting connections between like-minded cadets, diversify the Military College experience, and strengthen the bonds within the squadrons. As a first year member of Three Squadron, I can say with confidence that the day was a success and that I look forward to the next one!