Copper Sunday and Battle of Atlantic both occurred on Sunday, 6 May. Cadets and staff were at a number of locations on a nice weather day for a parade.

Feature Photo – An art exhibition of works produced by students, staff, faculty, and RMC’s 2018 Artist-in-Residence, Nancy Douglas opened up, May 2 and runs until 14 May. The paintings are displayed at Currie Building, Baronial Hall. 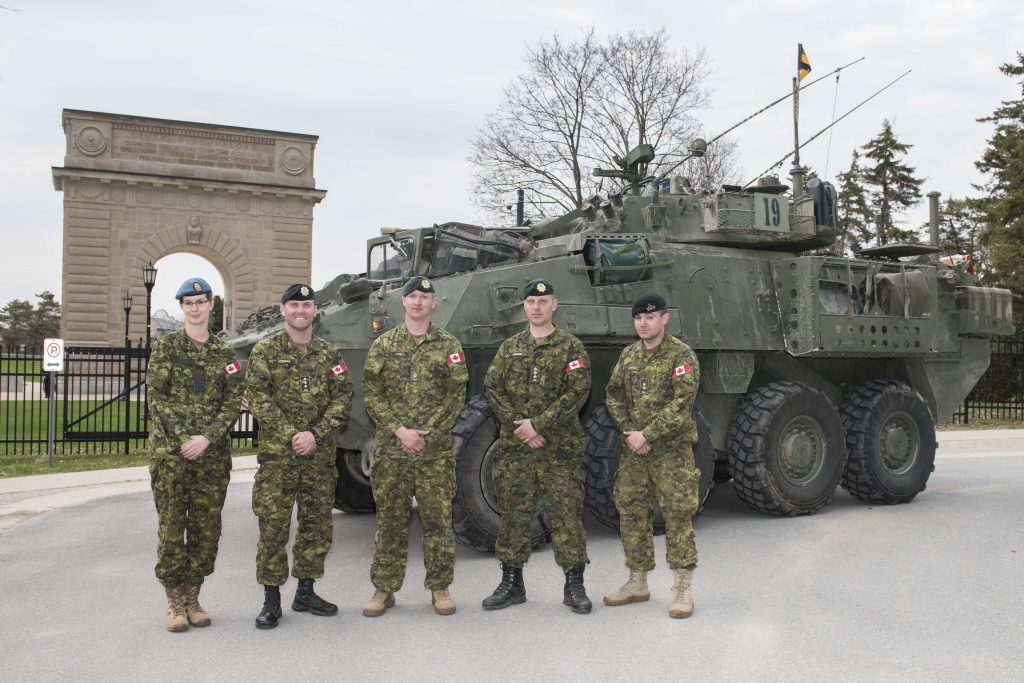 On Wednesday afternoon, more than 30 armoured and support vehicles belonging to the 1 Royal Canadian Regiment Battle Group (1 RCR BG) visited RMC. This was part of a larger, 5-day, 2300-kilometer, road move across Ontario during which the BG was conducting outreach activities in preparation for their deployment to Latvia in June.

There were more than 200 soldiers from the BG, carrying a variety of weapons and equipment. Throughout Wednesday afternoon and up until Thursday night, cadets, college staff, CFB Kingston personnel, and the broader community were invited to come and look at the equipment and talk to the soldiers.

The soldiers were more than happy to show off their equipment and took the time to discuss their capabilities in detail and answer any questions that people may have had. This included handling the various weapons, letting people try on equipment, and giving them tours inside of the LAVs.

Ex LACPLESIS PURSUIT’s visit to RMC was a welcome treat for the entire community. For the Officer-Cadets in the army, especially, it provided a glance into what life after graduation has in store.

What the Whig Standard has to say: Military exercise passes through city: Article

Another perspective from EPT last week…

Cadets prepping up for anticipated tough summer ahead

This was an interesting week for all of the Cadets at RMC. In my previous article, I discuss the different types of training that took place at the college, and I will talk about the Basic Military Officer Qualification for the Army or BMOQ A for short. Here are some of the things that happened over the week.

For starters, PT happened every morning at 6 am sharp, with the exception of Monday, and consisted of cardio training and body weight training. On Tuesday morning, the training circuit consisted of hill sprints up the side of Fort Henry which was a fun time for everyone involved. On Wednesday, there was a 5km run across the RMC campus and a portion of CFB Kingston for the cadets. On Thursday, a body weight circuit of pushups, lunges, and bicycle kicks made sure that everyone was awake for the day ahead. Finally, on Friday a fun game called ‘Tire-Flip Football’ occurred where two groups would go face to face to see if they could flip some tires over to the others’ starting point. To allow for each team time to flip the tires, one team would conduct a bodyweight exercise, for example, burpees, pushups, and air squats, and once completed they would rush over to the tire and begin flipping. Overall the PT sessions offered a wide arrange of exercise for the cadets.

For the training itself, it mostly consisted of refresher lessons on previous training and introductions into tactics and skills that will be learnt on BMOQ A. Starting on Monday, there was a weapon handling class on the C7 rifle to ensure that the cadets knew the proper handling procedures for the weapon. Alongside the handling of the rifles, there were also commands that had to be brushed up on too. After the weapons handling, there was a lesson taught in Battle Procedure. It went over all of the steps to conduct a mission and was good to see again before people went off on course. On Tuesday, the focus was placed upon the parts of a Section and how to conduct Section attacks. Since a Section of troops consists of 8 people, training was also conducted with the proper amount of people and as realistically as possible. Then after a few demos, the staff walked us through our own section attacks. Wednesday consisted of a round robin style of lessons on field-craft: how to use a map and compass, why things are seen, how to conceal yourself, and how to pack a rucksack were all covered in the lessons. Reconnaissance (or recce) patrols were also covered on Thursday since it would be a large part of the course that cadets would be tested on. It was important that cadets had a slow walk-through to establish the different steps to a recce patrol before conducting our own. This was, however, just an introduction so if the concepts were not grasped the course would solidify the idea. Finally, Friday consisted of a few videos and then an after-action report (AAR) to conclude the entire week.

Overall, the week was interesting and allowed for the conformation of knowledge, and the introduction of new ideas. The EPT is helpful in the preparation of the cadets for the next phase of training, and with any luck, passing the course too.

For many staff at RMC, each Thursday at 1000 is a time to take a few precious minutes of your own time and head over to the Senior Staff Mess (SSM) for coffee and snacks.  For some this is a time to relax, kick their feet up and enjoy the beautiful views that Lake Ontario offers while others like to talk a little “shop” while they are there.  Whatever the reason for your attendance it is generally a well-attended event at the College and from time to time the Unit Fund will organize special events during this time period.

This was the case this past Thursday, May 3rd, when the Unit Fund went mobile and set up in the Breezeway located between the Sawyer and Girouard buildings.  The purpose of this change of location was to enable as many people as possible to take a moment from their day to enjoy the successes of this past Academic year.  With exams now a distant afterthought and graduation under two weeks away this was the perfect opportunity to bring people from all areas of the College together.  A very special appearance was made by the RMC Paladin Mascot, who some believed to be the RMC Commandant…….

In the end, the event drew over 200 people and was proudly supported by your RMC Unit Fund.  The Unit Fund’s mission is to deliver quality Non Public Programs for the morale, welfare and community building of its members and their families.  The Fund is managed by a committee, chaired by the Chief of Staff, with representation from all sections of the College. The Unit Fund has a full complement of activities planned for the 2018/19 academic year which includes; ski trips, sport trips, cruises, golf tournament, and curling bonspiel to name a few.  If you would like more information about your Unit Fund please contact your Unit Fund Rep (listed below) or the PSP Coordinator, Ryan Thompson. The most up to date Unit Fund information is found on our Facebook page https://www.facebook.com/groups/RMCUnitFund/

Environmental Preparation Training - The way it is. Compiled by, 27832 OCdt PR Cardona

28568 OCdt (I) Liam Chambers: Canada and the Conflict in Mali