Australian Lieutenant-Colonel Talks Peacekeeping; Mess Dinners and Pipers; Bike-a-thon; and Concert in Scarlets: What a performance! 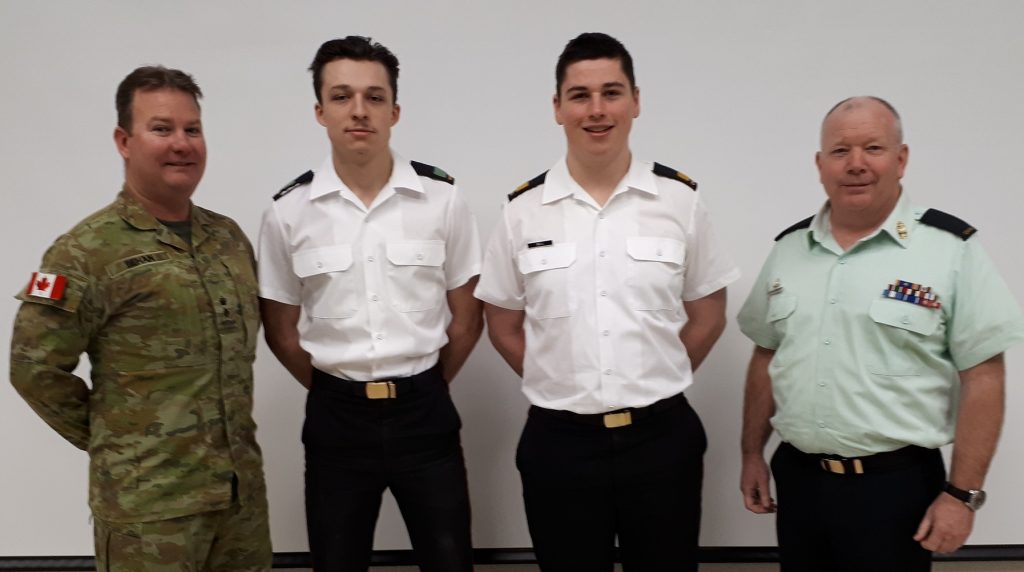 Lieutenant Colonel Behan has completed operational deployments to East Timor as a company second-in-command in 2000; to the Solomon Islands as the Operations Officer for Coalition Task Force 635 in 2006; to Iraq as an embedded Officer with the US Army 18th Airborne Corps as part of the Headquarters of the Multi-National Corps – Iraq in 2008; and, to Afghanistan as a mentor with the 205th ‘Hero’ Corps Coalition Advisory Team in 2011. From this informed perspective he presented a number of enduring lessons for leaders.

This week, Dr. Coombs’ History of Peacekeeping students had the opportunity to listen to a presentation by Lieutenant Colonel Andy Behan, the Australian liaison officer to the Canadian Army. The College Chief, CWO GArth Hoegi, was also in attendance.

Prior to this presentation, the class was studying peacekeeping operations in East Timor in the early 2000s, including the broad mandates of the various United Nations missions and how the CAF contributed to their success.

LCol Behan provided an alternative perspective, speaking to his experience as a company second-in-command of an Australian company during the International Force East Timor (INTERFET) intervention of 1999-2000. The LCol spoke to both his specific role in the mission, as well as Australia’s broader strategic goals and what the UN mandate was meant to accomplish.

He spoke to many of the unique challenges, at all levels, involved with peacekeeping operations. Some of the major takeaways were building local trust, respecting cultural differences, and the integration of women on operations.

Having been deployed to the Solomon Islands, Iraq, and Australia, in addition to the mission in East Timor, LCol Behan’s presentation conveyed his professional expertise and intimate understanding of military operations. He also took the time to engage with the audience and address any questions that the officer-cadets had. As the former Chief of Staff of Australia’s military college, he is no stranger to addressing a younger audience.

Overall, LCol Behan’s presentation was engaging and informative. Apart from learning more about UN peacekeeping, he also imparted some insight on leadership and military professionalism. 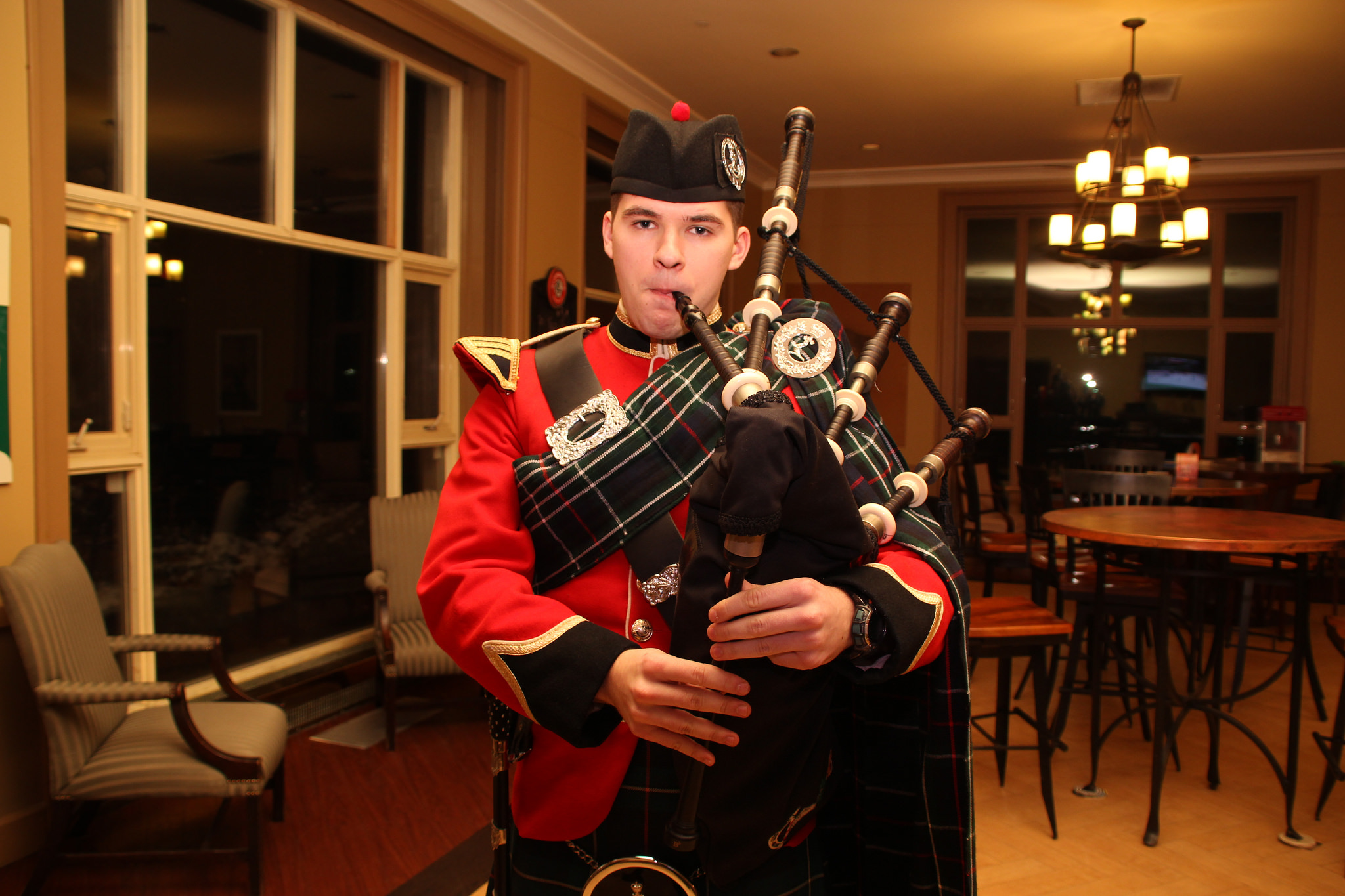 Note: OCdt Bond had the opportunity to be the ‘piper’ at the recent airforce mess dinner held at the Senior Staff Mess. He shares his first-hand experience.

Mess dinners are a large part of the military culture, steeped in tradition, and are an excellent way to meet higher ranking officers and other high ranking people. One of these traditions is the duty piper, whose job it is to play tunes for those partaking in the mess dinner. The piper alongside other traditions make mess diners a fun time for everyone involved.

We begin the mess dinners with people of sorts of ranks mixed together and talking to one another. It then becomes the duty piper’s job to play a quick tune at the 15 and 5-minute mark before the mess dinner. This is to ensure that people finish their drinks, go to the washroom, and conclude on conversations. Usually at the 5-minute mark most of the hall, with the exemption of the head table, moves into the dining area and awaits the head table. However, the Airforce goes in all together when the head table is piped in.

The next major event is the piping in of the head table. The piper must play their tune for the head table to show that the guests of honour have arrived, which in this case was Lieutenant General Hood. For the mess diner I played at, when I piped in the head table the remainder of the diners moved to their positions.

After the head table is piped in, everyone is seated and the dinner begins. The diner goes on for around an hour to an hour and a half, where appetizers, the main courses, dessert, and coffee is served. There is usually a quick speech from the guest of honour and a blessing from the padre before the dinner commences. This is the most eventful part of the night where traditions, such as taking someone’s chair if they stand up, occur.

After the dinner is concludes, there is a break where people can go to the washroom. The break also allows for the kitchen staff to clean up the tables and prepare for the toasts with port. The role of the piper in this part can vary from mess diner, but the piper can give another warning tune and even pipe in the head table again if needed.

The piper’s final role in the night is to pipe in the port. The port is used to toast to the Queen and the respective branches of the military. 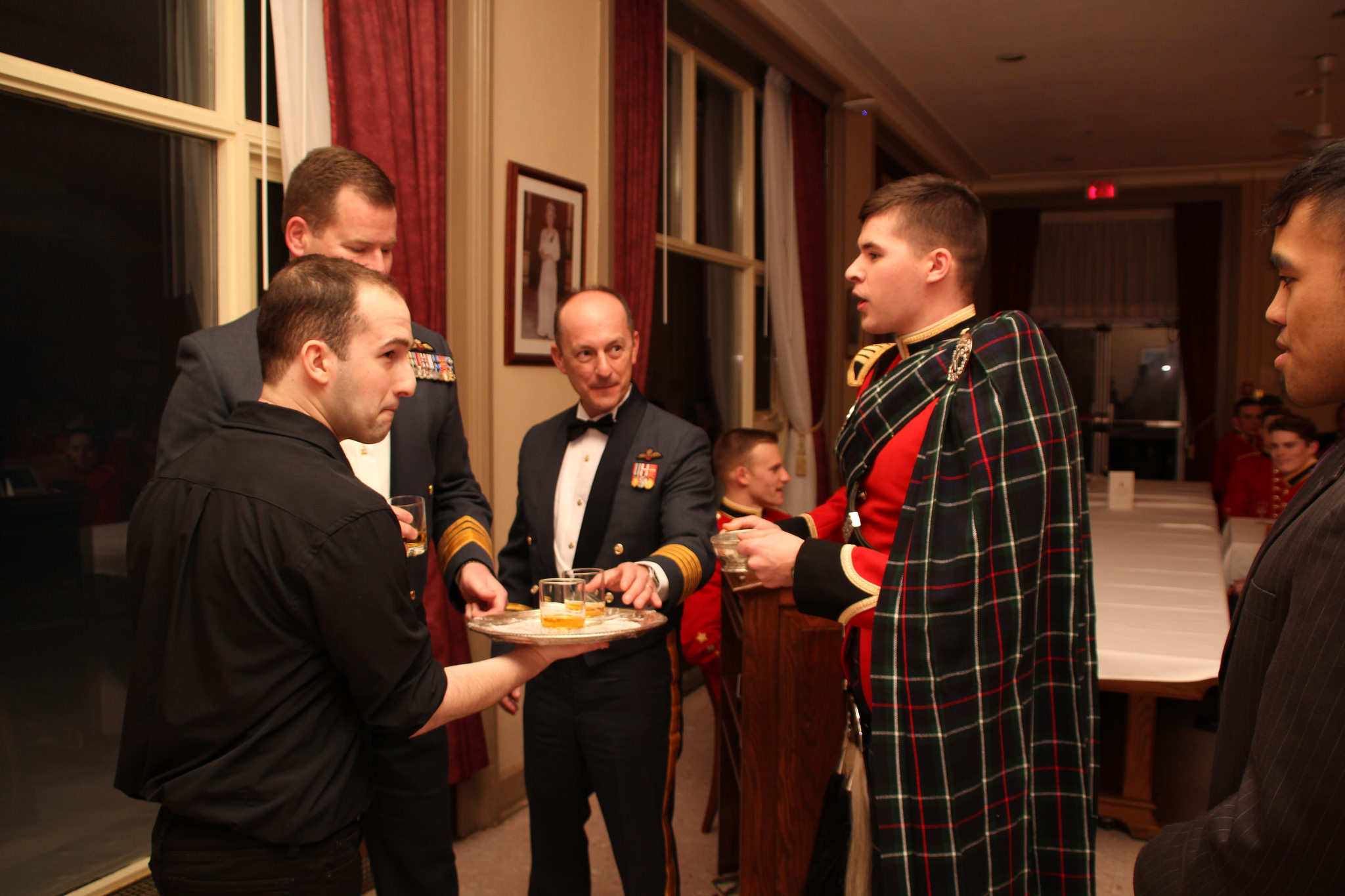 Once the toasting has concluded, some speeches are given and thanks to those who helped in the mess dinner itself. This includes the piper, the small band, and the mess staff. All three come up and toast with the guest of honour and take a shot of brandy.

Once the thanks are given and the speeches conclude, everyone is free to talk and visit the bar. Mess diners play a large role in the military: they allow younger officers to meet with older ones, and also to meet non-commissioned officer too. They are steeped in tradition and are a great social venue and are fun to play at too. 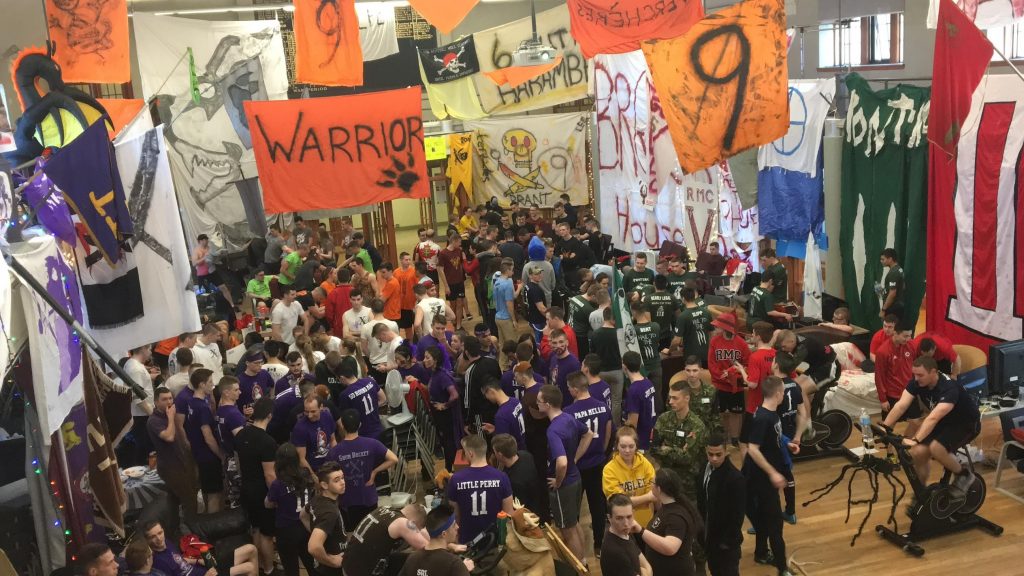 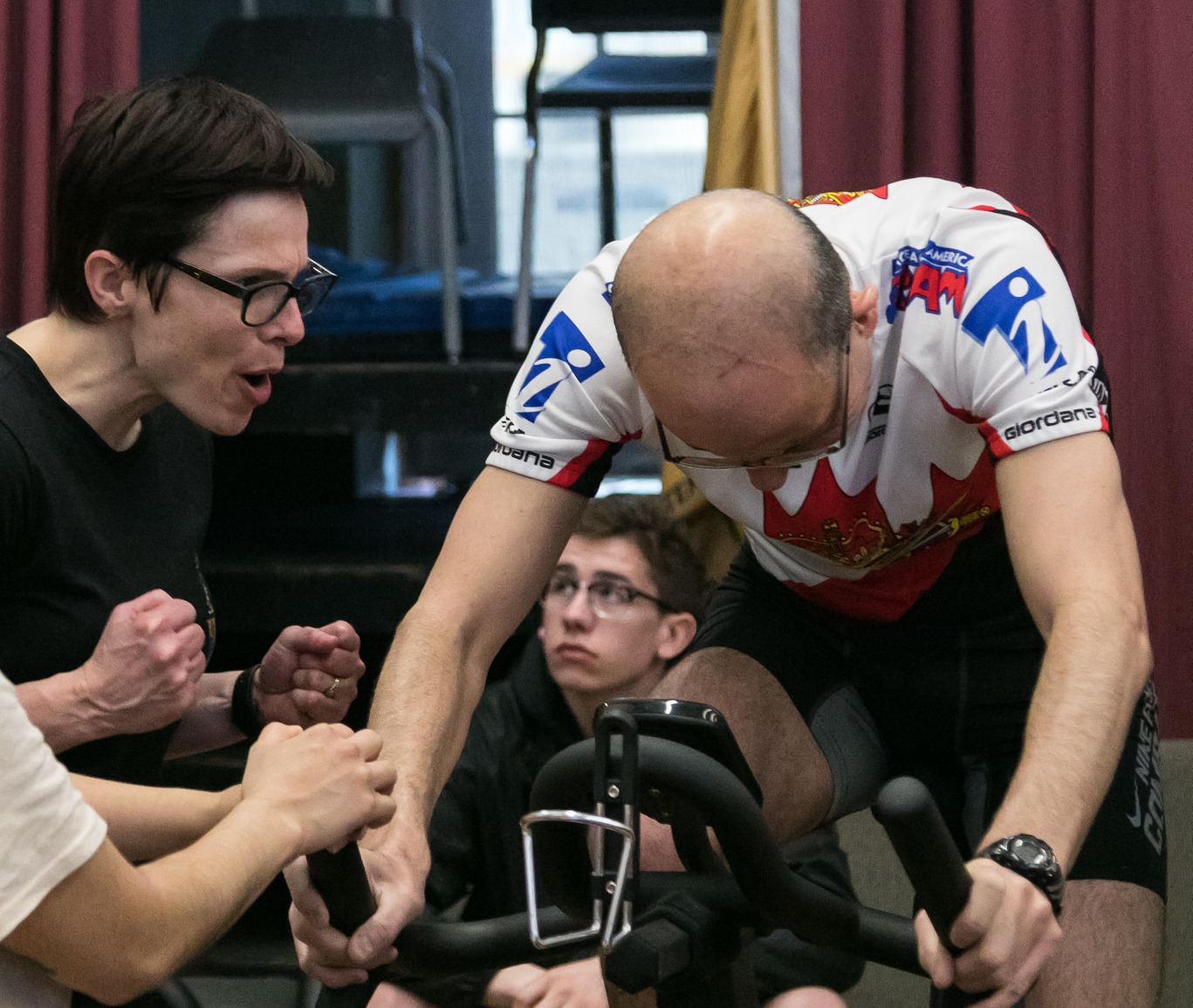 It was this past weekend on the 16th and 17th of March that the recontinued Bike-o-thon of 2018 was held at the Royal Military College. The event has been crowned a success thanks to the continuous and active participation of all the squadrons and the effort by certain members of the college: Officer Cadets A. Mercier, A. Cameron, J. Abbas and M.A. Côté as well as the cadet squadron sports officer (CSSO’s). The competition which started March 16th at 19h00, ended the next morning at 10h00 with a final sprint of five minutes where all the squadrons’ members were invited to encourage their teams. All night long, in a festive and colourful atmosphere, the participants rotated on and off the bike in order to keep a rapid pace. Furthermore, thanks to the excellent organization by the College, members had at their disposition a variety of drinks and snacks for the entirety of the competition, staying hydrated and in good shape. Some squadrons brought televisions and gaming consoles to stay awake during the long night all the while encouraging their teammates. Others ordered tonnes of pizzas, consequently contributing to Domino’s profits. One thing is for certain, the intensity of the students’ peddling was so great that surely, they could have provided electricity to Kingston for the night. All said and done, 3, 11 and 10 Squadrons won first, second and third place with 839.9 km, 831.4 km, and 815.6 km respectively. Congratulations to everyone for the effort and enthusiasm!

‘‘Seeing drive and determination in your friends’ faces and being able to do it as a team made the challenge all the more enjoyable. I am looking forward to participating again next year. ’’ Officer cadet D. Ortega

‘‘The bike-a-thon is a really special event. If you were to try and explain it to a friend you would probably wouldn’t be able to do it justice.  Whats so exciting about a bunch of stationary bikes in a room? Why would cadets be so excited to take turns riding all through the night? It’s not until you’re in that room, a rainbow of colour from each squadron and you’re surrounded by the flags and banners and cheering that you realize: this school is a special place, and our students are anything but ordinary. ’’ Naval cadet G. Omand 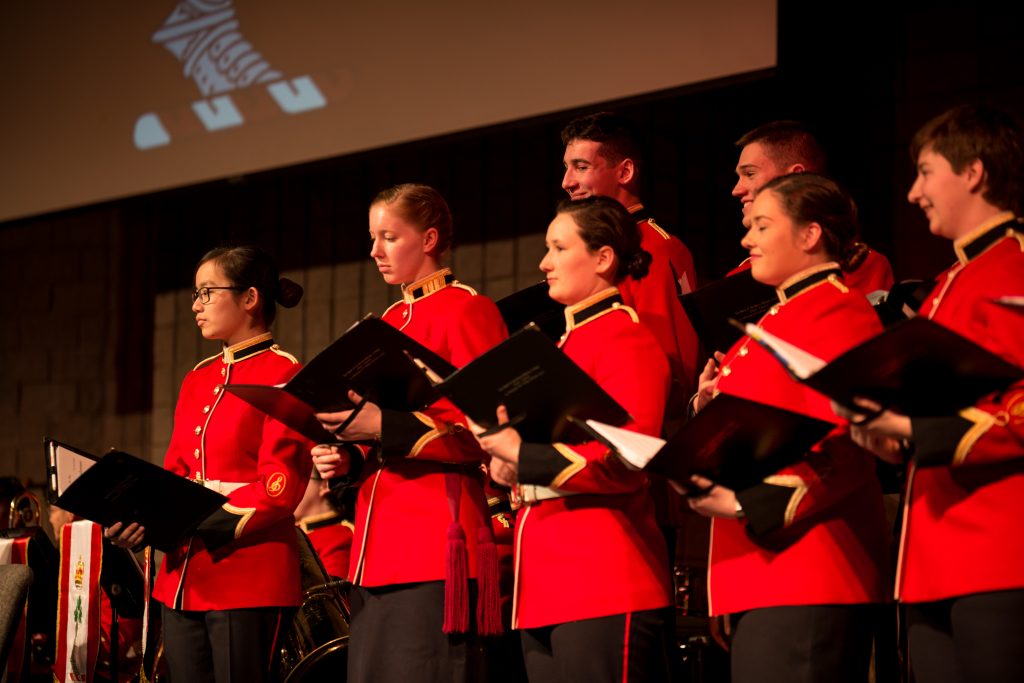 Concert in Scarlets: What a performance!

Rolande and I took the opportunity to attend the Concert in Scarlets concert this past Sat, 24 March.

We were not disappointed!

We have been attending this event for more years than we care to remember. One way I’ve always gauged, if, I enjoyed a particular concert, for hours later, I find myself humming (unconsciously) one of the renditions from the program.

This 2018 concert was, in my opinion, a big success for a number of reasons.

First and foremost – the performers: Whether it was the Choir; Dancers; Brass Ensemble; Brass and Reed; Drummers; String Quartet; or the Pipers. They all had their game faces on from start to closing; it was definitely an A-1 performance. In short, a great team effort.

Great teams are usually great because they have a great leader. Or leaders.

Anyone who was in the audience for this performance clearly recognize the skill, talent, and likely, most of all, the showmanship of Warrant Officer, Aldwin Andrew Albino the conductor.

The multi-talented Warrant Officer kept things rolling and the crowd engaged all afternoon. Among many things, he sang a song written by Paul Anka and made famous by Frank Sinatra – ‘My Way’ and dedicated it to ‘his amazing cadets’. Both Anka and Sinatra would have been impressed too.

As flamboyant and charismatic that A.A.A. is, there is another leader who obviously shuns the limelight. I’m referring, of course, to Sgt Mackenzie Landry, the Pipe Major who was doing his thing behind the scenes. The performance of the P&D group reflects greatly on his ability as a very high-end teacher.

The program itself had a great mix. A combination of familiar music and some new (for me anyways) that was pleasant to the ear. 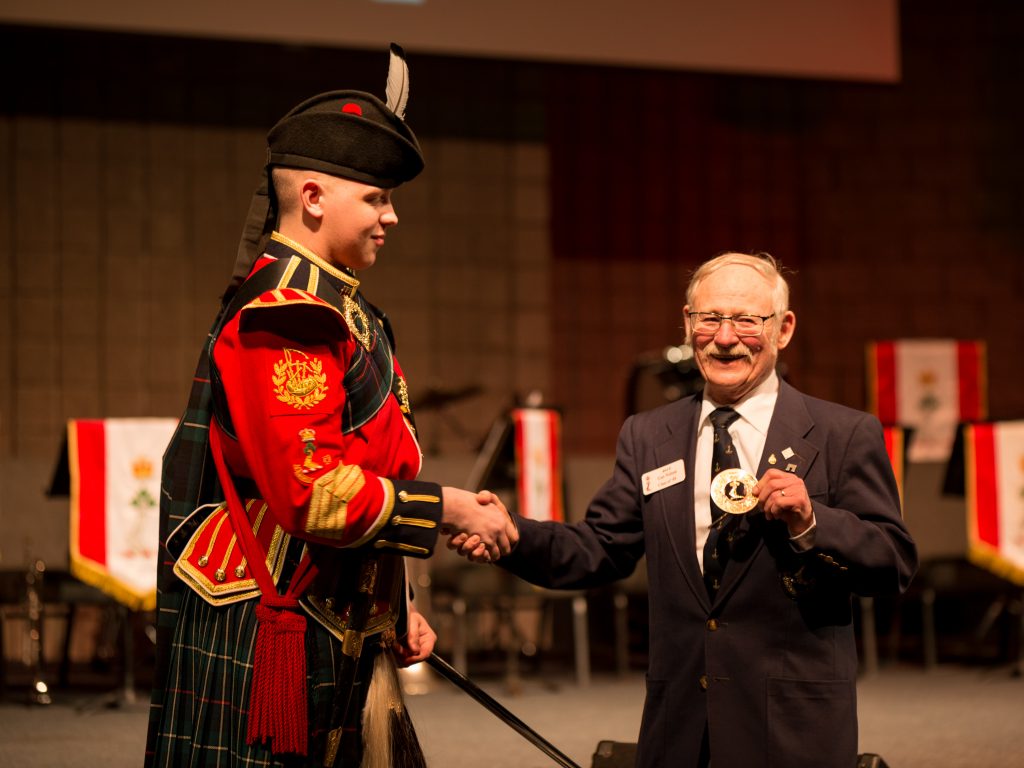 Prior to the first intermission there was a special presentation involving 4610 Gus Nelson and Pipe Major Tristan Perry. 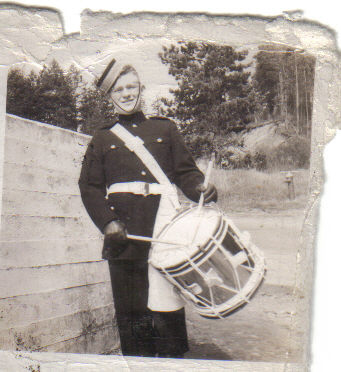 Gus, was a drummer with both the early Royal Roads Drum and Bugle Corps and the RMC Pipes & Drums band. He recently financed a tangible gift, through the Foundation in the form of customized RMC plaid brooches that the pipers and drummers were wearing for the first time for this event. A nice touch!

The first half of the concert stretched out and ran overtime.

As we had a prior commitment on the other side of town for 4:30, we left early in the second half – much to our disappointment.

We can’t close without mentioning a few points: the polished performance of the Master of Ceremony, 27268 NCdt (IV) Abbigail Cowbrough ensured the concert came off as professional. The videos and graphics were at a level one would expect from a major media network – well done, Katherine Mycko. The jobs done by Travis Blackmore on sound and Peter Archibald, the arranger were equally impressive.

Having the various cadet band leadership explain their specific roles of responsibilities by video was a nice touch and very classy and interesting.

Well done to the RMC Unit Fund who sponsored the concert which included the rental fees for the venue. The Concert in Scarlets is a first class show if you’re reading this and will be in the Kingston area this time next year – put it on your calendar to attend. You won’t be disappointed.

I just realized, I’ve been humming – ‘My Way’ while I was completing this article. 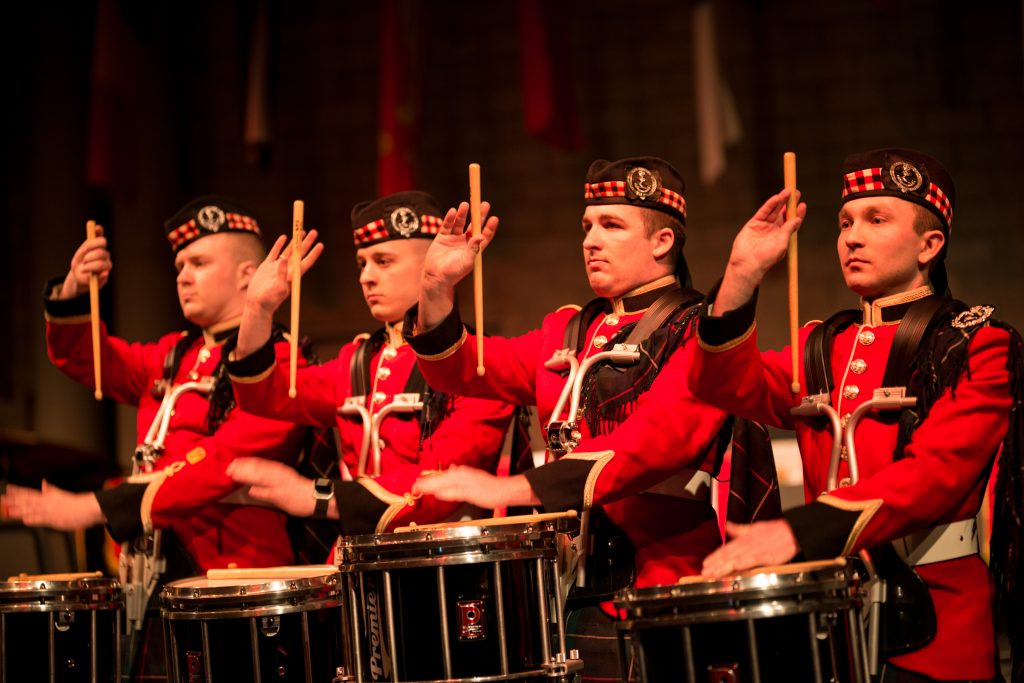 The way I saw it - 'loss of privileges' order

28568 Liam Chambers: "...current leaders and aspiring leaders should get to know about Jocko Willinkand..."