Tuesday February 24, 2009 at 1900 in Currie Hall, Dr Jane Errington will deliver the Public Lecture for the Cowan Prize in Research Excellence, entitled:

“Making Imperial Gentlemen?: Reflections on the Early Years of RMC.”

The event is sponsored by the RMC Club of Canada Foundation.

The Principal would like to invite all members of the RMC community to join Dr Errington in this celebration of her achievement.

The Commandant’s Challenge is going full speed ahead again this year.  This challenge promotes healthy competition between the Squadrons and helps foster a sense of pride amongst Officer Cadets.  Cadets are assessed on a continual basis throughout the year, but the Commandant’s Challenge measures the collective performance of Squadrons rather than individual officer cadets.  In addition to a sense of pride gained from a job well done, the winning Squadron receives the Commandant’s Cup and the honor of being Right of Line on parade for the next year. 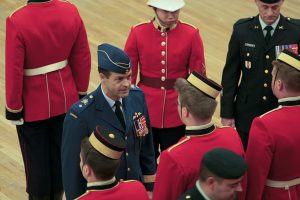 The Commandant’s Inspection, which occurred last week, was one of the most recent challenges.  Cadets’ rooms and dress are evaluated by the Commandant and his staff.  Based on the performance of the entire Squadron, a score is given and thus a Squadron can be proclaimed the “victor”.  The Stone Frigate (1 Squadron) came in first, leading the pack with a slim 15 point margin on 5 squadron.

The overall ranking so far places 2 Squadron in the lead with a comfortable 65 point advantage over 5 Squadron.  We are still awaiting the results of the Winter Sports Day which occurred during West Point Weekend, and with so many events remaining, it is too early to call. 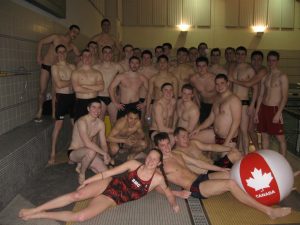 This year the 78th annual exchange between The United States Military Academy and RMC took place at WestPoint, NY. Now, as in the past few years, there was no Hockey game; however, a new sport found its way onto the events list for the weekend as RMC’s Water polo club received an invitation to play the West Point collegiate team. When we arrived on Thursday evening we met with their team. They began asking a flurry of questions as many rumours were in circulation about our team. The main question on their minds was, “is it true you played Navy and won?” Apparently they doubled their practices for the previous two weeks as they feared we were good enough to beat Annapolis’ NCAA water polo team. This made us laugh a little as, due to lack of pool time and funding, we can only practice for an hour every week.

The first evening was relatively uneventful, especially for those of us being hosted by their first years. The next morning, though, was the typical exciting Friday of West Point weekend as we followed the USMA cadets around to their classes and saw what their life was like. In the evening, the traditional dinner took place with RMC cadets and staff eating, talking and exchanging gifts with their hosts. For those of us playing water polo though, the question still remained: would our size and strength beat their speed and experience? During the warm-up the next day, we determined that those of us from RMC were generally taller and heavier, but our ability to over power might not be enough as they had speed, ample practice in proper water polo facilities, and designated coaching staff. This did not phase our will and determination though as our coach, club president, and goalie 24274 IV Ryan Bartek ordered us into the water. At 13h00 the game began as we swam full tilt towards one another. USMA scored the first goal and then scored several more, but we managed to hold our own considering our limited experience and scored a goal shortly thereafter. Our strength served us well though and despite their speed we had the stamina to last the game.

The final score was 13 – 3 for USMA, though, considering the one hour of pool time our club is allowed each week, we fared admirably. Even the West Point coaches were impressed, and one even asked if we would be interested in joining the New York collegiate league their team plays in, as there is space for another team. This was high praise to us, since we are just amateurs who pay our club fee out of a desire to simply go and play the sport. The offer was generous, but funding and lack of varsity status might prevent such a league membership from happening. After some pictures and joking around with their team, we showered, changed and went to the closing ceremonies of the weekend where each member of both teams was given a commemorative coin for the occasion, and was congratulated on our efforts by both Brigadier-General Lawson and Brigadier-General Linnington. We all learned a lot and enjoyed the weekend thoroughly, and despite the loss, we look forward to our upcoming practices and games where we will train and continue to improve ourselves to be examples of why RMC is the best. The ladies wrapped up a successful rugby season with a match against the Queens Golden Gaels in early November. Despite the cold, rain, and fog the girls put up a tough fight playing a fiercely competitive game, dominating in aggressive attitude, energy, enthusiasm, and perseverance. Playing a widely defensive match, the ladies took advantage of Queens’ size with their remarkable speed, and athleticism. The teams’ overall improvements in technical abilities and game knowledge have been tremendous in comparison to their first match played back in September, where for many of the players it was their first time ever touching a rugby ball. Despite their tremendous efforts and stupendous improvements the ladies lost 0-25 with Women of the Match awarded to (IV) Eve Boyce. Overall the ladies finished up their first fall season strong with a record of 3-2.

Way to go ladies, keep up the hard work!

While the RMC Women’s Rugby Club is now “out of season”, they will not be inactive during the Winter 2009 semester.  Team leaders are currently organizing other matches during the coming semester and intend to continue practicing in order to further develop their skills and grow into their own as a successful rugby team.

The team is supported by a team of dedicated and hard working staff with Captain John Proctor and M0919 NCdt Chris McLeod (RMC 2008) acting as coaches and 22428 Captain Kristin Topping (RMC 2002) as supervisor.

An RMC project initiated by the DAth and his staff will replace the Constantine parking lot by an artificial grass surface on which varsity and IMs athletes will be able to train and compete. This project, under the supervision of College Engineering Officer Major Lehoux, is estimated to cost between 1 and 5 million dollars. In order to allow student parking, plans to construct a new parking lot are underway.

Most students at RMC have experienced the joy of spending at least one hour in the cold November temperature, playing outdoor soccer or ultimate Frisbee for IMs. Soccer and rugby varsity athletes on the other hand, are lucky enough to spend almost two hours out there every night, training for the next season game. When the winter season comes, the IMs move to the indoor of the field house, where they play sports such as ball hockey and dodge ball. As for the varsity athletes, they attempt to train for their sport in the same field house. Although they try to make this training as realistic as possible, it just isn’t the same as training on an actual grass surface.

In order to allow our varsity athletes to train more effectively, steps have been taken to replace what is now the Constantine parking lot by an artificial grass surface to be used for soccer and rugby varsity teams and IMs. This training surface would be covered by a dome in the winter to allow training despite the cold and snow. The design concept should be very similar to what has been built in Ottawa at Lansdowne. Although this surface will be primarily used by varsity athletes, it will also be available for use with IMs, the base, as well as the city.

To get a project of this magnitude approved by Ottawa, there are three steps. First, the organisation submitting the project must prove that there is an actual need for the facility; this is called the identification. After the project is identified as a need, there must be a preliminary project approval, which means that a development study must be made (where will the facility be constructed, how much will it cost etc.). Finally, the design and cost of the project must be approved.

Currently, the project is now at the identification stage. With the process involved in constructing this surface, this means that we should have an operational dome around 2010 or 2011. With the disappearance of the old student parking lot, it is obvious that a new location must be assigned for that purpose. The new parking lot would be situated east of the current one, and will be as big, if not bigger than it is at this moment.