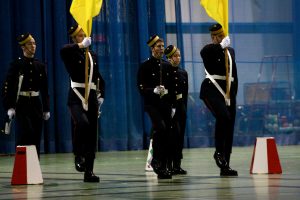 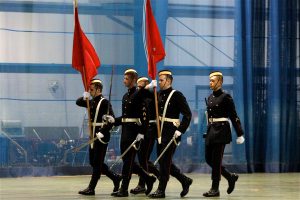 3rd Year Cadets from all Squadrons competed fiercely last week for the honour of bearing the RMC Colours during the 2009 Graduation ceremonies.  The Colour Party Competition is an annual event involving 3rd Year cadets from all Squadrons.  Early in the new year, cadets begin practicing for the competition both during designated training periods and on their own time.  Under the guidance of the RMC Drill Staff and senior NCOs the cadets must learn all aspects of military exercise relating to the bearing and treatment of the Colours.  The winners of the competition must be flawless in their execution: the Colours are sacred and an important part of the rich RMC heritage.  The months of preparation culminated last week as cadets competed under the very critical eyes of CWO Chiasson, MWO Léveillé, and WO Charlebois, all senior NCOs at the College.  In the end, 2 Squadron (Lasalle) came out victorious and will have the honour of bearing the Colours come Grad Parade.  Honourable mentions go out to 5,4, and 6 Squadrons who came out in 2nd, 3rd, and 4th place respectively. 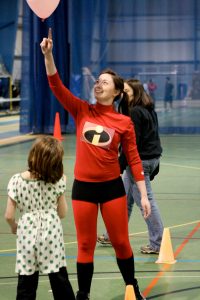 1st Year cadets recently completed their annual class project which consisted of a day of fun and games organized for local children.  Activities spanned the day and included anything from face painting to races and just plain old fun for both cadets and kids.  The event also has a more serious underlying raison d’être: officer cadets have to be able to integrate and interact with their communities.  Part of this invariably involves being able to interact with kids.  All in all the children had a lot of fun and even the most hardened cadets admit it felt good to go back to “recess” for a day.

The Sandhurst Team departed RMC for West Point last Thursday and have an intense week of training ahead of them before the actual competition next weekend. This year’s competition will be held on Saturday, 18 April 2009 and is open to spectators. On Friday 17 April 2009 Sandhurst squads will conduct the marksmanship portion; this will be closed to spectators.

The Sandhurst Military Skills Competition has run in various configurations since 1967. This year, it is a two-day event conducted at the United States Military Academy West Point.  Teams are required to perform a series of challenging military tasks during a rapid, non-tactical move along a partly-prescribed 7 mile route. The winning team will be determined by the total time required to negotiate the course. The teams’ total time will be a combination of the time taken to complete the course from start to finish as well as any time penalties incurred throughout the course and on the marksmanship portion.