Leknois will be a member of this coaching staff from May 9th to June 20th. The purpose of the senior men’s national team program is to identify, select and train a group of players who have the potential and have demonstrated the necessary skill and experience to represent Canada on the international stage.

Last year’s senior national team qualified for the Fédération Internationale de Volleyball (FIVB) World Championships, which is being held this year in Italy. This year’s selected group of players will train at the Team Canada Volleyball Centre, located in Gatineau, QC.

“We are very pleased to have Steve named as an assistant coach with the men’s national team,” said Darren Cates, RMC Director of Athletics. “It is a tremendous professional development opportunity for Steve, and also brings great recognition to our volleyball program at RMC”.

Leknois is well known and highly respected in the volleyball community. He has been the head coach of the RMC men’s volleyball team since 2002. We wish him well and know he will do us proud! 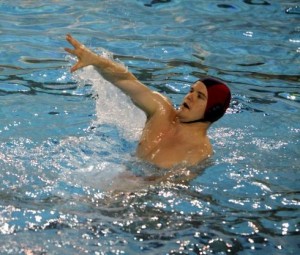 On the weekend of April 9-11, while most of RMC’s eyes were set south of the border, supporting the Sandhurst team, the RMC water polo club had its eyes set on Toronto and competed in its first inter-club tournament at the University of Toronto Athletic Centre. Polopalooza is an annual event organized by the Toronto Waterpolo Club “Triggerfish”. Although not all members of the club were able to make the trip to Toronto, 9 brave RMC Officer Cadets, accompanied by club members Jonathan Sargent and Arno Vanalast, took highway 401 west and ventured into the unknown. Outside of weekly practices and intramurals, the RMC water polo club’s skill had never been truly tested in a competitive stage except for the match against USMA in Februarty, this tournament proved to be the testing ground our club needed to rank itself amongst other clubs.

On Saturday the RMC water polo club had the daunting task of playing 4 games in a single day. As we arrived to the venue, we came to the realizations that the pool was immense and that the other water polo teams had a great deal of experience in competitive tournament play. To our surprise, the RMC water polo team held its own against the other clubs that participated in the tournament; we were able to win our first 2, and had a very close loss against a largely superior team, despite suffering from an ongoing knee injury to one of the club’s best players, a sudden elbow injury to our team captain and goalie, a shoulder injury to coach/player Arno and enduring the levels of exhaustion felt by all members of the club after playing 4 full games in one day. At the end of the day, the team placed 3rd in its division and 6th overall. The club plans to return to the next edition of Polopalooza with the hope of attaining a better result. For next season, the RMC water polo club is looking forward to practicing twice a week, participating in more tournaments, and dominating against the Triggerfish in next year’s Polopalooza.