Summer on the peninsula

The Royal Military College of Canada (RMC) is full of cadets throughout the academic year. With roughly 1000 students attending the college the campus is always filled with bright young faces of cadets wandering the halls and campus grounds. However, many of these cadets leave to go on a plethora of trainings over the summer, such as Basic Military Officer Qualification (BMOQ), MARS II or Primary Flight Training (PFT).  Therefore, what happens to the campus during the summer?

One might think that it empties out completely; the halls of the shacks waiting for the cadets to return. This is not the case. There are still many cadets attending RMC over the summer for various reasons.

Currently, there are about 200 cadets still in Kingston, some are participating in SLT (French) classes while others are doing OJEs (On the Job Experiences). There are about 160 cadets in SLT classes.

A vital part of attending RMC, and one of the 4 pillars that distinguishes an ROTP officer from RMC versus another university is the focus on second language training. These cadets are working every day in the Second Language department at the college to achieve their bilingual profile.

The remaining cadets stay at the college and are slotted for an OJE, for example one cadet is working at CADTC (Canadian Army Doctrine Training Centre), deepening their knowledge of the CAF, how it is structured and operates. Another cadet is shadowing a platoon commander at CFJSR (Canadian Forces Joint Signals Regiment), a position they will most certainly be required to do in the future.

In addition, in just a few weeks Sea Cadets will come to the college for their own summer training. Overall, RMC remains a lively campus during the summer, filled with cadets, both from RMC and from the Sea Cadets.

During the summer months RMC is a lovely place to visit as it is right on the water. You could say it is a privilege to stay on the peninsula during these beautiful months.

Dates for Reunion Weekends at RMC

Effective this Fall (and following on in perpetuity), the Commandant has directed a shortened First Year Orientation Period (FYOP) starting on the Saturday one week before the Labour Day weekend. It would be limited to three weeks in duration, and it would culminate with Reunion Weekend (RWE) on the second weekend after Labour Day. 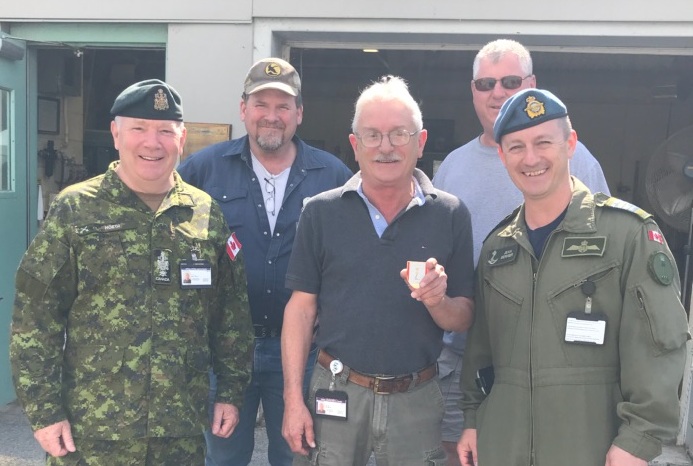 Pat Carr retired on 1 June 2018 after serving 35 years at RMC working in the Boathouse as a Carpenter and the Workshop Supervisor. Pat began his career as a carpenter in what was still the actual boat house in June of 1983.  Pat was instrumental in the design changes and establishment of the  Boat house in 1989 as it was transformed into what we know it to be today, the boy’s woodshop.  During a work force reduction in 1996 Pat was left as the only carpenter in the shop. For the following 5 years Pat worked tirelessly on projects around the college in order to maintain and support many of the magnificent wood heritage that we see on a daily basis roaming the hallways. In 2001, Pat received some welcomed company within the shop and shortly after, he became the boss of the shop. The crew at the Boathouse, with Pat at the helm, have repaired and maintained the old wooden doors, locks, custom display cases, desks, chairs, furniture and so much more; it must be noted that most frames and honor boards around the college have been built or maintained by Pat himself.

Pat will be sorely missed around these grounds however, his work and spirt will line the halls of these outstanding buildings for a long time to come.  Pat plans on staying in the area after his retirement and will continue his passion within his trade.  By no means, will Pat be bored as he has already ran out of business cards and his calendar is booked with jobs for the summer.

We wish Pat all the best in the next phase of his life! 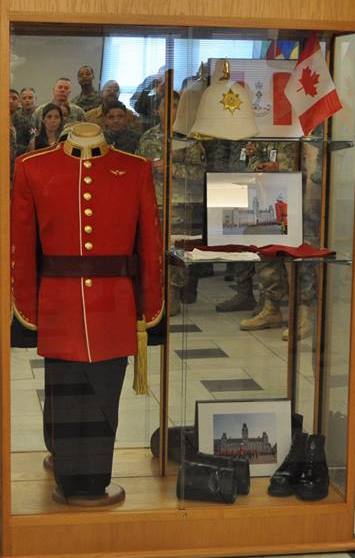 CWO Rob Keating, Training Wing Chief Warrant Officer sent us an interesting article from south-of-the-border with a different twist with a college connection. 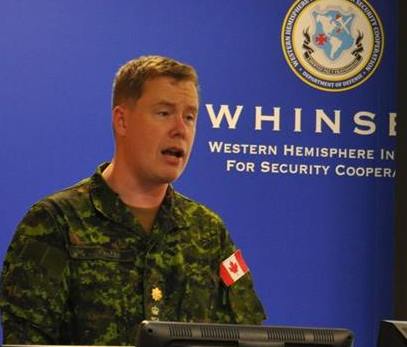 “I was asked by my former Battery Commander (Maj Brendan Insley) if it was possible to have a set of scarlets sent to him a long time ago. Sgt Chad Tupper and WO Tom Millar were the two people who made this happen!”

Western Hemisphere Institute for Security Cooperation (WHINSEC) at Ft Benning. Canada provides a permanent instructor and sends students to some of the training conducted here, including its premier course, a serial of the U.S. Command & General Staff course that is delivered in the Spanish language.

This organization provides professional education and training to eligible personnel of nations of the Western hemisphere within the context of the democratic principles set forth in the Charter of the Organization of American States while fostering mutual knowledge, transparency, confidence, and cooperation. It promotes democratic values, respect for human rights, and has provided training for more than 60,000 US and international students from 36 countries since its original establishment in 1946. 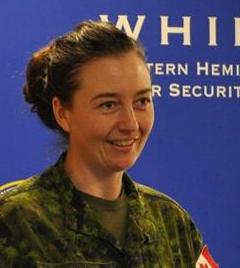 The school has several initiatives intended to achieve its goal of fostering Freedom, Peace, and Fraternity throughout the Americas; one practical example of which is the display of the uniforms of troop contributing nations. Unfortunately, the only nation which was unrepresented in this fashion until now, was Canada.

CWO Keating summed everything up nicely.

“Major Jaime Phillips (RMC graduate) and Maj Brendan Insley (both Artillery Officers), the outgoing and incoming instructors from Canada, celebrated Canada Day a bit early this year (May)while they were both still in Ft. Benning. In addition to the history lesson and a bit of Canadian humor, they added the RMC Cadet uniform display to the gallery.” 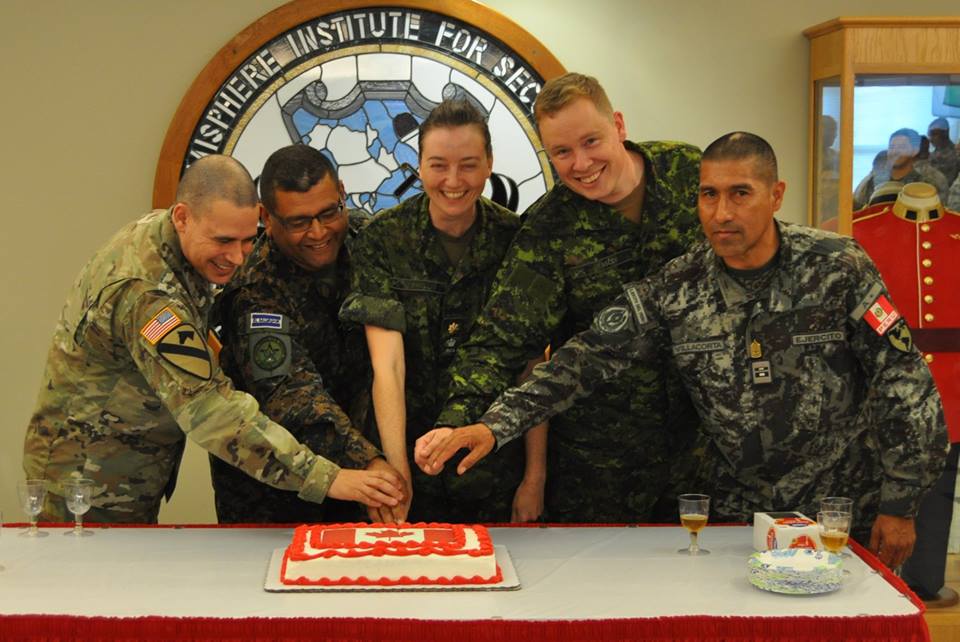 RMC 142 birthday.  We expect an article and photos from the college celebration last week in our next Issue.