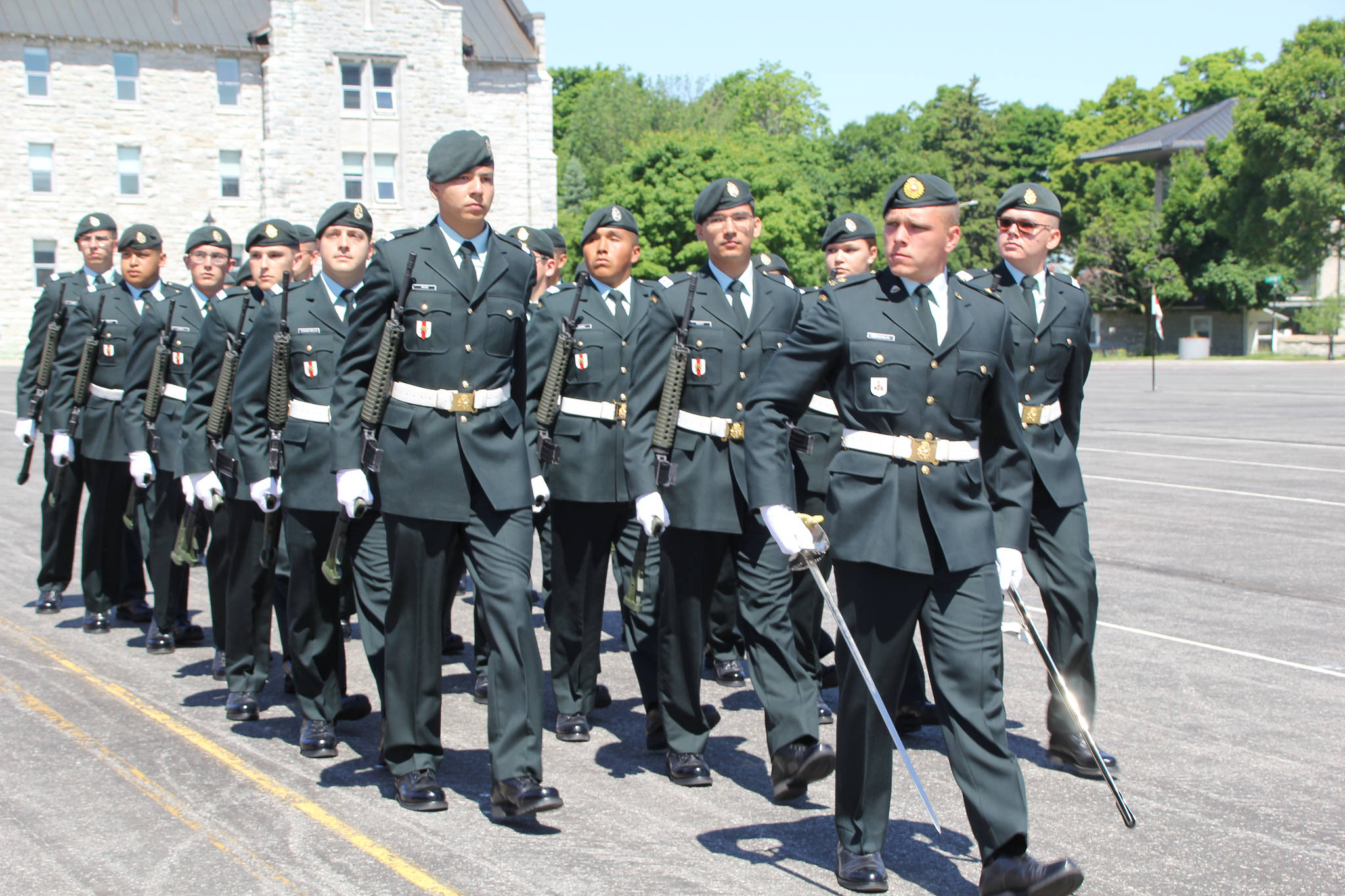 The Aboriginal Leadership Opportunity Year (ALOY) concluded their 11th year this past Friday, 15th June with an impressive performance on the RMC Parade Square.

The ALOY program was created in 2008 to provide a military education and learning experience for members of aboriginal communities in Canada.

The Reviewing Officer was 15706 LGen Paul Wynnyk, Commander of the Canadian Army and Canadian Armed Forces Champion for Indigenous Peoples.

The ALOY school year is a busy one. These Cadets received Military Leadership and Physical Fitness training. They have taken up to eight University Credits over two academic terms and participated in Indigenous Cultural events and programs.

Top Candidate Award.  This award is presented to the ALOY Cadet who, throughout the program, demonstrated high performance, teamwork, esprit de corps, and integrity across the four ALOY pillars of Academics, Athletics, Military and Culture.  This year’s recipient is OCdt Rustemburg

ALOY Peer Award.  This award is presented to the ALOY Cadet selected by his or her peers that has made an outstanding contribution as a team member across the four ALOY pillars of Academics, Athletics, Military and Culture, over the course of the year. This year’s recipient is OCdt Kakekagumick

Out of this year’s class of 21, 16 will join the Regular Officer Training Program (ROTP) at either RMC or RMC Ste Jean, three will become Non-Commissioned Members and two will bring the skills they learned over the past year at RMC back to their communities and to their future careers. 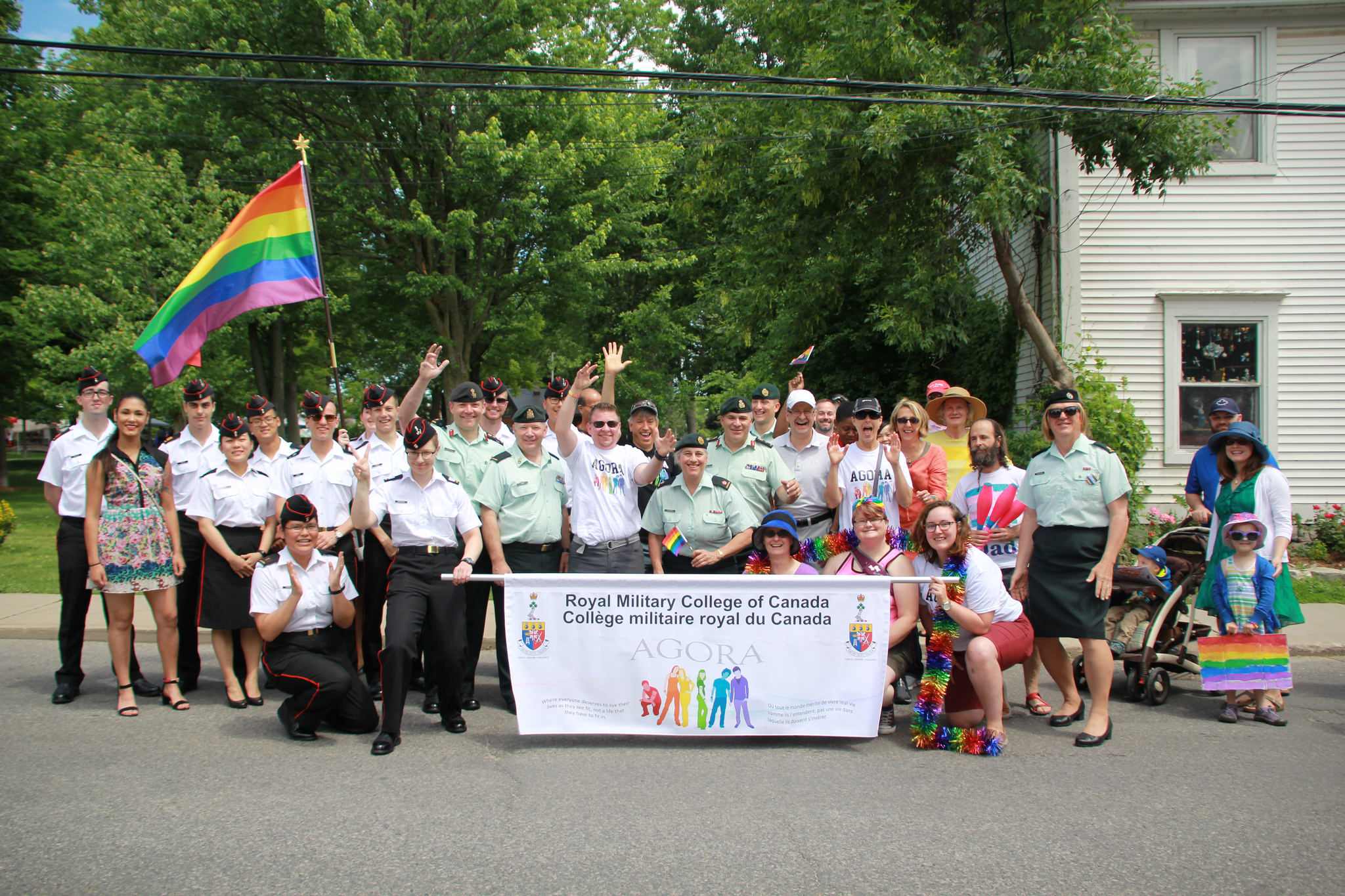 At 0730hrs, on the 16th of June 2018 the Canadian flag rose to its perch above the parade square as it does every other day of the year. However, this day it would be different. On what habitually is an unoccupied halyard reserved for special occasions, rose the rainbow flag of the LGBTQ+ community; a symbolic gesture to the event of the day.

On that sunny day in a normally quiet recess from the main street of downtown Kingston, forty members of the Royal Military College of Canada (RMC), cadets, professors, and training wing members alike, came together to form a contingent in the 2018 Kingston Pride Parade. This celebration of Pride Week and the display of support for the LGBTQ+ community is representative of RMC’s and the Canadian Armed Forces’ belief in the principles of inclusiveness, equality, and dignity for all.

The RMC contingent made a bold presence which was underscored by the accompanying piper and drummer   Beginning from Skeleton Park the procession made its way through the vibrantly decorated downtown core of Kingston along Princess & Brock streets; each flanked with supporters of the LGBTQ+ community. While the parade concluded at Skeleton Park the festivities were far from terminating.

What ensued was a jamboree in Kingston’s downtown area in which live music, activities, and food added to an environment conducive to the mingling of members of the College and the Kingston community. The warm embrace of the sun cast a most agreeable aura on the remainder of the day as the events tapered out.

Concluding with its setting following the flag’s descent from its perch above the parade square, thus marking the end of the day’s festivities. Participating in this event, a first in the College’s history, was an effort spear headed by the founder and president, Mr. Samuel Meinhardt, of the College’s LGBTQ+ support group AGORA, with great moral support from the Commandant, Brigadier General S. Bouchard. Due to the event’s positive success and participation of the RMC community, continued involvement in Kingston’s Pride Parade is anticipated.

More photos from the Pride Parade by 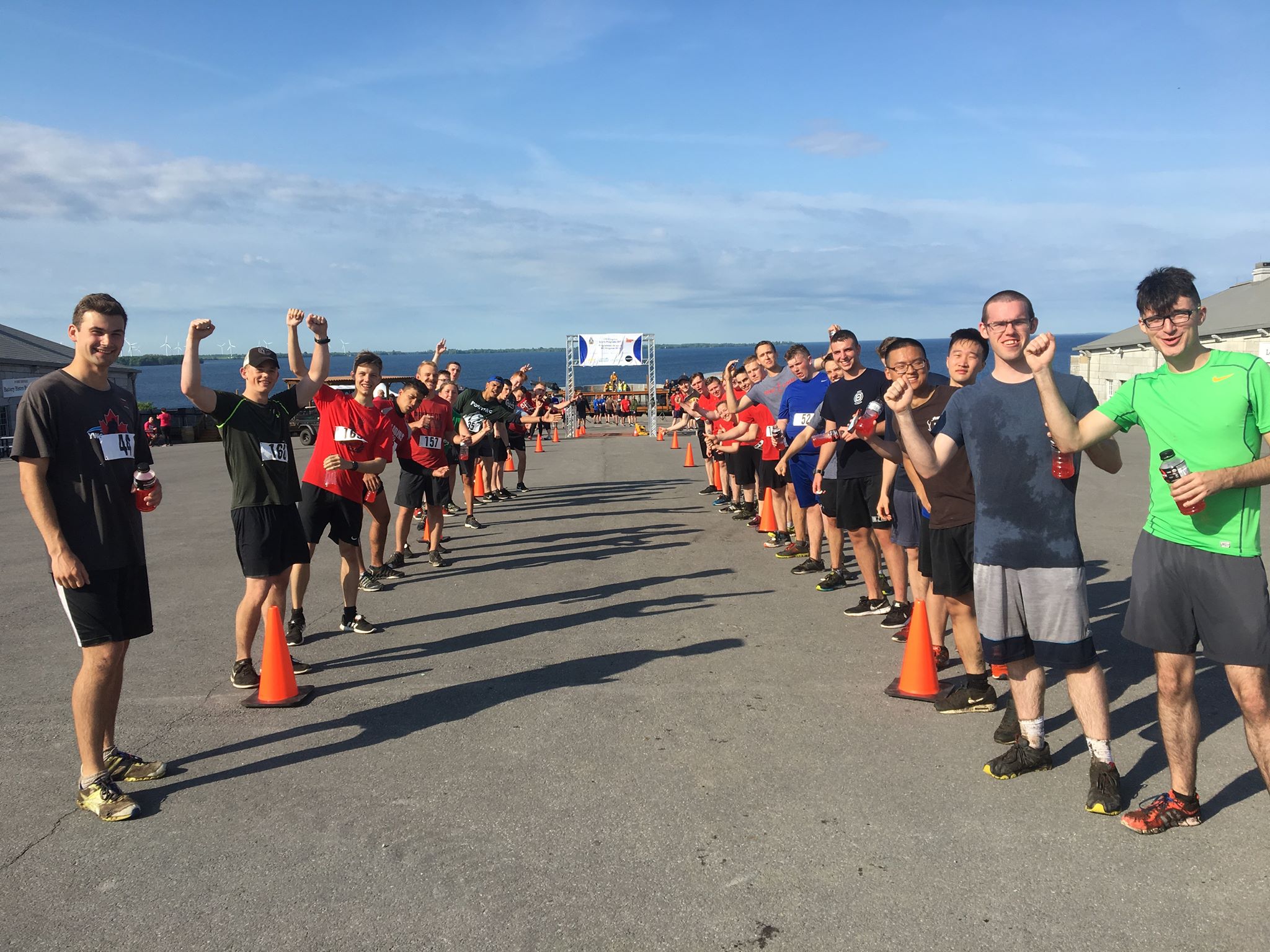 Cannonball Crush a break from the classroom for many 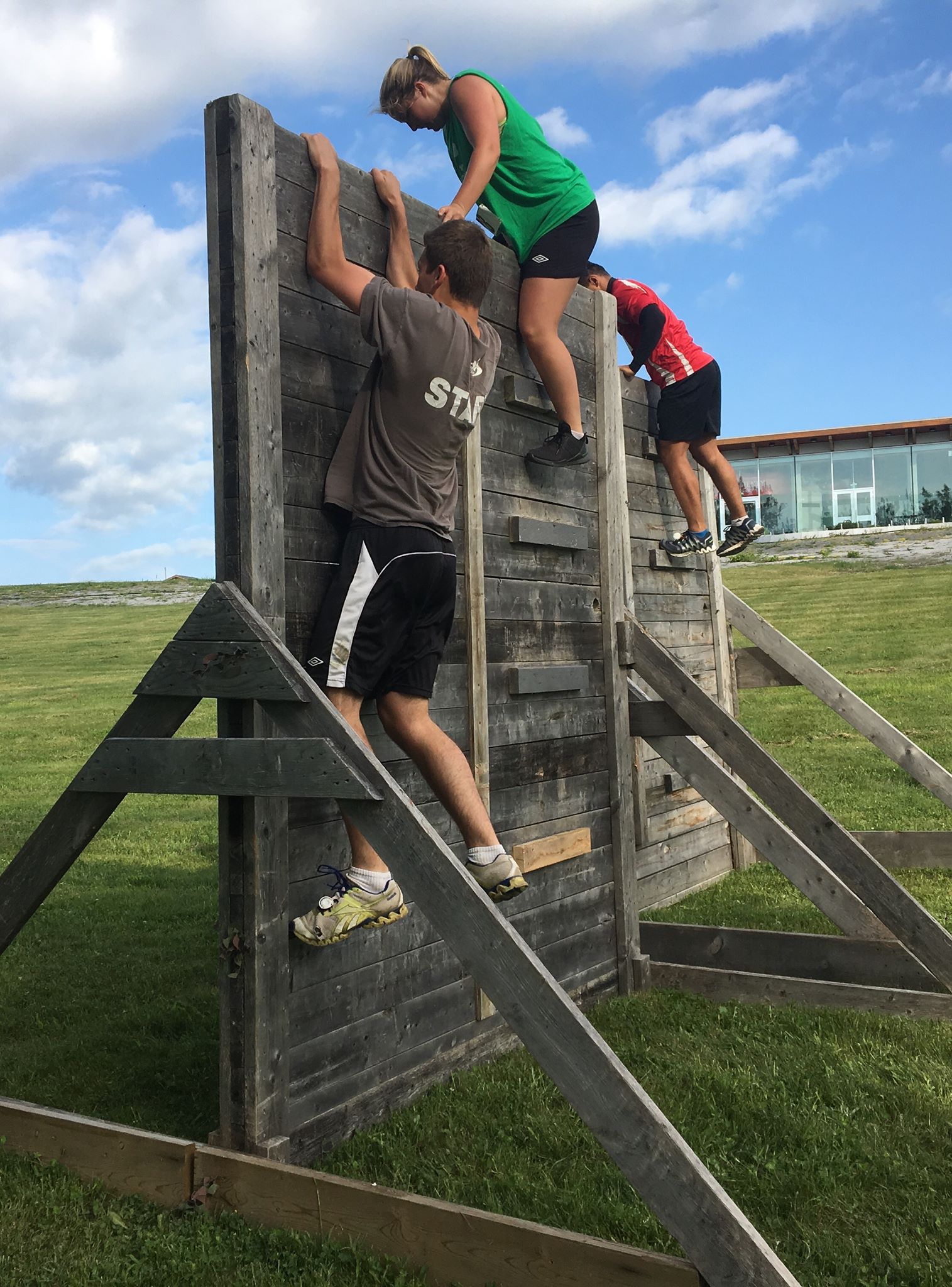 The annual Cannonball Crush, which is a 5 KM obstacle course filled with 15 challenges throughout the route, took place on the 8th of June this year for all military members at Fort Henry. This year all military personnel and their relatives got an opportunity to participate in a practice run before the actual day. Many people, both from CFB Kingston as well as RMC, ran this course.

From RMC many Officer Cadets along with the College staff teamed up with colleagues, civilians and PSP staff to run this for the very first time.  As Naval Cadet Patel said “this was an amazing experience to have. The chance to be part of the Kingston community and get out and build camaraderie with the other cadets here with me is really awesome”. 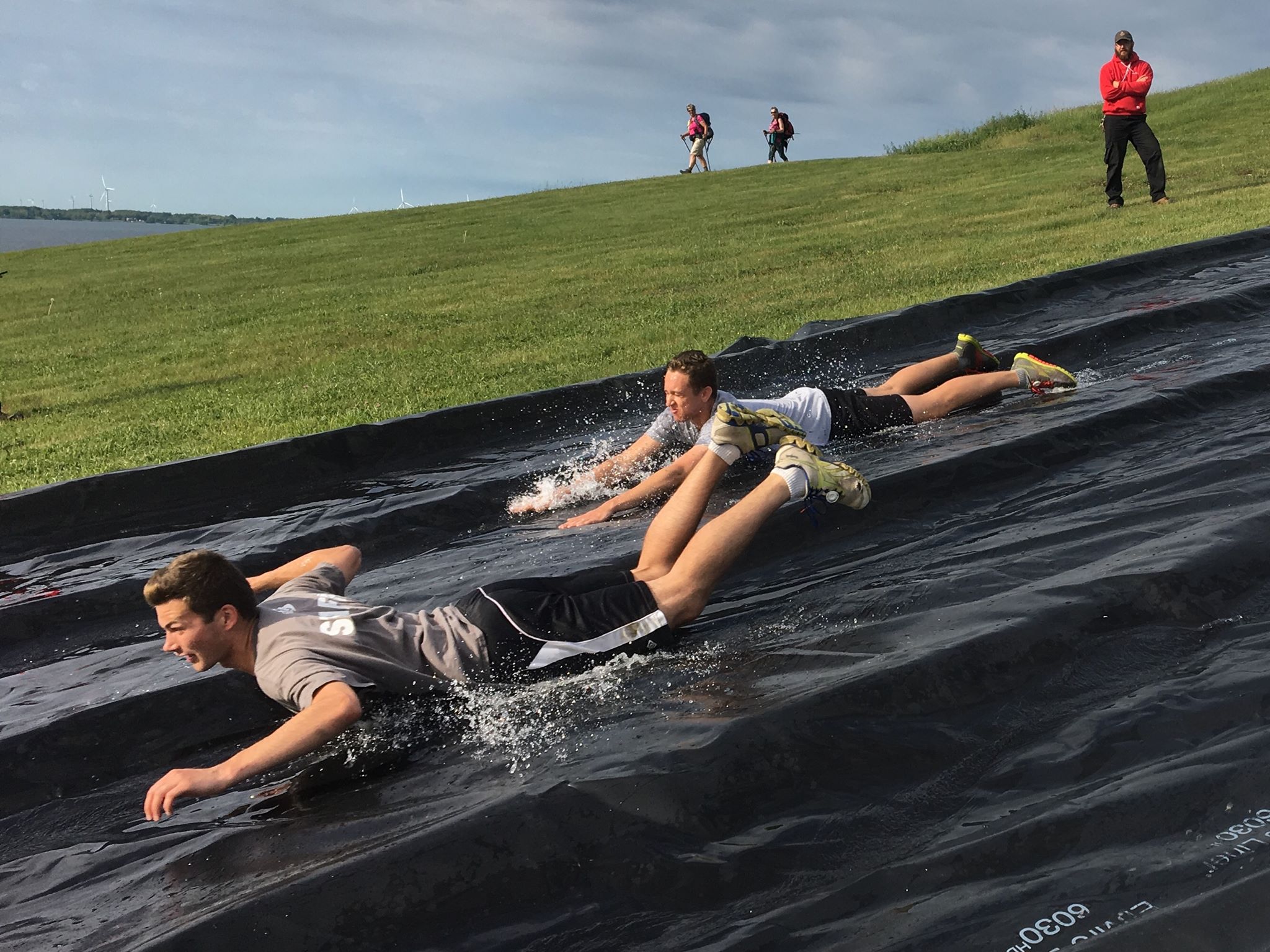 Many Cadets are spending their summer at the Royal Military College are attending classes to achieve their bilingual profile.  Two of the classes along with their professors decided to have a friendly completion against each other and took this opportunity to practice their French skill in a less formal and fun environment. Officer Cadet Ryan Wells from the winning class said “running the cannonball crush was good way to put the French learned in class into a social context”. Also noteworthy, OCdt Hannah Hollander came 3rd in the females 34 and under category, an amazing accomplishment.

All in all, this was a very fun yet challenging morning for everyone who participated.

Dr. Darrell Menard: "It may be time for some of us to re-invent ourselves"