Leadership and Its Initiatives on Several Levels to Good Effect

In the progress of a military service career of two or more decades, officers particularly will be placed in situations of ambiguity where the resources under control are minimal to inadequate to the mission at hand.  If they accept the status quo and operate within their constrained circumstances they may make do.  Or, they may produce a sub standard result when, if they looked beyond their immediate organization, there may have been other resources and alliances that could have compensated for the shortfalls in resources.

The following vignette examines one military organization’s leader response to a too constrained resource environment against mission and the innovative approach taken by these leaders.  Specifically, the vignette addresses a leadership approach that built relationships and bridges with other military and civilian organizations within the geographic area that dramatically compensated for shortfalls.

The senior infantry captain had recently assumed the plans, operations and training officer role in the 1st Army Reserve Officer Training Corps (ROTC) Region 1 Instructor Group, a battalion level operation, and the University of Massachusetts’ Amherst Campus in Amherst, Massachusetts.   The program had since the advent of the Vietnam War and as a result of security issues for weapons storage/security, lost almost all military equipment of consequence for tactical training on campus.  For example, no M-16 Rifles, the current service rifle, were authorized for the detachment. 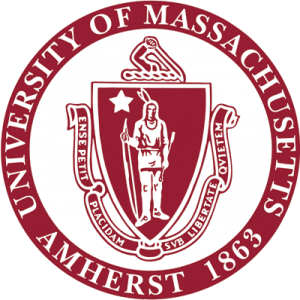 Seal of the University of Massachusetts, Amherst

This was a very different situation than experienced by the captain when a first year ROTC cadet at the sister state University of Connecticut, an hour’s drive to the south.  That organization at the time maintained several hundred M-1 Rifles sufficient to equip the entire cadet corps.  These weapons were stored in an arms room on the campus.

The program the captain was assigned to was able to gain access to necessary equipment by traveling almost two hours to the east to Ft. Devens, Massachusetts where the group could obtain needed tactical equipment through the installation’s Reserve Component Support Directorate.  Unfortunately, funding to support significant elements of the cadet corps up to company or full battalion level at this installation was tight.  One weekend a semester was all that could be supported.  This was not enough. 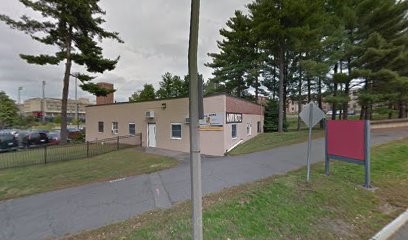 The converted and “understated” M-41 Tank garage that had subsequently served as the campus police headquarters before the Army ROTC Instructor Group was relocated from its purpose built two story brick building across campus.

The entire program had suffered not just in loss of equipment.  Cadet enrollments had plunged from some 900+ cadets to under 100 over the challenging period of the Vietnam War.  But the program was making a magnificent recovery thanks to the hard work of the Instructor Group’s officers, non-commissioned officers (NCOs), and the cadets of the cadet corps.  Regardless of the progress being made, however, the program’s success depended heavily on an effective field and tactical training program that required access to the full range of infantry equipment at the Amherst  campus for up to an infantry company’s allotment or more.

The captain had much to build on from his predecessor’s work.  But access to equipment locally to the level needed, whenever needed, was seen as critical to improving cadet military skills and tactical performance through aggressive local weekend training,

Achieving a high level of military proficiency on campus was critical to individual and collective cadet performance at the 1st ROTC Region Advanced Camp.  The camp was conducted at Ft. Bragg each summer for the 3rd year or Military Science III cadets.  This 5,000 cadet and cadre camp, a brigade size training operation, was one of the pillars of the campus program’s output.  The participating college and university cadet contingents’ performance and success at the camp was a direct result of the quality and level of training achieved on campus.

Another feature of equipment access on campus was the “appeal” actual service gear had on attracting students as prospective cadets.  Infantry small arms, tactical radios and other equipment had an immediate and direct effect on drawing students to the program. The eleven officers and NCOs on the instructor group’s staff, early commission lieutenants (officers who had completed commissioning requirement but had a semester or two remaining to complete degree requirements), Advanced Camp graduate MS IV cadets, and MS III cadets, particularly those who were previous active service veterans, on staff provided a solid instruction and training capability within the cadet battalion and its supporting instructor group cadre to train effectively on campus with the equipment if available.

The captain noted that some early initiatives had occurred to access equipment from local reserve units.  However, an assessment of the reserve unit structure indicated far greater potential for equipment access, to include small arms, than had been developed.  Expanded equipment access would be an essential capability to achieve given the envisioned enhancement of the weekend tactical training program to three field training exercises per semester and six other weekend exercises focused on other critical military skills training per semester.

The captain noted that the Massachusetts Army National Guard’s 26th Infantry Division’s 3rd Brigade and the brigade’s three infantry battalions were organized in the Western Massachusetts area, with the 1st Battalion, 104th Infantry being the battalion in closest proximity, and one infantry company in the neighboring town of Northampton and other companies of the battalion and their armories also within reasonable travel time to allow support of cadet campus training.

Additionally, the Army Reserve had a separate infantry brigade organized in New England.  The 187th Infantry Brigade was then assigned to the New England area with its headquarters located at Ft. Devens, Massachusetts.

The brigade’s 3rd Battalion, 35th Infantry had its headquarters company located in Springfield, Massachusetts a smaller city only a 20 minute drive to the south from the Amherst campus.   Other companies of the battalion were located at reserve centers within driving range from Amherst.

In addition to the Army National Guard and Army Reserve infantry units in the area an infantry company of the 1st Battalion, 25th Marine Regiment also headquartered at Ft. Devens had a rifle company located in Springfield.

It was apparent to the captain that there were four reserve component infantry companies from three different components within a 20-25 minute driving radius from the campus.  Other companies were in range but further out.

All units had cooperated to degrees in the past, though some were uncomfortable with cooperation in the absence of a more formal support agreement from their component superior headquarters.   However, given that the companies were from three different components of two services, the ability to work around different weekend schedules seemed assured if workable support agreements could be negotiated with the appropriate controlling offices and commands.

This need to put instructor group equipment access on a more reliable and established arrangement began a process of discussions, briefings and conferences with the Massachusetts Adjutant General’s Office in Boston, the Reserve Component Support Directorate at Ft. Devens, the Brigade commander of the 3rd Brigade, 26th Infantry Division, battalion commander of the 3rd Battalion, 35th Infantry and the commander of the 25th Marines company in Springfield and other associated commanders. The process fashioned two memoranda of understanding and put in place a system that accessed the instructor group to the necessary equipment and small arms to allow the expanded field training program being pursued to proceed.

The reserve units were offered reciprocal training access and the initiative dovetailed with a larger Army initiative termed the “Simultaneous Membership Program” that followed several months later.  This program allowed qualified MS III cadets to be enrolled in Army Reserve or National Guard units at the pay level of a sergeant as members of those units.  A further incentive to the reserve units to support the requests for equipment would be that a number of the lieutenants that would commission from the program would select to commission directly into the organized Army Reserve or the Army National Guard in the area.

The effect of these different initiatives was the instructor group’s assured access to all necessary equipment sets for the expanded campus field training program.  The result was substantial.

The collective performance of the University of Massachusetts’ annual 31-35 cadet contingent being sent to the 1st ROTC Region Advanced Camp at Ft. Bragg, North Carolina over a three year period rose from 24 out of 98 schools to 12 out of 110 schools (the ROTC Program was experiencing something of an on campus recovery after the Vietnam Era).  For a civilian school from New England, this collective performance standing improvement over a three year period was a clear reflection of the impact the enhanced equipment access had on the program’s effectiveness. 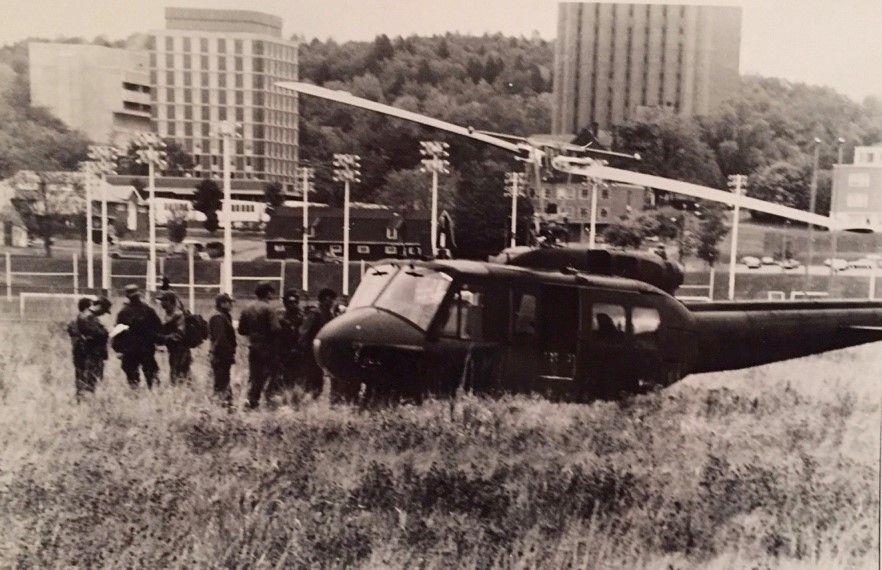 The following sequence of photos indicates the level of support achieved by the initiatives of the University of Massachusetts ROTC Instructor Group with area Reserve Components commands. Flight missions of up to 6 UH1H and one OH58 aircraft were assigned from reserve aviation units to support air assault training. Above cadets receive safety orientation on the aircraft. (All landing and pick-up zones, LZ/PZs, were surveyed and approved by the Federal Aviation Administration.) 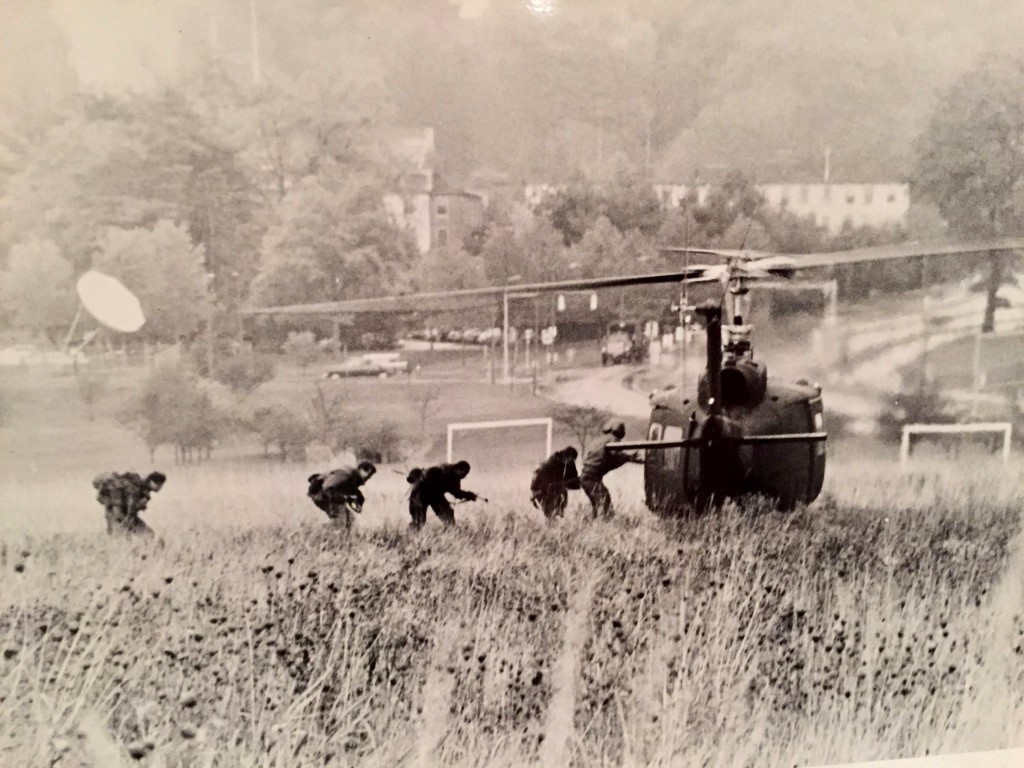 Cadet squad members loading their assigned UH1H on the PZ. 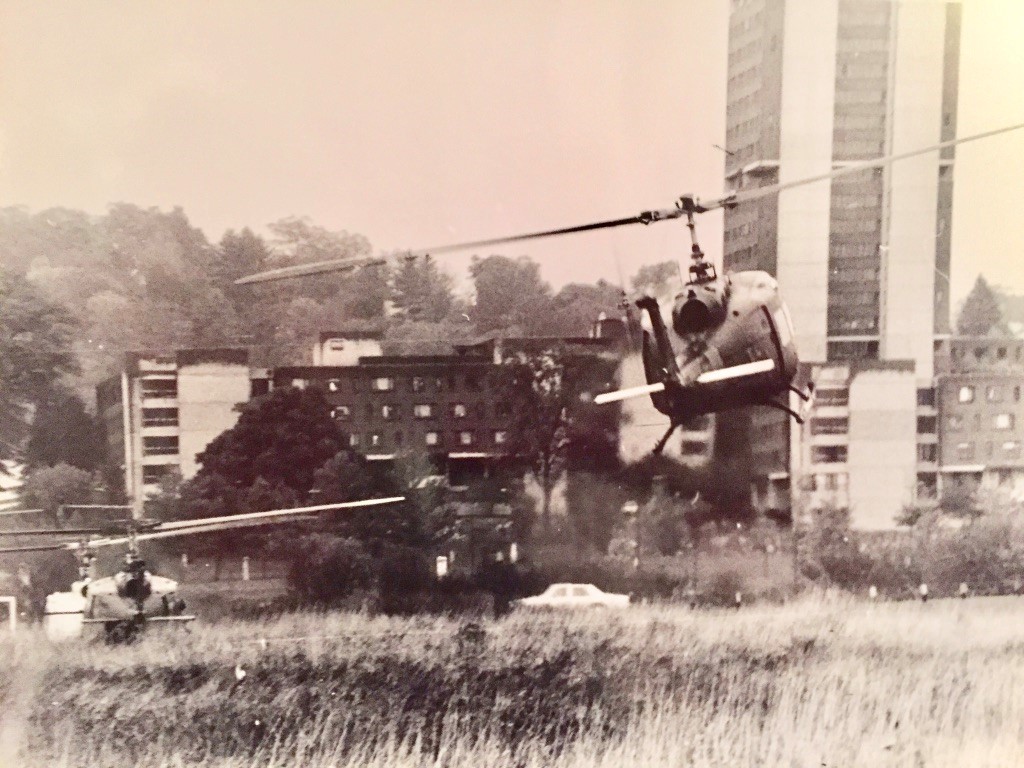 UH1Hs lifting off from the PZ on the University of Massachusetts Amherst Campus enroute to the LZ in the maneuver box developed north of the campus.

That the University of Massachusetts cadets were competing very successfully with such schools as the Citadel, North Georgia Military College (now North Georgia University), Norwich University, Virginia Military Institute, and Virginia Polytechnic Institute and State University, full service military academies of stature, was a great achievement.  But a significant aspect of this success and competitiveness as noted was the enhanced equipment access that leaders in Western Massachusetts of the Army National Guard, the Army Reserve, and the Marine Corps Reserve made available to the Instructor group.  Critical in this arrangement was the support provided by the Adjutant General’s Office of Massachusetts in Boston and the Directorate of Reserve Component Support at Ft. Devens.

These leaders made equipment available during its non-use by the equipment’s assigned reserve component units by the cadet corps at the university for enhanced field training.  The result was a sustained higher recruiting effort by the instructor group and the noted remarkable performance improvement by the New England school’s cadets at Ft. Bragg.  Over a three-year period some 100 officers were accessed to the active army and the two reserve components.  Including a fourth year affected by these program enhancements, some 130 highly qualified lieutenants were accessed to all components of the Army of the United States.

As a demonstration of effective collective leadership across a number of organizations that produced a concrete successful long term effect, I can think of few better examples.  The leaders created an exceptional synergy from the resources at hand.  They produced a result that greatly exceeded the likely contribution the separate resources they controlled would have produced had they not cooperated.   The lieutenants commissioned from the program that was enhanced by this cooperative effort of leadership provided in turn leadership to the components of the Army of the United States for the next 6-30 years, many rising to senior rank and position.

Note: in 2005, in an Army wide reorganization, the 104th Infantry Regiment was amalgamated with the 181st Infantry Regiment, the latter perhaps the oldest regiment in the U.S. Army tracing to 1636 as the Middlesex Regiment, a unit that has served as an English, British and U.S. regiment since.  The 104th Infantry was almost as ancient, initially organized as an English train band in Springfield, Massachusetts in 1639 with following reorganization in 1662 as the Hampshire Regiment.