WHEN WAS THE SURGEON’S QUARTERS/COMMANDANT’S RESIDENCE BUILT?

Historians had felt that the Surgeon’s Quarters was likely built by Commodore Robert Barrie in the early 1820s, about the same time as the Stone Frigate. They were strongly influenced by a painting of Point Frederick, owned by RMC, which has been widely published (Figure 22). Although not signed, it is attributed to Lt. Henry Wolsey Bayfield who wished to be known as “the surveyor of the Gulf and River St. Lawrence,” even though this tribute understates his many accomplishments which include the survey of the Great Lakes.

The Bayfield painting was thought to be painted in 1821, and this date became important because it depicts the Surgeon’s Quarters – seen on the third crease next to the Hospital in Figure 22 (detail in Figure 23).

To better view the details in the painting, the curators retrieved the original. An examination of the original and using the 3D model for view orientation, allowed for identification of the Hospital and the Surgeon’s Quarters. As seen in the detail in Figure 23, the Hospital appears as the larger building on the right. The smaller building on the left is the Surgeon’s Quarters. The year is 1817. 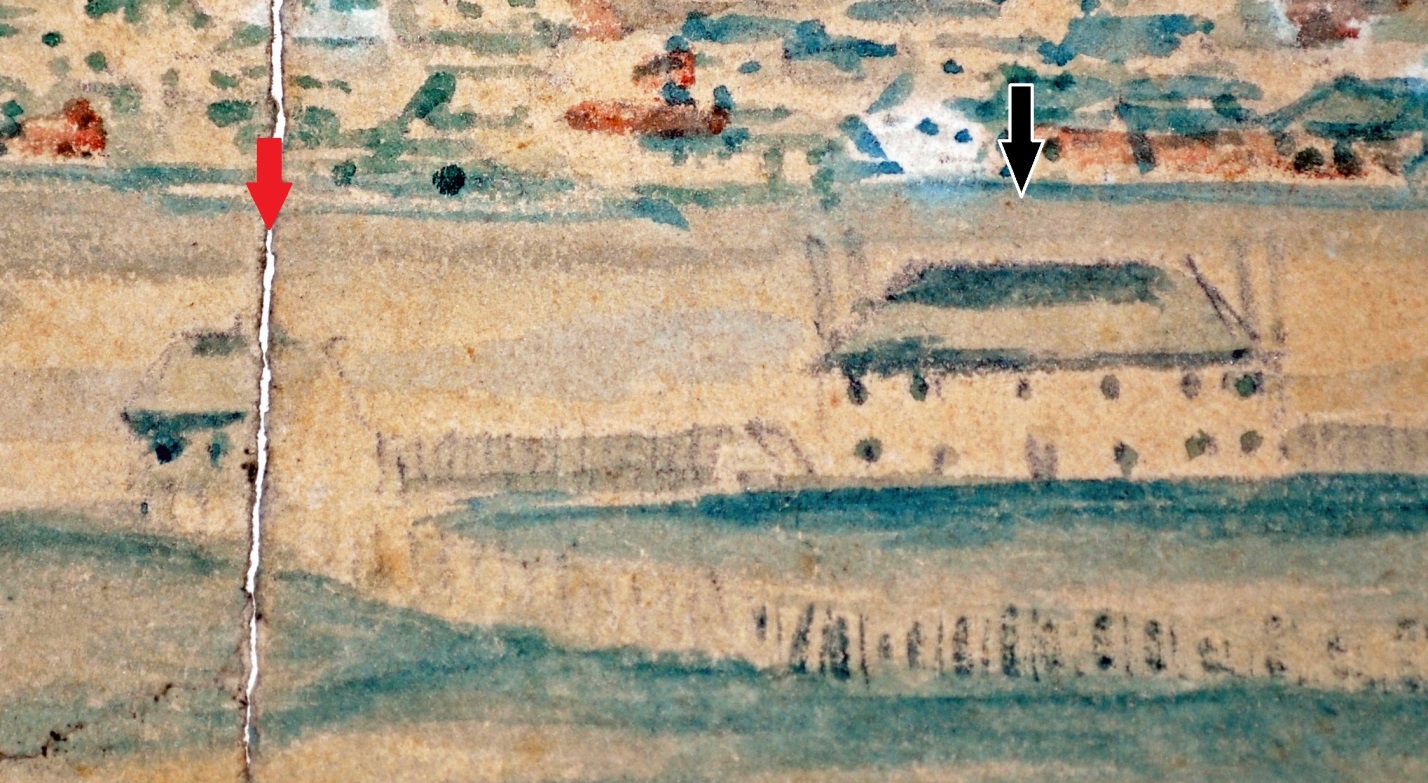 Figure 23. Surgeon’s Quarters (red arrow) next to the Hospital (black arrow) in 1817, as portrayed by Lt Bayfield (overall in Figure 22). Coll. RMC.

This made the scene on a woodcut dated 1819 (Figure 24) even more significant. Again, the Hospital is identifiable. An image of a building resembling the Surgeon’s Quarters appears to the left of the Hospital. 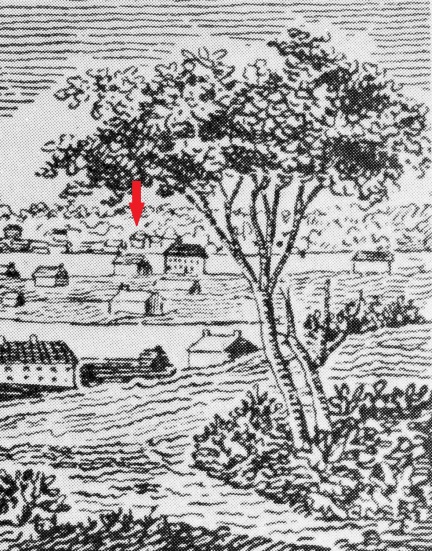 Finally, in the spring of 2017, while Susan Bazely and John Grenville were visiting London (UK) to conduct research, they came across the colour original map from a survey of 1817 by Lieutenant Smith of the 70th Infantry. The map was not published until 1820. They quickly recognized the importance of the date of the survey and found a building, between the “a” and “l” in Hospital (Figure 25). There was no mistaking the position of this building in relation to the Hospital and fence line — a fence line that still exists. The building was the Surgeon’s Quarters 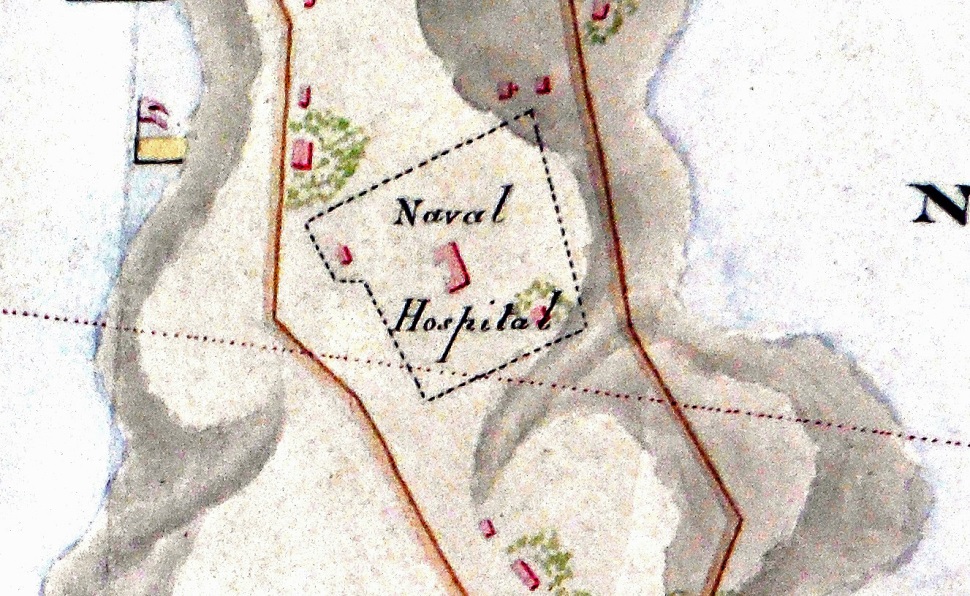 These findings led to the conclusion that the Surgeon’s Quarters was likely built during the summer of 1817 in response to an ad that appeared in the Kingston Gazette dated December 16, 1816. As seen in Figure 26, the ad invites “House Builders” to erect two small stone buildings as appendages to the Naval Hospital at Fort Frederick in the “early part of next summer.” 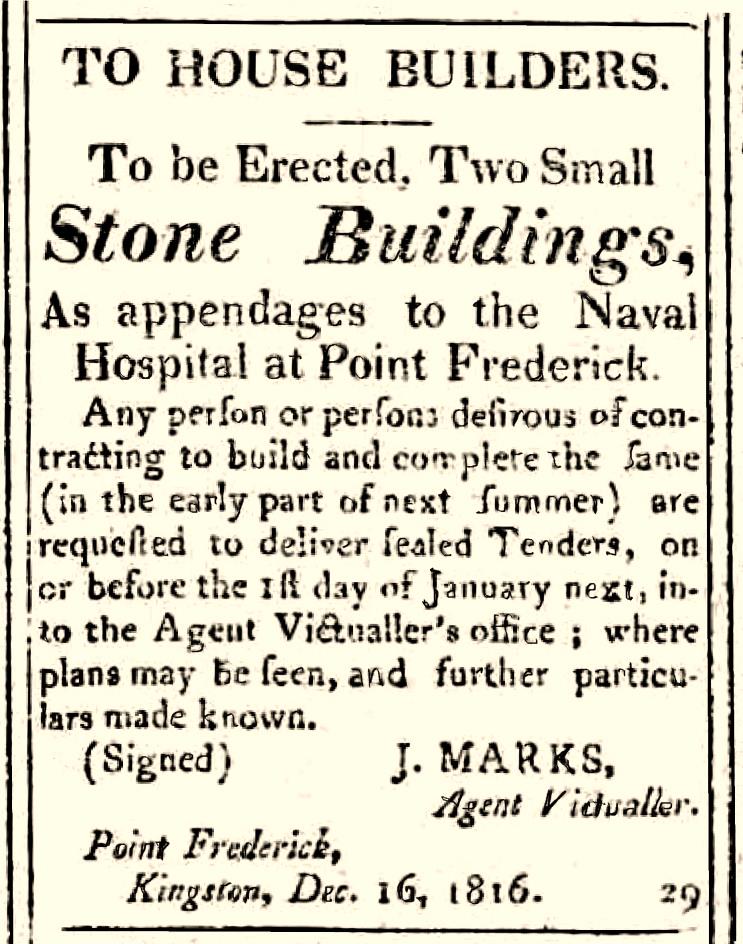 Figure 26. Ad in the Kingston Gazette of December 21, 1816, asking for tenders to construct, by following provided plans, two stone buildings as appendages to the Naval Hospital.

This makes the Commandant’s Residence, or at least the earliest part of the Residence, the oldest building on Point Frederick.

A SURPRISE – THE NAVAL HOSPITAL KITCHEN

There remained another old stone building (Figure 27, also Figure 17), the “Kitchen to the Old Naval Hospital”, as labelled in 1837. If the Kitchen really did serve the Hospital and if that service dated back to the War of 1812, was it possible that the Kitchen was even older than anyone has considered?

During the War of 1812, almost everything on Point Frederick was built of wood and very little of stone. Because this was well known, it was generally considered by historians that the Kitchen must have been constructed after the war, perhaps contemporary with the Surgeon’s Quarters. And perhaps it was the second of the two buildings described in the December 1816 ad (Figure 26). 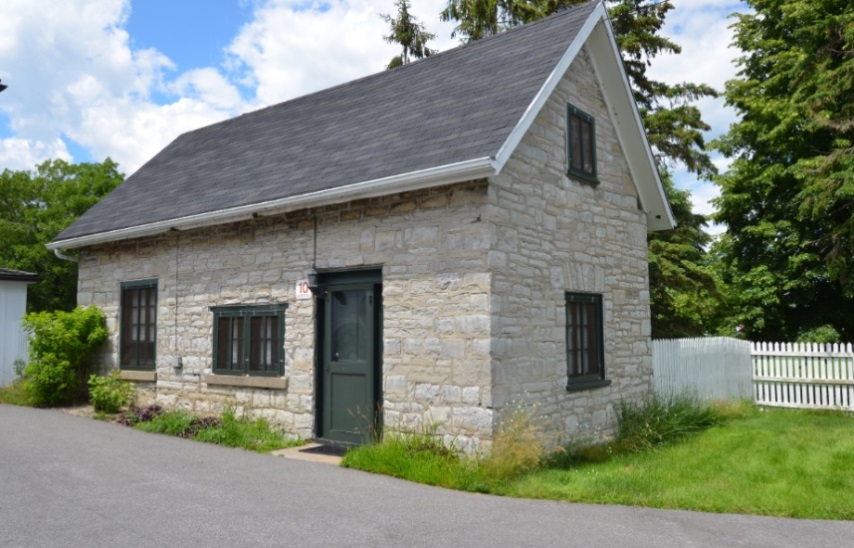 Figure 27. South-east view of the Commandant’s Guest House (Kitchen for the Naval Hospital) in 2017. Dr McKendry points out that the voussoirs over the lower window in the gable wall suggest it is an original one, whereas the concrete sills in the south wall windows suggest later changes. Photo RDB.

Relative to the location of the Hospital, the Kitchen was south and east, far enough away that a fire starting in the Kitchen would have been unlikely to advance beyond the stone walls and reach the wooden Hospital. Yet near enough, that food could readily be carried to the staff and patients. It was known that construction of the Naval Hospital was undertaken in 1814 and receiving patients soon after. During her research, Susan Bazely discovered Naval Hospital salary information that listed a Surgeon from October 1 to December 31, 1814. Twelve other staff were also included.

The quarterly accounts of sick and wounded at the Naval Hospital start November 25 to December 31, 1814, although patients are listed as early as July 1814 with 145 treated during the 1814 quarterly report. While it is evident that casualties of the war were treated at the Hospital in 1814 and 1815 and after, it appears that the Hospital ceased operations at the end of 1817.

So, why would the Naval Hospital – only three years old but soon to close – need a stone kitchen to be constructed in 1817?

Figure 28. Touched up detail from the Bayfield 1817 painting. There was strong concordance of the position of the Kitchen (arrow) and Hospital with the model. Coll. RMC; Model RDB.

In the summer of 2017, Bob Banks and Patti Saunders were doing research at the Library and Archives Canada in Ottawa when they came across a two-page hand-written note (Figure 29). The note was not dated but was found within a group of numbered pages that dated from 1816. The papers concerned the Royal Naval Hospital Kingston. 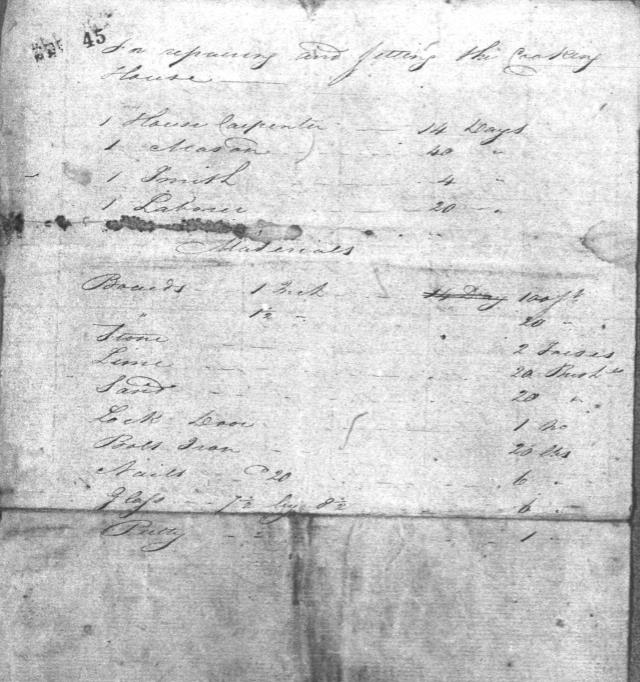 The note was an estimate of resources needed to repair and fit the “Cooking House” and included a large quantity of stone, although not nearly enough to construct the Kitchen. It also described the need for a door lock, iron, glass and lime, and called upon the services of a mason for 40 days, carpenter for 14 days, smith for 4 days, and a labourer for 20 days. There is no indication of roofing materials such as shingles or tin.

This note seems to be part of an effort to complete or repair a building already in existence and either damaged or unfinished. Since the note was in papers specific to the Naval Hospital, it can only be the Hospital Kitchen. This note indicates a construction date of the Kitchen that is no later than 1816, and likely earlier, possible 1814 or 1815, given that the note describes the need for “repairing.”

The Kitchen was, therefore, contemporary with the Hospital and in use at a time that served the needs of Hospital staff and patients.

News of the War of 1812 reached Kingston in June 1812. Preparations for the war began immediately, particularly at Point Frederick where work began to improve the dockyard and squadron which (from May 1813 on) became the largest freshwater fleet of the Royal Navy. Tenders were invited for construction of a hospital that would contain 100 men and by June 1814 the hospital was receiving patients.

On March 1, 1815 preparations for the War of 1812 summer campaign were halted when the news arrived that a peace treaty had been signed. According to RMC historian and librarian John Spurr, although operations on Point Frederick were stopped, the senior staff agreed that the Squadron should be kept in a state of readiness until further orders were received from London. Captain Sir Robert Hall traveled to England to obtain orders and, when he returned in September 1816, he felt that he had “secured an agreement that the wooden structures in the yard would be converted to stone.”

On December 6, 1816, ten days before the call for tenders for two small stone buildings (Figure 26), Captain Hall called for tenders in the Kingston Gazette for a much larger version of today’s Stone Frigate. While the scope of that project proved too much for local contractors, Hall was “able to proceed with the construction of a few small stone auxiliary buildings…” It was not until May 1817 that he received orders to mothball the Squadron in accordance with the Rush-Bagot Agreement.

It is likely that the Surgeon’s Quarters, which over time evolved to become the Commandant’s Residence, was one of the “appendages” to the Hospital in the tender call of December 16, 1816 and was designed to accommodate the medical staff. Hall had the funds and authority to move forward with the construction of stone buildings. Even with the closing of the Hospital, likely near the end of 1817, the need for a Surgeon and medical care at the Naval Dockyard remained.

The first occupant of the Surgeon’s Quarters may have been Surgeon Richard Tobin who served from November 1, 1816 to until at least June 30, 1817. It was almost certainly occupied for many years by Dr. George Colls, who came to Canada with the Royal Navy in 1816 and spent most of his time at Point Frederick until its closing in 1834. Documentation of Dr. Colls medical practice shows up in the papers of Sir Robert Barrie, the memoirs of Barrie’s daughter, and the writings of historian John Spurr. Dr. Colls delivered at least one of Barrie’s children. He probably delivered the great Canadian poet Charles Sangster (1822-93), who was born and grew up on Point Frederick. It is likely that the old section of the Commandant’s Residence was visited by Sir Robert Hall (before his death in 1818) and many times by Commodore Barrie, who lived nearby – close to today’s Memorial Arch.

The Kitchen, now the Commandant’s Guest House, was likely built and operating while the Hospital was active, no later than 1816 but possibly earlier while the sick and injured of the War of 1812 were being treated. Despite altered window openings and the loss of its chimney, the building remains fundamentally unchanged in its exterior appearance and may be the sole remaining structure on Point Frederick from the War of 1812. As such, it would be the oldest structure on Point Frederick, one of the oldest surviving stone buildings in the Kingston area, and possibly the oldest functioning War of 1812 building in the Canadian Forces.

The oldest section of the Commandant’s Residence was 200 years old in 2017.

The Kitchen is even older. 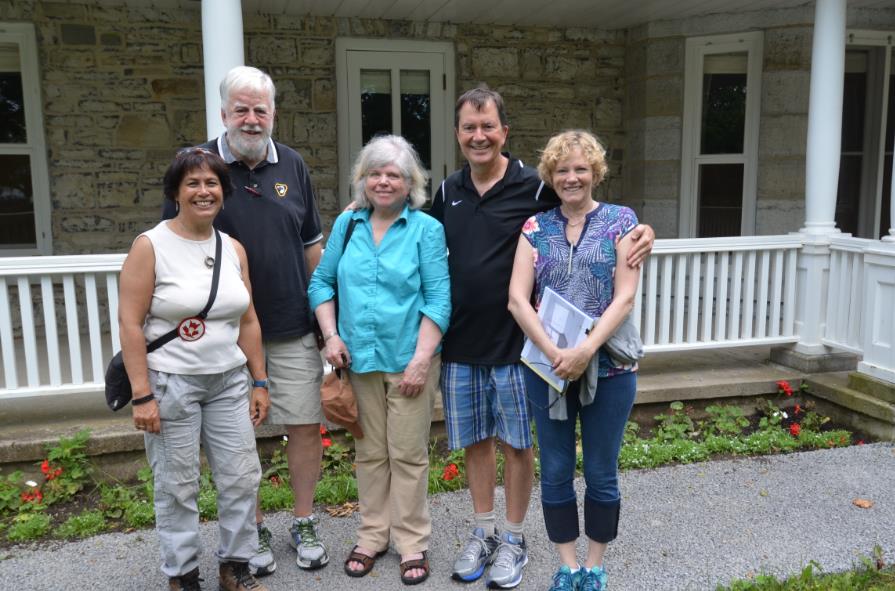 A History of La Chasse-Galerie - Part 7