11034 Lieutenant-Colonel (ret’d) Brent Anderson (RRMC RMC 1976) has worked for EnCana since February 2006. He joined the air force in 1972, and also spent four years at Royal Roads Military College in Victoria and Royal Military College in Kingston, Ont. earning a degree in Engineering. He retired in 2006 as a fighter and test pilot with the Canadian Forces. He spent two years as the Commanding Officer of 410 (CF18) Tactical Fighter Squadron in Cold Lake, from 2002-04, and was the Wing Operations Officer in Cold Lake from 2004-05. He was inducted into the Wall of Fame at South Peace Secondary School on April 8, 2006.(class of 1972). His membership in the local Air Cadet Squadron 353 at the age of 12 as steering him toward a life in the air. “I didn’t come from a military background. My parents, aunts, uncles — no one was in the military. But once I joined Air Cadets, then I got the interest in flying and becoming a pilot,” Anderson recalled. “I ha d a great opportunity to do a lot of flying in fighter aircraft over many, many years. I had the opportunity to do an awful lot of things for the first time that hadn’t been done before,” he said, recalling he started on the F5, and then was part of the inaugural training class on the very first F18 back in Jan. 1983. “That was exciting. The airplane was brand new.”Anderson also was one of the only pilots from a western nation to fly within 10 kilometres of the border with the Soviet Union at a time when the Cold War was still impacting world affairs. “If you put it in perspective, this is before the Berlin Wall came down. At the time I was on an exchange tour with the Royal Norwegian Air Force,” Anderson recalled. “Normally Canadians, Americans couldn’t fly that close to the Soviet Union in Norway, but because I was in a Norwegian airplane and conducting patrols near the border, I was able to do that. At the time, (10 kilometres) was the closest you were allowed to go to th e border for fear of accidentally straying inside the border.”

15097 Mr John A Brett (RRMC RMC 1985), (B. Eng., P. Eng. Vice President, Marketing and Sales Tantalus Systems Corp.), is responsible for promoting and deploying Tantalus’ cost-effective fixed 220 MHz RF network designed to meet the needs of electric utilities. Prior to joining Tantalus, John was the General Manager of AAL Autometrics Associated Ltd., a supplier of software for substation electric apparatus management, and Regional Sales Manager for Dynapro Systems Inc., a supplier of industrial automation equipment. John brings over 15 years of technology and sales experience to Tantalus and is a former Canadian Naval Officer with a degree in Electrical Engineering from the Royal Military College of Canada. 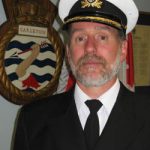 Commander Douglas Bancroft was granted command of HMCS Carleton in summer 2007. He joined the naval reserve in July 1973 as an ordinary seaman naval signalman. He subsequently became commissioned as a Maritime Surface / Sub-surface (MARS) Officer, and was awarded a Regular Force bridge watch-keeping certificate in 1977.After attaining a Minor Warship Command qualification, he took command of his first HMC Ship at the age of 26. Since then, he has commanded five other HMC Ships for a variety of periods, including HMCS YELLOWKNIFE. In addition, he served at sea for one NATO tour of duty. Away from the navy, Commander Bancroft is a career public servant, and is the Director of Marine and Ice Services with Environment Canada. He holds a Masters in Science in Oceanography from the Royal Military College. He calls Kanata home with his wife, Eileen, and daughter Emily. In his meagre spare time, Commander Bancroft can usually be found canoeing with his Scout Troop.

Dr. Nancy Taber is an Assistant Professor in the Graduate and Undergraduate Department, Centre for Adult Education and Community Outreach, Faculty of Education at Brock University in St. Catharines, Ontario. She teaches Gender in Adult Education, Adult Teaching and Learning, Critical Perspectives in Adult Education and Introduction to Educational Research. Her research interests include Adult education, workplace learning, gender and militarism, sociocultural learning across the lifespan, learning masculinities and femininities in everyday life, ruling relations and the social organization of knowledge, mothering and caring work. She earned a B.A., Political Science, Royal Military College followed by a M.Ed, Adult Education, Mount Saint Vincent University. She holds a PhD(C), University of South Australia. She spent 13 years in the Canadian military, including time as a Sea King helicopter air navigator. She also spent time as a Wing Relations Training Coordinator, developing and delivering programs in conflict resolution, interpersonal relations, and acceptance of diversity.