Many readers will be pleased to hear that “The Major” – S109 Danny McLeod is up and about these days and feeling much better. Danny had been ill over the past few weeks. So much so, that he was unable to attend the Branch Spring Dinner a couple of weeks ago in Toronto.

The former WWII veteran and RMC Director of Athletics (1960-71) is pictured delivering an eloquent toast to – “fallen comrades” during the Kingston Branch Spring Dinner which was held last week at the RMC Senior Staff Mess.  Click on photo for better view.

8813 LCol (Ret`d) John D. Gibson CD (RMC 1971) is a Barrister and Solicitor in private practice. He and his wife Lynette A. Stethem live with their children in Toronto, Ontario. He is a Member, Society of Trust and Estate Practitioners (STEP). John was President of the Royal Military Colleges Club of Canada President 1997 – 98.

He is an occasional lecturer, Canadian Bar Association, Ontario Branch, on topics relating to the law of Charitable Organizations. He served as a reservist as National Legal Advisor, Civil Military Co-Operation (CIMIC), National Defence Headquarters, and Member, Army CIMIC Working Group, 2001-. When he graduated from the Trinity College School in 1967, he was awarded RMC Club Foundation Scholarship. When he graduated from the Royal Military College of Canada in 1971 with a Bachelor of Arts (1st Class Honours) in English, he was awarded Departmental Medal for English, First in the Arts Division and the Edith Boulton Nordheimer Memorial Prize for best essay on a Commonwealth topic. He returned to RMC part-time from 1994 – 98 to earn a Master of Arts (1st Class Honours) in War Studies. He served as co-Chair of several War Studies Symposia at the Royal Military College of Canada: Special Operations: Successes and Failures, Yesterday, Today and Tomorrow (2000); Global Insurgency, Terrorism and Special Operations in the 21st Century (2004); Coalition Special Operations Forces in the Long War (2006). He graduated Barrister-at-Law, Law Society of Upper Canada 1975 – 76 and graduated Juris Doctor from the University of Toronto, Faculty of Law 1971 – 74. He is a candidate in the PhD program in History at Wilfrid Laurier University (all but dissertation).1999 – 2003. He was awarded Commander, Order of St. John, 2004.  john@johndgibson.com

12003 Major (Ret’d) Vincent “Vince” Muolo (CMR RMC 1978) is the Manager, ITS Business Development and Relations at the Communications Security Establishment (CSE). Vince joined CSE in 1989, after serving 15 years in the Communications and Electronics Branch of the Canadian Forces in various command and staff appointments within the army. In 1995, Vince was assigned to the CSE Liaison Office in Washington D.C. After completing his posting in the U.S. in August 1999, Vince returned to CSE Ottawa and was named to his present position. Vince holds a bachelor of engineering in mechanical engineering from the Royal Military College in Kingston, Ontario.

12499 Captain (Ret’d) Carl C Bond (RMC 1980), Eng., CISSP is CEO at Elytra Enterprises Inc., and Director Telecom and Security, DESSAU. With over 30 years of experience as an expert in networking, network security and information signals engineering, Mr. Bond has built a vast experience in project management, having successfully delivered many projects as Lead Technical Manager. Mr. Bond has been an officer of the Canadian Armed Forces, a systems engineer, and a communications, security and intelligence engineer for the Centre for Telecommunications Security. In 2000, he founded Elytra, a firm specialised in IT security which now forms part of the Dessau group. Mr. Bond holds a Bachelor’s degree in Engineering Physic from Kingston Royal Military College as well as a Masters degree in Engineering from Carleton University. He possesses CISSP and CGEIT accreditations and is a member of many professional associations such as the Quebec Order of Engineers (OIQ), ISACA, ISSA and AFCEA.

14424 Captain (Ret’d) Hugh S Ellis PEng., CISSP (RMC 1984) is president of Cinnabar Networks in Ottawa. He graduated from the Royal Military College as a computer engineer. Over the past 24 years, his career has included the Canadian Army Signal Corps, the Communications Security Establishment, Domus Software, Cinnabar Networks (which he co-founded), and Bell Canada. Since January 2008 Hugh has been working part time as a volunteer, and as an IT Security consultant advising government departments, health care agencies, and police and intelligence agencies on security and privacy.

15664 Mr David J. McMahon (RRMC RMC 1986) has an honours degree in computer engineering from the Royal Military College of Canada and has spent the last 25 years with the military, intelligence and security community both in the public and private sectors. Dave has been engaged in the spectrum of operations from special-forces, drug interdiction, counter-terrorism, information warfare, counter-espionage, and foreign intelligence. David was one of the founding members of the interdepartmental committee on Information Warfare. He is a published author on the subject of the Cyberthreat, the Olympic threat risk assessment, critical infrastructure protection and proactive cyber defence. Dave McMahon is currently the National Security Advisor for Bell Canada. 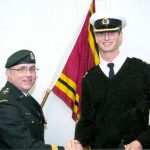 18278 LCdr Brent Walden (RMC 1993) attended College Militaire Royal and Royal Military College and was granted a degree in Engineering and Management in 1993. He served as a combat engineer in various troop commander positions at 4 Engineer Support Regiment, United Nations Disengagement Observer Force and the Canadian Forces School of Military Engineering. In 1999, he transferred to the Reserve Force and served as the DCO of 33 Field Engineer Squadron until 2006.

LCdr Walden was granted a law degree by the University of Calgary in 2002. He practiced until 2006 with the Calgary office of Fraser Milner Casgrain LLP in the areas of commercial litigation and energy regulatory.

G55 Valerie A. Keyes, CD, (RMC 1980) was appointed Executive Director of Canadian Forces Liaison Council in May 2008. Her previous capacity was of General Manager, Policy Co-ordination and Communications at the Canadian Forces Housing Agency. Immediately prior to accepting that position, she was Deputy Director, Western Hemisphere Policy (Latin America and Caribbean Relations), Department of National Defence. She graduated from the War Studies programme at the Royal Military College of Canada with a Master of Arts in 1980, being both the first woman and the first Reservist to do so. Valerie was elected as the first woman President of the Royal Military Colleges Club of Canada in September, 1998 and later served as Treasurer of the RMC Foundation. She is a member of the Atlantic Council of Canada, the National Trust, English Heritage and the Prayer Book Society of Canada, and is a past President of the Canadian Centennial Choir in Ottawa.

Valerie lives in Ottawa with her husband, 12571 Commander Keith S. Keyes (RMC 1980), and their two sons, Tristan and Alastair.