– Was active in Cadets

-Entered RMC on a Dominion Scholarship

-Chose RCEME as his corps

-Had the nickname of Small Paul

-Played Volley Ball for the college in first year

-Went to McGill University for Mechanical Enginerring, graduating in ‘54

-Joined Clarke Steamship Company Ltd for marine transportation. Starting as a Port Engineer and working his way up to Executive Vice-President in 1977.

-Was in the Grenadier Guards for many years, an infantry reserve regiment in Montreal

-Met his wife, Doreen, on a blind date to a New Years Eve Party in ’56, marrying her a year and a half later.

-Enjoys golfing, skiing, hiking, and the Beauty of the Rockies. 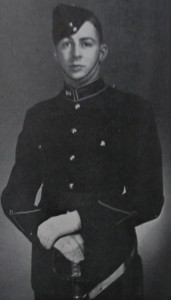