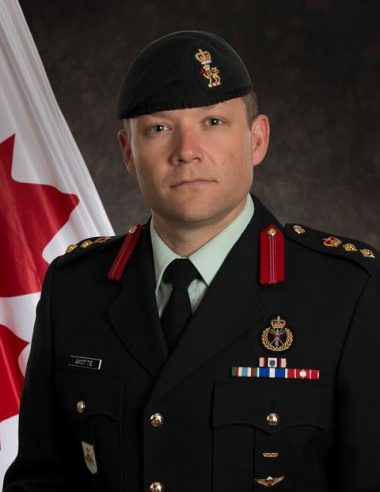 Colonel Ayotte enrolled in the Canadian Armed Forces in 1992 first attending Royal Roads Military College (RRMC) and then graduating from the Royal Military College of Canada in 1996 with an undergraduate degree in Chemical and Materials Engineering. Upon completion of Military Engineer training in Chilliwack, he served in 1 CER, CFSME, 2 CER, and finally 4 ESR as the Commanding Officer in 2012.

Colonel Ayotte’s international deployments have been to Kosovo with Operation KINETIC in 1999 and Afghanistan under Operation ARCHER / ENDURING FREEDOM in 2005/06.

Colonel Ayotte is a graduate of the Australian Command and Staff Course in 2010 and the National Security Programme at CFC in Toronto in 2017.

His dad, 7330 Roger Ayotte, a former RCAF pilot, also started his military college career at RRMC before being a proud graduate with the Class of 1967 at RMC.

First impression by a cadet:

On May 19, 2017, about an hour after the graduating cadets marched through the arch, I had my first introduction to Col. Ayotte, the incoming Director of Cadets. I was walking into town for lunch with three graduates and as we passed the bridge, the Col caught up to us, on his way to a lunch as well, introduced himself, and asked about summer plans and upcoming postings. Even in such a brief encounter, it was evident that he was looking forward to his new position and that he would take an interest in the cadets and their success.

Name withheld to protect the guilty…