“What are you doing for Reading Week?”

This upcoming Reading Week will see many students, staff, and professors, take full advantage of the class-free week. Here’s what some of the RMC community will be up to:

“I will be spending quality time with my pet cats, grilling on the barbeque, and practicing my bagpipes.”

“I will be enjoying my vacation in company of cadets who cannot go back home during Reading Week. We will be testing our skills and resourcefulness in an escape room. I can’t wait to spend some time with my two dogs, Storm and Logan. We will be playing in the snow and watching movies together. Although I will be on vacation, I will have to do a little work to make sure that everything is perfect for the amazing cadets in upcoming events such as Concert in Scarlets, Sunset Parade, and little gigs here and there.”

“I am going to British Columbia to visit a Navy friend. I am looking forward to enjoying the beautiful sites.”

“Since I am First Year Advisor for Arts students, when classes are in session I like to be on hand for whenever they might drop by; this means I usually leave the house when the rest of my family is still asleep and don’t get home until supper time. During Reading Week, I’ll be doing some of the usual – marking essays and writing a conference paper – but I’m also looking forward to coming in a little later and doing some work from home: it means I get to have breakfast with my kids!”

“I will be going on the Battlefield Tour over the Reading Week with a selection of well deserving RMC cadets and staff.”

During reading week I will be staying at RMC, and I plan to get caught up on homework and other little things like the second year medical exams. I hope to also have time to practice some music and do some reading. I am sure it will be a relaxing change of pace.

For the reading week I will be traveling with members of the RMC sailing team to St. Petersburg,Florida for a sailing clinic. We will have the opportunity to learn from sailing professionals both on and off the water. As well, we will compete with other schools in a regatta.

OCdt Seed 28116 and myself (OCdt Deguara 27912) are travelling to Hawaii for the length of reading week with another friend of his, also in the military. We plan to go hiking around Oahu, snorkeling the waters, and surfing the waves. This will be first of the many trips we plan on taking over the time we are at RMC.

This reading week I am excited to travel to Zephyrhills, Florida, with a group of other RMC cadets for the annual sport-parachuting trip. Over the course of the week we will have the opportunity to obtain our solo (or A level) parachuting qualifications.  As we have already been fortunate to spend some time on theory (and practicing freefall technique in the wind tunnel) at SkyVenture Montreal, I look forward to applying these skills and – of course – having fun!

I am trilled to be taking part in the expedition trip to Quebec City this reading week. We will be ice climbing the Montmorency Falls as well as learning other winter and mountaineering skills. I am very thankful for the RMCC Foundation and the RMCC Expedition Club for funding this excursion! 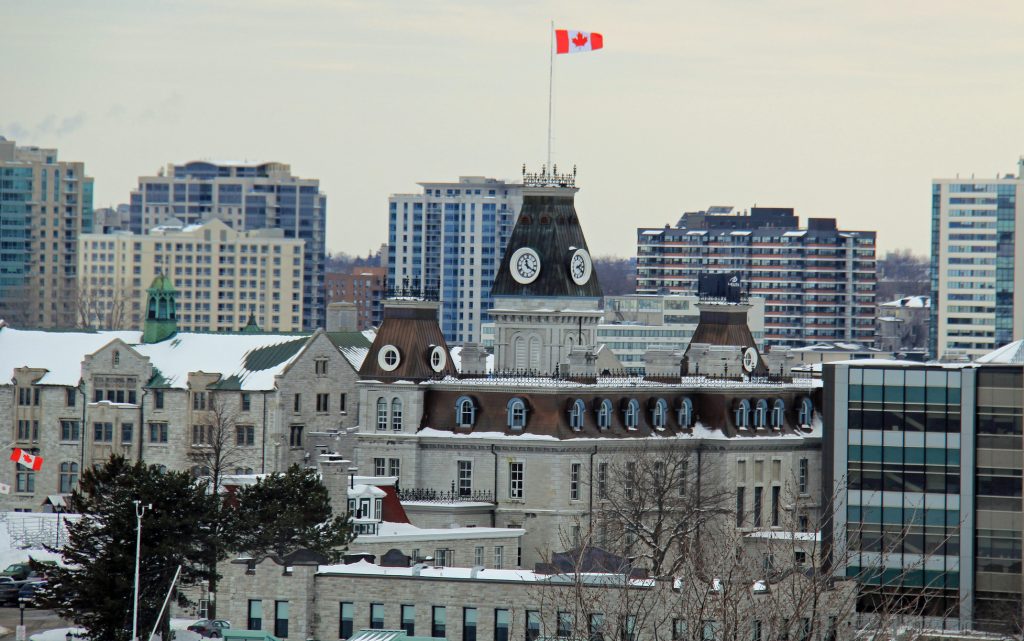 The first period of the first years PMT was a brief on after action reports (AARs).

It was very informative about what an AAR is, the parts of an AAR, why is each part is important, and the purpose of an AAR. The next part of the brief was about the types of AARs and the difference between them, what environment to conduct them in and when it is appropriate to conduct each type of AAR and how they help the learning process.

The final part of the brief was about what the four steps of the AAR are. It was very interactive, engaging and encouraged the cadets to participate. Everything was explained clearly and in a way that was easy to understand and remember.

The second period was an informational brief about the Kingston military family resource centre. They discussed the purpose, role, and impact of the KMFRC, as well as who they serve and the services they offer. They gave a detailed explanation of how they assist military members and families and many examples of how they can assist after RMC and later on in our military careers. They effectively made the cadets aware of the resources available to them and the contact information should we ever need it. The two briefs were both very useful and informational as well as engaging.

On Wednesday, February 15, 2017, the second year class met in the New Gym to discuss leading Physical Training sessions in the Canadian Armed Forces. The lecture was led by the 11 Squadron NCO, Sgt Fancy.

To start the briefing, the sergeant reinforced the importance of physical fitness for officers. He told the Class of 2019 that in order to lead PT, an officer must obviously be able to set the example for his/her troops. As the sergeant put it, “you can’t lead a run from the back.”

He continued the lecture by telling the OCdts that, from his experience, young Lts are often tasked with planning and leading PT lessons. He told us that at his Combat Engineer unit, even the CO would lead PT once a while, meaning that this is a career-long skill. Leading a PT session may sound easy, but, as the Sgt informed, there are some things that one must consider.

First and foremost, safety must be taken into consideration when leading PT. An officer must make sure that the PT that they are planning mitigates the potential of injury, use markers on runs and be aware of injuries that may occur during the PT.

He also spoke to the simple process of running a PT session, namely starting with a warm-up related to the exercise, making sure that the actual workout is thought out and ending with a cool down.

As future officers, many of us will end up leading troops in PT sessions. As such, we must always keep the importance of physical fitness in mind and always work to improve ourselves.

The class of 2018 was given a presentation by Maj. Alamy on the creation of operations and directives planning.

The lecture was given in great detail and fed off of more rudimentary concepts taught during BMOQ, and the majority of the third years had not been exposed to such materials since, so it served as not only a good review, but a solid preparation for training courses in the near future for many, and for others, a realistic snapshot of daily life in their military occupation, especially for the combat arms.

Cadets were taught the procedures of battle planning, the importance of knowing the steps of orders writing so well that they will have to rely on nothing but mental calculations and instinct, and were shown realistic examples of scenarios in which they will encounter this common format of command and operations planning in every day life after the college.
-OCdt Bruce, 27472

On Wednesday, February 15, 2017, the Fourth year class met in Currie Hall in order to receive a briefing in regards to moving to future postings. The briefing was led by Brookfield global which provides moving service for the Canadian Forces. This briefing was very informative for all fourths years. As there was many particular cases for all cadets moving across Canada the briefing lasted 1 hour and was then followed by a question period. This briefing proves to be one of the many preparations our fourth years must take before leaving the college.

The Varsity Blues took home gold in the Men’s Epee Team Relay event and silver in the Sabre, claiming the OUA banner for a second straight year.  Toronto finished first with a total of 254 points, while Carleton (230) and RMC (173) brought home overall silver and bronze medals, respectively.

Women and Men wrap up their seasons Friday at Brock & Saturday at McMaster. Women start at 6PM and the Men 8PM – both nights.

Developing Future Leaders: My Trip to USNA for 2017 Leadership Conference