Professional Military Training: 4 great presentations set the tone for the remainder of the school year: 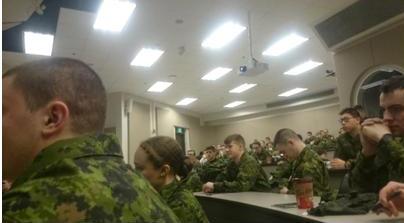 The first years PMT was a very informative and important brief about summer training and the claims and pay that come with it. The administrative team from the COR explained in detail how the pay system for summer training works, from TD to field and sea pay, as well as how they organize the travel to and from the place of duty to the place of temporary duty. They also gave helpful tips on how to make sure we get the money we earned, such as how to track field/sea pay, the importance of accurate itineraries, the steps to complete our claims, and many others. They explained how the busing system works and how pay is different if you take a Private Motor Vehicle.

Finally they finished off with the contact information for our travel correspondents, and where to find the information they just presented us.

It was all explained very well and the information was easy to remember for the next time we need it. 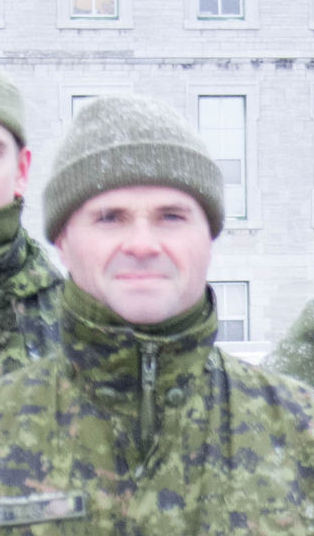 This Wednesday, the class of 2019 participated in an exchange briefing led by the Deputy Director of Cadets, Maj Neil Trask (photo left)  in the Sawyer Theatre. The briefing was dynamic and engaging and gave the cadets a good idea of what going on an exchange entailed.

The major began the presentation by telling us about his experience working with foreign military members in other places around the world and how international co-operation is key for the Canadian Armed Forces. He told the second years that going to one of the foreign military academies is a good place to start learning to work with international allies.

Every year, 13 cadets are picked to attend 6 different military schools around the world, including France and Germany. Seeing as the participants who are chosen for exchange are representing RMC, the DDCdts informed the Class of 2019 that he would only pick the most deserving applicants.

By the end of the presentation, many in the room were thinking of participating in an exchange and having the chance to attend another military academy for a semester. 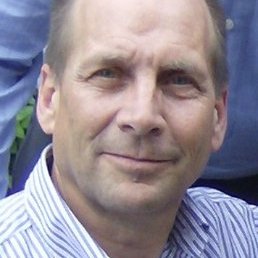 The Vice President of SISIP (Service Income Security Insurance Plan), Pierre Goulet (photo right) addressed the Class of 2018 in the New Gym on the morning of 01 Mar 2017.

Pierre stressed that much of SISIP’s profit goes back into the military community and provided many tips with the officer cadets on how to efficiently save towards financial goals. As well, the various free financial planning services provided by SISIP were made aware to the LL3s.

Overall, the briefing proved informative as the Class of 2018 edges one year closer to graduation.

The 4th year class at the Royal Military College of Canada participated in an Operation Honour briefing this week for PMT. 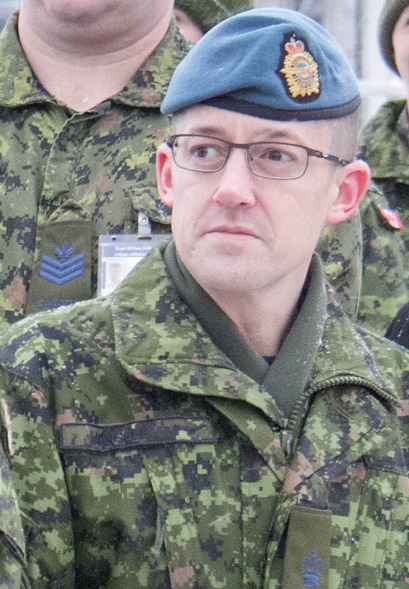 Warrant Officer Ansell (Photo left) gave an interesting briefing to the class focused on how to give the lower year classes effective briefings on Operation Honour and how to answer some of the expected questions.

The concept of having 4th years carry out briefings for the 1st, 2nd, and 3rd years began last year with many people giving positive feedback.

The 1st years will be introduced to Operation Honour, the 2nd years will be focusing on the subject of consent, and the 3rd years will be given training on bystander awareness. This is the continuation of that.

Training 4th years to give briefings on this sensitive topic also helps prepare us for life after RMCC where we will likely be expected to give similar briefings.

A small group of 4th years also underwent bystander awareness training which will allow them to pass on specific knowledge to the 3rd years.

The Operation Honour briefings for the younger years will be conducted over the next 3 weeks. 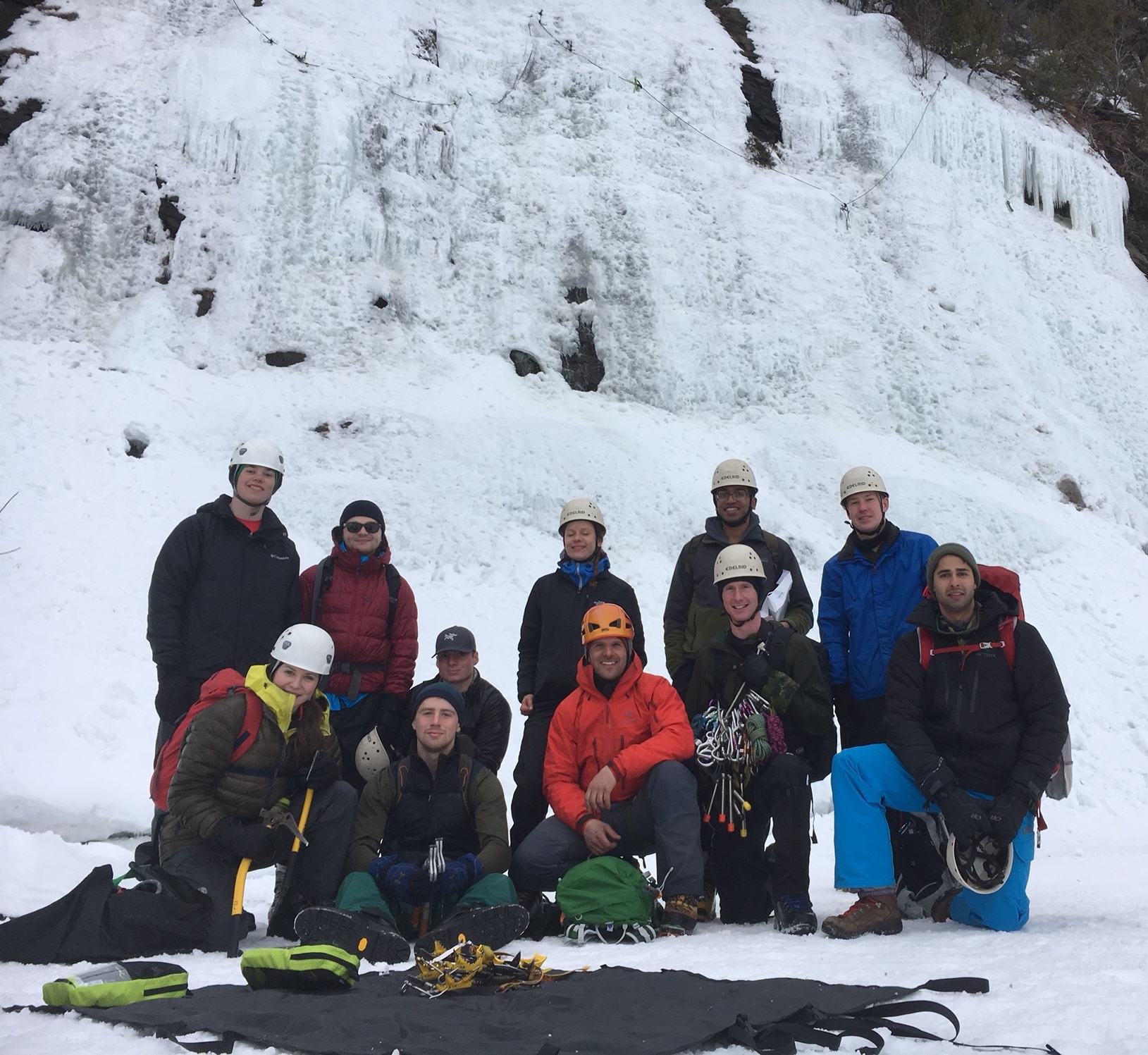 The RMC Expedition Club had another exciting trip planned for reading week 2017. Organised by OCdt Carmen Kiltz and led by MWO Corneau, ten selected cadets were headed to Quebec City for an ice climbing expedition. After an application process which vetted for physical fitness and experience, the team was preparing for a truly challenging and unique experience.

Two meetings were held to help plan and organize the trip. The team was introduced to the sport of ice climbing and the general goal of the expedition. For leadership training, members were assigned team jobs like first aid, gear coordinator, and individual day leaders.

Of course, with any successful military mission, there are rehearsals. For our purposes, we linked up with the RMC climbing club to conduct a training session. Here the team learned the various principles related to climbing like: harnesses, knot tying, belaying techniques and safety. With all preparation confidently completed, we were ready to face this new challenge.

With freshly baked goods made by OCdt Kiltz, we were all packed and ready to go early Monday morning. We drove for about seven hours making occasional pit stops along the way. Finally, we reached our destination-Quebec City-where we stopped at the local Mountain Equipment Co-op to rent our gear. With all our gear and a long day of driving behind us, it was agreed upon that we needed a hearty meal. MWO Corneau, who was quite familiar with the area, led us to a wonderful Italian restaurant called “Pacini”. After dinner, we headed to our final destination of the day: CFB Valcartier.

Our first day of ice climbing began with training. We arrived at Montmorency Falls (Chute Montmorency) early Tuesday morning. To our surprise the falls were so vast and high, creating a sense of intimidation, but also amazement by the sheer natural beauty. The team was introduced to Carl Darveau, our guide, who was a local expert and firefighter on the base. He showed us how to put our crampons on and explained a few techniques to us. With that, the team was finally ready to climb. Here two by two, cadets traversed up the side of the cliff, swinging and digging their ice tools. As we became more proficient some of us took over the belay responsibility. Soon our confidence increased and we felt ready to tackle the new, more difficult route. Near the end, it was almost straight vertical, but we enjoyed it a lot more.

In the evening after dinner, we all headed into the city for some sight-seeing. Under the guided tour of MWO Corneau, we visited various historical sites like: The Plains of Abraham, General Wolfe’s statue, Old Quebec City and the Chateau Frontenac.

The next day, our new found confidence was truly tested. The new climbing site was called Chute Kabir Kouba located in the town of Wendake. Situated on a river bank, the ice descended from a cliff reaching about 30 metres and at first glance did not seem like much. With the lines set up, the first climbers were ascending the cliff. To their dismay, the tools were not breaking the ice as easily and what once was achieved yesterday, would not be so easily attained today. Today’s ice was much harder despite the recent warmer weather, and a more technical approach to climbing was needed. We quickly learned to strike precisely and look for natural cavities in the ice to hook rather than strike. Our flexibility and muscle endurance was challenged consistently. In the beginning, many of us had to come down before reaching the summit because all the energy was gone from our arms! We learned how to take breaks while climbing, and how to make our moves count. We ended the day with the majority of people feeling really tired, but equally accomplished.

Unfortunately, due to the warm weather, it was our last day of climbing because the conditions were too dangerous for anyone to be climbing thereafter. On our last day, some of the team went indoor rock climbing and others enjoyed cross country skiing at Centre Castor. Friday we returned the gear and made the journey back to RMC.

Everyone returned home safely and with a sense of pride. For many people, climbing is as challenging mentally as it is physically. To overcome a fear of heights, falling, and learning to trust your equipment has shaped us in more ways than one. This trip provided us with an adventurous and rewarding experience making us more confident leaders. The Expedition Club would like to thank the RMC Foundation for all their financial support and dedication in the pursuit of excellence.

Training on this class of vessel is critical for the team’s development and success, since it is this style of keelboat that is used at the Student Yachting World Cup and the CISM World Games, both goals the sailing team has been enthusiastically working toward. 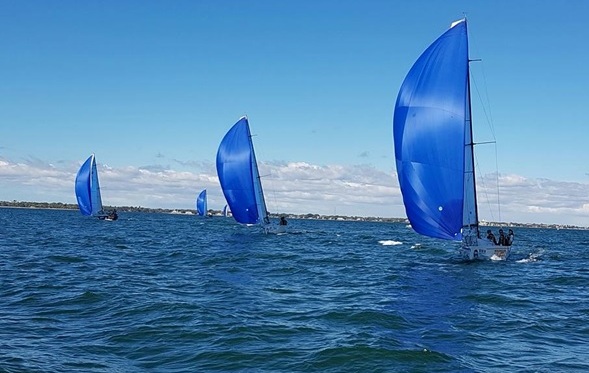 Throughout the two-day clinic, Josenhans led discussions on various topics such as meteorology, upwind versus downwind speed techniques, various starting procedures, asymmetrical spinnaker handling, optimal sail physics, and advanced racing tactics.  After each lesson, theory was applied on the water and captured on video to revisit during the debrief.  Together, they analyzed boat positioning, adjustment of sails based on wind characteristics, and areas for tactical and strategic improvement in each scenario. Everyone was in agreement that the two days spent with world class coach Josenhans was invaluable for developing their proficiency as competitive sailors. 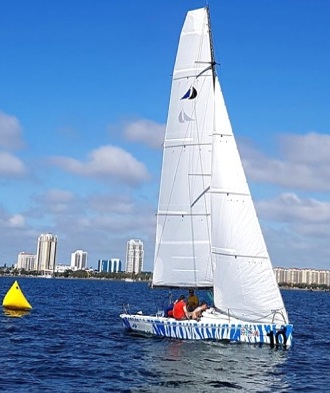 The remaining three days was an opportunity for the teams to apply their new knowledge and formulate strategy against each other under the intensity of racing conditions. Although the first day started with disappointment due to a thunderstorm in the forecast, the teams used the morning to examine procedures for heavy wind sailing and emergency evolutions, as well as refresher lessons from the previous days. The afternoon off the water granted the students an opportunity to visit some of the local sights in St. Petersburg.

The weather conditions on Thursday were a sailor’s delight with sunny skies, winds of 8-12 knots, and a high of 25 C. The RMC team led the regatta off strong with an extremely close 2nd place finish for the first race. They were consistently first off the dock, every professional racer’s objective for extra practice prior to the start of race, and continued to be strong contenders throughout the day against all rivals.

Overall, it was an excellent week for a crew that had never sailed together on asymmetrical keelboats. Throughout the week the team continued to improve, and after seven races completed over three days, RMC’s third place finish represents the best result at a CICSA event. The substantial amount of skills and knowledge gained has helped position the RMC keelboat team for championship placements next season and has also sharpened their focus towards becoming qualifiers for CISM World Games.

The team would like to thank the following key players for supporting this cadet funded event: coach MCpl Todd Ward, the impetus behind this pilot project; team manager Lt(N) Jennifer Fidler, who endeavoured to minimize costs through sponsorship efforts and logistical coordination; and PSP Athletics, for their ongoing support.

Foundation helps to send scarlets off to Washington & Ottawa