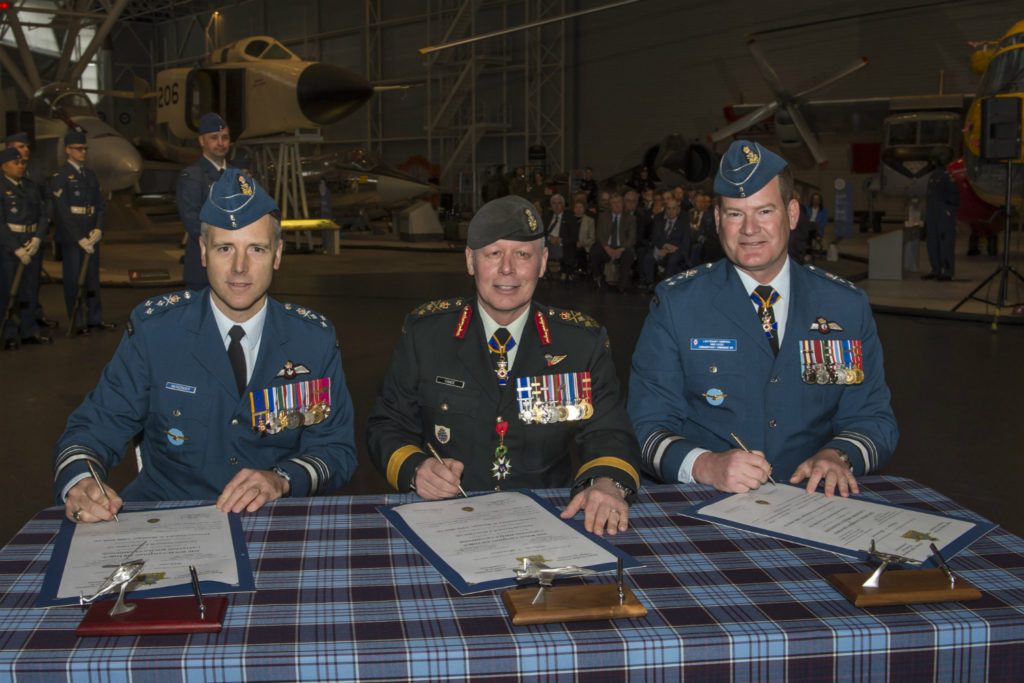 Caption: Command of the RCAF changed hands on May 4, 2018, in Ottawa. From left are incoming commander, LGen Al Meinzinger; Gen Jonathan Vance, chief of the defence staff, who presided over the ceremony, and the outgoing commander, LGen Mike Hood. Cpl Alana Morin Photo

‘Zinger’ takes over as Chief of the Air Force

We had the honour of attending the Change of Command (CoC) of the Royal Canadian Air Force and the appointment of the Chief of the Air Force Staff this past Friday (4 May) at The Canada Aviation and Space Museum in Ottawa.

The museum is located in Ottawa very near the site of the of the former RCAF / CFB Rockcliffe base where we spent five great years from 1965-70.

Rolande, had other commitments, therefore, she was unable to attend. Consequently, one of our daughters, LCol Marie Oliver Norris handled the pinch-hitting duties with a game winning grand-slam.

We have known Al since we were on his paper route when we lived in the PMQs on the South Side of CFB Trenton in the early to mid 1980s.

The SS Recreation Center was located pretty close to the PMQs. Al was a constant visitor; recognized by many from the PERI staff & others for being a pretty good badminton player. Ontario high school medal winner if I remember correctly.

I recall driving through Belleville one summer evening with a friend. He had an errand to do and it was near a ball-field. While he took care of his business, I watched these teenagers playing baseball. Turns out Al was the pitcher for one of the teams. Tall and lanky for his age, he threw ‘smoke’. I only watched a couple of innings but long enough to see him crack a line-drive double. Clearly a natural that had great baseball potential.

One thing, I definitely remember was being at a Blue Jays game around 1999. The late, great Hall of Fame pitcher, Roy ‘Doc’ Halladay was on the mound for Toronto it was his rookie season.

I said to Rolande. “This Roy Halladay reminds me a lot of Al Meinzinger when he was teenager, in the way, he throws his fastball.”

The following summer after seeing him play in Belleville there was no more baseball for young Al Meinzinger, he was off to Chilliwack and then RMC.

By coincidence, when he was entering III Year at RMC, we were posted back to the College. By then he was a standout with the hockey ‘Redmen’. I was involved only on the peripheral with the team but followed them very closely.

The goal ‘Zinger’ (his nickname from teammates) scored at West Point in the 1989 game in a tough 3-2 overtime loss still sticks out in my mind.

Also, I recall him being short listed in IV Year and a finalist for a Rhodes Scholarship. His consolation prize was being accepted into a Master of Arts in economics at Queen’s University.

Over the next 25 years or so, I would hear or read something about his career. Always good stuff!

In July 2013, ‘Zinger’ took command of RMC. He only stayed for two years as he was promoted to Major-General in May 2015, and appointed deputy commander of the RCAF the same year.

He was appointed director of staff for the Strategic Joint Staff in March 2017, and was promoted to Lieutenant-General just a few weeks ago.

The commander of the RCAF ensures that trained personnel, along with the necessary equipment and support, are available and ready to carry out air operations in Canada, in North America and around the world, when called upon by the Government of Canada.

As I was sitting through this elaborate and impressive CoC, I let my mind wander. What if Al had pursued a baseball career?

Perhaps, instead of sitting in The Canada Aviation and Space Museum in Ottawa, we would be in Cooperstown, NY at the Baseball Hall of Fame honouring his achievements on the ball diamond.

A few excerpts from the address by LGen Al Meinzinger: 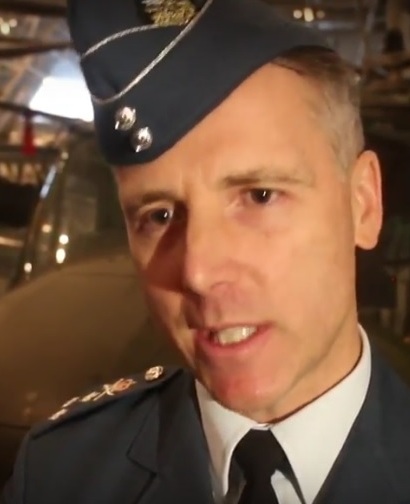 “If there is anything I have learned over the last three years while back in Ottawa, and certainly this past year, it is the criticality of flying in formation as a senior leadership and departmental team – and I pledge that this will continue under my watch.”

“As some of you may know, I became a member of the RCAF at birth in the Trenton Hospital, indentured for life . . . sporting blue RCAF diapers, entering this world with the roar of C130 engines overhead on final approach into CFB Trenton. Since then, I would suggest to you that my life has been marked by three distinct phases:

Phase One included a ten-year period as a Base Brat in Trenton, attending the Base school and delivering the local newspaper with my loyal brother David, all the while getting to know every nook and cranny of Trenton’s south side. Those were great days and I stayed mostly out of trouble…honestly… as I learned first-hand what it meant to be a part of a military family.

I began Phase Two as an 18-year-old bright eyed officer cadet at the Royal Military College, where I began to learn, what I now know, is the bedrock of our institution….values such as duty, loyalty, service . . .  and the importance of tackling challenges as a team, whether during military training, in the classroom, or on the ice.

“We must also continue to demand at all levels throughout the RCAF that we treat one another with the dignity, respect, and inclusivity that we recognize as being absolutely fundamental to our success as a family of professionals.”